Meet the founders connecting BIPOC youth to the marine sciences 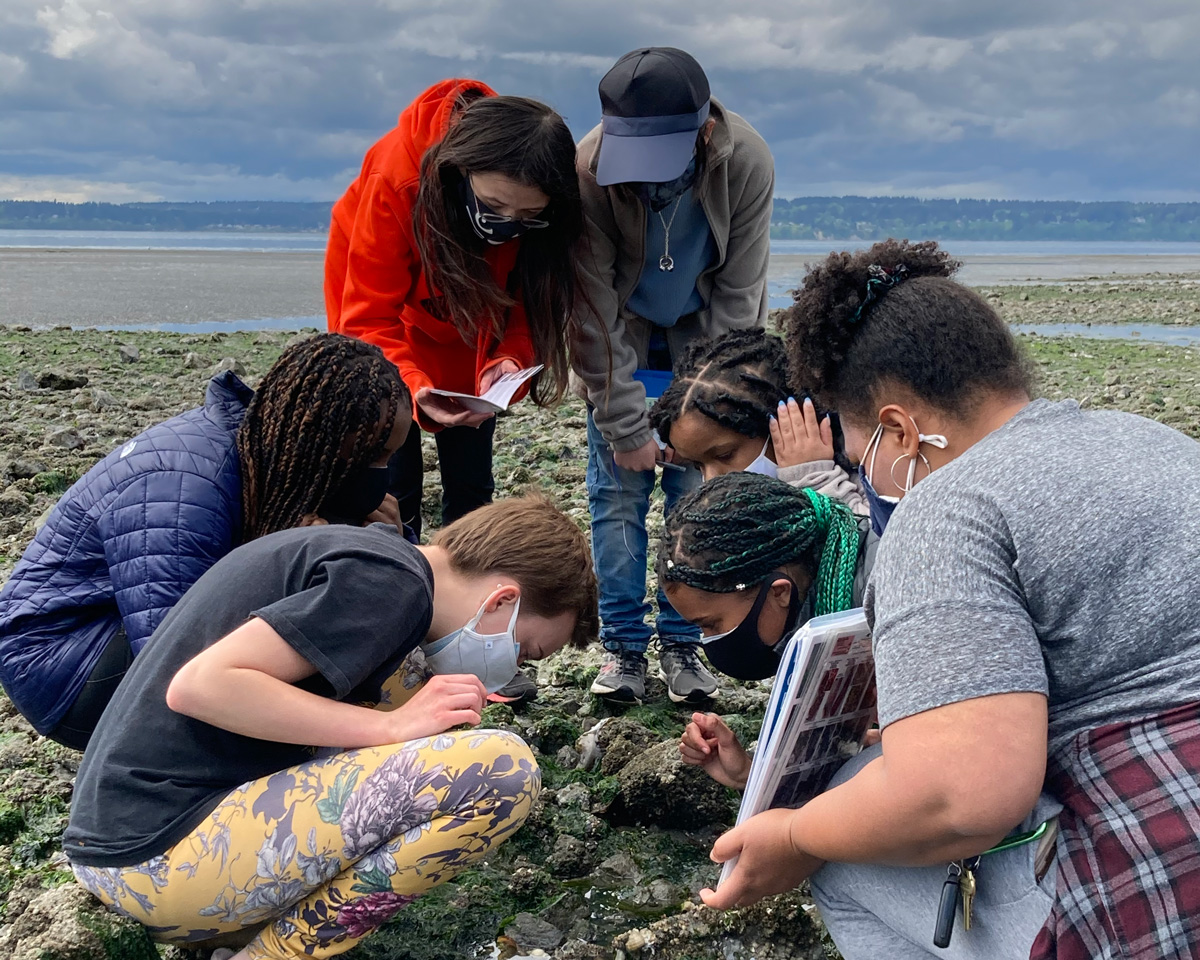 At Seattle’s Discovery Park, Savannah Smith and Ebony Welborn explore a tide pool with participants of a day program in collaboration with Young Women Empowered. (Courtesy of Sea Potential)

Throughout the United States, including in the West, communities of color have historically been left out of environmental organizations and movements. In Seattle, Ebony Welborn and Savannah Smith are looking to change that. In 2020, the pair, both Black women, co-founded Sea Potential, an environmental justice limited liability company dedicated to elevating Black, Indigenous and people of color representation in the marine sciences.

Since its inception, Sea Potential has organized field trips for BIPOC youth, taking them to rivers, beaches and lakes in the greater Seattle region. Wellborn and Smith believe in telling stories about the history of the places they visit, highlighting in particular links to BIPOC communities. Such activities can help connect young people to marine ecosystems, they said, and perhaps inspire some of them to pursue careers involving waterways.

High Country News recently spoke with Welborn and Smith about Sea Potential and the importance of creating safe spaces for BIPOC youth in environmental movements.

What made you both passionate about getting more BIPOC involved in environmentalism?

Ebony Welborn: I was born and raised in both Carolinas. Although I didn’t grow up on the coast, I’ve always been really passionate about marine ecosystems. Since I was a little girl, all my brother and I could do was play outside. I had a lot of positive experiences outdoors that made me want to continue pursuing environmentalism. Going through different internships and jobs, I was one of the few people of color in the organizations that I was a part of.

Savannah Smith: I grew up outside of Seattle and had a natural affinity toward the water early on. A family friend suggested that I become a marine biologist someday; I had no idea what that meant at the time. Somebody told me I could do it, so I was like, OK, that’s what I’m going to do. I went to Western Washington University to pursue my bachelor’s in marine biology. It was a big culture shock to me, because I was coming from a minoritized community and that was a predominantly white university. I really noticed the disconnect for BIPOC in environmental spaces.

I met Ebony after college, and our passions are so closely aligned that we felt encouraged to create this space for ourselves and for others.

Welborn: I was working at EarthCorps [an environmental nonprofit in Seattle] when Savannah joined. I think there were four Black women in this space, so when she came in, we connected instantly. We got asked this question: “If you could do anything in the world, what would it be?” And we both stood up and said, “We will connect BIPOC youth to the marine sciences.” It took some time; we don’t have a business background. But after the Black Lives Matter movement, we were, like, let’s go ahead and put our passions out into the world.

How did the Black Lives Matter movement catalyze Sea Potential?

Smith: We were both working as volunteer specialists at EarthCorps. The population we were serving was predominantly white and higher income, and it felt like I was pretending. I felt like I wasn’t serving my community at all, and it wasn’t really aligned with what I was truly passionate about.

Why is it important to get BIPOC connected to the environment, especially from a young age?

Smith: The key is being able to feel comfortable. If it’s a predominantly white space and white individuals are guiding the narrative or the experience, it can be uncomfortable for people of color. I think that’s why our organization has stood out.

We offered a BIPOC beach walk last year, and folks were very excited about that. We had a wonderful time together. At the same time, we received a lot of backlash from non-BIPOC folks — violence and threats from people about us even having that event. That really just affirmed that these spaces need to feel safe. And if we’re not feeling safe, we’re not going to want to engage.

Welborn: It’s not that BIPOC have never been connected to the environment. We have rich histories — specifically around water, too. We’ve just been disconnected in the last century.

Can you share more about these rich histories you talk about, Ebony?

Welborn: I can talk specifically about the Black community. As I built knowledge about our ancestral history around water, I learned that Africans that came to America after the slave trade had this rich ability to swim.

Smith: [In Africa] women used to dive for cowrie shells and collect them to be used as currency in the community. At the time of enslavement, Africans were the strongest swimmers in the world, and Europeans rarely knew how to swim, so Africans were able to use their ability to swim to buy their freedom by taking on jobs like salvaging shipwrecks or saving drowning Europeans. We learned this from Kevin Dawson's book Undercurrents of Power: Aquatic Cultures in the African Diaspora.

Welborn: But during the Jim Crow era, swimming pools were segregated. If Black people were in bodies of water, they were usually very polluted. There were lynchings that happened around water. This negative connotation with water developed within our communities. But if you look further back in history, you see there’s really positive experiences. That exists within lots of communities, but has been affected by capitalism and colonialism.

There can be a lot of focus on trauma and these negative impacts. It’s important to acknowledge, but sometimes I think it can make BIPOC feel really disconnected from the water and from the land. We want to tie in some of that history, that connection to water and land, that has been positive.

What makes the Puget Sound region ideal for you to teach these themes around environmentalism and marine conservation?

Smith: We have so much water around us, even in the city. Even if we haven’t grown up going to the beaches or really engaging with water, we at least have seen it at some point driving around. It’s a really easy connection.

Welborn: This is also where we are. We include rivers, lakes, oceans, streams and even rain.

We have been working predominantly with youth from south King County so far, but we’ve been expanding into Tacoma and have intentions of being more national or international, eventually.

How can you tell that Sea Potential is making a difference?

Welborn: We get good feedback from our youth, that they feel supported and safe to be themselves. We see that they aren’t shy when they go into these new environments. Our youth come back and want to continue in our programs. We hear from the community that they appreciate the work that we’re doing.

What would you like to say to other individuals who are passionate about representation and environmentalism in the West and want to start programs similar to Sea Potential?

Welborn: Don’t hesitate to do it in whatever capacity you have. If you’re a student, maybe you can engage in that on the side during weekends, or make it a part of your school projects. If you’re an adult and you want to start a program like this, find community members that will support you.

This story was originally published by High Country News on March 18, 2022. 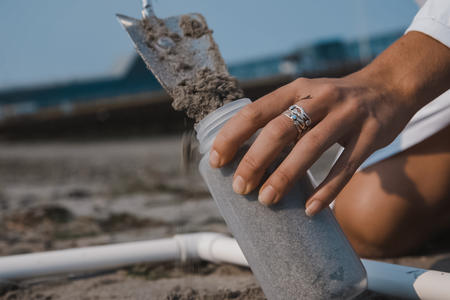 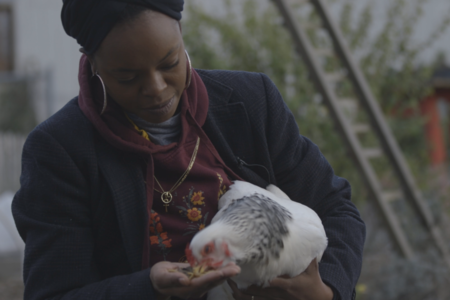 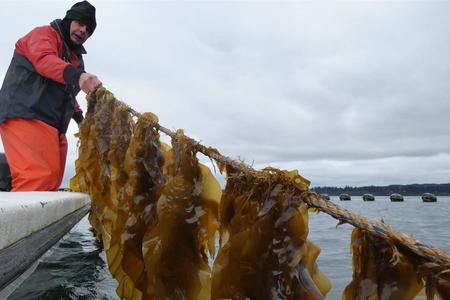 Like much of the West Coast, the state needs a regulatory overhaul if it wants to take advantage of emerging ocean aquaculture.

by / March 29
Article continues below

Like much of the West Coast, the state needs a regulatory overhaul if it wants to take advantage of emerging ocean aquaculture.

Wudan Yan is an independent journalist based in Seattle, Washington. Read more about her work at www.wudanyan.com and follow her on Twitter @wudanyan.