A new Yakima office aims to give workers and immigrants a place to gather, share information and organize. 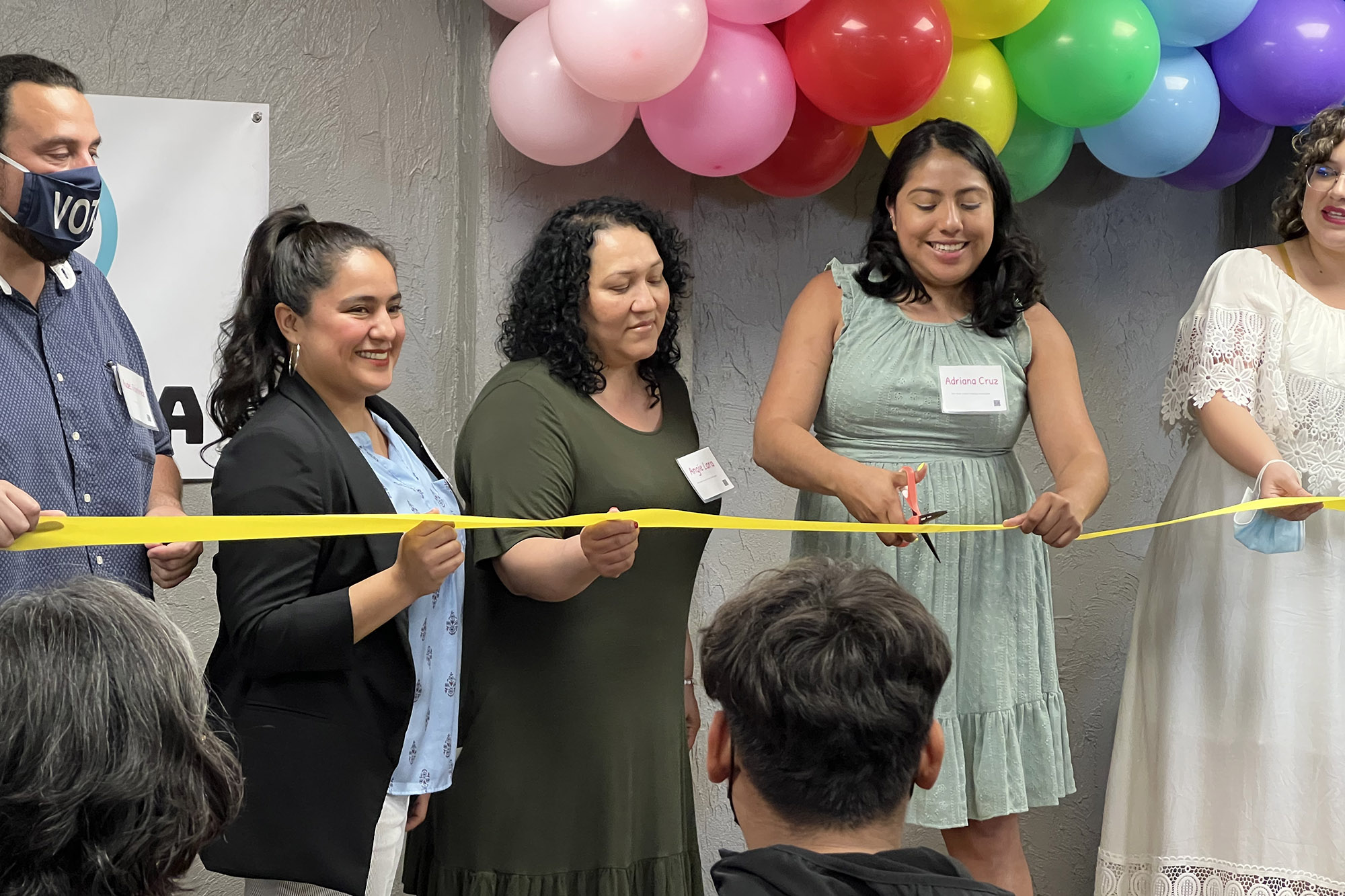 From center left, Dulce Gutierrez of the Washington State Labor Council and Angie Lara and Adriana Cruz of the Fair Work Center hold a ribbon to commemorate the opening of Centro Chinampa, a worker and immigrant rights center in Yakima, on June 15, 2022. The facility aims to provide a place to organize and build a community centered on immigrant and worker rights. (Mai Hoang/Crosscut)

In 2020, Angie Lara was among a group of Allan Brothers workers who went on strike over COVID-19 safety concerns.

The strike at the upper Yakima Valley fruit-packing house would spur strikes at several other plants, where workers pack and ship produce for growers. For several weeks in May and June, dozens of workers marched outside their worksites, voicing their demands for more masks and protective equipment, as well as hazard pay for working during the pandemic.

Lara, who worked as a sorter and packer at Allan Brothers, said she had to learn about worker action and organization on the fly. Few agricultural workers were part of unions, and public demonstrations have been rare in recent years.

“We didn’t even know what we were getting ourselves into,” she said.

The center’s opening comes as labor and community organizers seek to help agricultural workers sustain the momentum of the 2020 strikes, which won workers temporary pay raises during the height of the pandemic and an opportunity to voice concerns directly to employers through newly formed worker committees. The strikes attracted widespread attention from labor advocates and the public.

Advocates, however, said that many other agricultural workers in the Yakima Valley and beyond — from those picking fruit in the fields to those sorting and packing them in plants — still don’t fully feel at ease demanding better working conditions.

“I think we still have a long way to go in building worker power,” said Edgar Franks, political director of Familias Unidas por la Justicia. The Burlington-based farmworkers union worked closely with the striking Yakima Valley fruit-packing house workers during the strikes and for several months afterward. Franks said he would like to see more consistent labor organizing in Eastern Washington as many agricultural workers live there.

Indeed, while the new Yakima center aims to serve all workers, it focuses on those in the agricultural sector. The center’s name, Centro Chinampa, is a reference to the ancient Anahuac community chinampas floating gardens in what is now part of Mexico.

The Fair Work Center has had a presence in Yakima — and statewide — for many years, said Executive Director Danielle Alvarado. The turnover in the agriculture industry meant that interactions were limited to providing information about rights to a healthy and safe workforce.

The organization’s leaders wanted a way to sustain relationships with workers in Eastern Washington and train them to lead their own movements, she said.

“We’re building the power of workers to address that [power] imbalance,” she said. “Workers have to lead our work.” 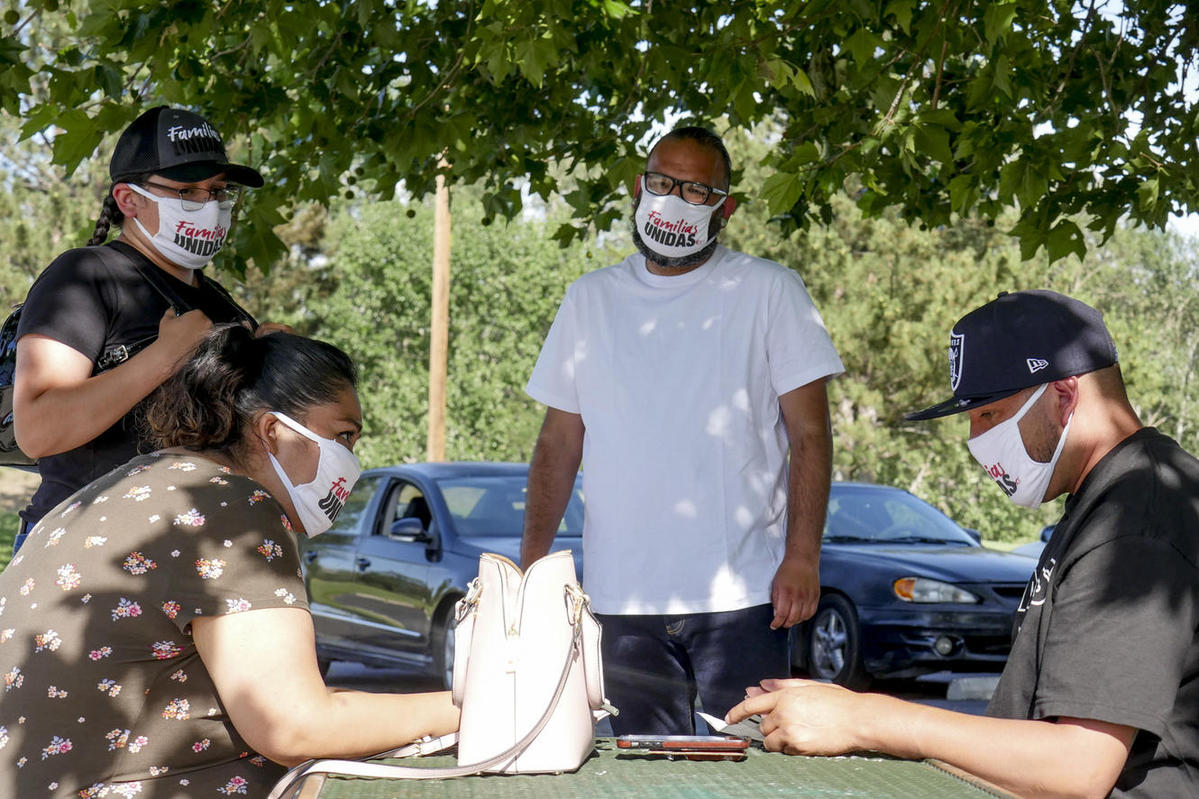 The pandemic, in general, has driven organizing from frustrated workers bearing the burden of being “essential” workers without improving working conditions or pay.

The main similarity is that concerns have likely built up over years, and the pandemic finally spurred workers into action.

“People are willing to grab that power and use it,” he said.

However, many agricultural workers face additional challenges, including exclusion from collective bargaining protections under the federal National Labor Relations Act.

That doesn’t mean farmworkers cannot organize. There have been a few successful unionizing efforts, but the lack of protections make the process more difficult, said Elizabeth Strater, who oversees strategic campaigns for the United Farm Workers, which represents workers in California, Oregon and Washington and also advocates for state and federal policies that improve working conditions.

Even when workers are protected while unionizing, that doesn’t guarantee success, such as winning employer recognition or a contract, said Franks of Familias Unidas.

After an unsuccessful vote for union representation among all Allan Brothers’ employees several months after the strikes ended, the newly formed Trabajadores Unidas Por La Justicia union filed several unfair labor complaints with the National Labor Relations Board. The board agreed with the union that the company hindered organizing efforts and allowed a second companywide vote.

The company denied it had hindered organizing efforts, and a second vote was never held. Franks said that, over time, the company was able to chip away at its workers’ momentum.

Lara, who had worked at Allan Brothers, said the union organizing effort showed her the underlying issues that make unionizing tough, including retaliation.

“People are intimidated,” she said. “People don’t want to deal with the harassment or the bad treatment.”

That intimidation is often tied to immigration status or poverty, said Dulce Gutierrez, a community organizer at the Washington State Labor Council, which works closely with unions.

Workers are less inclined to fight if they are at risk of being deported or unable to pay bills.

“It’s very difficult to draw a line and stick to it and not give in when you’re starting to see you can’t make ends meet,” Gutierrez said. “That’s where the employers have their advantages.”

Victoria Ruddy, the UFW's Pacific Northwest regional director, said the Ostrom workers’ concerns built up over several years, which prompted them to take action. They formed a committee and worked on a petition that outlined improvements, including higher wages and safer working conditions, and voted to be represented by UFW. Committee members are expected to meet with the company this week.

The UFW’s Strater said that while the difficulties and fear of retaliation remain, the resolve is there. 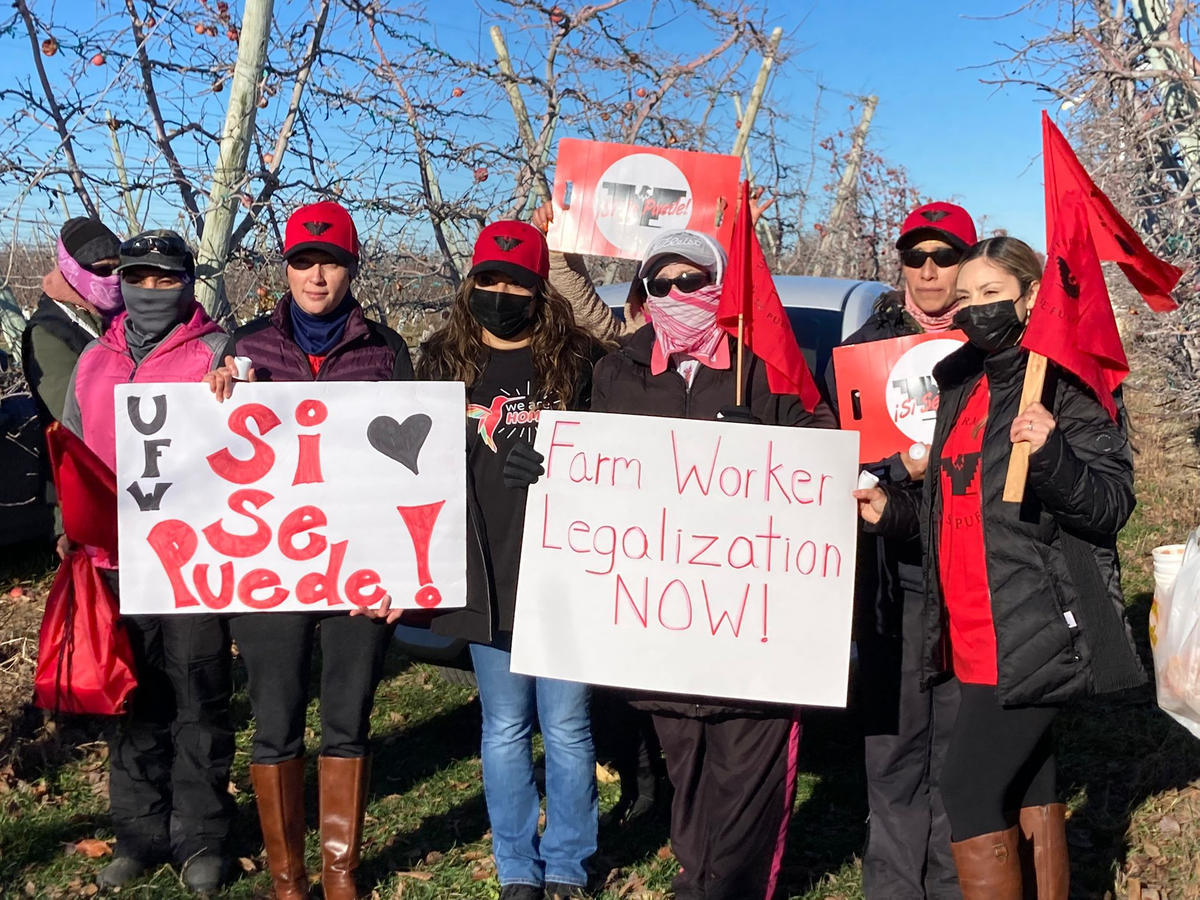 Dozens of Washington farmworkers hosted an immigrant rights vigil in the fields, where they worked pruning apple trees in below-freezing temperatures in Eltopia, Dec. 14, 2021. Farmworkers in the Yakima Valley and throughout the state remain diligent in organizing efforts, United Farm Workers officials say. (Courtesy of United Farm Workers)

Dozens of Washington farmworkers hosted an immigrant rights vigil in the fields, where they worked pruning apple trees in below-freezing temperatures in Eltopia, Dec. 14, 2021. Farmworkers in the Yakima Valley and throughout the state remain diligent in organizing efforts, United Farm Workers officials say. (Courtesy of United Farm Workers)

With many agricultural workers still far from unionizing, other outreach and organizing efforts become just as important.

Alvarado of the Fair Work Center cited a recent legal clinic in Yakima held in partnership with the Washington State Labor Council and the Latino Bar Association, which brought in some agricultural workers who had been reluctant to take much action. Alvardo said Fair Work Center staff, including Lara, had been educating these workers on their rights to a safe working environment but they were reluctant to talk to anyone about their specific situation.

Going to the legal clinic was a big first step for them and shows the value of building trust over time, said Alvarado.

“It’s that relationship building,” she said. “People have been so ignored and disrespected. We really have to earn people’s trust.”

And Alvarado believes the new Centro Chinampa building will provide a venue to foster those relationships. The center will not  be a venue only for events related to worker rights, but other necessary things for immigrants and workers, such as get-out-the-vote pushes and immigrant fund application clinics.

“We want it to be visible,” Alvarado said.

Brenner of University of Oregon said communities don’t lack institutions or organizations providing aid to workers, but there are far fewer venues to empower workers to take collective action.

“There’s no shortcut to it,” he said. “You got to go there and build relationships.”

Gutierrez of the Washington State Labor Council expects workers to keep speaking up, especially with inflation making it difficult to live on current wages.

More important, she said, the strikes two years ago provided a blueprint for action.

“They don’t have to look far in the past to know it was done before,” she said. “And there were victories.”

Still, such strikes often involve sacrifices, such as losing pay, which often means the demonstrations cannot be sustained long term.

That’s where building leaders among the workers is essential, Gutierrez said.

“That knowledge should be held in this [agricultural worker] community,” Gutierrez said. “They live here and will stay here for years to come.”

Lara remembers those early days of the strikes when she and her colleagues played it by ear and learned along the way. Over time, she became eager to use her newly-found leadership skills to support and build Allan Brothers’ union, and eventually have a broader reach to agricultural workers in the Yakima Valley and beyond.

She wants to help more workers feel empowered to take action and speak up. Lara believes with training, workers can overcome the fear of harassment and retaliation. In doing so, they can move beyond survival mode to demand better pay and working conditions to make sustained gains in agricultural worker rights.

“[I want to] give them the knowledge," she said. "That little push to think bigger.” 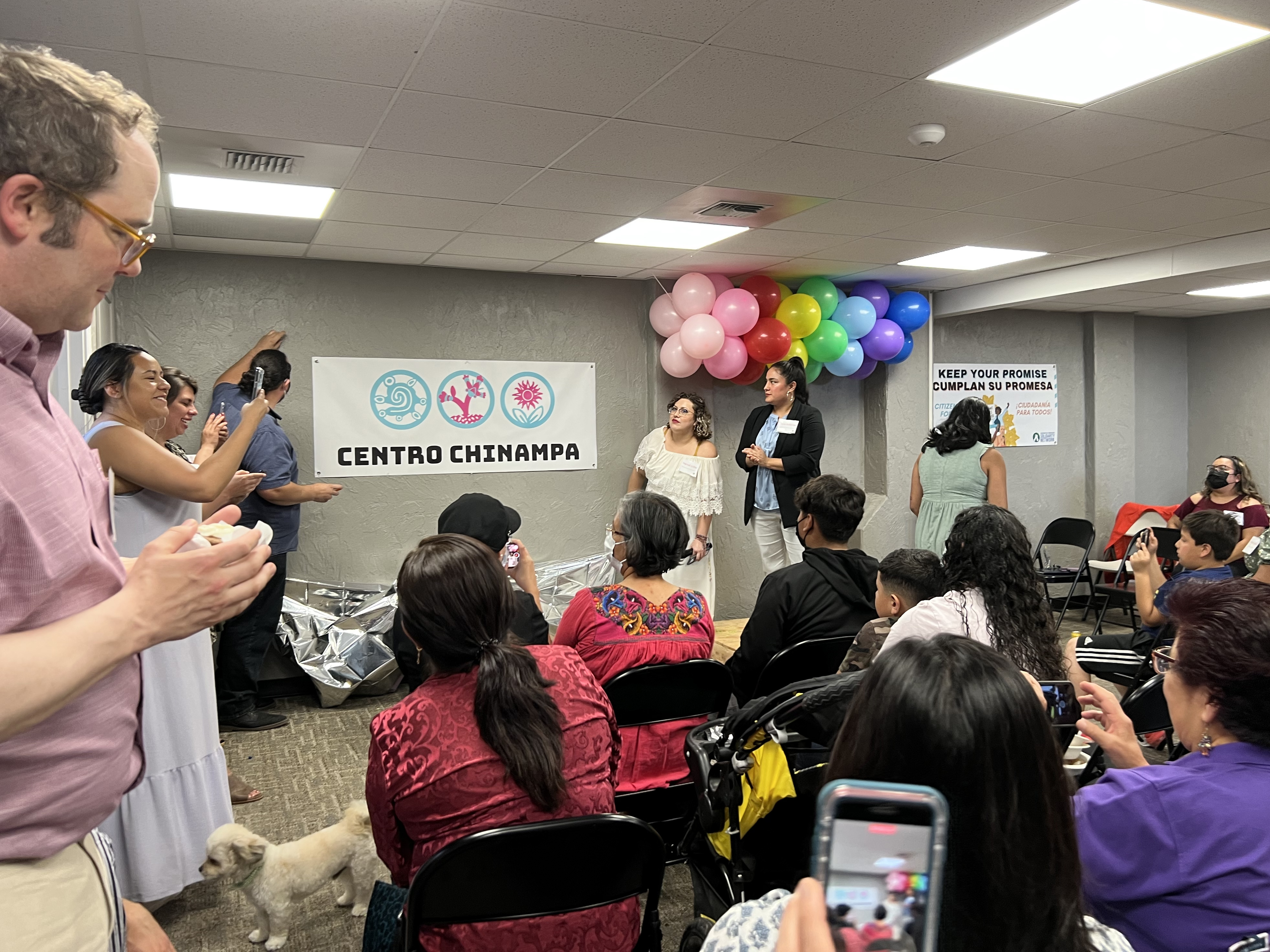 Labor and immigrant advocates reveal the name of a new worker and immigrants rights center in Yakima on June 15, 2022. The name, Centro Chinampa, is a reference to the ancient Chinampas of Anahuac floating gardens cultivated and cared for by the local community in what is now Mexican territory. Labor and immigrant groups seek to build on the momentum from worker organizing efforts in recent years. (Mai Hoang/Crosscut)

Labor and immigrant advocates reveal the name of a new worker and immigrants rights center in Yakima on June 15, 2022. The name, Centro Chinampa, is a reference to the ancient Chinampas of Anahuac floating gardens cultivated and cared for by the local community in what is now Mexican territory. Labor and immigrant groups seek to build on the momentum from worker organizing efforts in recent years. (Mai Hoang/Crosscut)