Is Seattle Children's living up to its antiracist pledge?

Some employees are happy to see the hospital make progress, but still want to see more. 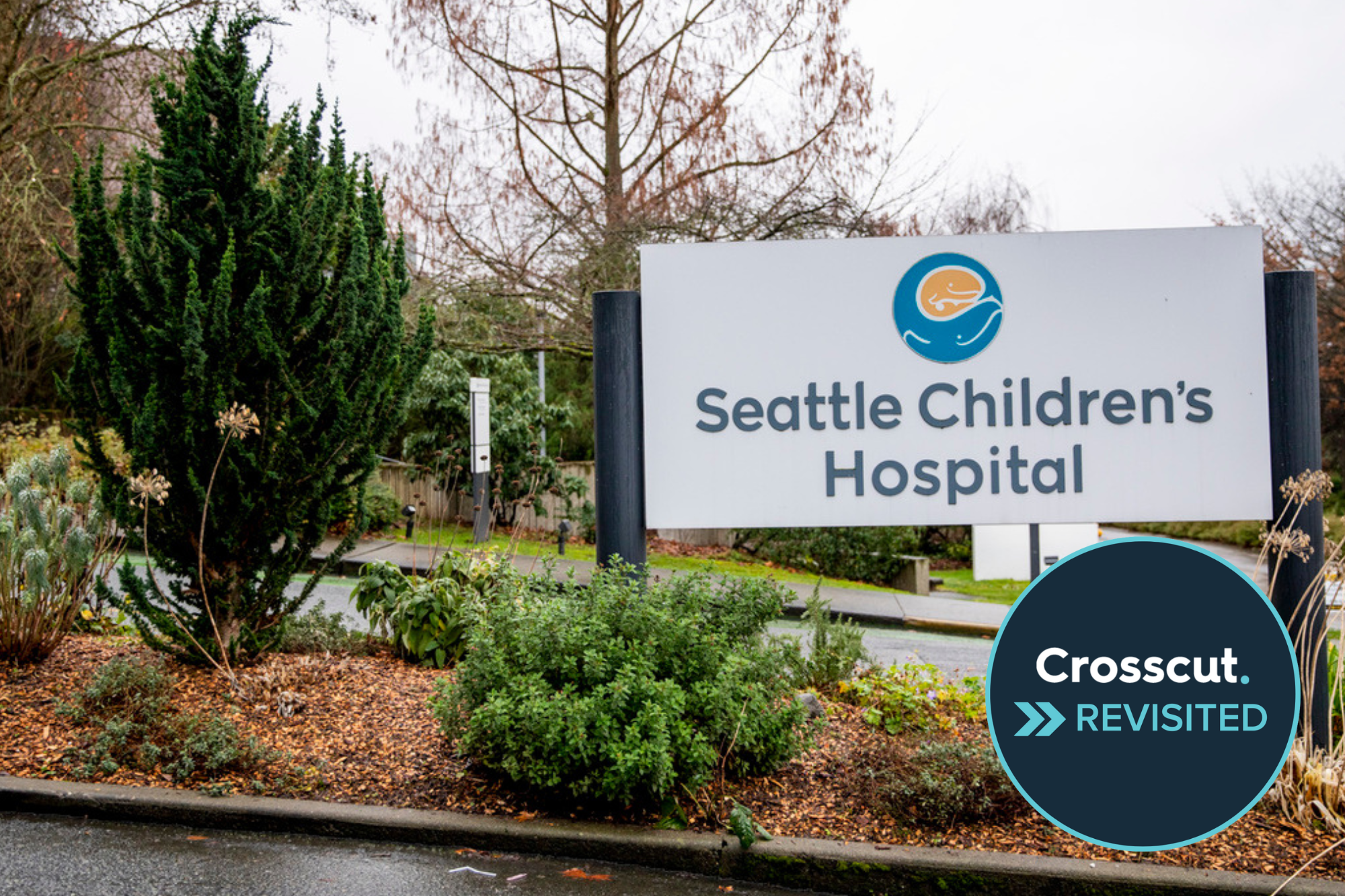 Two years after Dr. Ben Danielson, beloved leader of the Odessa Brown Children’s Clinic in the Central District, resigned while accusing Seattle Children’s Hospital of failing to address racism throughout its medical system, the hospital network says it has made progress in addressing those problems. Some people agree, but they still want to see more forward movement.

The hospital outlined in a recent report its progress and challenges in becoming a more equitable institution.

“This has been a journey and Ben Danielson’s resignation is a point in time of that journey,” said Alicia Tieder, the hospital’s senior director of Health Equity, Diversity and Inclusion. “This work did start before that. And we’ve been pretty committed to the antiracism work and framework and EDI work at Seattle Children’s for some time. And I think that we have some true outcomes.”

Employees seem pleased with the progress they’ve watched the hospital make. Still, some grievances linger for those who want more from Seattle Children’s. The hospital’s temporary closure of Odessa Brown’s Central District location – following the opening of the clinic’s Othello branch – added insult to injury for Danielson, who now works as a clinical professor of pediatrics at the University of Washington School of Medicine.

Staff continue to express concerns about what they consider a lack of transparency from leaders; the hospital’s failure to share the full version of an equity assessment of the institution; and its struggles to balance equity work with tending to patients.

“I feel like the hospital has dealt with this as if it were a PR problem,” said Danielson, a sentiment he also expressed to Crosscut last year. “And they’ve relied on something that is, sadly, very, very effective in this society. Which is just wait until people get distracted by other issues.”

The hospital took a massive reputational hit after Danielson left its ranks in 2020, but some are still hopeful.

Seattle Children’s tracks its progress on health equity and antiracism through quarterly reports, the most recent of which was published in September.

In it, the hospital outlined, for example, that it is currently meeting a goal of 40% employee racial and ethnic diversity. And the institution is replacing Code Purple, the intercom call for security and a mental health professional that historically has been used with Black patients at a disproportionate rate. (Seattle Children’s plans to launch the Behavioral Response Project, Code Purple’s replacement, in January, according to Tieder.)

The hospital also increased its score on a question in its Workforce Engagement Survey, which asks if the organization values workforce members from different backgrounds. Tieder said the updated score exceeded the goal benchmark.

Survey responses from January 2021 to April 2022 also reflect an increased confidence among workers that their managers and senior leadership are addressing racism in the organization, although they routinely expressed greater confidence in their managers.

From one nurse’s perspective, the hospital seems more open to talking about issues. The individual, who identifies as a person of color, asked not to be named for fear of professional repercussions.

“I don’t think that before [Danielson] brought everything to light, that people knew who are BIPOC,” the individual said. “Who knew what microaggressions were.”

The hospital’s report also explores ongoing challenges, including its lower-than-desired Family Experience Survey score and the disparity between its Latino patient population (19.1%) and its Latino employee population (7.7%).

In the report, Seattle Children’s specifically noted its struggle to recruit diverse nurses.

“Recruiting Black/African American and Latinx/Hispanic nurses continues to be challenging for the organization, especially given the limited availability of these diverse nursing groups in the Washington area,” the hospital wrote in the report. “Seattle Children’s is working on strategies to address this gap in its workforce.”

Employees continue to struggle with what they consider a lack of transparency from leadership.

“It is very strategic, it is what they want you to hear,” said Edna Cortez, a Filipina nurse who has worked with Seattle Children’s for more than 30 years. “I wish for more transparency, as a person of color.”

To some, the push for progress has also been obscured by the fact that the hospital tasked former U.S. Attorney General Eric Holder to lead an investigation into the hospital, but only partially released the assessment. The rest remains under lock and key. Seattle Children’s initially withheld investigation results, before partially releasing findings amid mounting pressure in August 2021. The hospital says they are using their ongoing quarterly reports to update the community.

“We are making changes, but we still need to understand why we’re making these changes,” said Therese Hill, a nurse. “We have a whole report and investigation that could be made available.”

Danielson finds it particularly troubling that the hospital kept Jeff Sperring on as its CEO. In September 2021, dozens of physicians and scientists in leadership roles took part in a survey about Seattle Children’s, confirmed by two people who participated.

Of the 50 who responded to a question about whether they had confidence in Sperring as CEO, more than half said no. The results were given to the Seattle Children’s Board of Trustees.

“There’s the tiniest amount of community visibility and transparency,” Danielson said. “They have their own people setting their own rules, for their own approaches, to their own changes. And I would challenge the idea that there is community transparency in that.”

Hospital research this year showed parents in the community think Children’s is doing well in some areas. The research tracked the responses of 1,000 parents in the Washington, Alaska, Montana and Idaho (WAMI) region to statements about Seattle Children’s, including whether the hospital:

More than 140 parents close to the Odessa Brown Children’s Clinic responded to the same questions, indicating if the hospital:

Nurses navigate it all

Hospital staff have struggled to balance efforts to reform the hospital system with their daily duties, according to nurse Te’onna Adams, who is Black.

“A lot of what’s been implemented has fallen on kind of my direct leadership and then bedside nursing,” she said. “I know that the people I work with every day are having to do a lot right now. On top of taking care of patients.”

Nurses at the hospital created HEAL (Health Equity and Activism through Learning) committees for their units during the fallout from Danielson’s departure. Adams, a HEAL council lead, noticed committee turnover as people get spread too thin.

Tieder said she had not heard about these concerns, although she thinks clinical staff generally have a different level of responsibility related to equity, because inequitable care can cause harm. But she argued equity is “work that we should be doing day to day.”

“It should be integrated and infused in all things that we do and not really seen as an additional project or an additional set of responsibilities,” she said, adding this is the culture shift her team is trying to establish at the organization. “If we consider this work separate and apart, it does feel like a burden.”

The nurse, who asked to remain anonymous, described their experience on a HEAL council as less than ideal, amid low staffing and high patient volumes.

“It existed to me, it felt like, only in name,” the individual said. “We never got to do as much of the work as I wanted to do. So I actually left.”

Nurses at the hospital also recently secured a new union contract. During negotiations, Cortez did not feel respected.

“I remember the hospital saying, word for word, ‘It should be your honor that you are working at Seattle Children’s,’” she said. “It is their honor that I am working there … I am the best PR for this hospital to bring in more nurses, to bring in nurses of different color, different age, different background, different experience, but truly … It is the respect. It is mainly the respect I deserve.”

Earlier this year, Seattle Children’s opened the clinic’s Othello site to patients before temporarily shutting down its Central District branch for repairs, a move that frustrated Danielson.

“[They] sort of made it sound like there were new building issues that were not recognized in the past, which is really insincere,” he said. “Those are not new problems. We had floors warping and different areas with water leaking and things like that for a long time.”

The hospital often acted like it was doing the Odessa Brown community a favor by keeping the clinic open, he said, adding many people worked hard to open a second clinic so patients could more easily access services. He worried that, because that community had been made to feel like it can’t ask for too much, a new location could lead the hospital to permanently shutter the doors to the Central District site.

He also emphasized the importance of not allowing the hospital to triangulate the clinic, its members and the story of Odessa Brown to distract from the issue of racism at Seattle Children’s.

“It’s a classic tactic to try to get either the Black and brown people at the clinic to do the fighting for the executives at the hospital,” he said. “Or to try to at least pit us against each other. In order to make sure that the hospital doesn’t have to do anything.”

The hospital referenced the site’s temporary closure in its latest quarterly report.

These efforts included mailing postcards to clinic families in several languages; hosting two town halls about the closure; and sharing information in a piece by Dr. Shaquita Bell, the clinic’s senior medical director, in the South Seattle Emerald.

It’s unclear when the Central District location will reopen, but Bell told Crosscut that the Othello location, located farther south, seems to be more convenient for the majority of patients, although the clinic is also working to minimize transportation barriers for families that have a harder time getting to the site.

Bell, who described feeling enormously supported by the hospital, said it’s hard to have one person’s voice dictating what should be happening now that Danielson no longer leads the clinic. She also pushed back on his sentiments about the clinic’s ongoing structural issues, indicating she was not aware of these grievances over the years.

“I haven’t seen receipts from Dr. Danielson about how those issues were escalated over the last 25 years,” she said. “I have only been in leadership for a year and a half, and every single thing that I’ve escalated has been addressed.”

Another year of the hospital’s push to change its culture – while the public watches – has passed. Tieder knows work lies ahead.

“It’s going to be a continued journey,” Tieder said. “I hope to see this change, not just in our healthcare system, but across the country in my lifetime. And most of us are aware, this is a marathon and we still have a lot of work to do. And I’m really, really proud of the work that we’ve done thus far.”