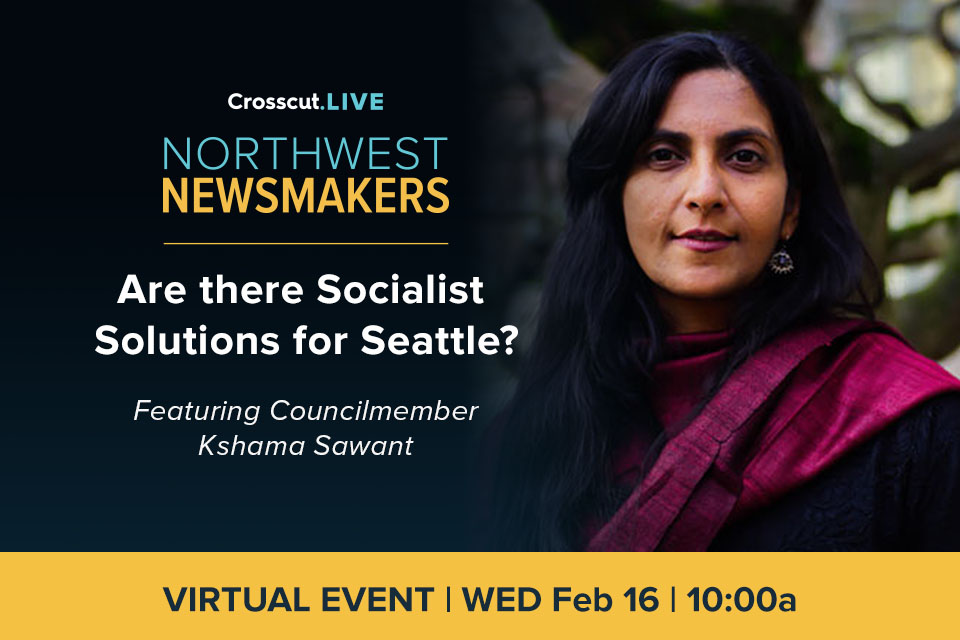 Are there Socialist Solutions for Seattle?

Councilmember Kshama Sawant joins Mark Baumgarten, Managing Editor for Crosscut, to discuss a range of topics, including how the pandemic has affected our society, the evolution of Seattle City Council during this past year, the approach she takes when new leadership enters city hall, how the recall effort turned into an opportunity to mobilize her support and the movement for working people, the message she has for individuals who voted to recall her and her thoughts on addresses the problems the city currently faces, from homelessness to public safety.

About the speakers:
Kshama Sawant
is not a career politician. She is an activist who brings a passion for social justice to her work as a public servant. As a member of the City Council, Kshama pledges to be a voice for workers, youth, the oppressed and the voiceless. She only accepts the average workers' wage and donates the rest of her six-figure salary to building social justice movements. Alongside being a teacher, Kshama is an activist, organizer, and socialist, and is a member of Socialist Alternative, in solidarity with the Committee for a Workers' International, which organizes for working-class interests on every continent. While growing up in India, Kshama was always conscious of the extreme poverty and inequality surrounding her. After working as a computer engineer, she came to the US to study economics in order to better understand the root causes of oppression and poverty. Upon arriving in the US, the richest country in the world, Kshama was surprised and radicalized by the inequality and poverty that exists here. After earning her PhD, Kshama moved to Seattle and began teaching at Seattle Central Community College, Seattle University, and the University of Washington Tacoma. She joined Socialist Alternative in 2006, and since then has helped organize demonstrations for marriage equality, participated in the movement to end the wars in Iraq and Afghanistan, and was a visible presence in the Occupy Movement. Kshama has also been an activist in her union, the American Federation of Teachers Local 1789, fighting against budget cuts and tuition hikes. In 2012, Kshama ran as a Socialist Alternative candidate for WA State Legislature and surprised everyone by winning 29% of the vote. The momentum continued in her campaign for Seattle City Council where she boldly ran on a platform of fighting for a $15/hr minimum wage, rent control and taxing the super-rich to fund mass transit and education. In November she defeated a 16-year incumbent Democrat to become the first socialist elected in a major US city in decades.