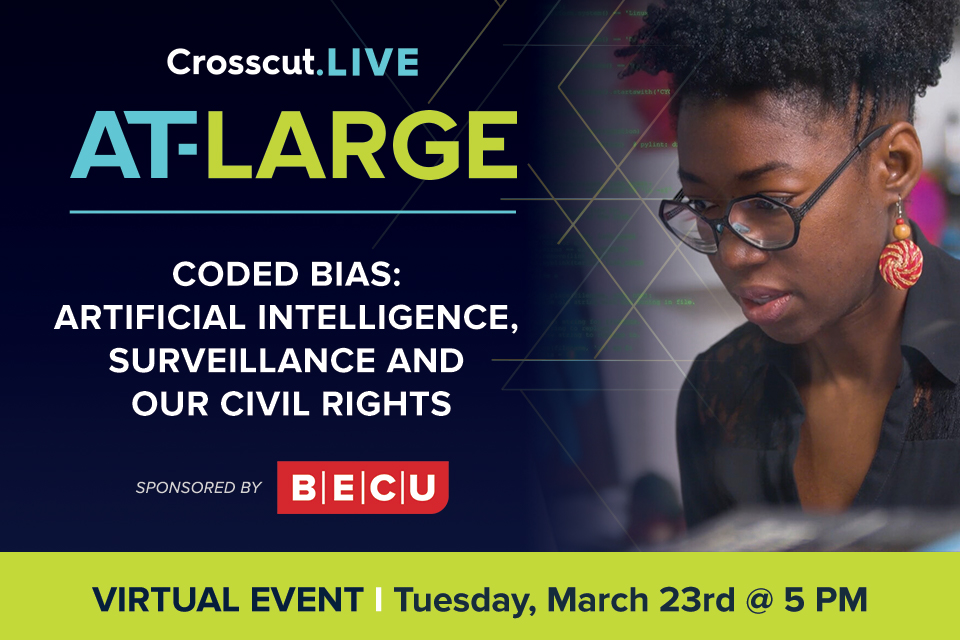 Shalini Kantayya, Director/Producer of the film Coded Bias, and data journalist Meredith Broussard join Crosscut’s Managing Editor, Mark Baumgarten, to discuss a range of topics, including how surveillance is affecting our human development, the widespread bias in AI and surveillance, the idea of building a more humane society instead of building a perfect algorithm, and how individuals can become activists around technology issues.

Inspired by the Crosscut Festival, the At-Large speaker series features in-depth conversations with renowned journalists and authors about the big issues and big ideas making headlines across the country and here at home.

When you RSVP, you can also submit a question for our speakers. We will use those questions to shape the conversation.

Mark Baumgarten is the managing editor at Crosscut where he oversees a newsroom of dedicated reporters, producers and editors telling the stories of Seattle and the Pacific Northwest. He is also the host of the Crosscut Talks podcast.

Shalini Kantayya’s Coded Bias premiered at the 2020 Sundance Film Festival. She directed for the National Geographic television series Breakthrough, executive produced by Ron Howard and broadcast globally in June 2017. Her debut, Catching the Sun, premiered at the LA Film Festival and was named a New York Times Critics’ Pick. Catching the Sun was released globally on Netflix on Earth Day 2016 with Executive Producer Leonardo DiCaprio, and was nominated for the Environmental Media Association Award for Best Documentary. Kantayya is a TED Fellow, a William J. Fulbright Scholar, and an Associate of the UC Berkeley Graduate School of Journalism.

Meredith Broussard is an associate professor at the Arthur L. Carter Journalism Institute of New York University and the author of Artificial Unintelligence: How Computers Misunderstand the World. Her research focuses on artificial intelligence in investigative reporting, with a particular interest in using data analysis for social good. A former features editor at the Philadelphia Inquirer, she has also worked as a software developer at AT&T Bell Labs and the MIT Media Lab. Her features and essays have
appeared in The Atlantic, Slate, Vox, and other outlets. Follow her on Twitter @merbroussard

Special thank you to our At-Large series sponsor BECU who have provided financial services and support to the community for over eighty-five years.

Thank you to partner Geekwire