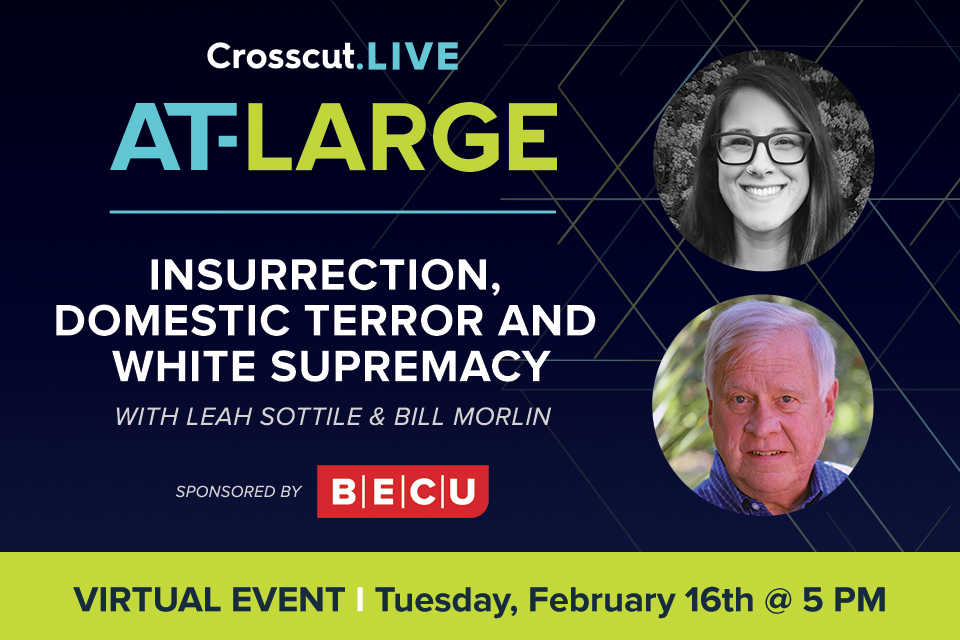 Journalists Bill Morlin and Leah Sottile join Crosscut’s Managing Editor, Mark Baumgarten, to discuss a range of topics, including the uprising by groups motivated by a white, nationalist agenda, why the Pacific Northwest is attractive to individuals with these views, the presence of military and law enforcement within these extremist groups, the Liberty State movement in Washington, and what individuals can do to prevent hatred and discourage these growing ideologies.

Inspired by the Crosscut Festival, the At-Large speaker series features in-depth conversations with renowned journalists and authors about the big issues and big ideas making headlines across the country and here at home.

When you RSVP, you can also submit a question for our speakers. We will use those questions to shape the conversation.

Mark Baumgarten is the managing editor at Crosscut where he oversees a newsroom of dedicated reporters, producers and editors telling the stories of Seattle and the Pacific Northwest. He is also the host of the Crosscut Talks podcast.

Leah Sottile is a freelance journalist whose features, profiles, investigations and essays have been featured by the Washington Post, The New York Times Magazine, Playboy, Rolling Stone, California Sunday Magazine, Outside, The Atlantic and High Country News, where she is a correspondent. She is the host of the podcast Two Minutes Past Nine, produced with BBC Radio 4, and the National Magazine Award-nominated series "Bundyville," made in collaboration with Longreads and Oregon Public Broadcasting.

Bill Morlin has covered the Aryan Nations and off-shoot extremist groups engaging in violent criminal activities and domestic terrorism for decades with the Spokesman Review and Associated Press, among many other publications. He and the Spokane newspaper have received numerous awards for extremism coverage. His work took him from the Aryan Nations compound in North Idaho to various courtrooms and extremist enclaves throughout the United States. He has interviewed dozens of racists, covered demonstrations, cross-burnings, rallies and federal and state trials of white supremacists accused of assorted violent crimes. He has written hundreds of articles about white supremacists, The Order in the 1980s, Ruby Ridge in 1992, the birth of the militia movement, the Montana Freeman in 1996, so-called sovereign citizens, Phineas Priest bombers and assorted anti-tax and anti-government groups. More recently, he wrote about the 2016 Malheur standoff in Oregon, the deadly white supremacy rally in Charlottesville and the Bundy trial in Las Vegas in 2017, and Patriot Prayer-Proud Boys rallies in Seattle and Portland the following year. And, he loves dogs and cats.

Special thank you to our At-Large series sponsor BECU.