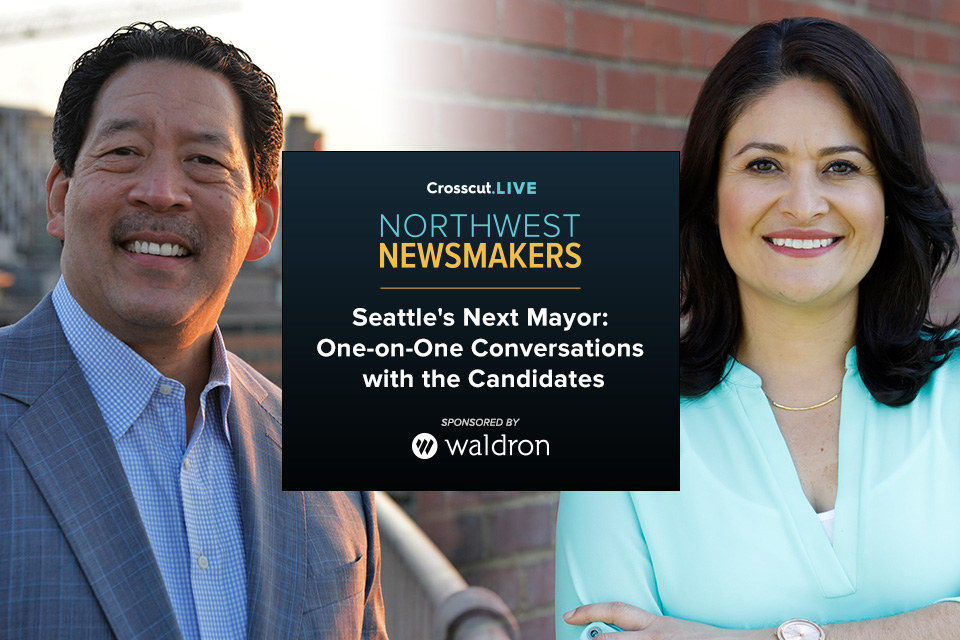 Seattle's Next Mayor: One-on-One with the Candidates

Add to Calendar 2021-10-21 18:00:00 2021-10-21 19:00:00 Seattle's Next Mayor: One-on-One with the Candidates Seattle mayoral candidates, Lorena Gonzalez and Bruce Harrell, participate in dueling 1:1 interviews as they speak on their proposed solutions to the city's enormous challenges and their vision for the future of Seattle. Special thank you to our Northwest Newsmakers series sponsor Waldron.  WATCH NOW> Virtual event Seattle, WA 98109 United States Crosscut webmasters@kcts9.org America/Los_Angeles public
6:00 PM - 7:00 PM

Two candidates are vying to lead Seattle as it faces enormous challenges - from an ongoing pandemic to a crisis of homelessness and housing to calls to reimagine policing and public safety. How they propose to take on these issues could have a profound impact on the future of the city for many years to come. Hear how each candidate sees their solutions in the context of a larger vision for the future of our city in dueling one-on-one interviews just weeks ahead of the mayoral election.

Lorena González has made a career of public service and the fight for economic and social justice. When the COVID-19 pandemic first hit Seattle, Lorena cut her maternity leave short to get back to work for the people of Seattle. She was born and raised in a migrant farm-working family in central Washington that never knew what the next day or following season might bring. Lorena earned her first paycheck at the age of eight as a migrant farmworker in the fields of Central Washington. Lorena worked her way through community college, earned a business degree at WSU, then earned her Juris Doctorate, with honors, from Seattle University School of Law, making her the first and only attorney in her immediate and extended family. She went to work as a civil rights attorney, fighting for the rights of workers, victims of wage theft and employment discrimination, and victims of police misconduct and sexual abuse.
She has served as the first Latinx ever elected to the City Council for six years. In 2020, she was elected as the Council President.

Bruce Harrell was raised in a redlined Central Area home, the son of a Black father and a Japanese mother. Bruce’s mom and her family suffered discrimination and internment during Wold War 2. Their property and small business in Capitol Hill were seized by the government, forcing them to rebuild and recover. Bruce’s father’s family came to Seattle fleeing the Jim Crow laws of the South to find meaningful economic opportunity. His father was a lifelong City Light employee and mother worked at the library. Bruce graduated valedictorian from Garfield High School. He went to University of Washington on a football scholarship to play linebacker. He also volunteered his time at the UW’s Prisoner Counseling Program, where he tutored inmates and graduated with a passion for advancing the rights and opportunities of those often left behind. Bruce went on to law school and then worked in technology and telecommunications, later representing individuals and small businesses pro bono in workplace discrimination cases.In 2007, Bruce ran for city council and was twice re-elected. He retired from the council in 2019 and returned to private practice. In 2020, he was selected to lead the city’s COVID-19 Small Business Recovery Task Force.

Monica Guzman (moderator) is the host of Crosscut's' Northwest Newsmakers series. She is the co-founder of The Evergrey, is a recent fellow at the Henry M. Jackson Foundation and Harvard's Nieman Foundation for Journalism and is a former columnist at The Seattle Times and GeekWire. She is currently an advisor to Braver Angels and the author of an upcoming guide to staying curious in divided times. She lives in Seattle with her husband, Jason, and two kids.