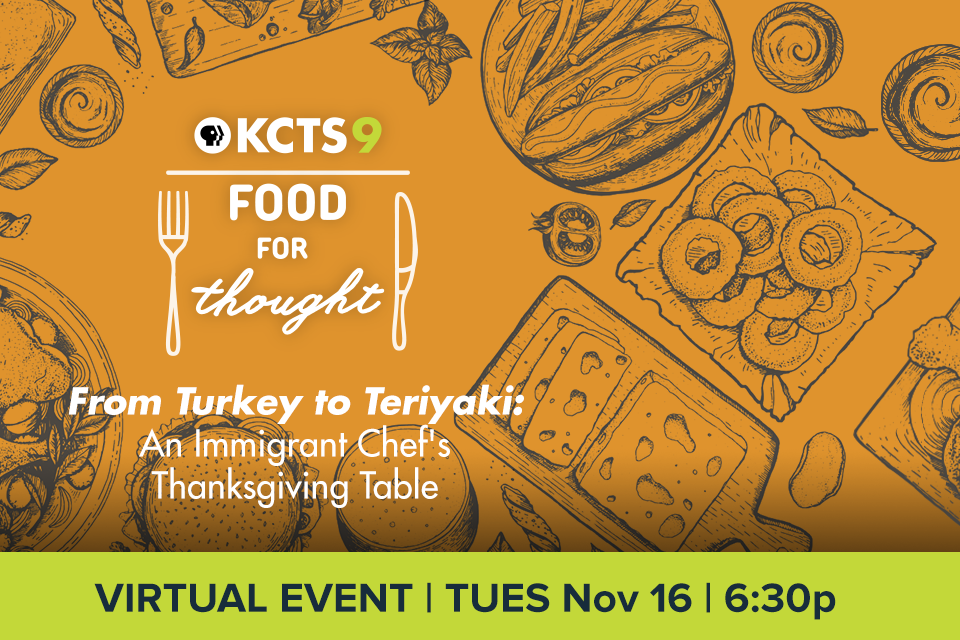 From Turkey to Teriyaki: An Immigrant Chef's Thanksgiving Table

KCTS 9 sat down with local immigrant chefs on how they’ve incorporated their traditions into the uniquely American holiday of Thanksgiving.

Rachel Belle (host) is an award-winning news radio feature reporter, radio host, podcast host & producer, and food writer in Seattle, Washington. In 2018 she won a national Edward R Murrow award for feature reporting and her podcast Your Last Meal was nominated for a James Beard Award. Your Last Meal has a five-star rating on Apple Podcasts & has been iTunes #1 food podcast several times. For over a decade Rachel’s been a feature reporter at Seattle’s CBS affiliate KIRO Radio, the Pacific Northwest’s most listened to news radio station, where she also hosts the popular “Ring My Belle” segment on several talk shows. Her food writing has been published in publications including Lucky Peach, Eater, The Stranger, Seattle Weekly and she has appeared on The Cooking Channel, Discovery Investigates, Lifetime and PBS.

Melissa Miranda Musang was founded by Filipina-American creator Melissa Miranda. Beginning as a series of pop-up brunch and dinner experiences in 2016, Musang has maintained the mission of bringing folks together in the spirit of community, with Filipinx-inspired food and experience as the mainstay. Melissa’s father immigrated to the United States in the early 70’s and moved to Beacon Hill after spending time in Alaska. His friends knew him to drive a black Mustang, on which the T in the ‘Mustang’ decal fell off after some time. Among his inner circle and eventually within his neighborhood’s tight-knit Filipino community, he became known as Musang, which is also ‘Wild Cat’ translated in Tagalog. Inspired by her father’s passion for food and her fond childhood memories of being in the kitchen with him, Ate Mel moved back to Seattle in 2015 after time spent in Italy and NYC. From there she began her pop-ups, starting with her successful Feast of the Seven Fishes dinner at Bar del Corso. Over the next three years, Musang would continue hosting pop-ups all over the city, while cultivating partnerships with non-profit organizations and collectives of Filipinx Leaders who shared a mission to share stories of food and culture. Finally, by the end of 2018, #teamMusang made the decision to find a home in Beacon Hill. A successful Kickstarter raising over $90k proved that the city was ready and supportive of their journey.

Taichi Kitamura was born and raised in Kyoto until he moved to the Seattle area at the age of 16. After graduating from Seattle University, he had worked at the best Japanese restaurants in the city including Shiro’s where he learned the craft of sushi under Shiro Kashiba.  He opened Chiso restaurant in 2001 and now owns and operates Sushi Kappo Tamura.  He is a three times James Beard Award nominee. He enjoys fly fishing and cooking for his family.

Adama Jammeh & Oumie Sallah are sisters and the founders Afella Jollof Catering, which focuses on Senegambian food—dishes from the West African countries of Senegal and Gambia, which have a shared culture and cuisine. Afella means “tastes good” in the Serer language and jollof is a local name for the people. Focusing on quality, health, and authenticity in their recipes, Adama and Oumie create everything down to the spices from scratch. After joining the Spice Bridge Food Business Incubator program last year, they have offered their mouthwatering cuisine at farmers markets, pop-ups, and catered events.

Kara Martin has worked for nearly 20 years to address racial and social inequities of community food systems through tools of planning, policy, partnership convening and community development. She is director of the Food Innovation Network (FIN), a program of the nonprofit Global to Local, based in South King County, WA. FIN’s core program includes a Food Business Incubator focused on helping women, immigrant and refugee entrepreneurs launch. Come try their delicious food and support these businesses at Spice Bridge, a global food hall in Tukwila, WA.