A look back at Crosscut's year of change and achievement. 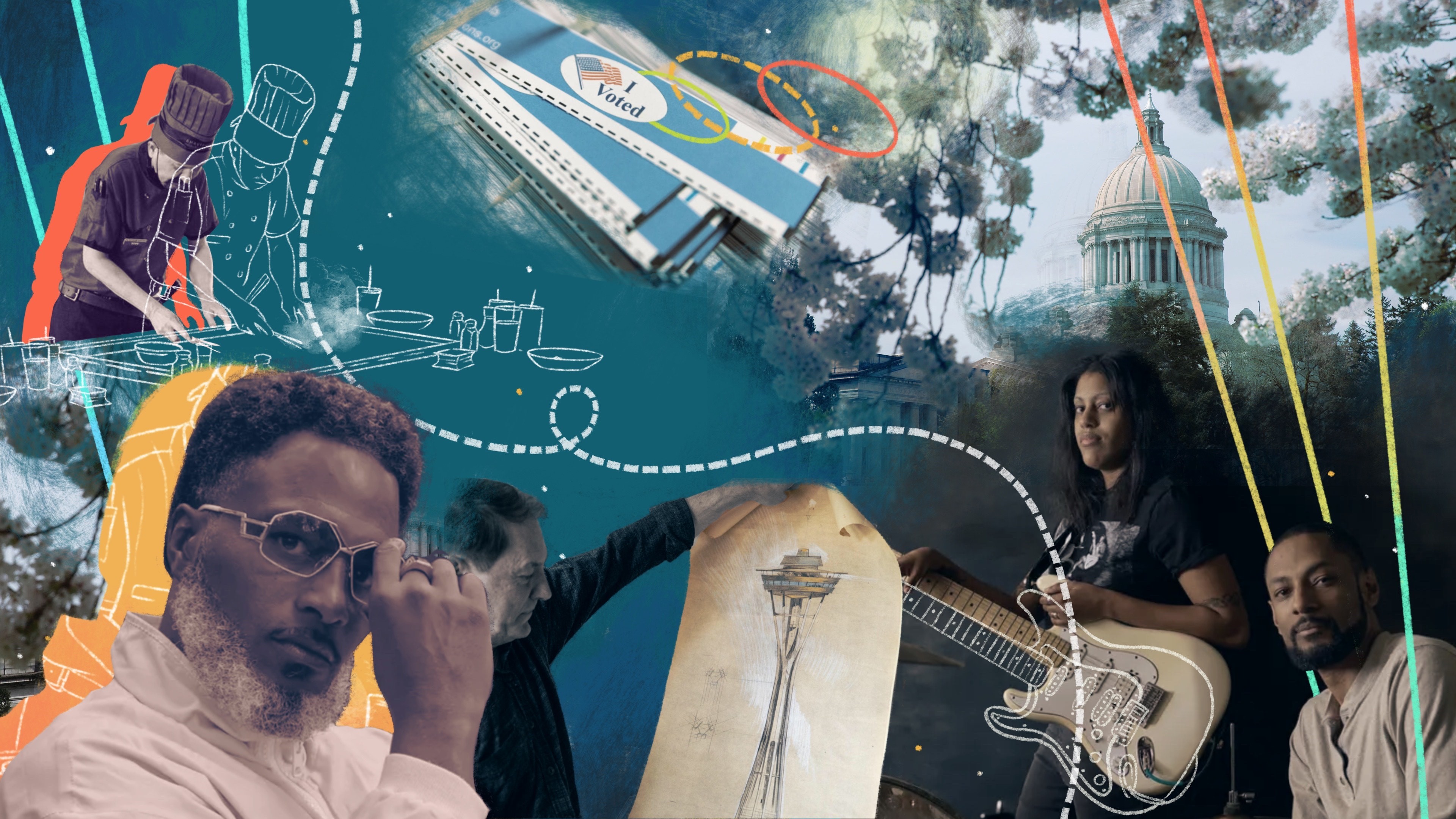 A lot has changed in the Crosscut newsroom since the beginning of 2022. We have welcomed new faces to our team, launched new projects for our audiences and continued to report on a kind of new world where the worst of the pandemic seems behind us.

Change can be chaotic, but it can also fuel creativity. Rarely is it easy.

In the past year, we’ve offered a deeper look at larger issues – such as inflation, abortion, elections and homelessness – while exploring traditionally underrepresented areas of coverage. We launched the first installment of Black Arts Legacies, a project showcasing Black artists from the past and present of Pacific Northwest arts. We also created a new investigative desk and launched Washington Recovery Watch, an investigative project tracking how local governments and organizations have managed COVID relief from the federal government.

The Crosscut newsroom also expanded its multimedia production in 2022. We added new titles like the Crosscut Reports podcast, which offers a behind-the-scenes look into the reporting process. Our video team produced original series such as “Made There,” highlighting small businesses in the Puget Sound area, and “Out & Back with Alison Mariella Désir,” which profiles change-makers who are reclaiming space, creating awareness and delivering access for the health and well-being of BIPOC communities in the region.

Along with new endeavors, we’ve expanded our election coverage with a robust Voter Guide to help you learn more about candidates; produced new, original podcast series that offer behind-the-scenes interviews with Crosscut reporters; and listened to valuable feedback from our readers to provide more meaningful coverage.

We did a lot more than we could contain in a single impact report. Instead we are sharing six of the most noteworthy projects from the year.

The inaugural effort recognized an intergenerational group of 26 local musicians, dancers, visual artists, poets, performers, curators and architects whose creative expressions document the complexity of being a Black artist in Seattle.

The seeds of this project were planted in late 2020 when the Seattle Arts Commission approached Crosscut with an idea: a project that would “present a holistic view of a Black art ecosystem that embraces and uplifts the resilient, visionary and incomparable brilliance of Black arts that exists in our region.”

Framed as a kind of digital yearbook, the concept was to illustrate Black artists as cultural bearers, cultural commentators and essential cultural contributors.

You can experience all of season one here — and stay tuned for season two, coming in spring 2023.

Crosscut launched its investigative desk in 2022 and, as its first major project, spent the year tracking federal pandemic relief and infrastructure spending by organizations and governments throughout Washington. This reporting has taken us from tiny farm towns to Puget Sound suburbs to the halls of the Capitol. We have published more than 30 stories on delays to emergency aid, barriers to program dollars, legal challenges to funding awards, government transparency gaps and more.

The investigative team covered stories from Aberdeen to Spokane, exploring how relief programs have distributed aid to community-based nonprofits, tribal programs, city and county governments, immigrants and small businesses. And we invited readers and journalists outside the Crosscut newsroom to help through our Follow the Funds guide, which contains  government budget records and data to help readers track federal spending in their own hometowns.

In recognition of Crosscut’s work to provide open records, the Washington Coalition for Open Government presented the newsroom with a Key Award in 2022, its second in as many years. You can learn more about the investigative desk in their 2022 impact report.

Our audience engagement team received over 320 questions this year from readers, helping further our coverage. Based on feedback from readers, we’ve reported on issues such as changes to Washington state laws regarding write-in candidates and measures to improve access to language interpreters in schools. We’ve also used your feedback to provide real-time updates to stories, issue corrections and better meet your needs.

One example of how your questions shape our coverage came in October, after reporter Josh Cohen published an explainer on the end of COVID emergency orders in Seattle and Washington. We asked you for more questions regarding the orders. One reader asked: “How does ending the emergency declaration affect how much food stamps you receive?”

Good question. Josh reached out to a spokesperson from DSHS and updated the story with information on a possible extension of federal benefits that could help Washington residents enrolled in food assistance programs.

Your questions and feedback continue to help shape Crosscut’s coverage. Have a story idea you want us to follow or questions regarding a previous story? Leave us a note below.

Some of our coverage in 2022 influenced public policy or forced state and local governments to change the way they communicated about an issue. A number of series this year were especially worth noting.

Former Crosscut political reporter Melissa Santos reported a series of watchdog stories on the state’s redistricting process this past spring. While on the surface, the process of redrawing political lines every decade may appear well beyond the level of political discourse most of us are comfortable with, Melissa did an exceptional job of making the process more accessible to all voters. And she made sure that the people working behind closed doors – in violation of open meeting laws – were aware that everyone in the state was paying attention.

Current political reporter Joe O’Sullivan has been deftly employing the state Public Records Act to shed some light on a collection of government reports about conditions in state prisons. These reports were researched and written on behalf of taxpayers, then dropped on a shelf somewhere and never released to the public. While Joe has been given copies of the reports, some are so heavily redacted, it’s impossible to know anything about their content. He continues to push state government officials – on behalf of Washington residents – to get the prison ombuds office to reveal more of its findings.

Joe has also brought some daylight to Washington gun regulations that were approved by voters or the state Legislature but never enacted. The most notable of his stories focused on a law calling for annual background checks of gun owners. Joe was told the law was never enforced because it would be nearly impossible to figure out how to do so. But Gov. Jay Inslee announced just recently that he had changed his mind and would be pushing to get this law enforced, in response to Joe’s reporting.

In addition to the Key Award mentioned above, Crosscut was recognized with a number of awards this year.

Arts reporter Margo Vansynghel won a Rabkin Prize for visual arts writing. This national award has never been won by a writer in Seattle. She was nominated by an anonymous panel and won thanks to her long arts-writing resume and her many wonderful articles for Crosscut, including her continued coverage on Puget Sound-region arts recovery efforts following the pandemic.

Perhaps the biggest story of 2022 was the midterm elections, and the Crosscut newsroom did its part to help Washingtonians vote. Our primary and general election guides shared nonpartisan information on candidates and ballot initiatives statewide to give voters the tools they needed to mark their ballots. This election cycle, we took a different approach than in previous years: We asked candidates for Congress and the Washington Legislature to answer a short multiple-choice survey on relevant issues. For each topic – from abortion to the economy – we provided five choices across the political spectrum and asked each candidate to mark which came closest to their beliefs, in an effort to give voters the clearest possible information.

Our readers let us know that they appreciated our watchdog election coverage – plus our everyday informative election reporting. Our deep and nuanced coverage of the 3rd Congressional District in southwest Washington – one of the most contested battlegrounds for power in the nation this year – was followed around the state and praised by our readers. And state politics reporter Joe O’Sullivan brought attention to Clyde Shaver's 10th legislative district race after his own father outed him for a less-than-honest biography.

During the whirlwind 2022 legislative session, we tracked laws about redistricting, police accountability, housing and more as bills moved through the pipes of the Capitol building. Stay tuned for our coverage of the 2023 session, which kicks off Jan. 9.

Season 6 of Mossback’s Northwest debuted this September on KCTS 9 and Crosscut. The series combines Pacific Northwest history with contemporary relevance and has become a fan favorite for online readers and public television viewers alike.

This season brought readers and viewers to the basement of Seattle’s Panama Hotel and its repository of left-behind artifacts from the Japanese incarceration during World War II; journeyed across the tundra with Arctic explorer Roald Amundsen; told the story of lawman Wyatt Earp being run out of the city; and featured Nez Perce Chief Joseph’s return to Seattle (for a University of Washington football game!).

If you’d like to get more Mossback, consider becoming a Crosscut supporter and join the Mossback Den to get special updates and members-only features from Knute Berger. If not, here’s a sneak peek at some of the rave reader reviews and responses Knute highlights in his weekly newsletter:

“I really enjoyed reading the article on the Panama Hotel. I am 68 and have lived in Seattle all my life and knew nothing of the history and abandon[ed] property of the Japanese. Continue your history lesson Knute!”

“Thank you again, Knute, for informing us on a fascinating story. Not only did you fill in much of what I did not know about Amundsen, but I was not aware of the depth of the ties to Seattle. What a great story and what a remarkable time.”

Crosscut tried something new with the Season 6 launch – a companion podcast of each episode published concurrently with the videos on Crosscut. They feature more detail about each episode and interesting conversation with podcast producer Sara Bernard. Longstanding producer Stephen Hegg retired this summer, and our new one is the wonderful Michael McClinton, who herds production and contributes with research into music, visuals and location concepts. Michael is working with editor David Quantic, and through his lens cameraman Resti Bagcal captures the shots you see.

And our Mossback special, “Embrace the Wet,” premiered on Dec. 17 on KCTS 9. You can watch the recording now on Crosscut. 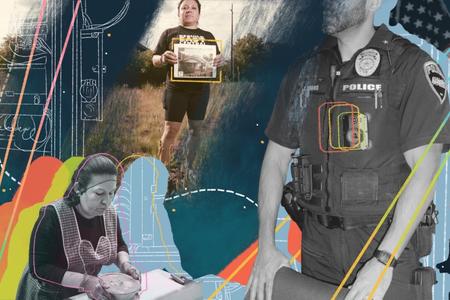 A year of Crosscut investigations into federal pandemic aid

WA Recovery Watch published over 30 stories on funding delays, disparities and unspent aid. Here's what came from that reporting — and what's next. 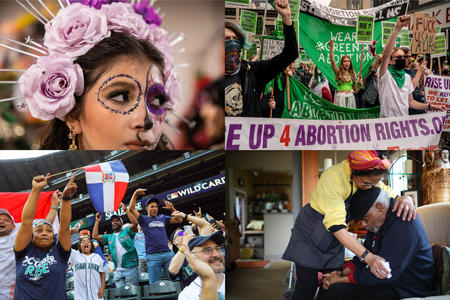 Pickleball mania, vaccinated tigers, Ukrainian art and the fall of 'Roe.' These images taken across Washington state made us think, feel and laugh. 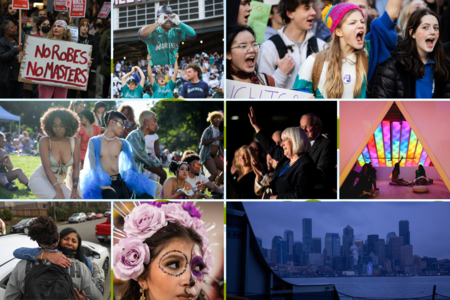 What will you remember about 2022?

Tell Crosscut what defined your year. We'll be sharing some submissions with our readers.

A year of Crosscut investigations into federal pandemic aid

WA Recovery Watch published over 30 stories on funding delays, disparities and unspent aid. Here's what came from that reporting — and what's next.

Pickleball mania, vaccinated tigers, Ukrainian art and the fall of 'Roe.' These images taken across Washington state made us think, feel and laugh.

What will you remember about 2022?

Tell Crosscut what defined your year. We'll be sharing some submissions with our readers.