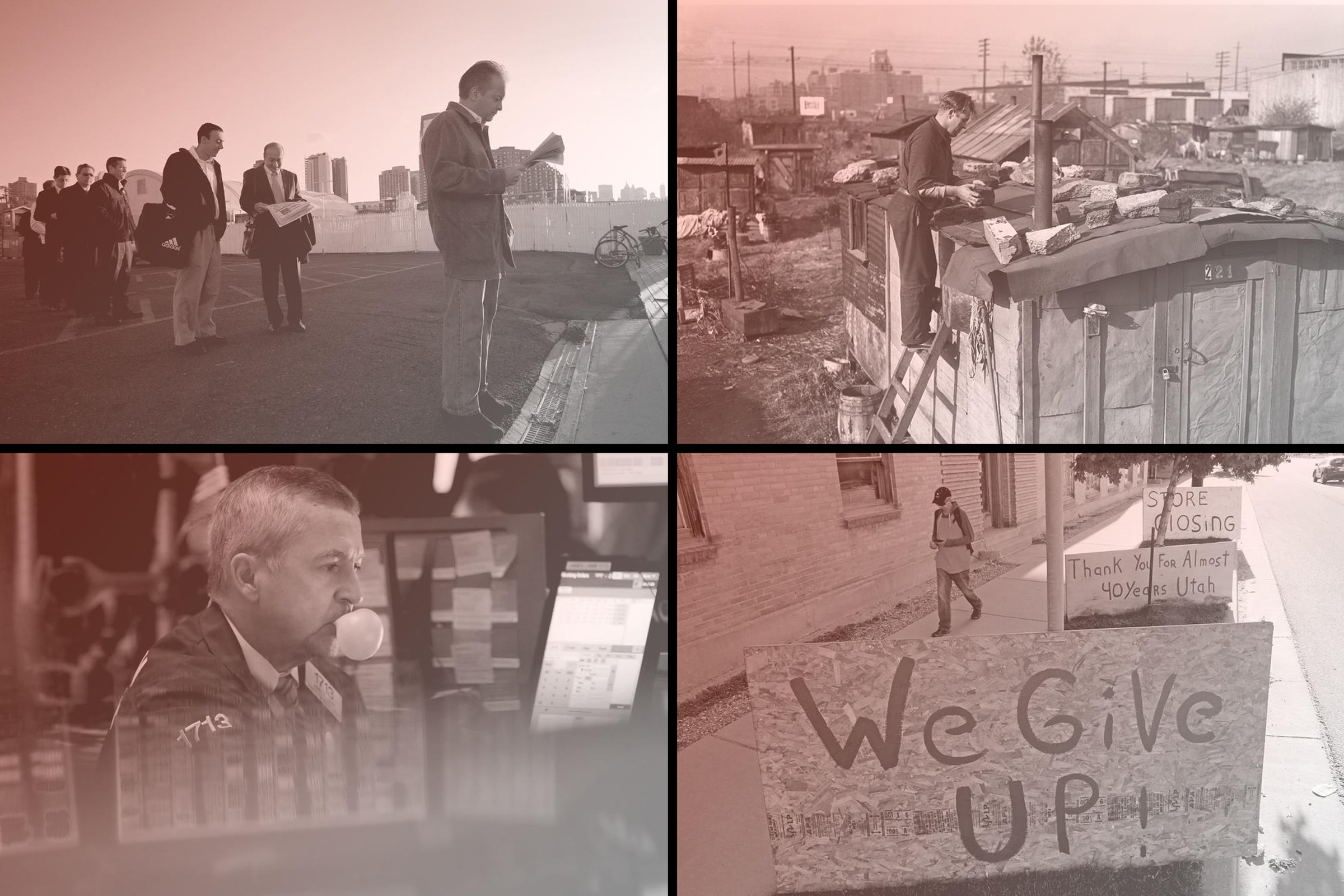 One of the questions Crosscut contributing columnist Katie Wilson unpacks: If "normal" wasn't working for so many before, can capitalism survive the pandemic? (Clockwise from top left: Mark Lennihan/AP; Seattle Post-Intelligencer/MOHAI; Rick Bowmer/AP; Richard Drew/AP)

There’s nothing like a global pandemic to cast a chill over the “propensity to truck, barter and exchange,” which the 18th century economist Adam Smith held to be characteristic of human nature. When COVID-19 hit the U.S. early this year, those who could sheltered in place with their stockpiled toilet paper, while economic activity dwindled down to the “essential.”

I’ve been a regular columnist for Crosscut for nearly a year now, and in May I turned my attention to the coronavirus recession. I dug into some of its implications, from unemployment and the climate crisis to Seattle’s city budget. But in July, things took a slightly different turn. I wrote a four-part series culminating in an existential question that most economists don’t seriously ask, at least not in public: Can capitalism survive?

Here’s why I went down that road.

Faced with an economic slump of such unusual provenance, it’s natural to wonder: When will life and commerce bounce back to normal? But my main work — coordinating campaigns for the Transit Riders Union to win progressive policies that benefit working and poor people — makes me keenly aware of another reality: “Normal” was not a particularly desirable state of affairs, either.

Gauging the economic, social and political impacts of the pandemic is a tricky business, not least because the virus descended on a world already in turmoil. Over the past decade, rising inequality and the lingering pain of the Great Recession created fertile ground for new progressive and left movements to bloom in cities like Seattle. Capitalism’s “brand” took a hit. Who would have predicted, 20 years ago, that a “Democratic Socialist” would be a front-runner for a presidential nomination? The newest wave of uprisings against police brutality, too, has assumed a visionary character, pushing the idea of “abolition” into mainstream discourse, with rhetoric that trends anti-capitalist as well as anti-racist.

People in social movements often work from a moral perspective. Feeling, for example, the ways in which our society chokes human potential, they may attribute this to capitalism and resolve to fight for something better.

But for a recession columnist and amateur economist, a different question presents itself. Quite apart from capitalism’s moral character — whether we should want to repair and reform it — can it go on indefinitely, or is it running out of road? #LateStageCapitalism: Millennial hashtag or economic insight?

That’s the question I set out, somewhat obliquely, to explore in this series. We began with the deceptively simple question: Are we in a recession or a depression? Then we took a detour back to the Great Recession, looking for clues to 21st century global capitalism’s bill of health and ask whether the coronavirus downturn could trigger a larger financial crisis. Finally, we posed the big questions about capitalism’s future.

Covering so much ground in just four columns makes for a roller-coaster ride of ideas, and inevitably leaves many questions and objections unanswered. Feel free to email me to tell me what you think and suggest topics you’d like me to explore further in future columns.

Read the entire series below:

This story was first published in Crosscut's Weekly newsletter. Want to hear more from reporters, editors and contributors like Katie Wilson? Sign up for the newsletter, below.