You asked: What does diversity look like at Crosscut?

We’re sharing the demographic numbers of our newsroom as part of our Inside Crosscut transparency initiative. 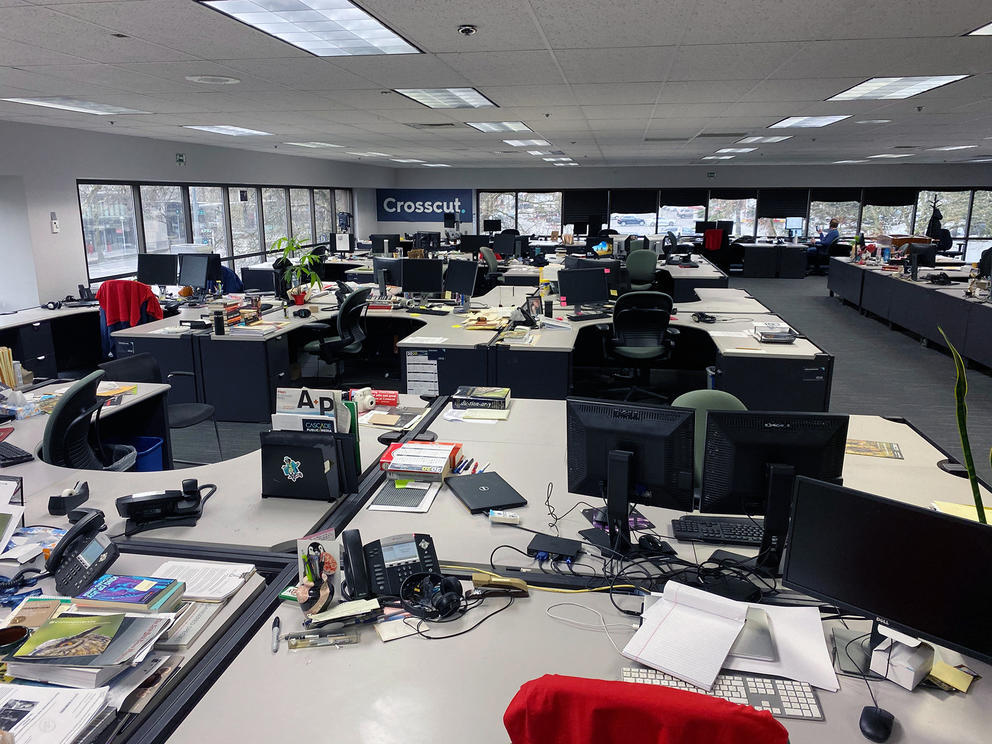 Who are the people who usually fill these desks in the Crosscut newsroom? (Matt M. McKnight/Crosscut)

As journalists, we know we have work to do to build trust with the communities we cover. When we ask someone to share their story with us, we have a responsibility to earn and protect  that trust and vulnerability. We don’t take this lightly.

One step we’re taking to deepen the integrity of our work is opening a line of communication between Crosscut and our readers to be more transparent about our journalistic standards and newsroom policies. One of the first questions we were asked was: “How many journalists of color does Crosscut employ?”

In the latest diversity statistics reported by our parent company, Cascade Public Media (CPM), in March, 40% of Crosscut’s 31-person newsroom (or “Editorial” on their survey page) identified as people of color. Twenty percent were Hispanic, Latino, or Latinx; 10% were Asian and 10% identified as mixed-race. No one surveyed identified as Black or African American; American Indian or Alaska Native; or Native Hawaiian or Pacific Islander.

The remaining 60% of our newsroom is white, about 3% less than the statistical population of King, Pierce, Snohomish and Yakima counties, according to CPM.

Representation is not only vital among staff for a strong newsroom, but also at the leadership or management level — something our industry has failed to improve for decades. As of March, white managers made up 63% of our newsroom’s leadership group, while 38% identified as people of color. (You can find a deeper look at management diversity numbers across the entirety of Cascade Public Media here.)

When it comes to gender, Crosscut is slightly ahead of the industry with women making up 60% of our newsroom, including those who make up 45% of our nine-person management team. The journalism industry has long struggled with a gender gap, too. In newsrooms across the United States, just 41.8% of newsroom workers in print, digital, radio and TV were women, according to the American Society of News Editors’ 2019 survey.

To get a fuller picture of the people who make the news at Crosscut, we asked our coworkers to take another optional, anonymous survey.

Some findings from the 27 responses (of 31 employees) we received:

Although neither CPM nor Crosscut have publicly shared the following information, some staffers used an open text box on the survey to voluntarily identify as queer or LGBTQ+, and part of the Jewish community. Publicly sharing sexual orientation or religious information is typically not done in a lot of workplaces for privacy reasons. After talking with our Human Resources department, we didn’t see any immediate way to both share this information and respect privacy.

Like many publications across the country, Crosscut still has work to do to make sure our newsroom and its leadership reflect the communities we cover. Our objective is always to tell more accurate, nuanced and vibrant stories about the region we all call home.

We hope you help keep us accountable and continue asking us questions about our team's storytelling, as well as newsroom transparency and journalistic practices. We’ll be using this Inside Crosscut column and our weekly newsletter to frequently talk about these issues, and we welcome your help in guiding those discussions.

Fill out the form below or email us — the audience engagement team: manager Anne Christnovich, digital editor Ana Sofia Knauf, and social media editor Mohammed Kloub — to let us know what you think.