Here’s what readers from around the region were thinking before and after election results. 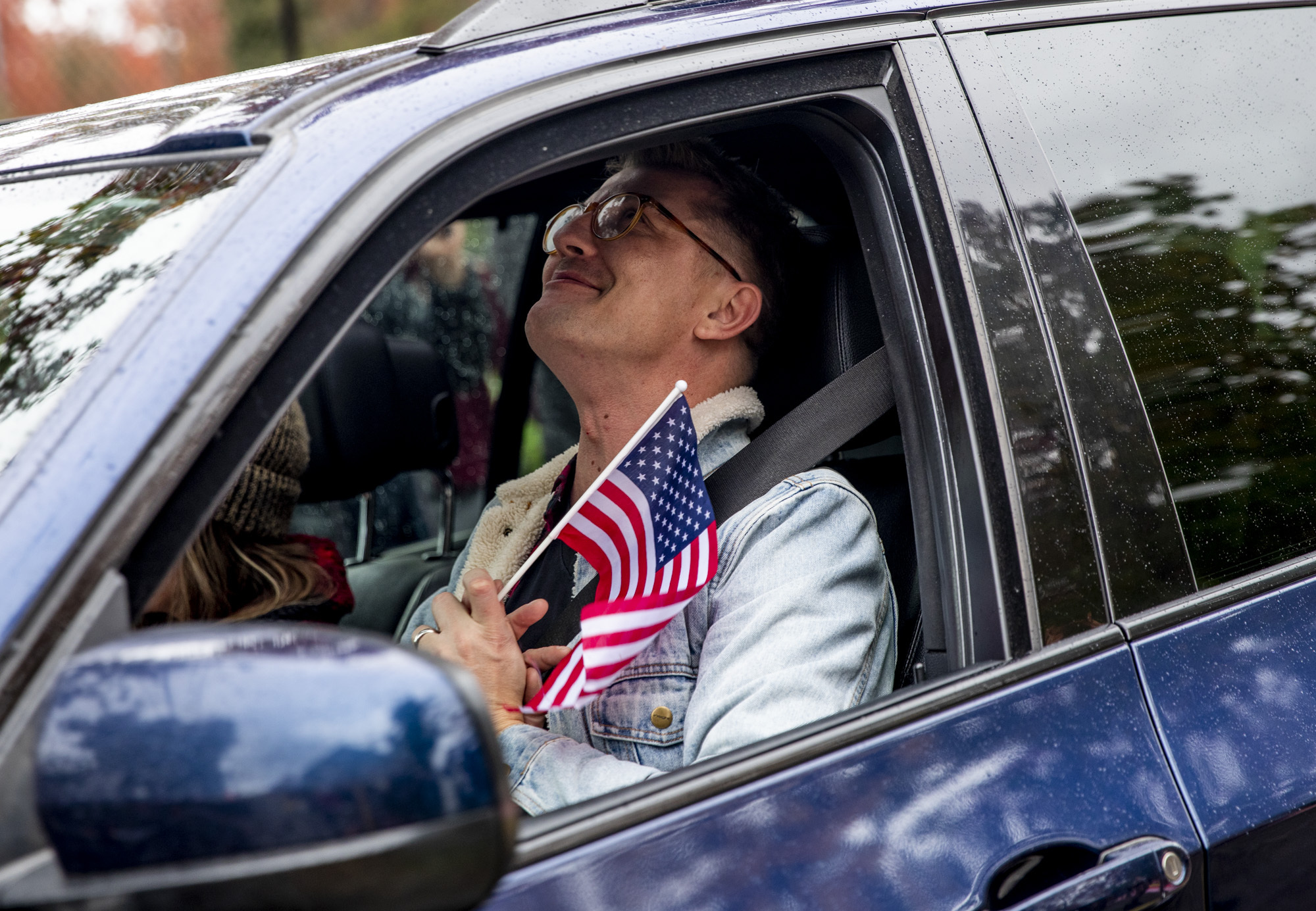 A motorist becomes emotional as they drive past people celebrating in the street near Cal Anderson Park in Capitol Hill after Joe Biden was projected to win the 2020 election on Nov. 7, 2020. (Dorothy Edwards/Crosscut)

Last Tuesday, we asked readers to help us mark the historic 2020 election by sharing how they were processing it. We wanted to know what was most important to them, whether it was a local, state or federal race, or even a specific ballot measure.

By Friday, anxiety was still high as the country waited for final results in the presidential race. On Saturday, Joe Biden was declared the next president of the United States.

We still want to know what you’re thinking about; you can share your reactions here or at the bottom of this article.

Not sure where to start? Here are a few of the responses we’ve received so far, with the most recent first. Please note these responses have not been edited, just cut for length in some cases.

I feel like I can breathe a little easier and I'm worn out. Even though Biden was declared the winner, our nation is still losing as a HUGE portion of the electorate chose a sociopathic racist. The death grip Whites have on White supremacy is heartbreaking and nauseating. White fragility, White lady tears, and White male power grabs are so 17th Century! I'm looking forward to Biden's first congressional address when he'll say the words, "Hello Madame Vice President and Madame Speaker..."
Elisebeth, 53
11/08 from Seattle

Very sad that the gap between Trump and Biden was so narrow. Wondering about the nation's moral compass with the many votes for Trump. Still having the jury out to accept that Biden/Harris have won. When the Electoral College certifies the winner of this election then I will accept the result. So much angst has occurred the past four years.
Karen, 77
11/08 from Coupeville

I am relieved that the Democratic process still seems to be working, relieved that Trump is going, still tense about what his cohorts may try to pull in his remaining time in office. I'm afraid that people still don't appreciate fully how much work it is to run a nation fairly.
Pamela, 73
11/08 from Port Angeles

I have two adult children with disabilities ... Trump has tried to take away services and benefits from folks with disabilities. I am too old to lobby now, was grateful that Biden won.
Sally, 82
11/08 from Seattle

Just 3 years ago, President Trump announced abandoning the Paris Accord, claiming he represented the people of “Pittsburgh, not Paris,” to the chagrin of Pittsburgh’s Mayor Bill Peduto and its citizens ... On Saturday, the news of president-elect Biden’s win in his home state of Pennsylvania provided a stunning rebuke of President Trump ... Nevertheless, no one should assume a decade of action is now inevitable. More than ever, it will take this unprecedented mandate of Americans to get active and drive this Congress and a Biden administration to action and help lead the world to decarbonization, limiting warming well below 2 degrees Celsius.
Vincenzo, 32
11/07 from Bremerton

I hope that people really do care. That as a nation we can start to acknowledge and address the sins of the past. Even if that makes us feel bad or requires material sacrifice. I hope that “all men are created equal” can truly mean all of us, not just some of us.
Chris, 32
11/06 from Seattle

I was happy about many of the local election results, but watching my kids — all college age, living in red states — fret over the pending national results is especially stressful. I’ve never experienced such a high-stakes election in my 44 years; my stomach is constantly in knots. Kids are texting in the middle of the night, worried about the possibility of violence at the outcome. I live by the Capitol and anticipate even more parades of obnoxious trucks down my street before, and maybe after, the results are official.
Dusti, 44
11/06 from Olympia

As terrifying as the presidential election is, there is a lot of good happening locally. Ref 90 passed insuring all kids get science-based sex ed which is lgbtq+ inclusive. king county charter amendments 5+6 look like they’ll pass setting up sheriff reform. transit tax passed. harborview passed. few dem v dem races aren’t going the way i hoped though (liias v heck, doglio v. strickland, possibly anderson v. mullet, and not technically dem v dem but lascelles v chopp). here in the 37th was happy to see kht won. Also record number of trans people won races in other states (still none in washington though). glad to see people like me aren’t ineligible for office just because of who they are.
Samantha, 31
11/06 from Seattle

I was following all of the races, with the hope that there would be a Democratic landslide for president and the Senate, along with a local candidate (Sarah Reyneveld) succeeding in my state legislative district. Without knowing who will be our next president, I still find it hard to understand how so many people could vote for someone who lies, intimidates and so ineptly leads our country. As difficult as it would be, it feels like perhaps we need to have some open, nonjudgmental communication with people who think differently than we do. Congress needs us to be role models in that regard!
Sue, 66
11/04 from Seattle

I no longer want to be part of this divided nightmare, like being raised in a household with parents who despise each other. I am grieving the loss of what I thought America was, and now have to explain to my children what it has become.
Matt, 45
11/03 from Issaquah

This election and the Trump presidency have managed to split our country like it hasn't been split since the Civil War — or, as it's called in the South, "The War of Northern Aggression.”
Peter, 77
11/03 from Bremerton

I am thinking racism and taxes seem to be the only thing Americans cared about 250 years ago, and it is the only thing they care about today. No matter what the turnout, I will keep praying for America to realize we all need to live together and we only have one planet Earth.
Mirit, 33
11/03 from Shoreline

I hope Sherae Lascelles wins. I believe they're going to push to get progressive income tax in this state. That will go a long way to getting funds for public housing and transit.
Joseph, 27
11/03 from Seattle

I eagerly voted early for Biden/Harris. I want an empathetic leader who will address racism, poverty and our standing as a nation. I’m nervous for the results, but trying to stay positive.
Zina, 57
11/03 from Bothell

I feel accepting (and grateful) of the fact that living with millions of people who do not all share underlying assumptions, beliefs, priorities and values can be challenging, especially when “my” preferred choices do not win. I am determined to live my own life with integrity and to trust others to do the same, each as we see fit, regardless of who wins.
Tamara, 60
11/03 from Seattle