What we learned from all kinds of voters this election season

The many nuanced ways Washington voters approached the 2020 election. 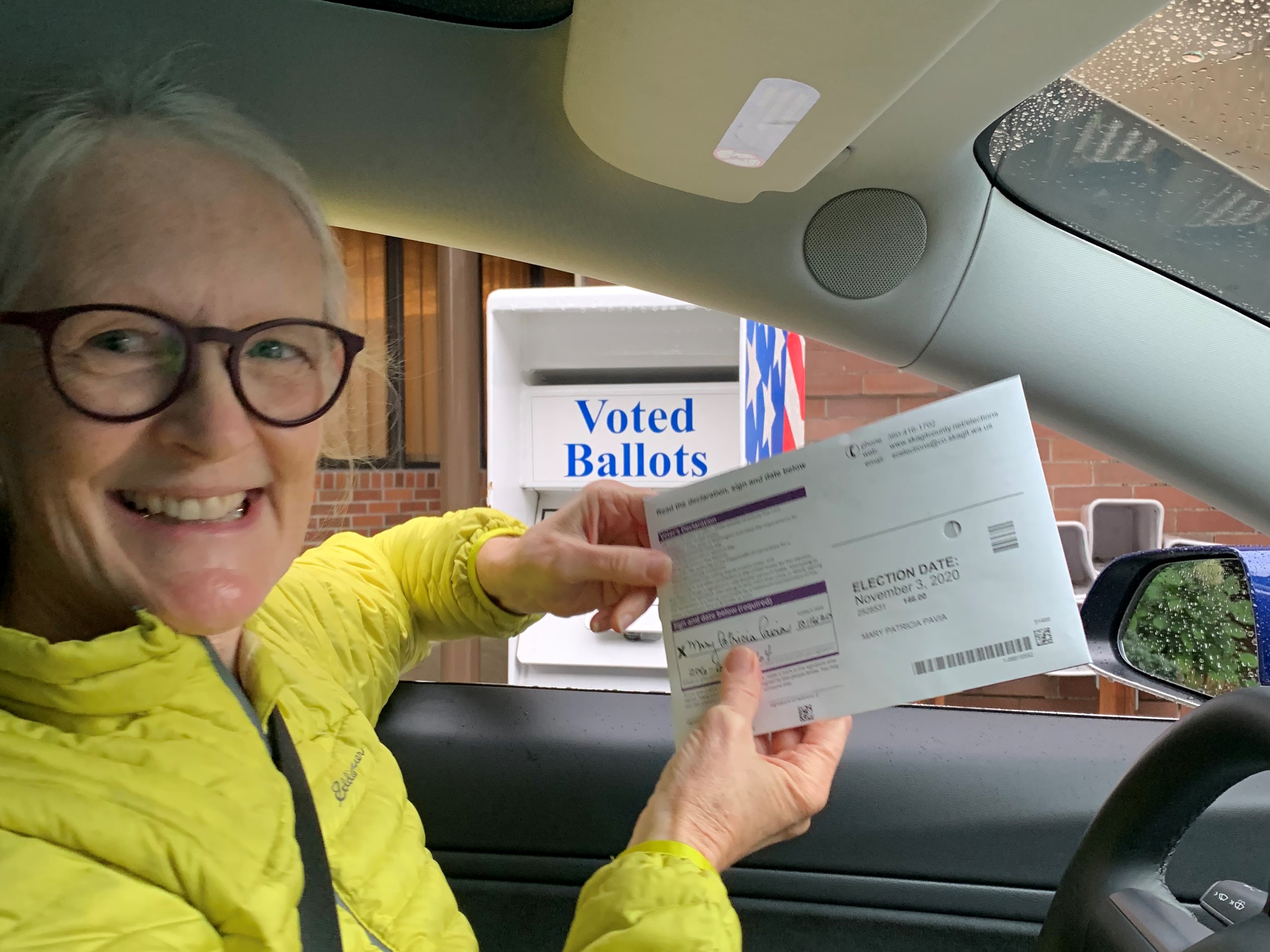 Mary Pavia of Bow, Washington, gets ready to drop off her ballot.

My mom has always been able to make new friends wherever she goes. Striking up a conversation in the checkout line at the grocery store. Knowing the tellers by name at the bank. Bringing home strangers for a holiday dinner.

I used to laugh at what I considered her Midwestern friendliness on overdrive. But I’ve learned over time that this aspect of my mom’s personality is one of the most important things I inherited from my parents that led to my career as a journalist.

I also love meeting new people, talking to strangers, collecting their stories and hearing different points of view. I embrace every opportunity to do “man on the street” interviews. This year I spent time on the phone calling up random voters who responded to a Crosscut/Elway Poll.

For our 2020 Elections Newsletter, we featured one random person each issue as the “voter of the week.” For those of us living solidly in a social and political bubble, hearing the perspectives of voters in Yakima and Spokane Valley and Bow, Washington, was a treat.

I doubt these stories changed anyone’s minds about who they planned to vote for, but they might have helped us understand why other people make different choices and how nuanced those choices can be. In Washington, you can be an Inslee-Trump voter or a Culp-Biden devotee, although based on our polling, the most likely combo is Inslee-Biden.

Subscribers to our elections newsletter have been enjoying these profiles for more than a month, but we’ll be publishing them on Crosscut.com on Tuesday so the rest of our readers can see them.

Talking to regular people has been a theme for us this election season, and that will continue on Tuesday when we send journalists out around the region to talk to voters dropping off their ballots. If you want to say hello, meet me at the Crossroads ballot drop box about 11 a.m. Tuesday. I’ll be wearing a “star-spangled” mask, holding a reporter’s notebook.

Despite all the news stories and social media posts about a slowdown at the U.S. Postal Service, Mary Pavia of Bow, Washington, didn’t start worrying about voting by mail until the August primary. When her husband’s ballot arrived a week after hers, she decided she needed a Plan B for the general election.

She originally voiced her concerns about getting her presidential ballot in time to ProPublica's Electionland project, for which Crosscut is the Washington state partner. Pavia, 58, emailed the Skagit County Elections Office to ask for help in formulating her backup plan in case her general election ballot went missing. Its advice: If your general election ballot doesn’t arrive in the mail, come to the elections office in person to get a replacement ballot.

She says their general election ballots both arrived on Oct. 16. “I was so excited, I felt like doing a dance,” she recalled during a chat on the phone this week. After filling out their ballots, they drove over to the courthouse in Mount Vernon, where the nearest ballot drop box was located.

And then they waited. And waited. Pavia kept hitting refresh on vote.wa.gov to check that her ballot had been received. After a week of waiting, her election anxiety returned. So Pavia sent another email to the county elections office and got an immediate response: We’re overwhelmed with early ballots and are a little behind on processing; be patient and give us a few more days.

Her ballot showed in the system the next day, and she was able to take a deep breath.

Pavia says she’s a regular voter and has voted by mail for years without anxiety. “Really my angst this year was because of our primary experience,” she said, but quickly added all the other things happening right now that have added to her stress. She’s dealing with her worry by becoming more engaged politically, sending texts to voters in other states, for example, and donating to races in other states to help elect Democrats to the U.S. Senate.

Before the election in 2016, Pavia was pretty confident Hillary Clinton was going to win. This year, the national vibe is more fearful than celebratory. “The psyche is fragile,” she said. “There’s a lot of fatigue at all levels. There’s COVID fatigue, there’s election fatigue, there’s Donald Trump fatigue,” she said.

“We’re on that last stretch of the marathon,” she added, perhaps as more of a pep talk to herself than a statement of fact.

Gerald Hughes, a lifelong Bellevue Democrat, told our pollsters a month ago that he wasn’t sure who he would choose for president. However, recent events in the election contest have led him to not only vote for former Vice President Joe Biden, but to actively campaign on his behalf.

Hughes, who is 77, said his main concern about Biden was his age.

“I couldn’t do that job at 77. When I see two old white men running for the most important position in the world, it concerns me,” Hughes said.

But then President Donald Trump got COVID-19, and he started making comments that really concerned Hughes. So he decided he better take a closer look at Biden and his platform. Hughes found he was about 90% in agreement with Biden’s platform, and now he’s delivering signs and posting on social media in support of his campaign.

Hughes has 10 grandchildren and two close nephews who are among those hearing why he thinks they should vote for Biden.

“I tell them that we’re looking at the future of our country. We have made a lot of moves toward fascism in the last few years,” Hughes said, comparing Trump’s rally speeches to speeches given during World World II by another leader. “It feels like someone wants to be a dictator. … That narcissism is frightening.”

He also has strong opinions on the Republican candidate for governor, Republic Police Chief Loren Culp. In our conversation, Hughes mostly focused on Culp’s lack of leadership experience.

“It’s like a guy runs a local computer shop and he decides, because of that experience, to be CEO of Microsoft,” Hughes said. 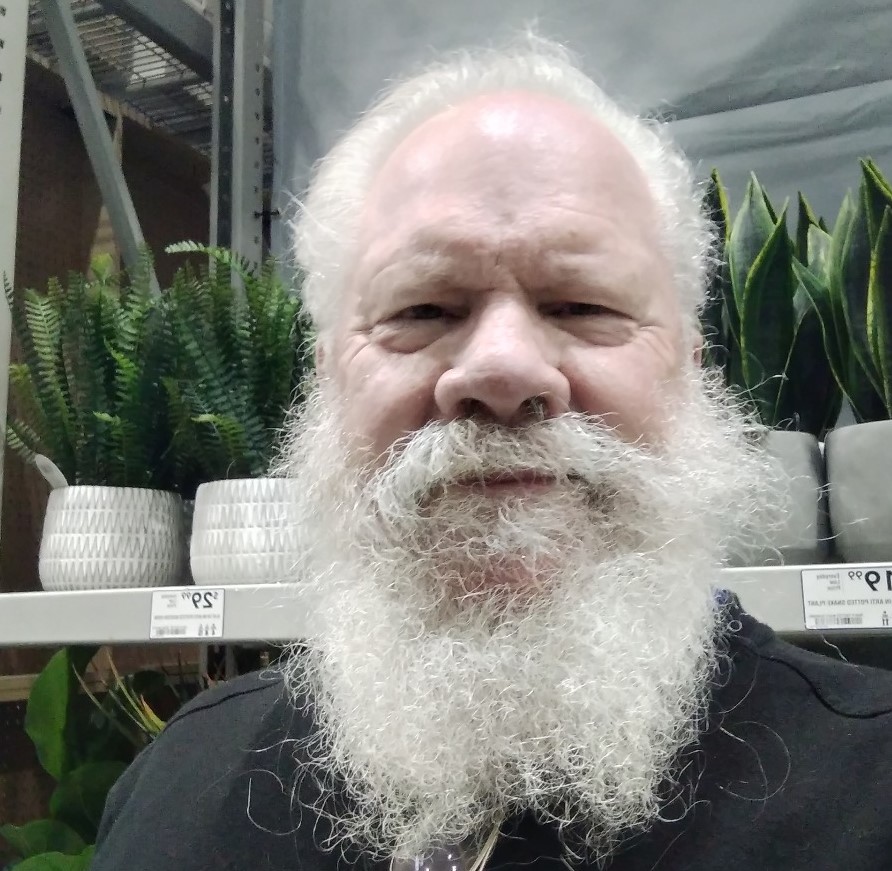 Ralph Hammersborg, a Seattle retiree, describes himself as an independent voter.

Ralph Hammersborg, a Seattle retiree, describes himself as an independent voter.

A vote for dad

Ralph Hammersborg is an Independent voter who leans philosophically toward the Libertarian Party. The Ballard retiree plans to vote to reelect Gov. Jay Inslee, who he says has done a “good enough job” and will easily win the race. For president, Hammersborg says “I won’t vote for Trump and I don’t want to vote for Biden.” His likely choice will be Jo Jorgensen, the Libertarian candidate.

But Hammersborg, 71, who also voted Libertarian in 2016, acknowledges that he has the freedom to make that choice because he lives in Seattle, where he says his votes for both governor and president don’t really make a difference. Washington state voters have chosen a Democrat in each of the past eight presidential elections. So one vote for Jorgensen is a drop of water in a fast-moving stream. And Inslee is so far ahead in the polls, Hammersborg doesn’t think his opponent, Republic Police Chief Loren Culp, has a chance.

Hammersborg says he might have made a different choice for president if he lived in a “teeter-totter state,” which is what he calls battleground states, where the outcome is less sure and the results could determine who is living in the White House at the end of January.

He is not as conservative as one might expect from a man planning to vote Libertarian for president. “I worry about my grandkids. I have five grandkids. I worry about what the world will look like for them,” said the “retiree” who is working four jobs right now, as a substitute teacher, a boat captain, a yacht broker and (best of all) a mall santa in December.

He has three sons, whom he expects will all vote for Biden, although he’s not absolutely certain about the son who wrote in “Ralph Hammersborg” for president four years ago.

Kelly Sorenson is an independent voter from Yakima who leans conservative but says he’s decided to vote to reelect Gov. Jay Inslee because of the way he handled the pandemic.

Sorenson, 49, who hasn’t worked since he was disabled in a lumber mill accident in 2006, says he lost a family member from COVID-19. He was worried about the infection rates in the Yakima area until the governor mandated mask use in public. Now that people are following the rules, infection rates are down.

He said he won’t be voting for Trump, but he’s not likely to vote for former Vice President Joe Biden either, because of Biden’s work on crime bills while in Congress and as vice president. He called Biden “kind of wishy-washy,” and said he might not vote for president or could “throw away his vote” on a third-party candidate.

Sorenson says he is a gun owner and previously voted for whichever candidate more strongly supported gun rights. He has reevaluated that posiition since a friend was severely injured while serving in the military in Iraq. Sorenson now believes liberals are less interested in war and can do a better job of running the country.

Jo Nordblad is an independent voter from Valley, north of Spokane. She told our pollster in July that she thought Gov. Jay Inslee did a good job handling the coronavirus pandemic, but she hadn’t made up her mind whom to vote for in November.

Nordblad, 64, has now made up her mind to vote for Loren Culp, Inslee’s Republican opponent. Culp has based much of his campaign on his disagreement with Inslee’s handling of the pandemic and Nordblad said that does give her pause. A family member died from the coronavirus this summer, but since the virus has almost disappeared in Stevens County, she is less concerned about the governor’s race than she would have been.

She made her decision based on other things she feels Inslee and his fellow Democrats have done in Olympia. “I don’t like how Democrats freely spend money we really don’t have,” said Nordblad, a retired business owner who became more conservative a decade ago when she felt small businesses were being treated poorly.

Nordblad said she plans to vote to reelect President Donald Trump and says her reason is the same as it was four years ago: “I don’t really like him but I think he’s good for our country.”

She added, however, that she does not like the way the president has handled the pandemic, and disagrees with him about mail-in voting.

Her closing thought about the November election: “I hope it doesn’t get ugly.”