Top stories of 2020 in Washington state

In the longest, shortest year in most of our lives, a lot happened. Recap the year with us and look ahead to 2021. 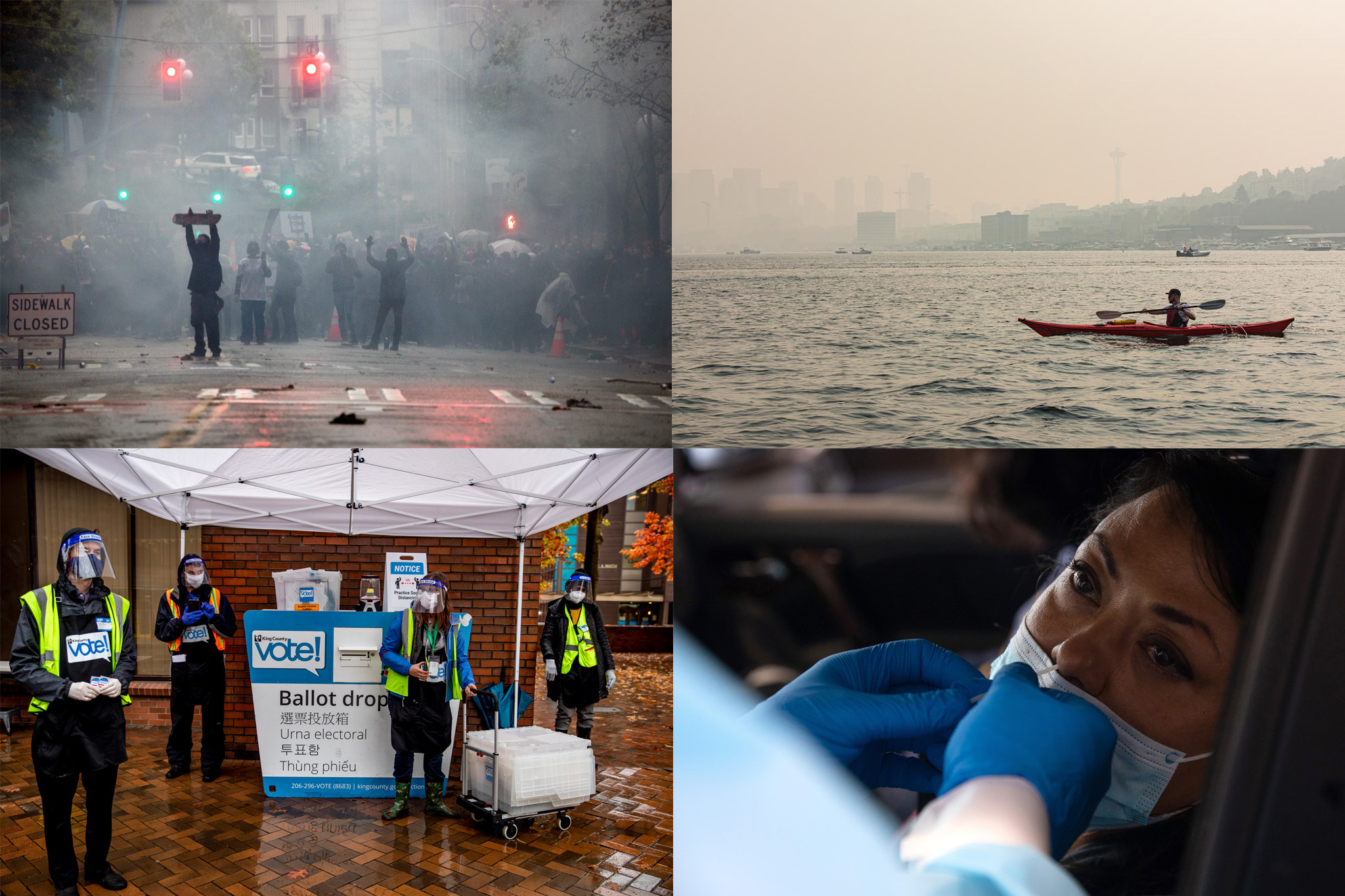 The word of the year has to be “unprecedented.” It’s maddening, overused and, unfortunately, true. Time feels simultaneously frozen and moving at least a million miles an hour. As a result, it can be difficult to remember what the heck happened these past 12 months between our bouts of reading everything to desperately avoiding all those breaking news alerts.

This roundup is an effort to take stock of the year through the stories we helped tell about politics, science, and culture across our region. How were these chosen? They’re partly based on what you read the most, but we’re also sharing some of the topics and stories that stuck with us this year.

It’s strange to think back to February, the month many of us thought Puget Sound communities were safe from the coronavirus. By March, Seattle became a living laboratory for the United States’ early coronavirus response, as local scientists raced toward a vaccine. Soon, Washingtonians started hearing about coronavirus cases closer to home. Reporter David Kroman shared the stories of Bainbridge Island residents Marnie and Tom Malpass, who both tested positive, but experienced drastically different symptoms. The stories resonated with thousands of readers like you in the early days of the pandemic, when information felt scarce.

Here’s a small slice of the coronavirus stories we reported this year:

Year of the voter

Lest we somehow forget, 2020 was also an election year — an especially heated one with a global pandemic at its center. One of the hot topics: the security of voting by mail, a system Washington state has used since 2011. Fifty-eight percent of our state’s voters cast their ballots for Democratic presidential candidate Joe Biden. Although the Electoral College confirmed Biden’s win last week, some Washingtonians are still fighting for Donald Trump. Here at home, Gov. Jay Inslee won a third term, but Democrats ultimately failed to win more seats in the state Legislature. One group that prevailed: Black women, who made historic gains in Washington politics.

Looking back on our history

As many of us tried to stay afloat in the deluge of coronavirus news this year, Knute Berger, Crosscut’s editor-at-large and host of Mossback’s Northwest on KCTS 9, looked to Washington’s past to better understand today’s pandemic. Berger took us back to the 1918 flu pandemic and revealed that — wait for it — history repeats itself. Back then, there was a surge of health cynics and anti-vaxxers, as well as deadly premature optimism. But our resident historian took time to dig into other parts of our region’s history, including a dive into the role of oysters, a secret presidential visit to the World’s Fair and Washington’s Confederate legacy.

P.S. Crosscut supporters get to hear from Mossback in an exclusive weekly newsletter. Find out more here.

The deaths of hundreds of Black Americans at the hands of police, including Breonna Taylor and George Floyd, reverberated across the country this summer, sparking mass demonstrations and uprisings. Washington was no exception. Seattle was the epicenter of the state’s Black Lives Matter protests, which saw tens of thousands of people march in protest and the creation of a controversial activist zone in Capitol Hill known as CHOP or CHAZ. Outside this year’s BLM protests, Black Washingtonians have made efforts to identify and address white supremacy by calling out natural hair discrimination and racism within state Democratic groups.

While the discussion around policing is closely tied to BLM, it’s distinct in how it spun into its own storyline this year. Seattle began to question how it handles public safety, from a daylight shooting in downtown before the pandemic, to discussions of what it means to defund the police, to Police Chief Carmen Best’s resignation in September. This year’s intersection of policing and politics will likely continue to play out in 2021, as Seattle hosts city council elections and a mayoral race — now wide open after Mayor Jenny Durkan announced she won’t seek reelection.

As though a pandemic wasn’t enough for all of us this year, the West Coast also faced a devastating wildfire season in early fall. In Washington, we choked on smoke plumes from regional fires, alongside those that traveled from California and Oregon. Malden, a town in Eastern Washington, almost completely burned to the ground. The small town of White Salmon even had the worst air quality in the world at one point. One point many Washingtonians could agree on: These fires are becoming all too common.

For more on the uptick in wildfires fueled by climate change and how improving forest health could make a difference, check out the series Smoky Skies, Altered Lives from our partners at InvestigateWest.

The pandemic’s devastating effects upended not only the restaurant and hospitality industries, but Seattle’s music, theater and art venues as well. While some artists have found resilience and hope amid the chaos, there are still plenty of questions remaining: Will beloved local music venues and restaurants survive? How will dancers and performers figure out a virtual life well into 2021?

Crosscut has a newsroom of journalists, but we also make space for people across our region to write from distinct perspectives about the issues impacting their communities. The goal: to raise thoughtful discussion (we hope). After Supreme Court Justice Ruth Bader Ginsburg’s death in September, her former law clerk, Liz Porter, shared memories of working with the women’s rights icon. Seattle writer Mary Park chronicled going through brain surgery right as coronavirus descended upon the city. Journalist Marcus Harrison Green reflected on the Othello Park march and the hope it inspired in him in the wake of another string of killings of Black Americans. After the November general election, Crosscut’s Knute Berger made it clear that Washington has more than one political bubble — and it’s one we don’t often acknowledge. Columnist Katie Wilson examined the history and future of antitrust during the boom of Big Tech.

One that’s worth revisiting this Christmas week: Central Washington reporter Emily McCarty’s story of losing her mom to COVID-19 ahead of the holidays.

Keep an eye out for more of Crosscut's year-end round ups this week.