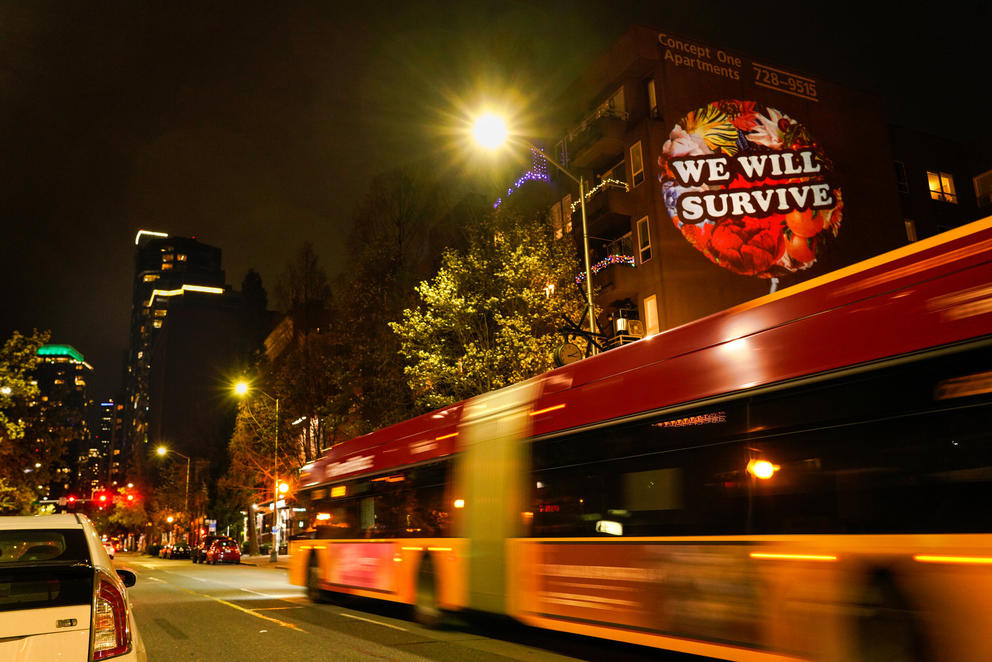 For their project 'Rise Above,' Seattle art duo Electric Coffin projects messages of hope on the sides of local buildings. (Roq La Rue)

Gabriel paints intimate, nuanced portraits of these women, who determinedly pursued a creative life in a male-dominated field during a time of unparalleled social and economic turbulence. They survived the Great Depression, thanks in no small part to the Works Progress Administration’s Federal Art Project, and the traumas of World War II. These were starving artists — sometimes literally — frequently dismissed because of their gender, and yet they were driven to keep making work.

Though I’m not yet halfway through the book, my copy is already dog-eared and underlined, as I am finding so much resonance with artists making work today, under their own unprecedented circumstances. These are the Northwest artists that Crosscut reporters Margo Vansynghel, Agueda Pacheco Flores and I have written about over the past year, as the coronavirus took a bulldozer to the regional arts landscape.

I have been writing about Pacific Northwest arts and culture for nearly 20 years, and this past one was the most challenging and unpredictable. When I first launched Crosscut’s weekly Arts & Culture newsletter, just over two years ago, it was a way for me to share local arts news, as well as a few of the most captivating happenings in visual art, dance, film, theater, music and literature. It often read like a weekend list of “Things to Do,” because there were so very many things to go out and experience in arts-rich Seattle.

Since the COVID-19 venue closures, there have been significantly fewer things to do — at least in group settings. But the artists and makers have kept moving forward, often employing their creativity by way of innovation.

The arts and culture landscape has changed so much that it seemed not just necessary, but important, for the newsletter to shift too — from listicle to chronicle of this historic period, tracking the responses by local artists and cultural workers week by week. I’ve been zooming out to place local artists in a wider context, from the insurrection at the U.S. Capitol to poet Amanda Gorman’s reading at the inauguration. And zooming in on remarkable Northwest stories, such as Café Racer’s move from live music venue to an online radio station focused entirely on Washington state musicians.

I recently renamed the Arts & Culture newsletter (formerly known as Editor’s Notebook) ArtSea: Notes on Northwest Culture. I think it reflects a sense of place and purpose, as well as the propulsive force that keeps creativity flowing in this mossy corner of the country.

In the introduction to Ninth Street Women, Gabriel writes: “The work of the artists in postwar New York, like the work of artists during turbulent periods throughout history, acted as a kind of beacon, a ping from hidden depths reminding those who searched for it that, all evidence to the contrary, civilization had not perished.”

Similarly, I hope that ArtSea can be a kind of local radar, picking up on those cultural pings and plotting them on a map for you to explore — even if only, for the moment, from home.

This story was first published in Crosscut's Weekly newsletter. Want to get ArtSea in your inbox every Thursday? Subscribe, below.