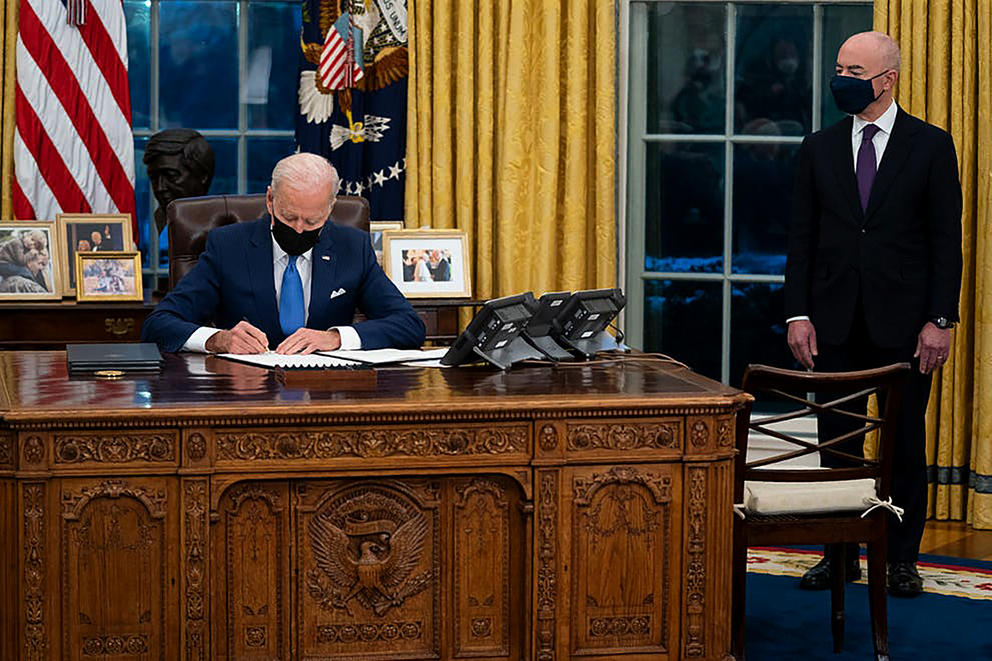 Secretary of Homeland Security Alejandro Mayorkas looks on as President Joe Biden signs an executive order on immigration, in the Oval Office of the White House, Feb. 2, 2021, in Washington D.C. (Evan Vucci/AP)

Many of the immigration headlines in the last few weeks have screamed big changes: “Biden reverses Trump’s ‘Muslim ban.’ Americans support the decision,” read one from the Washington Post. “Biden Suspends Deportations, Stops ‘Remain In Mexico’ Policy,” read another one from NPR.

While accurate, the headlines do not always acknowledge both the hope and frustration immigration advocates feel with the new administration. To be sure, President Joe Biden has signed a flurry of executive orders that do have an immediate impact on certain aspects of immigration law. But immigrants say they experienced such draconian policies the past four years that they have a hard time getting excited about simply returning to what might amount to a pre-Trump status quo.

On Tuesday, for example, Biden signed a trio of immigration orders: One established a task force to reunify migrant families separated at the border under the Trump administration’s "zero tolerance" policy. Another order included an immediate review of the so-called public charge rule, a policy that sought to deny green cards to immigrants who use, or are likely to use, public benefits, such as food stamps and Medicaid. A third required the government to address the root causes of migration and examine the "Remain in Mexico" policy, which has required asylum seekers to wait south of the border as their immigration cases proceed.

But for many advocates it wasn’t enough. How will we know the task force to reunite migrant families will be effective? And how long will the reunification process take? Families have already been waiting long enough, advocates tweeted.

One organization in Texas, the Refugee and Immigrant Center for Education and Legal Services, or RAICES, which provides legal services to low-income immigrants, called for a Truth, Reunification and Reconciliation Commission “to get the justice directly impacted families deserve.”

“The limited scope of the task force means that there will be no justice for those families who were separated and then wrongfully deported, as they currently are not eligible for return,” the organization said in a statement.

Others pointed out the review of certain policies, such as the public charge rule, was unnecessary, or that quicker action was needed for those impacted by the Remain in Mexico policy but who are still stuck at the border.

In a sense, the past four years have emboldened activists. They’ve made clear they will not be satisfied with simply eradicating former President Donald Trump’s policies but want more progress.

This story was first published in Crosscut's Weekly newsletter. Want to hear more from reporters like Lilly Fowler? Sign up for the newsletter, below.