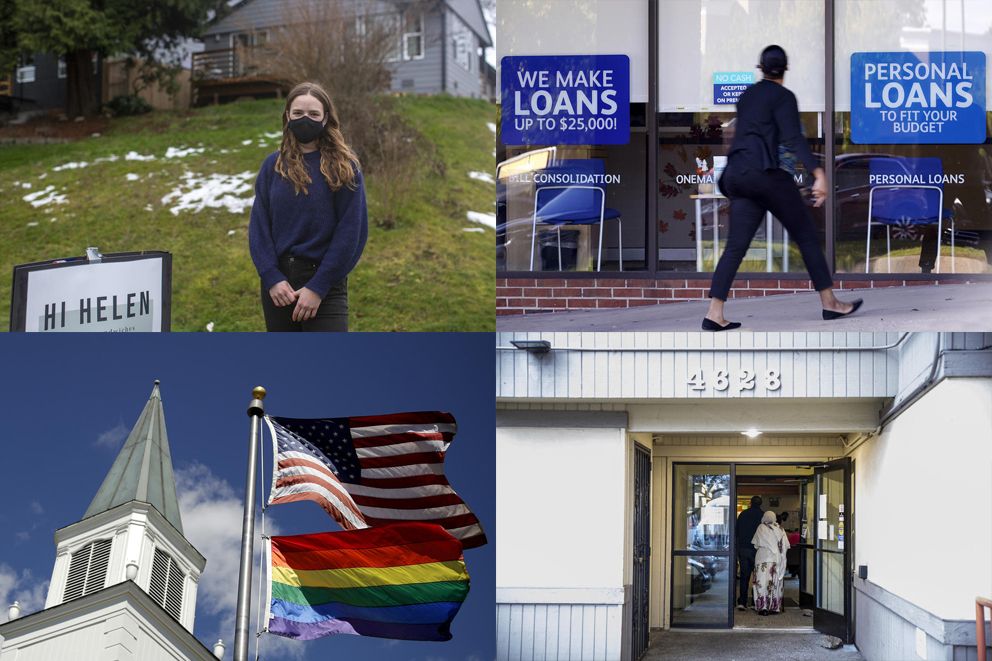 From food app inequities to predatory lending and vaccine rollout, Samantha Allen has looked into some of the most pressing issues and those that fly under the radar. (Clockwise from top left: Shaminder Dulai/Crosscut; AP; Dorothy Edwards/Crosscut; AP)

When I moved to Seattle in 2018, I heard a lot about what the city wasn’t. It’s “not affordable,” I was told. It’s “not friendly.” It’s “not the same anymore.” All are true, I think — though the Seattle Freeze remains a topic of debate. But I always wanted to know more about what Seattle is and, perhaps more important, what it can be. I wanted to acquaint myself more deeply with this beautiful, strange, expensive, diverse, frustrating and imperfect place. That’s what I’ve tried to do while writing for Crosscut and what I’m going to continue doing as a columnist for the site.

My background is in national journalism, first covering LGBTQ issues at The Daily Beast, then writing as a freelancer for outlets like the New York Times, CNN and others. My country-spanning travelogue Real Queer America came out in 2019. But living in Seattle has shifted my attention toward the more immediate issues that affect us. Increasingly, I’m converted to the idea that we can’t live in a better country until we live in better towns, cities and counties — which is why I’m proud to be contributing to Crosscut.

Right now, I’m working on a piece about how complicated it can be to get rid of Styrofoam blocks within Seattle city limits, talking to several government officials and recycling companies to figure out why thousands of tons of expanded polystyrene still end up in our landfill every year. Like many of my columns for Crosscut, it begins with an observation: I’ve watched people fill up apartment building dumpsters with those blocks, especially after holidays. From there, I form a question: In a city that has banned Styrofoam food containers — and in a state considering doing the same — what can be done about their bigger, blockier cousins? And then I don’t stop digging until I get all the answers I need.

That’s the same approach I have taken to topics like the fate of Seattle’s iconic neon signs (R.I.P., Denny Way Elephant) or the impact of delivery apps on local restaurants — and it’s an approach borne out of affection for this place. I love our ferry system, our WNBA team, our global cuisine and our gloomy weather. I am on a self-professed quest to honor Seattle’s character without becoming too exclusionary toward people who move here, which is why you’ll find me getting records at Golden Oldies, but also why you’ll never hear me offhandedly dismiss the transplants. But as much as I love this area, I’m also troubled by its deep inequality, and by the fact that virtually all of my income goes toward food, housing and health care. I believe that you need to critique the things you love so they can get better.

That’s what I aspire to accomplish in this space: I want my column to shed some light on what Seattle is right now, helping us feel more connected to it in the moment as we imagine better futures.

This story was first published in Crosscut's Weekly newsletter. Want to hear more from writers like Samantha Allen? Sign up for the newsletter, below.