One year in, there’s an emotional toll from reporting on COVID-19

A reporter reflects on the relationships she’s built with sources amid chaos and uncertainty. 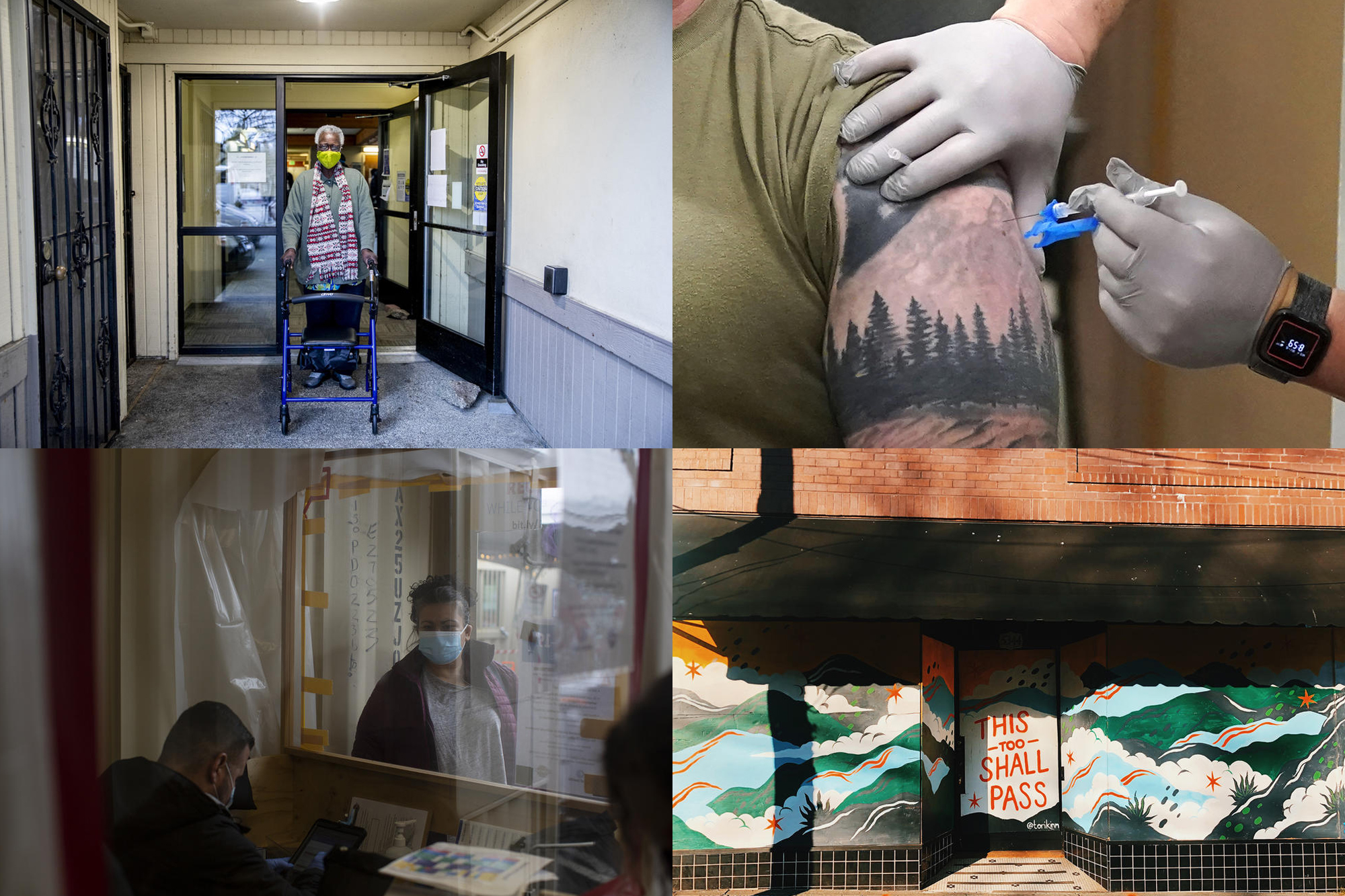 With over half a million deaths to the COVID-19 and a year of statewide shutdowns and economic hardships, a vaccine is giving hope that the worst may soon be over. (Clockwise from top left: Dorothy Edwards/Crosscut; Ted S. Warren/AP; Sarah Hoffman/Crosscut; Shaminder Dulai/Crosscut)

When my editors asked me to write an essay reflecting on the pandemic, I froze.

Since I first wandered the halls of King County hospitals in January 2020 in search of infectious disease doctors to chat with about some “strange disease in China,” I have been running on adrenaline, lurching forward emotionally, anticipating. It’s one thing to clinically analyze systemic failings, and what they might portend for the future, but I don’t linger on my own feelings.

I know what I’d find if I looked inward.

Before the pandemic, it took some work to get scientists, academics and even everyday community members to open up about personal issues. If they weren’t an activist, people kept their cards close when speaking with a journalist. But as soon as I started getting scared about the pandemic, I’d ask people about their feelings and emotional state, regardless of what I was interviewing them about. At first, in February, they were often confused by how carefully I asked them questions about their feelings —  but as soon as people started dying, the floodgates opened.

There had always been a barrier — a removed professionalism — between me and expert sources, and a media-wariness with people on the street. But as soon as the media became the lifeline for information in a global disaster with decentralized communication, everyone wanted to tell me how they were feeling, no matter what we were talking about.

People were scared and desperate to connect. Without being able to see people in person, a phone call from me became more welcome instead of burdensome. I realized the gravity of these conversations. Where I used to try to create a rapport with sources at the end of conversations, I instead started them with a personal connection, making space for emotions. I wanted them to know I knew that I was asking a lot of them right now and wanted to hear just how much else they had going on beyond this interview. I wanted to know how their lives had been upended by the pandemic, what was frustrating or scaring them, regardless of whether that wound up in a draft.

I heard about the hardships of home schooling, the severe silliness of living with your cats while trying to run government agencies, the terror of feeling like you can’t trust your employer to keep you safe, the fear of hurting someone else. I heard about personal struggles with depression from people whose lives I would never have been brave enough to pry in to that way in the “before times.”

Despite not being able to interact with sources in person, I felt closer to them and more responsible than ever for not taking advantage of their vulnerability.

For more than a year, I’ve been collecting and carrying the cumulative emotional weight of a community, relying on it to motivate me on the hardest of days.

And the hardest part is that, for more than a year, I’ve been reporting versions of the same story as anguish mounts, building until it falls apart into a jaded, tired sadness and ennui. There has been more community support and resilience than ever, but we’ve been living the same cycle of closing, reopening and closing again, because we can’t trust our most important systems to serve us or some of our most independent neighbors to care about us.

If I think about my feelings too hard, I worry that what I do doesn’t matter — that no matter how many hardships I expose, the cycle will repeat itself. And if that’s the case, why ask people to relive their trauma with me over and over?

For people like myself — people who can’t afford to stop working or get stuck in their feelings, like health care and other essential workers — we’ve been compartmentalizing for more than a year. We can’t stop to think about the people we’ve lost, or the experiences we’ve missed, or the damage that will linger for years to come. Because if we pause, we might not be able to pick ourselves back up.

When the end of the pandemic comes, it will be only the beginning for how we process it.

I hope at that point, people on the front lines still trust me enough to include me in that process. But I’m terrified of what people will find within themselves when we get there.

This story was first published in Crosscut's Weekly newsletter. Want to hear more from reporters like Hannah Weinberger? Sign up for the newsletter, below.