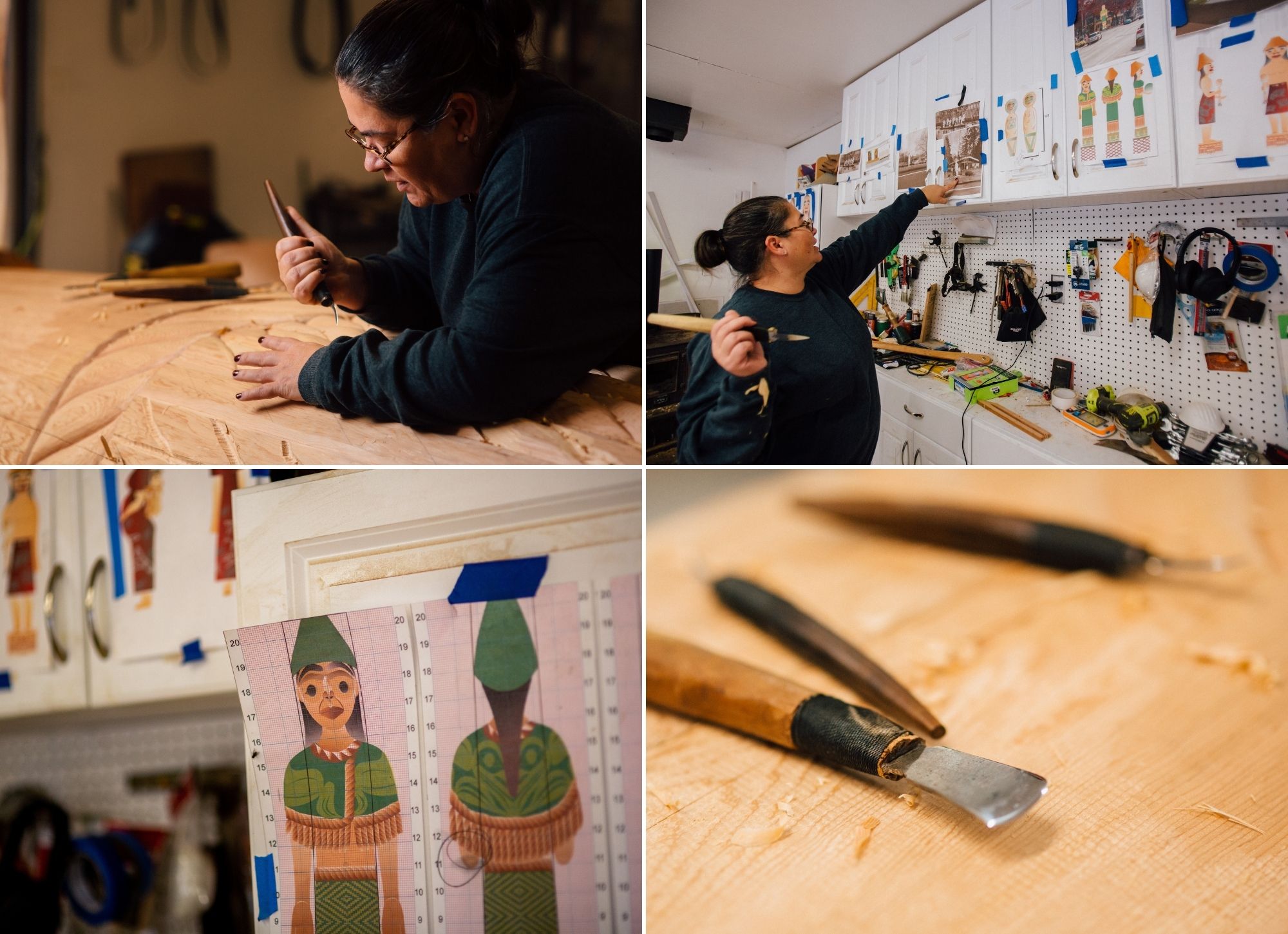 Two decades ago, Andrea Wilbur-Sigo, an artist and member of the Squaxin Island Tribe, brought a 32-inch Salish moon mask she had carved to a Seattle gallery. The gallery told her to come back when she could carve it with a bigger nose, in the traditional style of northern tribes in what is now Canada and Alaska. But that was not the style she was taught by the long line of Coast Salish carvers preceding her.

Another time, she walked into a Vancouver, British Columbia, gallery to deliver a cedar bentwood box she had meticulously carved in the style of her forebears, only to be rebuffed: “No, that is not going to sell.”

Though the piece did end up selling the next day, these reactions were part of a pattern of dismissal that Coast Salish artists have faced for decades, if not centuries. The mainstream art world has long prioritized northern Native art from British Columbia and southeast Alaska over the lesser-known art traditions and styles further south. Some Coast Salish artists even felt forced to work in a style or form that wasn’t traditionally their own, such as totem poles, to get commissions or sell work. Those totem poles near Pike Place Market and in Pioneer Square? Not Coast Salish. Even the original Seahawks logo was based on a Kwakwa̱ka̱ʼwakw mask from what is now British Columbia. Today, it’s still likely that more people are familiar with the U-forms and ovoids of northern “formline” design than the ovals, circles, trigons and crescents of Coast Salish art.

But, as I wrote in my recent story about the regional surge of Indigenous public art, a new era has dawned. Part of the new wave of public Native art is an increase in Coast Salish art — specifically by women whose work has long been devalued as “craft” rather than “art.”

There are so many new projects in the works that I couldn’t fit them all into this 3,000-word story. For Salish Sea Elementary in Seattle's Othello neighborhood, Brian Perry from the Port Gamble S'Klallam Tribe is carving “Guardians of the Salish Sea,” a large cedar welcome pole flanked by two carved canoes that will double as benches. Artists Abbey Pierson (who is of Cowlitz, European and Mexican heritage), Stephen Smith (who is Quinault and Makah) and Paige Pettibon (who is Black, white and Salish from the Confederated Salish and Kootenai tribes) are working on large printed wall decorations to welcome people to the new Odessa Brown Children’s Clinic, which is opening this year in Seattle’s Rainier Valley. And in Ferndale, Lhaq’temish (Lummi) Nation artists Jason LaClair and Yolanda Felix-Wilbur have completed two new murals on the west side of the Pioneer Park Pavilion. LaClair opted for two Coast Salish-style eagles facing each other in the shape of a heart, while Felix-Wilbur depicted the traditions of the potlatch and canoe journey.

This long-overdue trend is a result of yearslong advocacy by people on the front lines and behind the scenes, including prominent artists like Wilbur-Sigo.

“Something new is happening,” she told me during a recent visit to her Shelton studio, which was overtaken by a 21-foot cedar log she was carving into a “welcome figure,” a type of statue traditionally made by Coast Salish people to welcome visitors to their territories. The figure will be named “Grandmother Frog,” one of the “Great Creators,” who in Wilbur-Sigo’s retelling of the Skokomish stories, weaves a rope to connect the different worlds she inhabits: water and land, the Earth and the skyworld.

“This is what I was made to do,” Sigo told me, her hand on this matriarch soon to keep watch over Pioneer Square. “This is why I was created: to help tell these stories in a way that my hands let me tell them.”