Two Crosscut reporters toss around their likes — and dislikes — when it comes to Washington’s franchise fruit. 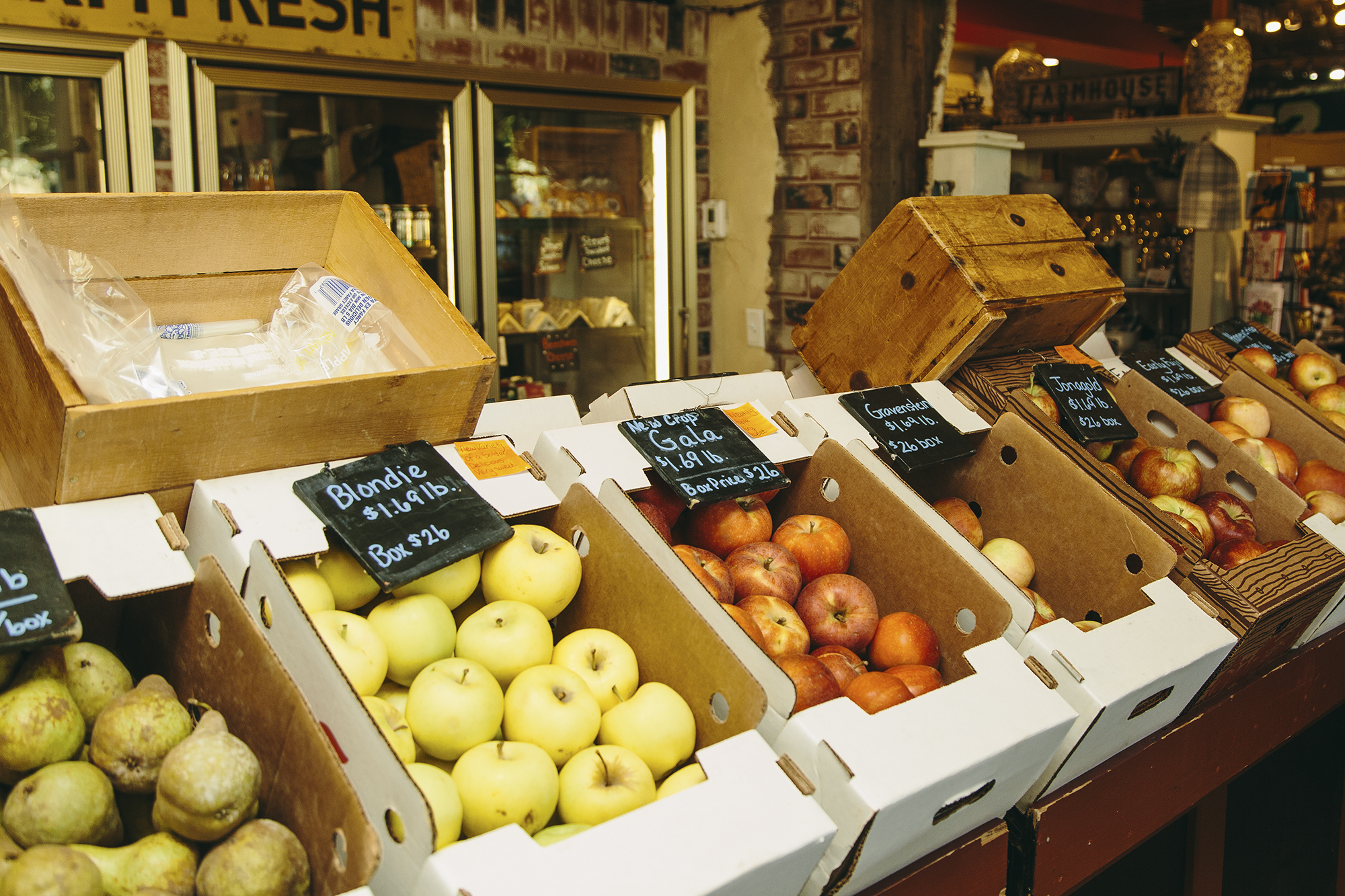 Inside of Barrett Orchards' fruit stand on Sept. 20, 2021. (David Jaewon Oh for Crosscut)

Probably nobody was as eager to take a bite into my latest story on new apple varieties than Hannah Weinberger, Crosscut’s science and environment reporter.

A few weeks ago, I learned she had pretty strong opinions about one apple in particular and that we both are strong advocates for a delicious apple pun.

In quoting a tweet on an article about recent announcements from Apple – the tech company – Hannah made a declaration of her own: “Red Delicious was a mistake.”

Between her intense dislike for Red Delicious and her excitement about my recent story on the business of apple marketing, I was eager to get to the core of her favorite — and not so favorite — apple varieties.

Mai:  I remember eating Red Delicious growing up on the East Coast, but I can’t remember what it tasted like. I just know that sometimes I had one from a bag or as part of my school lunch. I didn’t hate it, but I can’t say I loved (or remembered) it either.

But believe it or not, some people do enjoy Red Delicious. When I asked my followers on Twitter about their favorite apple, one person picked Red Delicious.

“Every time I say that people react with shock & incomprehension,” wrote Joshua, a Yakima resident who tweets at @PatchworkTweed. “Most people have had a bad experience with mealy/mushy ones, but when you get a good crisp Red Delicious, there is nothing better to me. Best tasting skin especially.”

Hannah, I’m sure you don’t get the ap-peel.

Hannah: This conversation is going to be fruitful, I can tell.

Knowing someone likes Red Delicious gives me pause. In my experience, Red Delicious has often been a trip through  strange textures and subdued and watery flavors, packaged in a deceptively pretty package that will somehow release more than its weight in liquid, Mary Poppins’ style.

Most Americans likely experience the Red Delicious that’s been stored for months. That apple likely spent days in an apple bin inside a semi-truck. So by the time it got to us in the Eastern U.S. the texture and taste likely took a hit.

Hannah: I definitely think that’s a core issue. Growing up in Ohio, I didn’t have a direct line to fresh Washington apples! It’s such a luxury to get one within a few days of being picked, if not picking them yourself. So if your favorite apple is the one that’s been sitting in a truck all day, I want to go to an orchard with you and help you branch out to other apples. But also! There are plenty of long-stored-and-traveled apple cultivars I’ve eaten that don’t taste that way, so, it sounds like a little science experiment is in order for us.

We’ve made a lot of progress in apple development since Red Delicious came on the scene and, as you drove home in your story, I think it’s healthy that we pick some new favorites.

Mai: Absolutely! In high school, I was introduced to Fuji apples. I remember my mother purchasing them at the Vietnamese grocery store in Philadelphia, where I spent much of my childhood. I don’t recall if the apple was grown in the U.S. or elsewhere. What I do know is that I loved the sweet taste. It truly was the variety that grew me into an apple fan.

Hannah: For real? That was my “gateway apple,” too! My family was really into Honeycrisps, but I remember my mom coming home from Costco with trays of Fujis the size of my face when I was little, and her having to remind me to pace myself with them.

Mai: Your face still isn’t that big. And those Costco apples are still huge.

Hannah: You’re one smart apple! Anyway, Fujis are such a perfect mobile snack for the child who touches everything. They’re usually not as drippy as other apples, while still being crunchy and sweet, so you’re not leaving an incriminating trail of juice everywhere you go. This is extremely embarrassing, but in high school my cross-country teammates actually held an intervention for me because I ate a lot of apples including the seeds and they were worried I’d get arsenic poisoning. (Note: You have to eat an entire orchard to suffer those effects, and I wasn’t quite at that point.)

Honeycrisps always seemed kinda wimpy. They’re sweet, but like, you can blow on them and they’ll bruise. That’s pretty rich of me to say, as someone who’s never spent decades developing a world-class apple. But here I am speaking my truth about… snack foods.

For context: If I had to decide between sticking a Honeycrisp or Red Delicious in my handlebar bag for a bike ride snack, it’s Honeycrisp, no contest.

I don’t mean to be crabby about apples, but I think the thing that makes me most mad when it comes to Red Delicious, isn’t the apple itself, but what it says about how we grow plants. I hear Red Delicious used to be DOPE, but over time, their looks took precedence over their flavor.

Mai: Over time, my tastes have changed, I don’t eat Fuji apples anymore. They’re too sweet for me.

Hannah: I still like Fujis. But I’ve tried so many different kinds since then that I have many other favorites. I’m also a lot more aware of how apples are produced. Feeling more connected to my food and the land it’s grown in is important to me, and there are a lot of locally grown apples from offbeat cultivars on small orchards that add a little adventure to a food I’ve been eating my whole life.

Mai: These days I go for Pink Lady or Cripps Pink. The right mix of tart and sweetness.

Hannah: I tend to go for crunchy but not watery apples that are also tart and sweet. Of the branded apples: Kiku’s, Envy, Sugarbee’s, and honestly Braeburns even though I know a lot of people just use those for baking. I visited a teaching orchard the other week to pick apples because they have dozens of lesser-known varieties, and got to try a super tart, sweet, crunch apple called a Tsugaru that was so unique. It honestly tasted like candy, but not cloyingly so.

(Spoiler alert: The orchard was out of pickable apples because so many people have been apple picking in the pandemic that they were already picked over.)

Mai: There’s nothing like visiting an orchard or fruit stand for the first bite of some brand new varieties. Mark Barrett, the Yakima farmer I interviewed in my recent Crosscut story, grows several test varieties in small quantities. The customers at his stand serve as taste testers. I definitely recommend checking out a farm if you want to try something new.

Thoughts on the Cosmic Crisp?

Mai: I’ve tried the Cosmic Crisp a few times. It’s pretty good. I’m not ready to displace my favorite with Cosmic Crisp, but I think the hype in the years leading to its release was somewhat justified.

Hannah: I enjoy them! I think it’s so rad how shelf-stable they are, while employing some of the crunchy, sharp qualities I really dig in a fruit.

In what ways has reporting on apples changed your relationship with them?

Mai: Apples were very much in the background growing up. It’s a food item that was everywhere, yet I didn’t think much about the fruit or where it came from.

In writing stories about apple harvests and new apple varieties, I became aware of the amount of work that goes into growing this fruit. Apple growers and those in agriculture, in general, have the task of providing an excellent eating experience every time, but often are at the mercy of things they can’t control, such as the weather.

These new apple varieties have to take into account both consumer taste and the growing process, which is why it takes a long time – decades – for a new variety to even be ready for the grocery store, let alone become a success.

Hannah: Absolutely. The science of food production—of figuring out not only what people want to eat, but how to make the product reliable and sustainable—really plants seeds of  fascination, and it’s doubly cool that this particular type of food has literal roots in our region despite not being a native plant. Covering food production and supply chains, period, really makes you appreciate the fact that *any* food makes it into grocery stores. And why farmer’s markets and CSAs are so essential to ensuring small, local food production that keeps communities resilient.