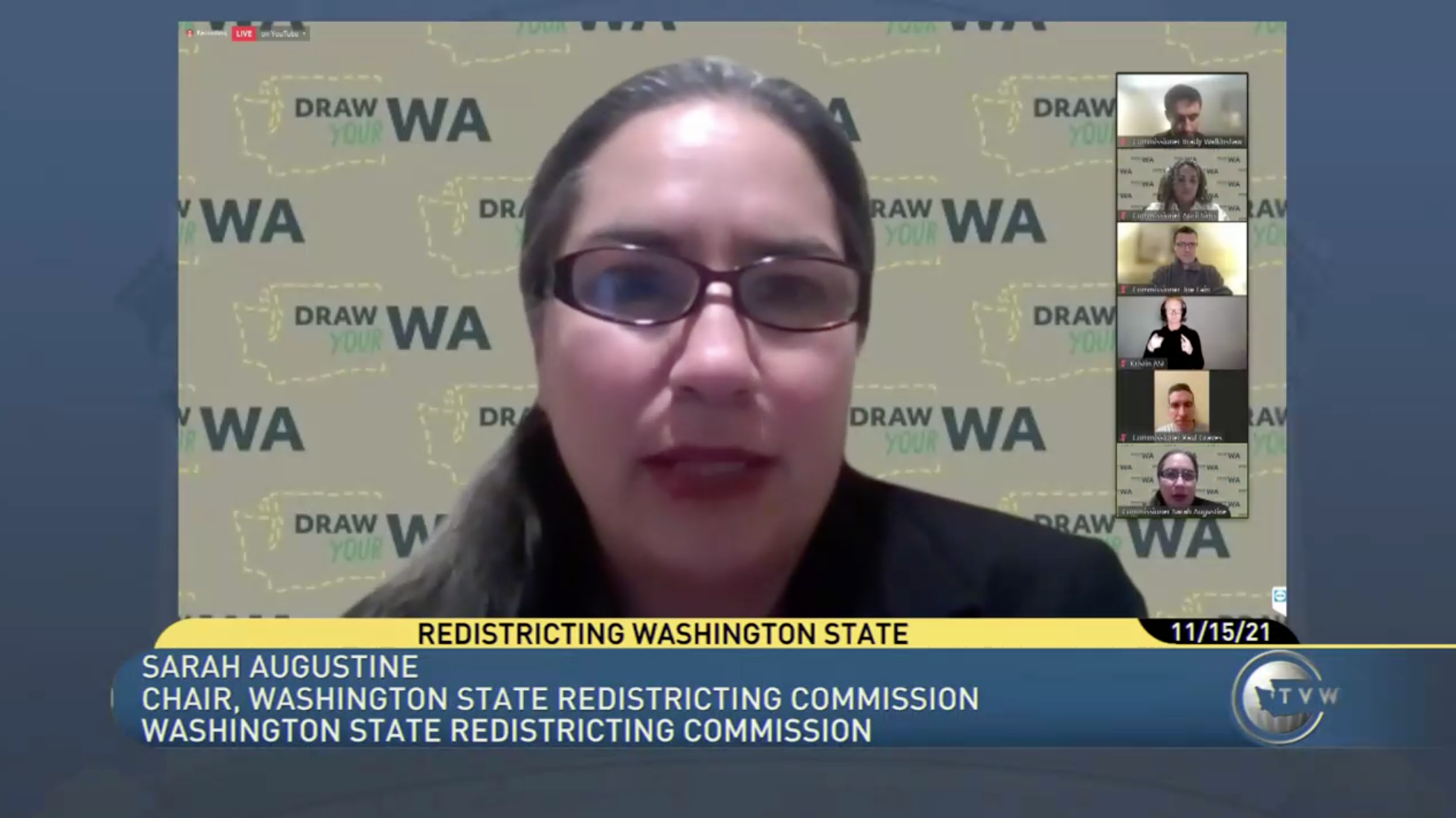 Crosscut politics reporter Melissa Santos and I stayed up past 1:30 a.m. Tuesday. Normally, we work during daylight hours. As our colleague Mai Hoang likes to say, I’m going to “spill the tea”  about why working late was necessary.

No natural disaster or other breaking news was happening. We weren’t worried about meeting a deadline. We stayed up late to do the people’s business.

Keeping a close eye on our government to make sure it is doing its work in a transparent, honorable and law-abiding way is what motivates many journalists. We joined this profession and stayed because we wanted to be government watchdogs.

Back to the tea. Washington’s Redistricting Commission scheduled its final meeting to go from  7 p.m. to one minute before midnight Monday. Scheduling a meeting to last five hours was unusual and our first clue. The bipartisan commission redrawing Washington’s political district maps based on the 2020 census held most of its recent meetings during daylight hours and those meetings did not take hours. Perhaps commission members were hoping they could finish without a bunch of pesky journalists tracking their every move.

On the surface, redistricting may not sound like the most interesting story, but those who understand the concept will tell you that it was probably the biggest political story of 2021, reaching further than who voters chose to be Seattle’s next mayor or whether the Seattle City Council was taking a shift to the right.

The new congressional and legislative district maps will decide whether Latino voters in Yakima will dominate their own political district and gain the power to send more Latinx lawmakers to Olympia. Also up for debate: Will there be a legislative district to represent the entire Yakama Nation, which has been split into two districts, diluting those voters’ power. Among questions closer to Seattle: Will most of Bellevue join the 8th Congressional District again? Will Republicans in King County have any hope of controlling even one legislative district?

Redistricting is a big, important job that every voter has a right to watch in real time. But few voters do. They mostly depend on journalists to do the watching for them.

And lucky for the public, there are still a few journalists staying up late to do that work, when we all would have preferred to watch Netflix or, in my case, sleep. Why does it matter that the people witnessing this work are journalists? I’m getting to that.

Something significant happened Monday night. The Redistricting Commission started its meeting around 7 p.m. and then turned off the video and went into “caucuses.” A bit of background: There are only five people on the commission. The four voting members include two Republicans and two Democrats. The Washington Legislature “caucuses” a lot. This is when the political parties meet in private to work out deals and choose their priorities.

State law allows the Legislature to do this. By contrast, Washington boards, councils and commissions are a lot more restricted on what they’re allowed to discuss in private.

The Washington Open Public Meetings Act allows private discussions about things like real estate deals and personnel issues. There is no exemption for: We just want to chat in private and work out our issues without being watched by the public or the journalists who represent them.

The letter of the law says public meetings can be considered illegal if a quorum of the committee or board meets behind closed doors. Redistricting Commission staff members said they were meeting in “dyads,” which is a fancy way to say they were not breaking the law.

Around midnight, the “dyads” came back to the online public meeting, voted on something they did not discuss or share with the public (or journalists) and said goodnight. The four or five reporters who were still awake — and their editors — sat down to figure out what had happened and wrote stories the public could read a few hours later. Then they kept the pressure on over the following days and eventually learned that the commission had voted on a secret deal they never put in writing and never revealed to the public. Apparently the commissioners hoped that secret deal, with some additional work after their deadline had passed, would result in new district maps.

I know this work is hard and maybe I should commend these government volunteers for taking it on, but instead I’m left scratching my head and thinking words I’m too polite to publish. See my comment above about making sure our government is doing its work in a transparent, honorable and law-abiding way,

None of this would be known if journalists hadn’t been paying attention. But we were. Because that is our job.

Here’s my message to other boards, commissions, councils, etc. that may be wondering if they can get away with the same private deal-making. Holding late night meetings, having private conversations and using fancy words like “dyads” don’t fool the journalists paying attention. We are watching.

This watchdog work isn’t free. Journalism is expensive. You can help ensure someone is paying attention 10 years from now when the next Redistricting Commission does its work by supporting Crosscut and making a donation or by buying a subscription to your local newspaper.

These ideas got a lot of likes on Twitter. But journalists don’t need your likes or your applause. We need your support.