How deaf-blind Seattle transit riders shared their stories with Crosscut

Through interpreters and tactile sign language, they explain how changes to buses and the light rail affect daily life. 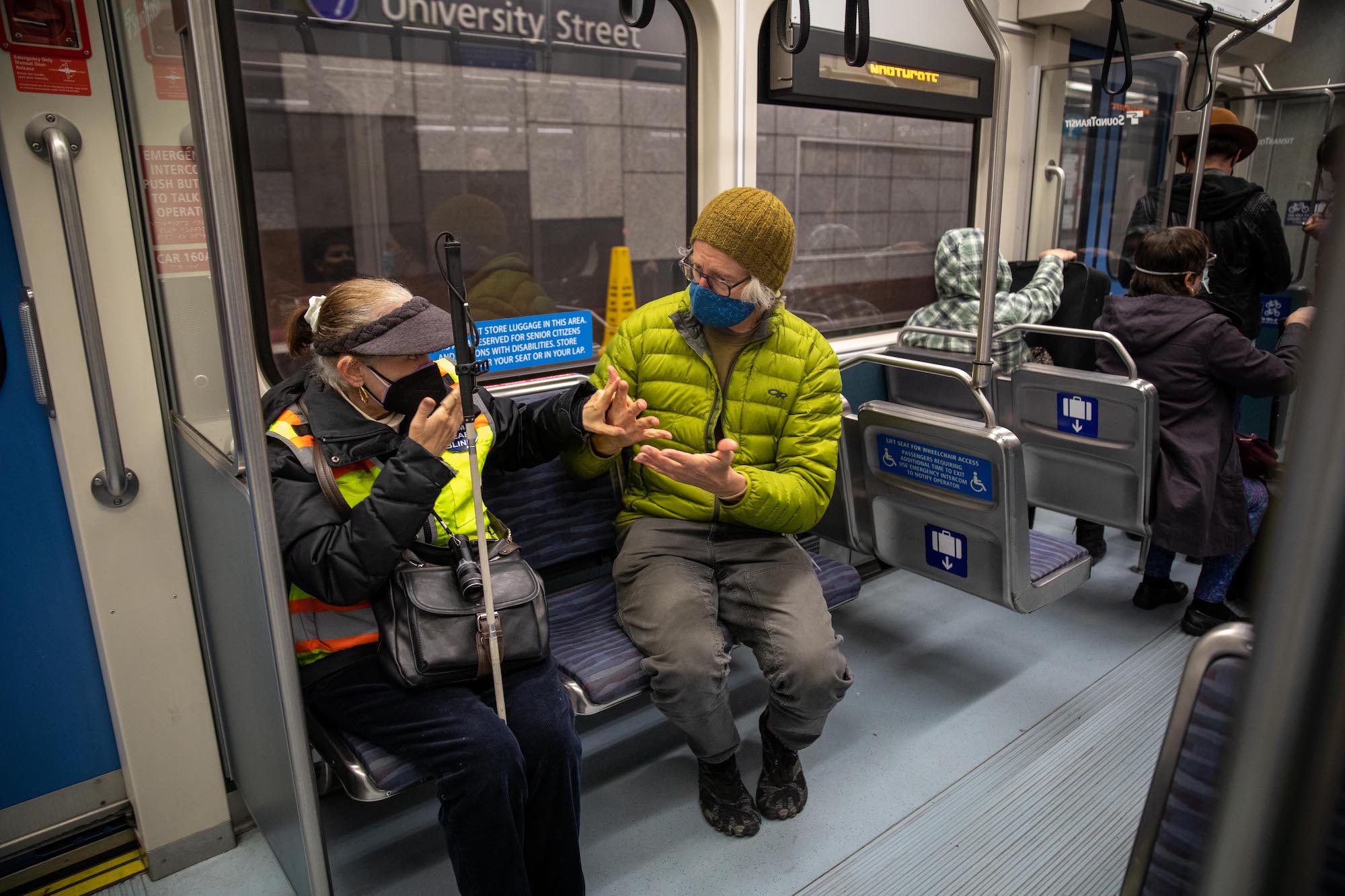 Lynn Chase and David Miller communicate while riding the light rail to the Northgate station. Not fully blind, Chase uses what limited vision she has to detect when the train emerges from the tunnel to know that her stop, the Northgate station, is next. (Lizz Giordano for Crosscut)

I talk fast, too speedy for most people. I often have to remind myself to slow down to be understood, especially during interviews. That thought sat in the back of my mind as I entered a windowless conference room for my first interview involving an interpreter – two, in fact. Speaking slowly would be extremely essential to give space for my questions to be translated into a touch-based sign language.

I was at The Lighthouse for the Blind in South Seattle to interview Lynn Chase and Chris Loomis, for a story about navigating public transit as riders who are both deaf and blind. Chase was first up. Immediately after she entered the room, one of the interpreters introduced herself and listed everyone else present. Everyone around me knew tactile sign language and communicated their own hellos.

To communicate through tactile sign language, the receiver places their hands lightly upon the back of the hands of the signer to feel the shape and movement of the signs. It can be done one- or two-handed.

Chase was led to three pre-arranged chairs that faced each other forming a triangle, and she and the two interpreters took a seat. When not signing, each interpreter kept at least one hand in physical contact with Chase, either on her arm or knee.

About every 15 minutes, the interpreters shift who is the lead. Their fingers never left Chase’s body as they circle her to switch seats. They told me interpreting through tactile sign language is often done in tandem due to the ​​physicality of the job, fingers and hands constantly moving as they translate from a signed language into a spoken one and back. Even when not the lead, the interpreters still help translate.

After I’m introduced, I take a breath and start the way I do almost every interview: by asking Chase to spell her name, noting to myself to slow down. But Chase beats me, and starts to describe the pros and cons of her new light rail route. She uses non-tactile sign language since she was communicating with someone who was sighted.

A few minutes later I started my questioning. We quickly get into a rhythm, all four of us.

Trying to form a connection during any interview is challenging, but having to do that across a language I don’t speak was something I never had to do before.  As I completed each of my interviews for this story, I really wanted to connect with Chase and Loomis directly, not through an interpreter. And the only way to do that was through touch.

Like many parents of young toddlers, I know about half a dozen signs, including thank-you. After my interview with Loomis, I awkwardly tried to mimic how the interpreters slowly swung their hands under his, meeting his cupped palms to initiate communication. I brought our hands toward my face and then back towards him to show my appreciation.

My movement was a little too forceful, so Loomis graciously gave me a lesson on how to guide his hand. For a second, we shared a moment through touch.