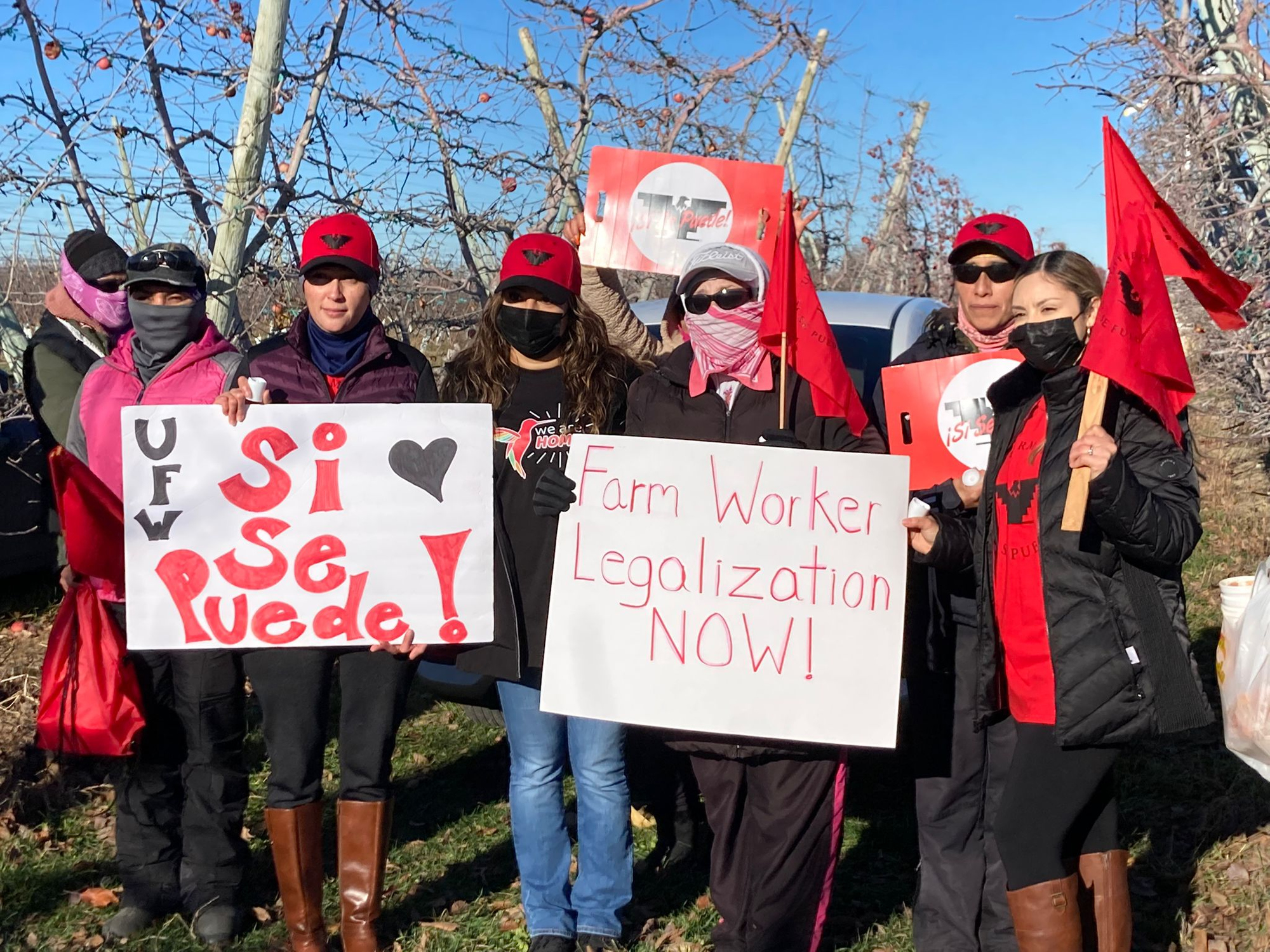 Dozens of Washington farmworkers hosted a vigil in the fields where they worked pruning apple trees in below freezing temperatures in Eltopia, December 14, 2021. They joined nationwide day of vigils demanding the Senate take action and pass the Build Back Better bill, which includes immigration reform, offering temporary status to most undocumented immigrants who came to the U.S. before 2011, granting work permits and a reprieve from deportation. (Courtesy of United Farm Workers)

As COVID-19 spread across Washington, I reported on Yakima Valley fruit-packing house employees staging multiweek strikes over working conditions during the height of the pandemic.

Many of them told me they were concerned about retaliation, but the need for improved working conditions took precedence over those fears.

As a result, I wasn’t surprised how grassroots activism played out in recent pushes for immigration reform as the Biden administration’s Build Back Better plan moved through Congress.

As Crosscut communities reporter Maleeha Syed and I highlighted in our recent package on immigration, many immigrants are tired of others defining their narrative, almost reducing them to pawns in a political back-and-forth.

“To see policymakers, elected officials, play politics with the lives of people like me, with the lives of my family, it’s very disheartening,” Catalina Velasquez, deputy director of the Washington Immigrant Solidarity Network, told me.

Hearing from immigrants and advocates affirmed why it was important for Maleeha and me to tell this story now. When we started working on this package a few months ago, we agreed that immigrants — not politicians — needed to be at the center of our reporting.

“It's common sense that waiting for citizenship can be a grueling, stressful process, but talking with people about their experiences gave me better insight into just how long some immigrants have had to live with uncertainty or rely on relatively temporary options, like DACA,” Maleeha told me after our stories were published.

My story on immigration reform advocacy reminded me of the number of proposals that have gone through Congress in the past two decades with little success. Part of my goal was to understand what it took to advocate for such policies — and have the resilience to push forward despite constantly hitting roadblocks.

And that has undoubtedly been the case with Build Back Better, which aims to improve the economic prospects of the middle class.

Immigrants and advocates had hoped that the legislation would provide the relief they have been denied for decades. But over the past few weeks, those hopes were dashed with the withdrawal of support from Democratic Sen. Joe Manchin and Senate Parliamentarian Elizabeth MacDonough’s rejection of including immigration as part of the budgetary bill in the first place.

Our reporting made clear why immigrants refuse to stay on the sidelines and are unwilling to settle for political compromise. Some advocates may see the Build Back Better plan's parole option, in which immigrants would avoid deportation for several years, as a small step toward progress. But many immigrants are tired of settling for anything, especially temporary solutions that don’t offer a path to citizenship.

“To me, it’s just a Band-Aid that will come off, and the injury will still be there,” Gabie Mendoza told Crosscut. Mendoza moved to the U.S. more than 20 years ago, fleeing an abusive marriage.

It’s easy to get caught up in Congress’ political theater, but as we learned while reporting these stories, immigrants and advocates are determined to make sure their stories aren’t lost in all the debate.

This story was first published in Crosscut's Weekly newsletter. Want to hear more from reporters like Mai Hoang? Sign up for the newsletter, below.

Mai Hoang is the Central/Eastern Washington reporter for Crosscut, where she seeks to provide a broader perspective on what is happening east of the Cascades and the region's relationship with the rest of the state. Find her on Twitter @maiphoang or on Facebook, or you can e-mail her at mai.hoang@crosscut.com.