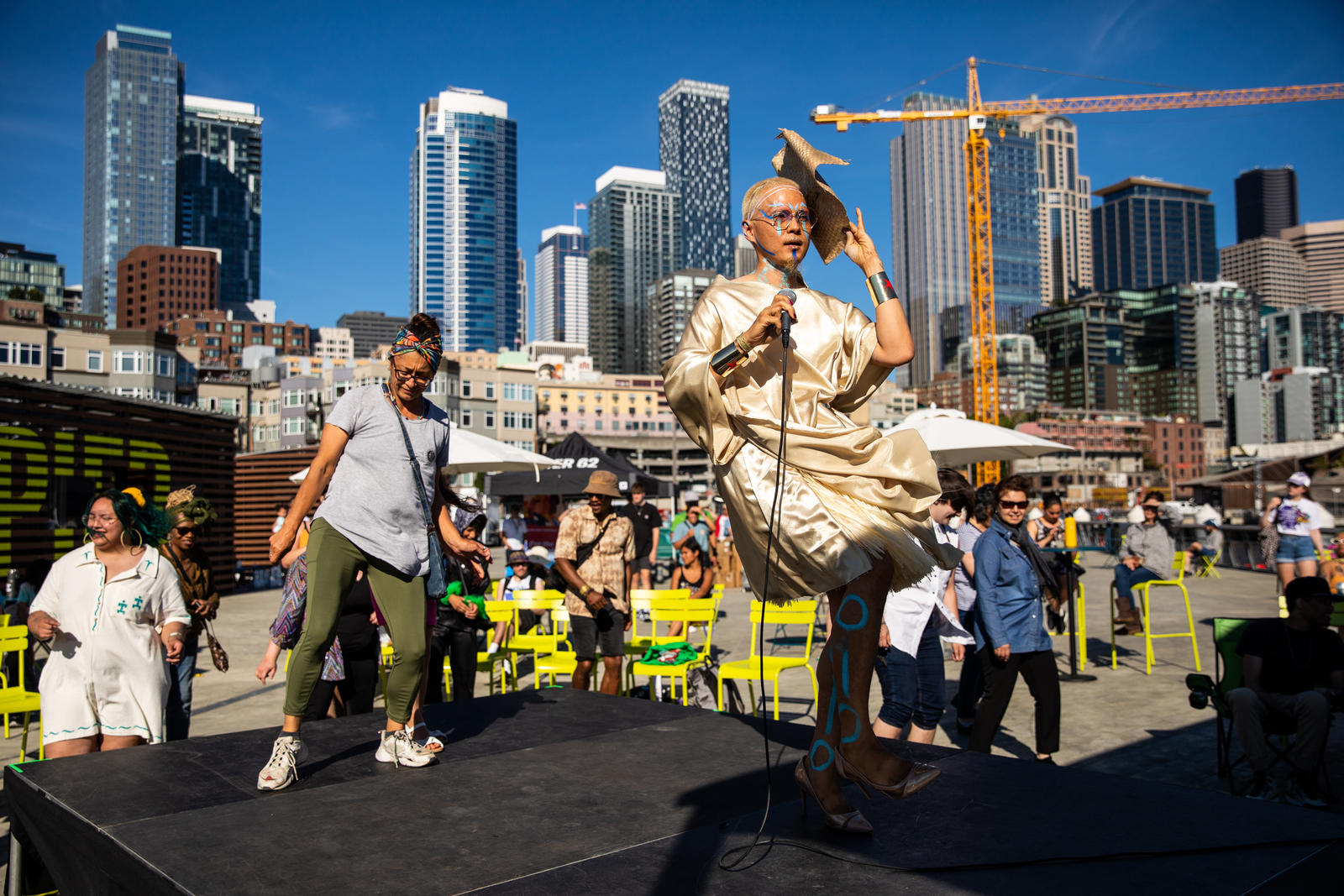 A performer from Guma’ Gela’, a CHamoru Queer art collective, leads the crowd in the Electric Slide at the Indigiqueer Festival on Pier 62 on Saturday, June 25, 2022. (Amanda Snyder/Crosscut)

Artists are a motley crew — you can find as many shades of belief and variety of viewpoints as there are, say, painting techniques. But the reactions to my recent story about a new report predicting a potential exodus of Puget Sound cultural workers were largely in agreement: The situation is dire.

In response to the accompanying reader query, one musician said they were in the process of switching careers to software engineering, “in search of financial stability and benefits.” A theater designer reached out to say they’d moved to Raleigh, North Carolina, in 2019 to escape Seattle’s high cost of living: “We want to move back — Seattle is our home — but it's not feasible at the current time.” Another local artist noted, about the added expense of a studio: “I still make work, but less of it, and show it less often. Paying two rents just to function isn't viable, even working full-time.”

What’s the solution? “Housing. Housing. Housing,” said artist Christopher Derek Bruno in an Instagram message. Plus, he added: affordable and/or subsidized studio spaces (a popular recommendation among those who wrote in, along with a guaranteed income program and creating more housing). On Facebook, Instagram and in my inbox, the twin crises of lack of affordable space to live and work kept coming up time and again.

This story is part of a series called Reviving Seattle Arts

“If Seattle really wanted to EKG the moribund corpse that is the creative sector then it would figure out how to remove the issue of how to live, and work, and show, without having to cover three rents in one of the more overpriced cities on god's green earth,” said artist Christian French on Facebook, noting that what Seattle needs is studios, rehearsal and exhibition spaces “awarded like grants.”

Where? In buildings all around the city, French suggested. Or maybe a ghost mall. Many pointed to the abundance of vacant (downtown) commercial space due to the rise in remote work.

“Recycling high-rise office space is a fabulous opportunity for the arts,” wrote longtime Seattle artist Billy King via email. “In my opinion, the future of the arts is vertical; repurposing office towers to community uses including art studios, theaters, workshops, rehearsal spaces, etc. Now is the time to plan this transformation.”

King even had a specific building in mind: the King County Administration Building in downtown Seattle (also called “The ugliest building in downtown Seattle”’ and “a piece of public art”). The County will be moving out of the space because it’s too expensive to keep up and most of its employees now work from home. As of now, there are no plans for its future. “Why not let the arts and community uses have transitional access to the building?” King wrote. “The whole displaced art scene could be put in that building.”

For French, the seriousness of the moment requires bold change. To continue his EKG metaphor: Seattle needs a defibrillator or two, not “half-hearted fixes.”

Responses in my inbox and various conversations with artists and readers suggest many are looking to our public officials to administer defibrillator paddles to the sector (and maybe some IV fluids as well.). “I want our elected leaders to listen & take action,” artist Janet Galore said on Facebook. Local designer and sculptor Rachel Ravitch notes that pushing for a livable city will require artists to organize — potentially in the form of an artist union — and collectively support a working class agenda.

But some said the audience has to play a role as well. Artists say that even with the pandemic waning they are noticing a drop in attendance and interest in cultural events. “People need to buy art from local artists,” one local artist wrote. And people who have the means need to support the fine arts in greater quantities and more often. “How do we invite the new money into the conversation… How do we encourage them to spend money on cultural activities?” one artist pondered.

As a journalist, the problem sounds familiar — in order to keep doing our work, we need people to support it financially. In that realm, there were some other suggestions that caught my eye: Businesses that gave each employee a stipend to spend at local restaurants as a measure of support during the pandemic could do the same for the arts. And: Why can’t the city launch a voucher program for art purchases, à la our Democracy Voucher program? As one artist commented: “People don’t know that they need to support/pay for art if they want to continue to experience it.”