What to expect from our new Crosscut Reports podcast

Host Sara Bernard teams up with Crosscut reporters to dive deeper into the stories that shape Washington. 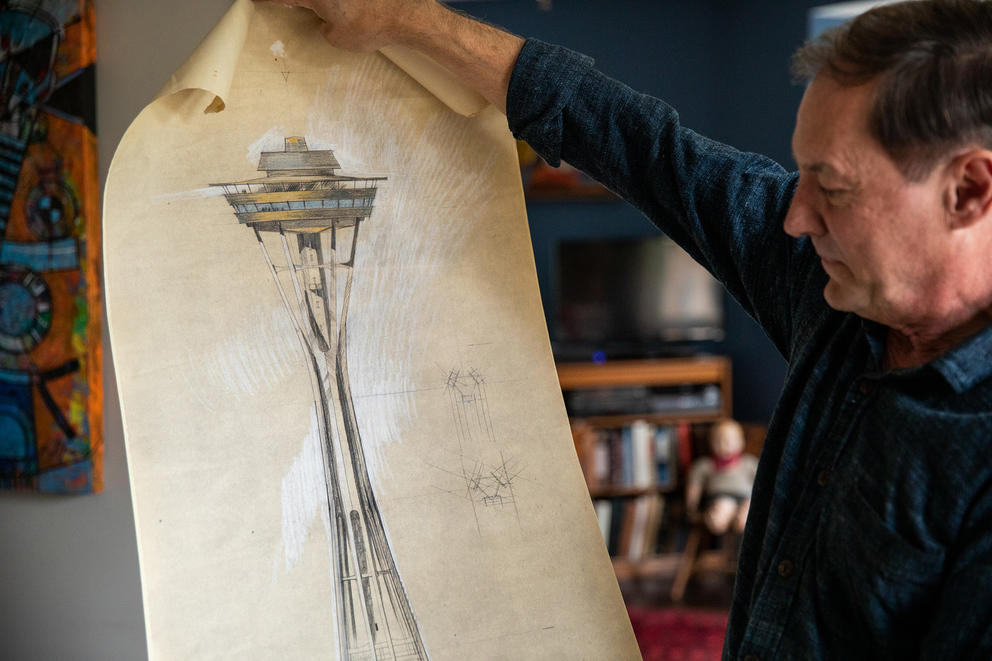 Peter Steinbrueck unrolls a drawing of the Space Needle by his father Victor Steinbrueck in his home on Friday, June 10, 2022. The drawing was among files recently discovered in Victor's Eastlake home. The files are the subject of the first season of Crosscut Reports. (Amanda Snyder/Crosscut)

To understand how we ended up launching a new podcast called Crosscut Reports, you have to go back to the very beginning of the pandemic. Which, I know, no one wants to talk about the pandemic.

But back in March 2020, the pandemic was the only thing that anyone wanted to talk about. So much so that every editorial project that we were working on at the time — every video series, every live event, every article — was taken off the calendar. Like every other news outlet on planet Earth, we made a hard pivot toward this new, engrossing threat.

That included our podcast operation, which at the time was nascent. We had some success with our first title, Crosscut Talks, and, as news of the novel coronavirus was spreading, we were looking to expand to a second. The pandemic became the only choice, so producer Sara Bernard began inviting Crosscut’s reporters and editors to the mic to share the pandemic stories that they were reporting.

The result was the first season of This Changes Everything, Crosscut's inaugural narrative journalism podcast. The stories were vivid and personal and incredibly relevant — and the production brought our journalists together even as they were keeping social distance. The 10 episodes now stand as a time capsule of a very particular moment for our newsroom and our region and for the people whose stories our reporters were telling.

Listen to the first episode of Crosscut Reports here:

Sara has produced two more seasons of This Changes Everything. And those seasons — one on the movement to defund the police, the other about the pandemic's impacts on education — are insightful explorations of transformational events. But the work to create them was immense. And as the Crosscut newsroom shifted back to covering a range of topics, beyond the seismic ones, This Changes Everything began to feel out of sync with the newsroom.

"Ultimately it became too exhausting to try and carve a path through this vast societal chaos," Bernard says.

Crosscut Reports, which debuted this week, is that podcast. And it hearkens back to that first season of This Changes Everything, both in the collaboration at the core of its creation and in its focus on the people at the center of the stories.

"To me, Crosscut Reports is an opportunity to showcase the reporting being done in the Crosscut newsroom," says Bernard. "I aim to collaborate with reporters on stories they're working on that have the potential to come to life in audio, either because of audio's potential for emotional depth and intimacy or a serial podcast's ability to unfold complex and nuanced investigations over several chapters."

Crosscut Reports seasons will be shorter — the current season about architect and activist Victor Steinbrueck is three episodes long. The seasons will also be more frequent — the election-themed second season will debut in October. But the ultimate aim will remain ambitious.

"The stories in each season of Crosscut Reports will ask big questions," says Bernard. "But the focus will be narrower, the goals more manageable."

You can subscribe to Crosscut Reports on Apple Podcasts, Spotify, Amazon or wherever you get your podcasts.