How election night played out in our newsroom

Who calls each race? Why do results take so long? And what is the consensus on potato pizza? 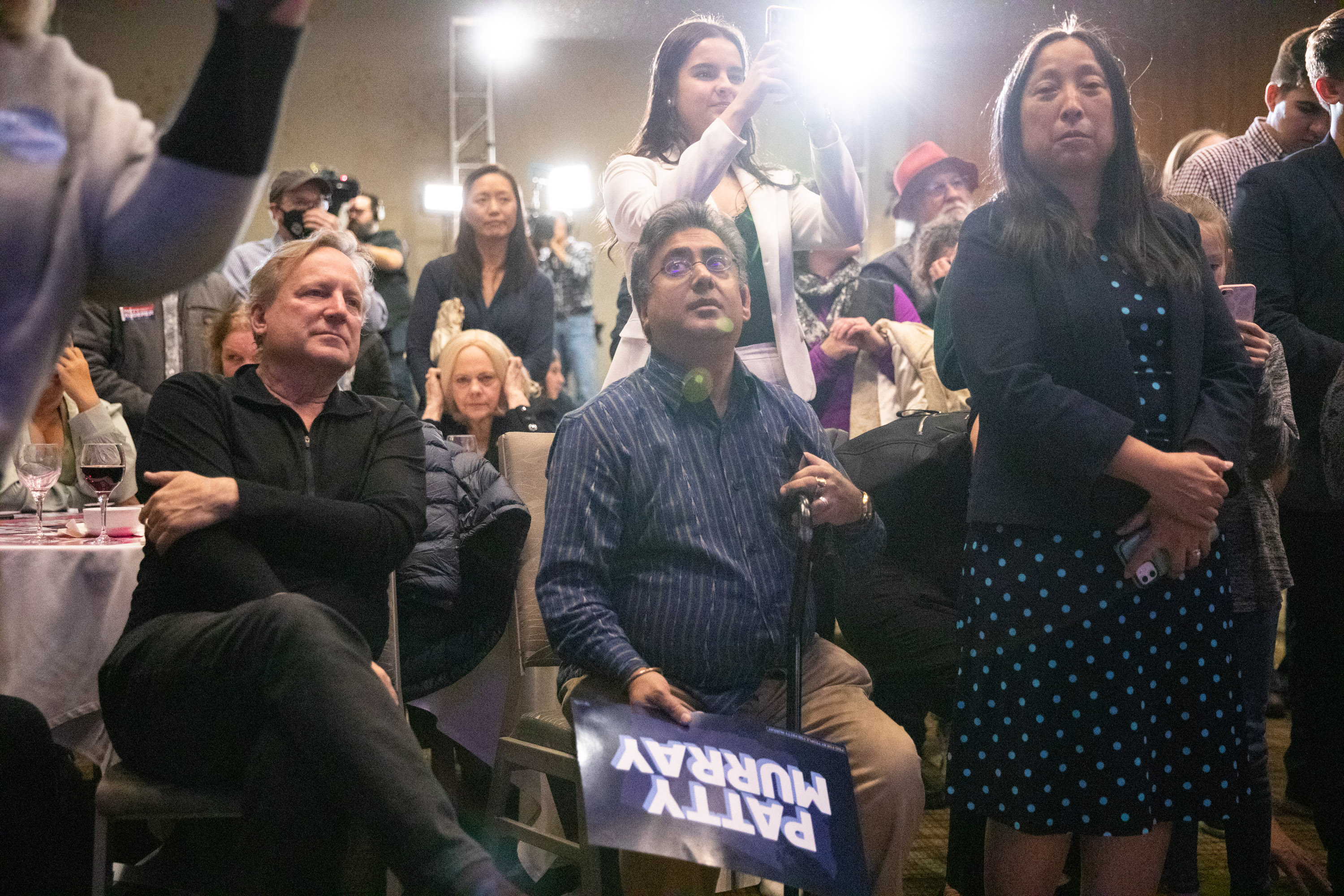 Supporters of U.S. Sen. Patty Murray celebrate her leading the polls at The Westin Bellevue on Nov. 8, 2022. (Amanda Snyder/Crosscut)

The Crosscut news team was back in the newsroom for election night this past week – the first time since November 2019.

It was interesting and fun – and also very cold – but I am not willing to say it was “better” than pandemic Election Days in the comfort of my own home.

You’re probably wondering why it was cold. That was my fault; I forgot to ask our facilities team to keep the heat on. They’re used to us working mostly from home and probably didn’t even realize we were going to be in the office for election coverage. It was a minor inconvenience but probably the funniest part for anyone passing through and seeing me wearing a down coat and others with fingerless gloves.

In addition to the pandemic, a few other things have changed in the Crosscut newsroom since I began this job in December 2019. We now have a TV in the newsroom and The Associated Press Seattle bureau in the room next door. Both of these changes colored our election-night experience.

The TV helped us follow the results from across the nation and get a hint of what was to come in Washington state. Our own Crosscut/Elway poll also gave us some very good hints about what to expect. But as our poll director Stuart Elway likes to say: The best poll of all is when voters cast their ballots.

Having the AP next door gave us a few more very smart journalists to talk to as we were waiting for the first vote counts to be posted and getting ready to publish our election-night stories. When the AP called the race for Sen. Patty Murray, we updated our story and said that the race was decided. Like many other journalism organizations, we rely on the AP and its scientific way of calling races because we do not have the expertise or the formula for making these decisions on our own. They look at the current vote count, what votes are yet to be counted, past trends and other factors about each particular election.

The Associated Press called the U.S. Senate race after the first ballot drop on Election Day. Patty Murray beat Tiffany Smiley by an initial count of 57% to 42%.

On Thursday night, two other races were called after a candidate conceded. In the 8th Congressional District, incumbent Democrat Kim Schrier defeated Republican Matt Larkin 52% to 48%. The 8th District contest was one of two in the state with very high national stakes. Washington’s 3rd Congressional District — which was called Saturday evening — helps determine whether Democrats keep their razor-slim majority in the U.S. House. Gluesenkamp Perez beat Trump-backed Kent by a tight margin.

The Secretary of State race was also called Thursday night after nonpartisan candidate Julie Anderson conceded. The win makes Hobbs – who was temporarily appointed to the position last year – the first official Democrat Secretary of State since 1960. He is also the first-ever person of color to win the office.

Many ballot initiatives in Washington are not yet set in stone. Early counts suggest voters will approve even-year voting in King County and a minimum-wage hike in Tukwila, but Seattle's Initiative 1A and 1B that would determine a new voting system remain split.

The machines that count your ballots are still turning their wheels. As races continue to be called in the coming days, check in through our live results page.

One more note on election night: We tried a different pizza place for our traditional dinner, and one of the pizzas included potatoes. I learn new things all the time working in the Crosscut newsroom. This election night I learned that potatoes on pizza can be delicious, especially if they are smothered in pesto.