Cheers and catcalls: The complex histories of Seattle sports stadiums

Sports arenas and stadiums have long been the site of major civic battles. 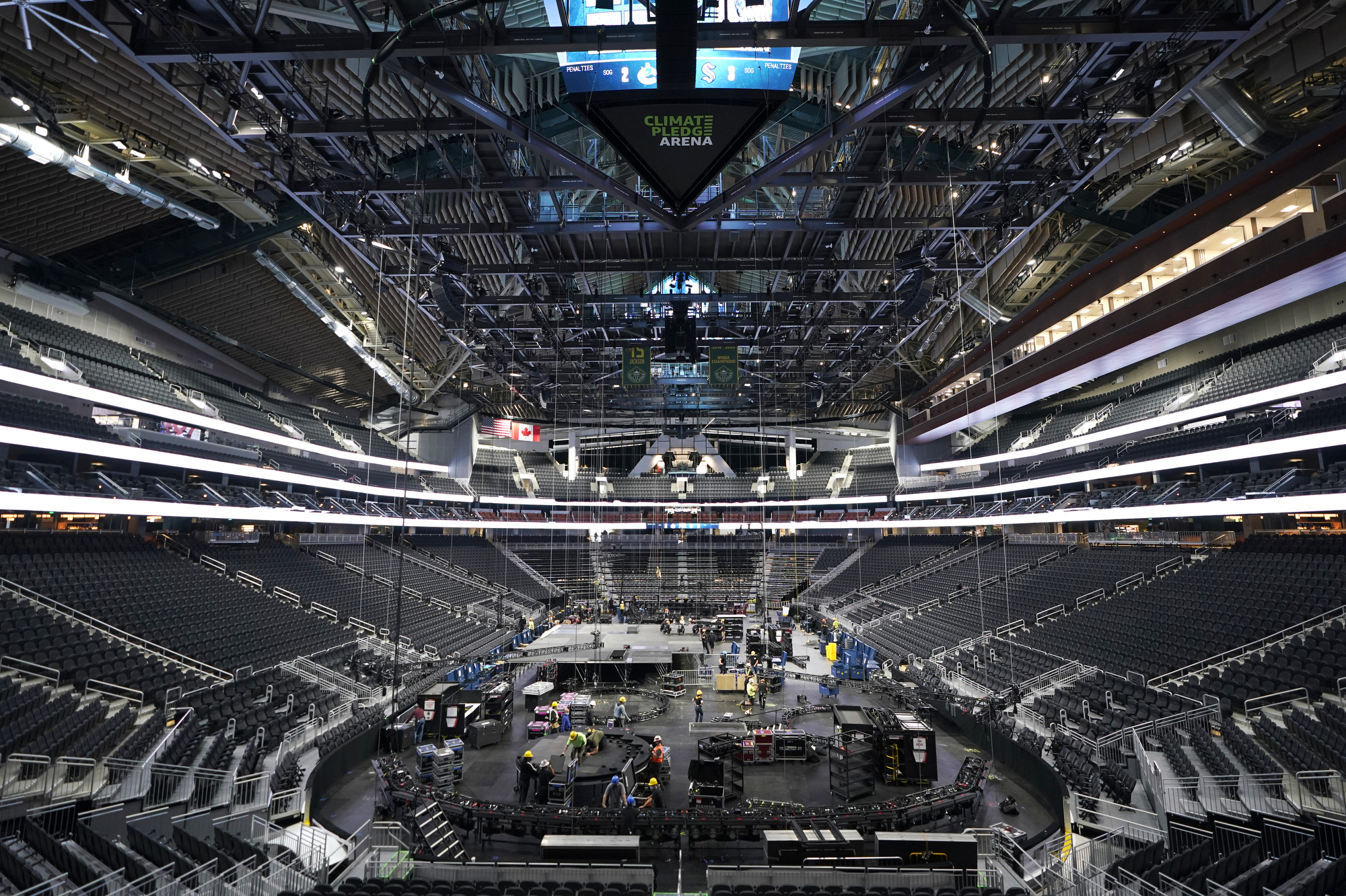 The floor and seating areas of Climate Pledge Arena are shown Wednesday, Oct. 20, 2021, during a media tour ahead of the NHL hockey Seattle Kraken's home opener Saturday against the Vancouver Canucks in Seattle. The historic angled roof of the former KeyArena was preserved, but everything else inside the arena, which will also host concerts and be the home of the WNBA Seattle Storm basketball team, is brand new. (AP Photo/Ted S. Warren)

Sports stadiums and arenas have long been the site of major civic battles in Seattle. The story of any major facility constitutes a saga of acrimonious factions, lawsuits and protests. But stadium construction can also salve old wounds and offer new promise.

The past 50 years offer abundant examples. A lawsuit in the early 1970s challenging the construction of the voter-approved Kingdome was filed by a group called Citizens Against Stadium Hoax, or CASH. In addition, Asian-American activists protested its location near the Chinatown-International District and its potential impact on that neighborhood, already deeply disrupted by freeway projects.

Public financing of what are now Lumen Field and T-Mobile Park — homes to the Seahawks, Sounders, Mariners and soon the Reign — was opposed by a group, among others, called Citizens for More Important Things. The opposition was fueled by the idea that Seattle should not be held hostage to millionaires and billionaires who exerted extortionate leverage by threatening to leave town if citizens didn’t pay up. After voters weighed in, the city adopted limitations on public financing of sports facilities.

And the debate over whether to build a new basketball arena — often referred to as a Sonics Arena — blew up in controversy over its proposed location in SoDo and the tactics employed by hedge-funder Chris Hansen to try and swipe an NBA franchise from Sacramento. The reason we didn’t, and still don’t, have an NBA team is that Sonics ownership, then led by Howard Schultz of Starbucks fame, wanted major publicly funded upgrades to Key Arena at Seattle Center that were ultimately refused. A publicly-funded complex in Renton was also shot down, which prompted the team's new owners to move the Sonics to Oklahoma City. That opened a still-bleeding wound among local sports fans. 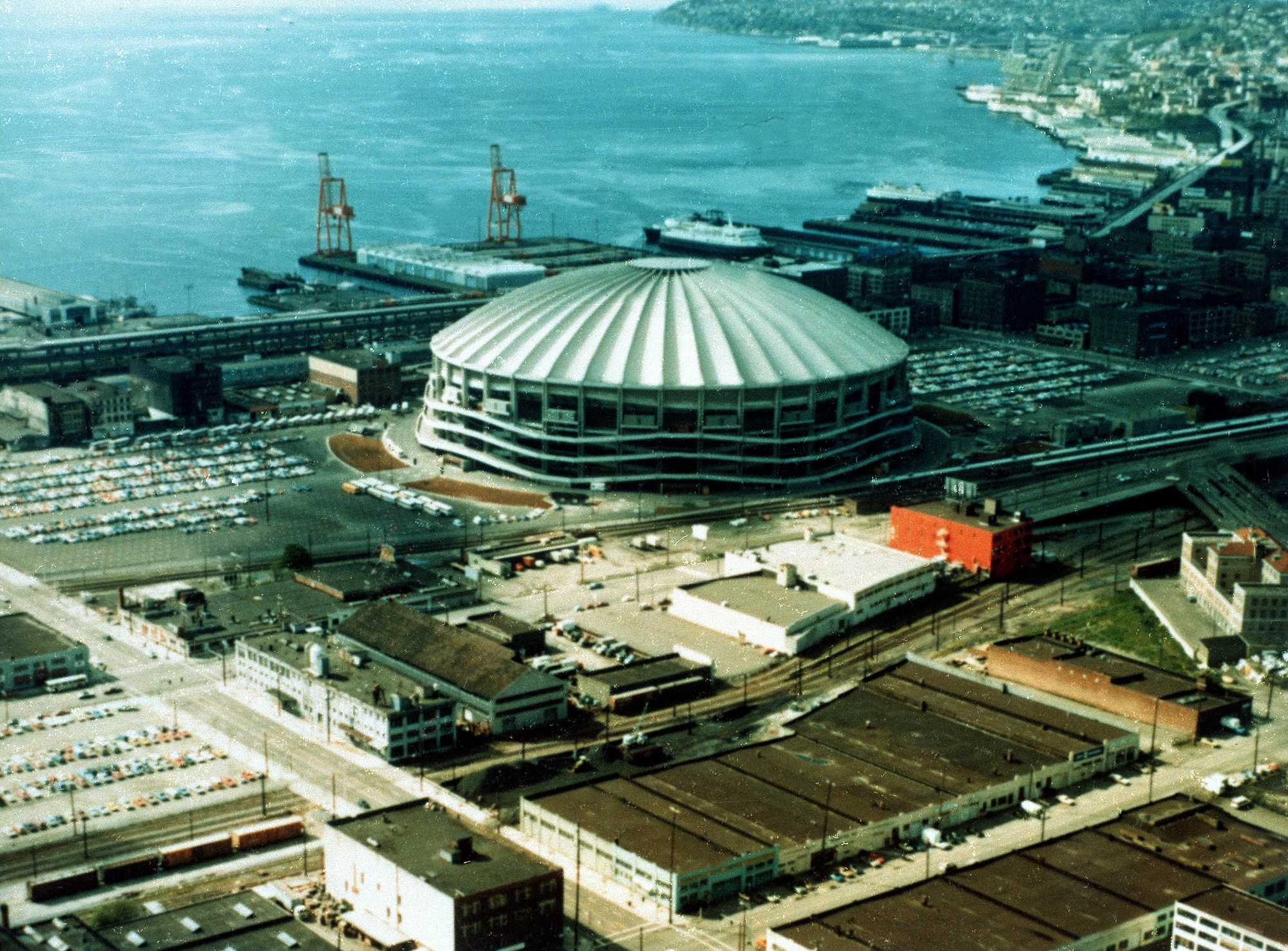 The Kingdome stadium, former home of the Seahawks, Seattle Mariners and the Seattle SuperSonics, is seen in Seattle, Wash., in this undated AP photo. (AP Photo)

The Kingdome stadium, former home of the Seahawks, Seattle Mariners and the Seattle SuperSonics, is seen in Seattle, Wash., in this undated AP photo. (AP Photo)

In the discussions over Hansen’s proposed SoDo arena, it was broadly assumed that renovating Key Arena at Seattle Center was a no-go, that it could not possibly be upgraded to current standards. Hansen’s proposal looked like it might solve that problem. The Key, however, was owned by the city, and if a new state-of-the-art arena were built in SoDo, the landmark Key would likely become the bulkiest of white elephants. The city considered alternate plans, including demolition, but nothing really penciled out.

Still, a private Seattle Group consisting of AEG, Hudson Pacific Properties and the Oak View Group, came in and offered to make dreams come true. With the city's approval, they footed the bill to renovate what is now Climate Pledge Arena for a new hockey franchise, the Kraken, and make it right for the WNBA Storm, concerts and potentially, someday, a new NBA team.

While there were many who wanted to see the old arena saved and renovated — it was, after all, a landmark left over from the 1962 Seattle World’s Fair and built by the “father” of Northwest modern architecture, Paul Thiry — everyone was somewhat skeptical it could be pulled off. The renovators would have to dig down under the existing foundations while keeping the iconic roof intact.

The task seemed Herculean. And it was.

I write this having attended the annual gathering of the Structural Engineers of Washington for its fall forum, held at Town Hall last month. I was a speaker, but the main attraction were three structural engineers who spoke about sports stadium and arena projects across Washington state. While we blew up the Kingdome, in 2000, before it was paid for, the engineers say that stadiums and arenas are among the most frequently repurposed and rebuilt facilities. People grow attached to place and the powerful traditions of sports. And it makes sense. Sports venues are often sites of the most intense collective experiences. 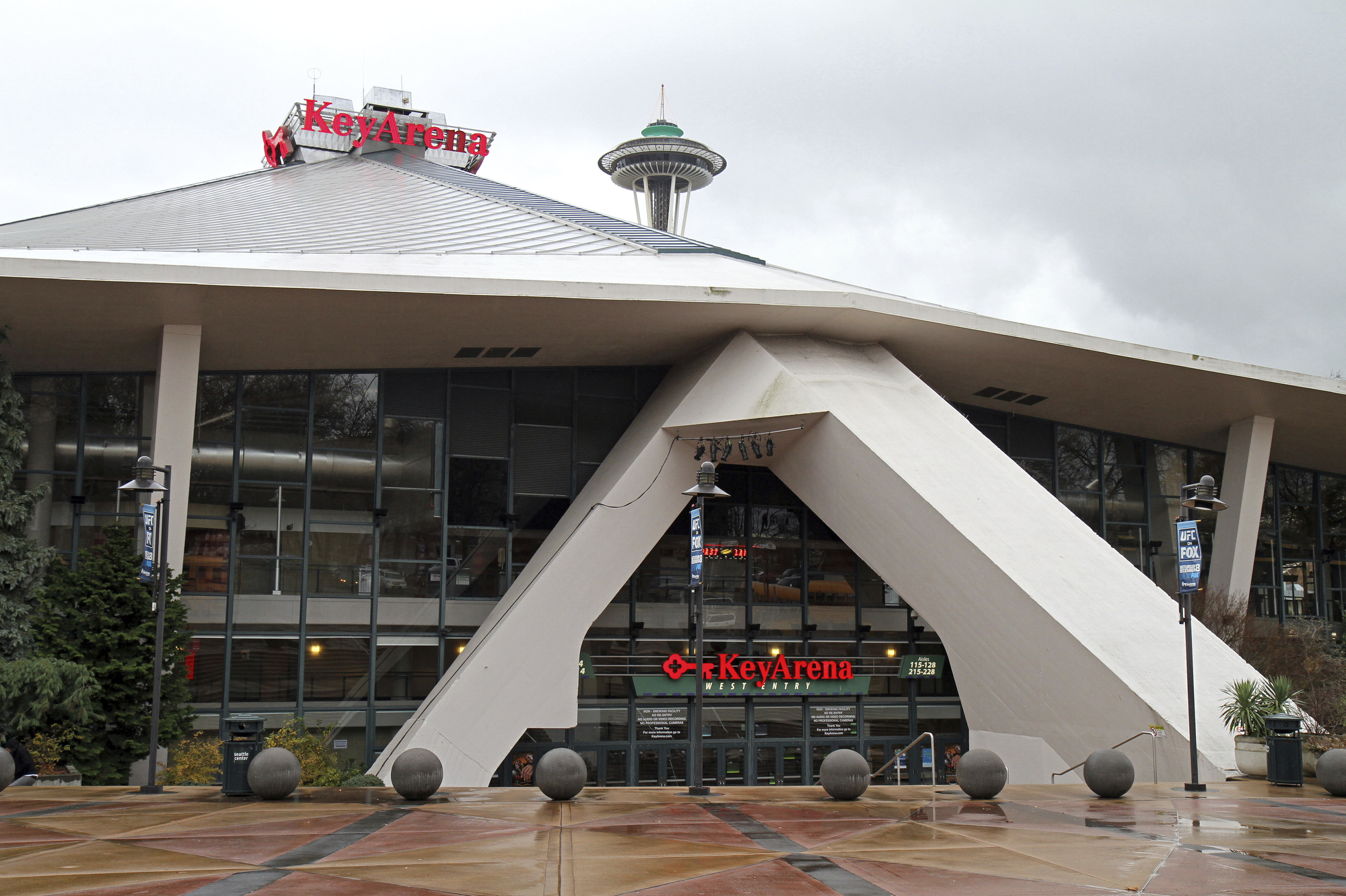 Engineer Mark Aden of DCI Engineers talked about the expansion of Martin Stadium in Pullman, the high temple of Cougar football at Washington State University. He described how they expanded the stadium by using an existing information technology building to hold up large grandstands. They couldn’t displace the solidly built building housing campus tech nerds, so they built on top of them; the old IT facility was so sturdy that it had extra capacity to support part of the new football stadium. Nerds helping jocks, who knew?

John Magnusson, principal at Magnusson Klemencic Associates, has worked on just about every sports complex in the region. This includes the 1995 renovation of Key Arena, Lumen Field, T-Mobile Park, the expansion of Husky Stadium and the renovation of nearby Hec Edmunson Pavilion, a 1920s structure that still looks the same on the outside but has been brilliantly modernized inside. No more view-blocking columns, for one thing. He also gave a blow-by-blow account of the collapse of a new Husky Stadium grandstand as it was being built in the ’80s. Everyone in Seattle then remembers how its cantilevered roof folded and fell down. No one, fortunately, was killed, and the project was still completed on time.

But the star of the event was a detailed look at what it took, structurally, to adapt Climate Pledge Arena. Steve Hofmeister of Thornton Tomasetti in Kansas City, oversaw the structural work. He has worked on stadiums and arenas all over the country. If anything, the wonky discussion he led confirmed the near insanity of the project.

Hofmeister said one of the huge challenges was building an arena after the roof was on. Most big stadium and arena projects, he reminded us, put their lids on last. That way you can use tall equipment without worrying about hitting a ceiling. When engineers saw the bid paperwork, they realized, Hofmeister said, that “they were going to have to build a ship in a bottle.”

Only the “bottle” was a massive, landmarked roof that weighs 44 million pounds. In addition, the engineers dug deeper to get the arena configuration they wanted, and expanded the space underground out beyond the roof line. That meant digging under massive concrete buttresses that hold the thing up, refastening them to a new, deeper foundation and finally bringing the whole thing up to current seismic code. 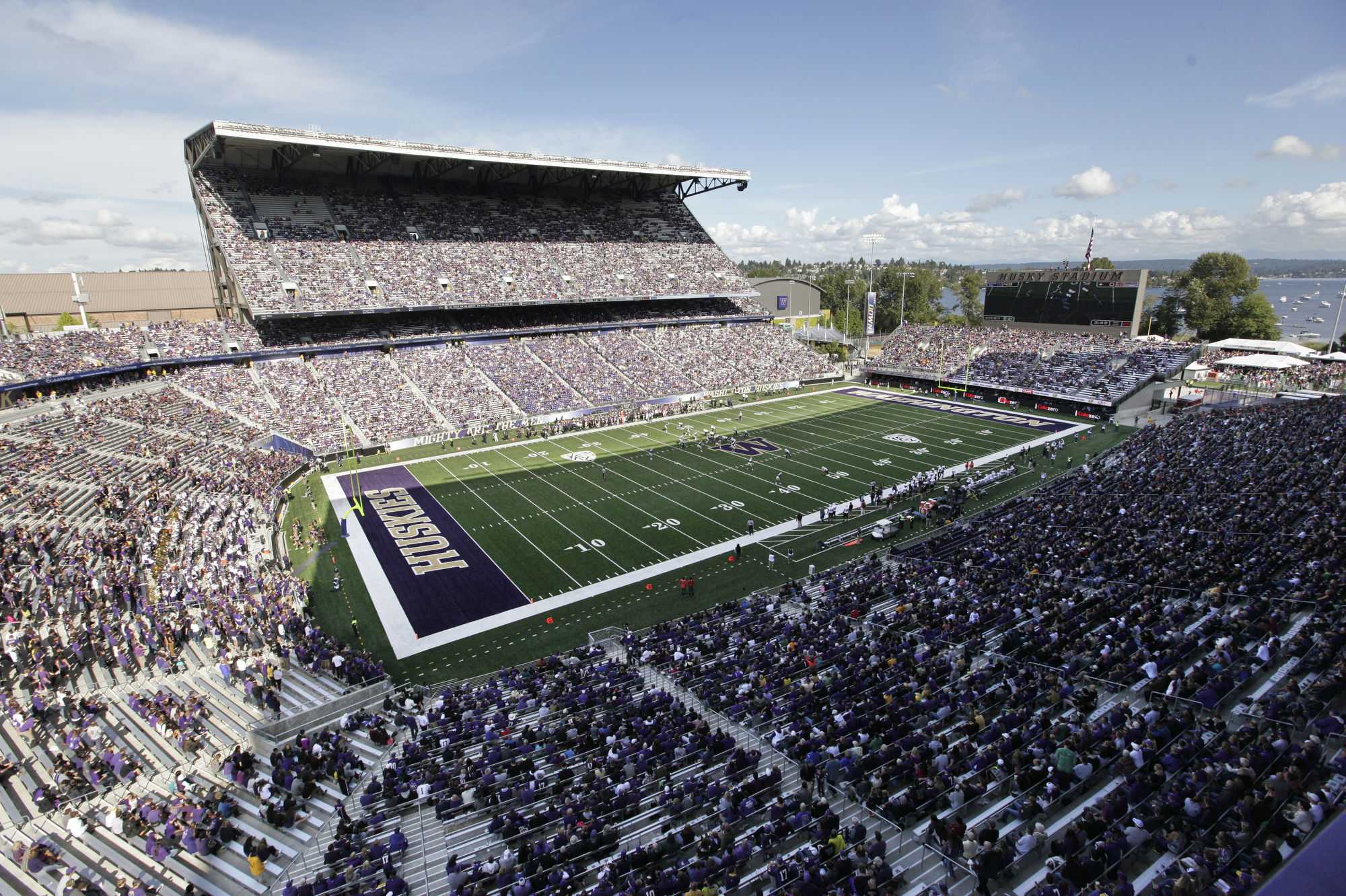 Husky Stadium is seen during the the second half as Washington plays Idaho State in an NCAA college football game Saturday, Sept. 21, 2013, in Seattle. (AP Photo/Elaine Thompson)

Husky Stadium is seen during the the second half as Washington plays Idaho State in an NCAA college football game Saturday, Sept. 21, 2013, in Seattle. (AP Photo/Elaine Thompson)

Forget the scoreboard, lighting and sound tech, the amenities, the underground tunnels for equipment and truck access, and the underground fan parking. They had to do it all while creating a virtually all-new facility underneath it. No wonder the original $700 million estimate for the project ultimately came in at $1.1 billion. It is rather miraculous that anyone embraced the challenge. Much of the cost is literally sunk, underground and out of sight.

It's worth remembering the history of the land where this megacomplex now stands. Marga Rose Hancock, a local historian who has written about the architect Paul Thiry, confirmed to me what I had heard: that the roof of the arena was designed to suggest a Coast Salish cedar hat. She also reminded me that, before white settlement, much of the Seattle Center site was cleared by Indigenous peoples and referred to as “Potlatch Meadows” by early settlers.

It apparently was not a potlatch gathering site as many people thought, but rather a clearing made by Native peoples to hunt or catch ducks flying between Lake Union and Puget Sound. Hancock, who attended the Town Hall event, rose at the end of the engineers’ presentations to acknowledge Native American Heritage Month and express how important it was that the iconic Thiry-designed roof/hat at Potlatch Meadows was preserved. Certainly, Seattle Center itself has become a community gathering place for the city.

Fans attend games. The 12th Man shouts loudly to help the Seahawks win — and they stomp their feet so much it registers on the seismic monitor at the University of Washington. Husky fans have the most beautiful setting in college football, with gorgeous scenery to distract from the bitterness of a season, well, like this year's. And at Martin Stadium, Cougar football is literally supported by the invisible computer lair of computer scientists below — a kind of metaphor for the current economy. We can enjoy the games and events because we don’t have to worry about all the technical engineering and civic decision-making that hold it all together.

No wonder they call them sports complexes. 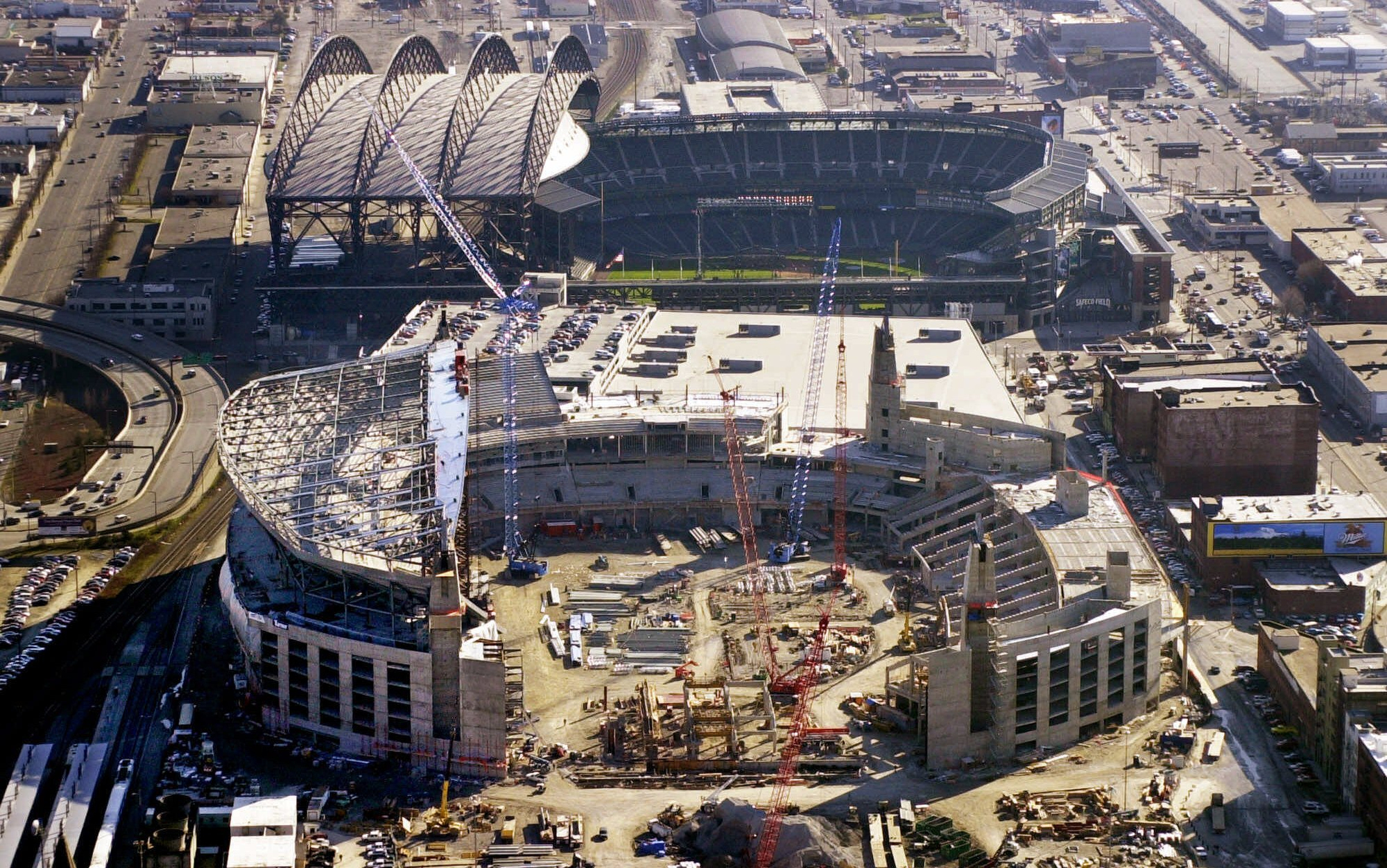 The Seattle Seahawks football field, foreground, takes shape on the site of the former Kingdome as the Seattle Mariners' ballpark stands behind Tuesday, in this Feb. 27, 2001 file photo. (AP Photo/Elaine Thompson)

The Seattle Seahawks football field, foreground, takes shape on the site of the former Kingdome as the Seattle Mariners' ballpark stands behind Tuesday, in this Feb. 27, 2001 file photo. (AP Photo/Elaine Thompson)