Bad times are nothing new: Lessons from past political upheaval

Fifty years ago, America was at a breaking point. Here's what I learned then that might help us through today's turmoil. 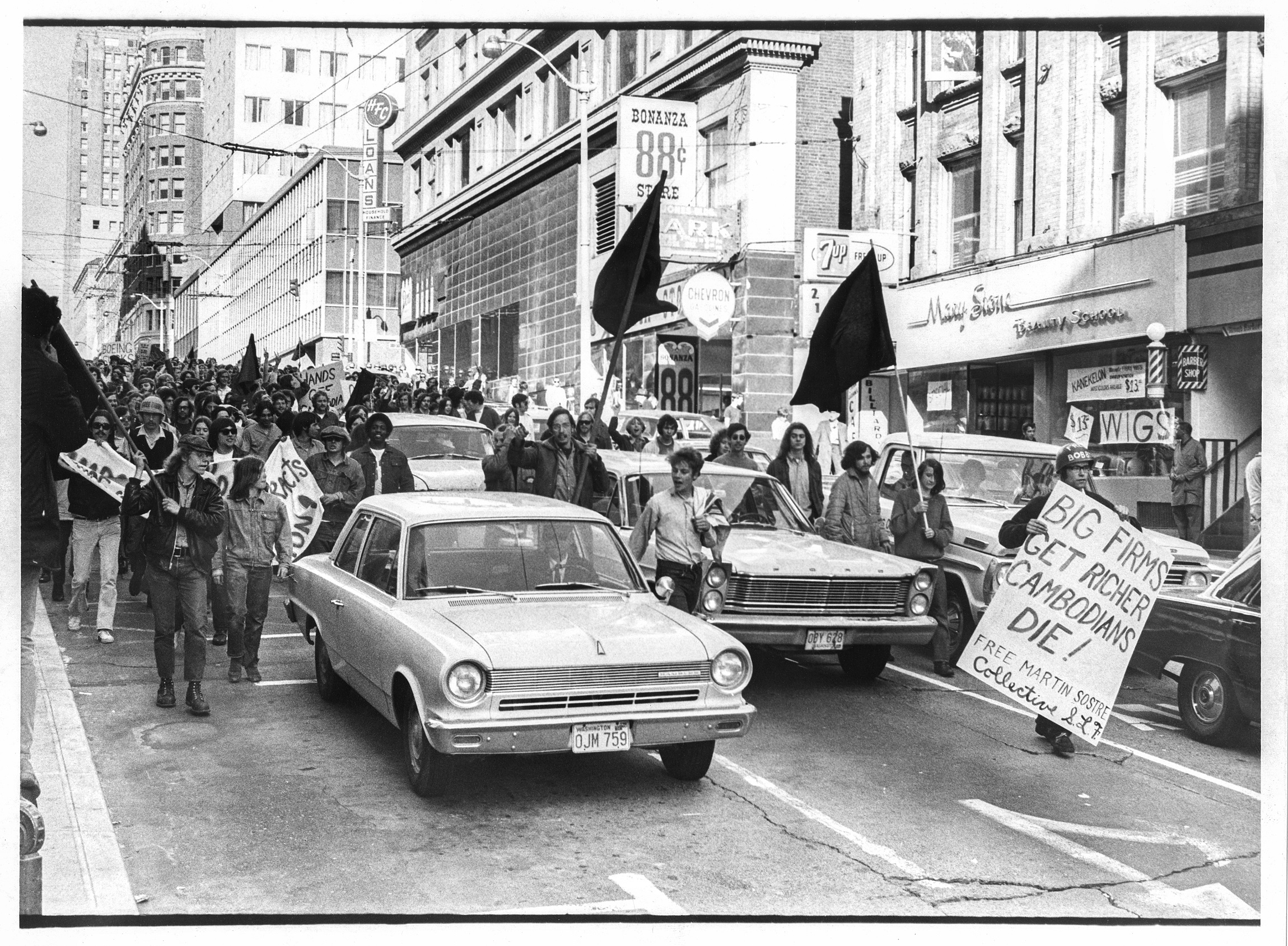 An antiwar protest in downtown Seattle on May 1, 1970, after President Richard Nixon announced that U.S. forces were expanding the Vietnam War into Cambodia. (MOHAI, Seattle Post-Intelligencer Photograph Collection, 2000.107.153.21.01)

We live in very divided and polarized times. I’ve been asked by young people if this is the worst it’s ever been: pandemic, racism, mass shootings, political division. The challenges our world faces right now are unique, but they are familiar. I know that when I came of political age in the 1960s and early ’70s, America seemed to be cracking up.

The war in Vietnam, political tumult in the streets, students being shot on their college campuses, assassinations, resurging racism, political alignments fracturing. The United States seemed at war with itself. My mother use to yearn for the “unity” she felt during World War II, a unity that excluded many citizens but bound many with a sense of a common purpose. “We live in historic times,” she would tell me. She meant: “Pay attention.”

I was, after all, interested in national politics at a young age. In 1966, I was a paperboy, a Boy Scout, and I attended Mount Baker Presbyterian Church. I was also a white, middle-class teenager, privileges I took for granted. I lived in Rainier Valley, which was then largely white and working class but was slowly shifting to a more diverse and integrated community.

Then 1968 changed everything. I was 15 and opposed the war in Vietnam. I went to my first anti-war demonstrations. In a few years the military draft would come for me. The assassinations of Dr. Martin Luther King Jr. and then presidential candidate Bobby Kennedy rocked the country. We had to watch as those who offered hope were gunned down. 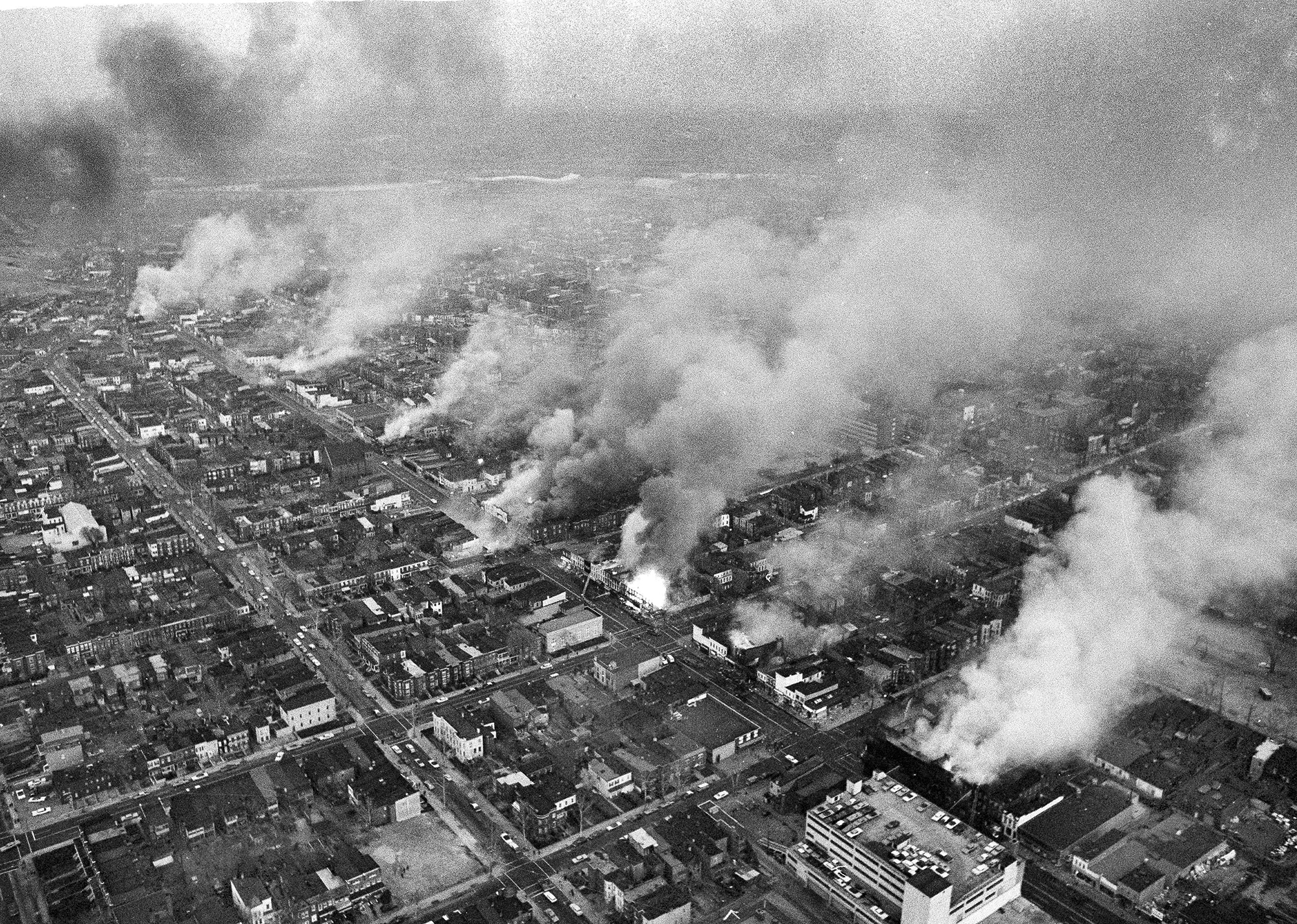 Buildings burn along H Street in the northeast section of Washington, D.C., April 5, 1968, during a day of demonstrations and rioting in reaction to the assassination of Dr. Martin Luther King Jr. (Charles Gorry/AP)

Buildings burn along H Street in the northeast section of Washington, D.C., April 5, 1968, during a day of demonstrations and rioting in reaction to the assassination of Dr. Martin Luther King Jr. (Charles Gorry/AP)

Richard Nixon was elected president over Hubert Humphrey. I attended a Humphrey speech at the Seattle Center Coliseum and watched as he was heckled and shouted down by anti-war activists. As a peace marcher myself, I was ashamed at the spectacle. Beating Nixon to me was paramount. Such divisions helped ensure Humphrey’s defeat that November.

I saw Nixon as someone who would make the war worse and who had a history as a devious, crooked politician. I felt like our country was going over a cliff.

I literally came of age by 1972. I had turned 18 and was going to vote in the presidential election. It was the first time for Americans my age, as the voting age had been lowered from 21. Instead of attending peace marches, I attended my local Democratic caucus and was surprised to be selected as a delegate to go to the legislative district gathering as a supporter of the peace candidate, Sen. George McGovern.

Everyone at that district gathering was older. You could feel intense energy in that room. I was a bit overwhelmed and confused by the process. Then a large, bespectacled Black man turned in his folding chair and asked if I would be willing to be a delegate to the Democratic King County convention on a slate opposed to the candidacy of Washington Sen. Henry "Scoop" Jackson. He told me we needed young people in politics.

The big-tent Democratic party was much divided, like the country. In 1968, the Southern Democrats split off to support George Wallace, the segregationist governor of Alabama. He ran again in ’72, but during the campaign he took a bullet in the spine from a would-be assassin who shot him to become famous. The big-tent ballot also included former Vice President Hubert Humphrey, who lost to Nixon in ’68; Maine Sen. Edmund Muskie; Rep. Shirley Chisholm, a Black U.S. congresswoman from New York; Rep. Patsy Mink of Hawaii, a Japanese American who was the first woman of color elected to Congress; Scoop Jackson; and others. Jackson ran as a Vietnam hawk and “favorite son” who wanted to control Washington’s delegates to the national Democratic nominating convention and had presidential ambitions down the line. Those of us supporting anti-war candidates lined up together to stop that from happening.

The man who touched my shoulder and raised his hand to nominate me was Clayton Pitre, a Seattle civil rights and housing activist, and a U.S. Marine veteran of World War II who would go on to receive Congressional Gold Medal from President Barack Obama for his sservice in a segregated unit in the South Pacific. I knew none of that then. But, as we delegates moved through the process and as the election neared, he would be in touch to see that I stayed engaged. He arranged to have me work at the polls. I learned much more about him after he died in late 2020. He never knew how much I appreciated him as a self-appointed mentor at an intense, brief political moment. His tug to get me involved gave me hope even if I didn’t quite understand what he saw in me.

In May of ’72, my sister and I went to Portland to help canvass Democratic districts for McGovern. I was assigned to a blue-collar suburban neighborhood where we knocked on many doors asking folks if they knew who they were going to vote for in the Oregon primary later that month and pitching McGovern to the undecided. As we walked our routes, construction workers hooted from rooftops at us long-haired “hippies.” In the evenings, we worked the phone banks. 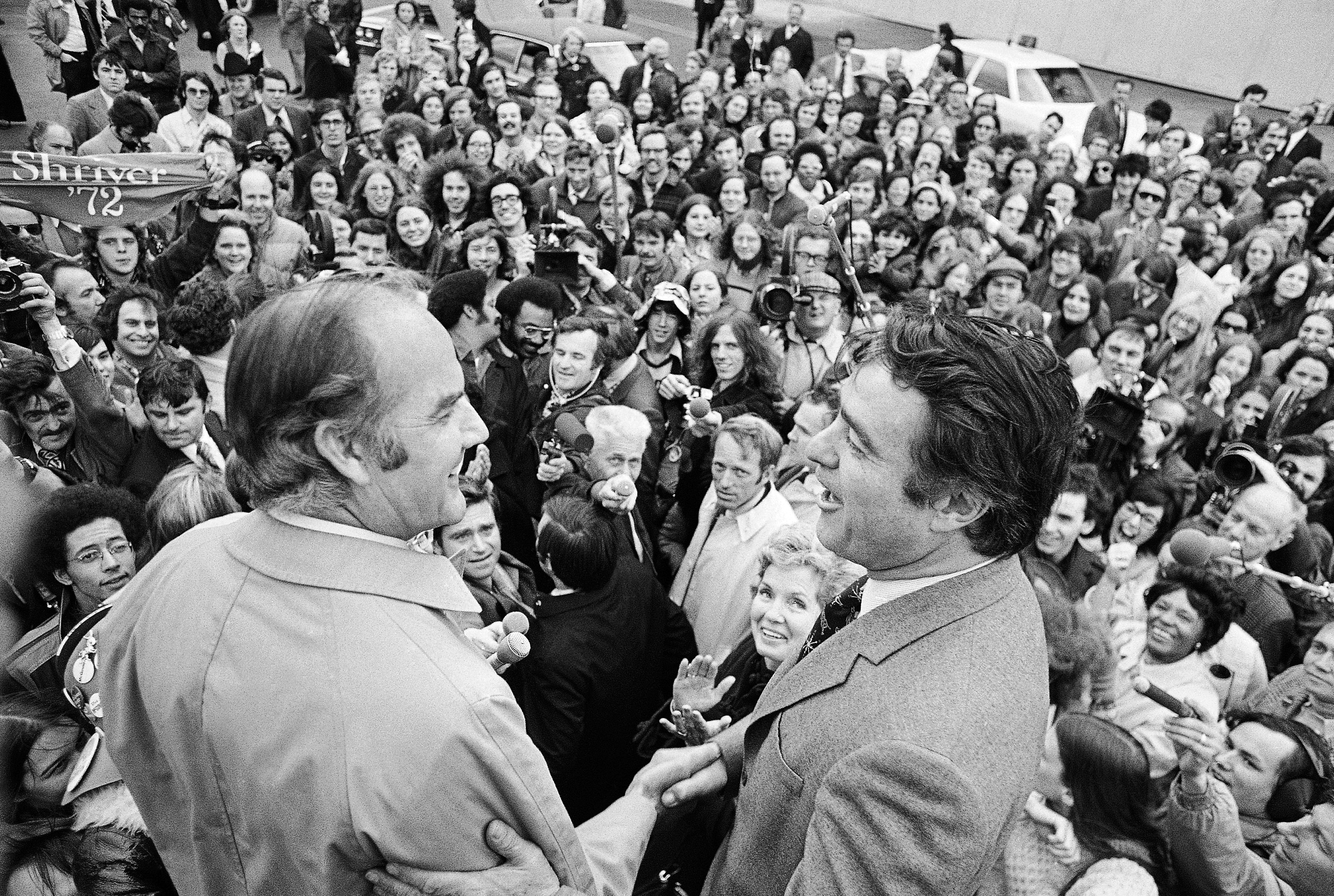 Sen. George S. McGovern, left, is met by his running mate, R. Sargent Shriver, and a crowd of well-wishers at Washington, D.C.'s National Airport in Arlington, Virginia on Nov. 8, 1972, the day after losing the presidential election. (AP file)

Sen. George S. McGovern, left, is met by his running mate, R. Sargent Shriver, and a crowd of well-wishers at Washington, D.C.'s National Airport in Arlington, Virginia on Nov. 8, 1972, the day after losing the presidential election. (AP file)

It was an education. I visited a retired trucker who lived in a trailer, who told me, “I’d vote for Teddy Kennedy if he were running, but since he ain’t, I’m voting for George C. Wallace.” I could not imagine how he got from one to another. I stopped at another household down the street and was invited in. The family gathered in the living room, three daughters and a wife around their patriarch, settled like Archie Bunker in his easy chair. When I asked who they were supporting for president, the mother said, “Four votes for Shirley Chisholm and one for George Wallace.” Talk about divided households.

Neither of my parents was an ideologue. They believed in science, evolution and America. They supported open housing and abortion rights. They believed in God and urged their children to try to leave the world a little better than they found it. Both belonged to a now extinct species of “liberal Republicans,” though my mother switched her allegiances when Nixon topped the ticket. While we had plenty of political arguments over the dinner table, we watched the nightly news together, read newspapers, talked about current events and history, and tried to understand and forgive our differences.

McGovern won the Oregon primary, but lost the Washington delegation because of Scoop Jackson’s well-oiled machine, which steamrolled over our anti-Jackson delegate slate. I was bitter about it for a time, but McGovern did go on to win the nomination. He was crushed in the general election. Humphrey won Washington in ’68, but Nixon did in ’72. McGovern won only Pacific and Grays Harbor counties in the state. At a Democratic downtown fundraiser I attended that fall, Jackson refused to even say McGovern's name.

I learned the way I could best engage in politics was to write about it. In late 1972 I helped start the newspaper at my school, The Evergreen State College, and ran the editorial section, wrote columns, later became editor. I had a nightly national news segment on our radio station, KAOS-FM, during the height of Watergate. The ’60s era seemed to come to a climax with Nixon’s resignation in August of 1974. Washington promised to clean itself up, Roe had become law and the war nearly ended. Journalism, it seemed, had made a real impact.

Benjamin Franklin said the Constitution’s authors had created a “Republic, if you can keep it.” So much work must go into simply having a semblance of democracy, let alone “keeping” it while also trying to make progress toward a more perfect union and a more just society. Some challenges are new, others seem everlasting. If the arc of moral justice bends toward justice, as Dr. King said, it requires generations of people pulling it in that direction.

I learned that every tug makes a difference. 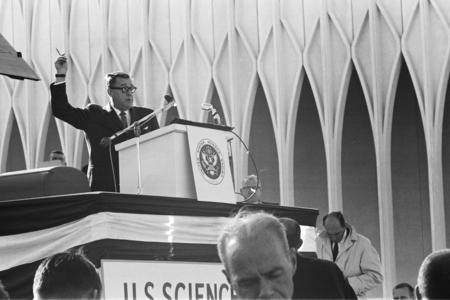 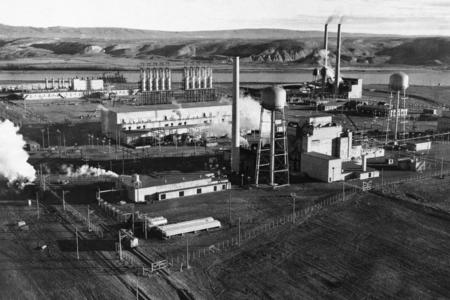 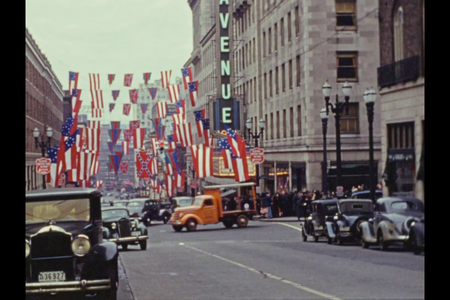