Should the San Juan Islands be on the British or American side of the border? In 1859, the two countries nearly battled over it.

The San Juan Islands in Washington are a wooded paradise in the Salish Sea, popular with tourists, boaters, summer folk, and orca pods. But the peaceful beauty of these islands was once broken when two nations loudly rattled their sabers.

Over what you ask? An argument over a dead pig.

In the late 18th and early 19th century, European empires competed to claim and colonize the Pacific Northwest, among them the Spanish, Russians, British and Americans. They explored, mapped, and claimed the land and waters, and they exploited the region’s Indigenous people and the bounty of furs for trade.

And occasionally they clashed.

In 1859, the border between the U.S. and what is now Canada had been mostly determined by treaty, but vague language made it unclear on paper where the border lay between Vancouver Island, then a British colony, and the San Juan Islands. American settlers believed the islands belong to them, and squatters began to settle on San Juan Island. The Hudson’s Bay Company had a working sheep farm there and claimed it for Britain.

In June of 1859 things came to a boil when an American settler on San Juan shot a British-owned pig that was raiding his garden. An argument ensued, each claiming to be the violated party. When they couldn’t agree on a price for the dead hog, well, the dispute escalated.

The governor of Vancouver Island, Sir James Douglas, threatened to have all the Americans removed from San Juan. The settlers pleaded for help from the U.S. Army.

Ah, be careful what you wish for! 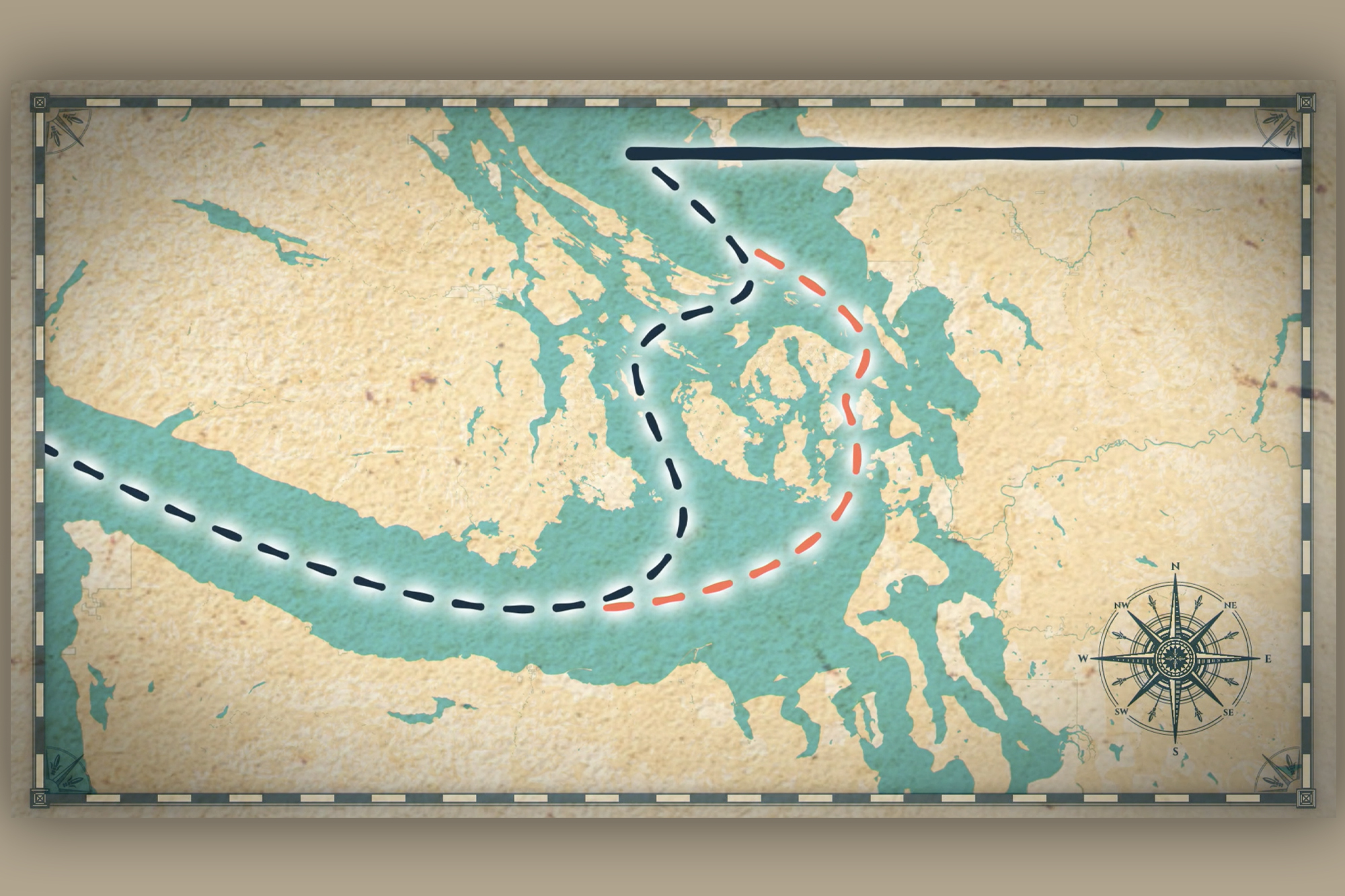 The disputed border at the San Juan Islands.  The red line is the British claim. (Madeleine Pisaneschi)

The disputed border at the San Juan Islands.  The red line is the British claim. (Madeleine Pisaneschi)

The Americans landed men and artillery under the command of the hot-headed Capt. George Pickett, later known infamously as the leader of the futile Pickett’s Charge at Gettysburg. The aggressive military occupation on behalf of squatters’ rights enraged Gov. Douglas and ships from the Royal Navy began to appear bristling with guns.

Discussions between the near-warring camps ensued but went nowhere. It was escalating into a real, possible shooting war over a deceased farm animal (a Berkshire boar, if you’re interested). Never had such high stakes hinged on such low stakes. In a way it was the 19th century equivalent of the Cuban Missile Crisis, but without the potential for global apocalypse.

But the timing was dicey. The U.S. was already steaming toward a higher stakes internal fight, the Civil War.

After weeks of confrontation, posturing and maneuvering, cooler heads prevailed. Was all-out war over a slab of ham really worth it? Both governments thought not. When president James Buchanan learned about the crisis, he sent Gen. Winfield Scott, hero of the Mexican War, by ship to negotiate with the British. On their end, the Royal Navy received notice that war was to be avoided at all costs, despite American escalation.

Some shots were fired, probably in salutes or gunnery practice. In 2002, some boys found a 32-pound cannon ball that likely came from the 30-gun British steam frigate HMS Tribune, a veteran of the Crimean War

Fortunately, the cannon ball is rare. An agreement was negotiated: both sides would militarily jointly occupy San Juan Island until the dispute over the border and whose country it was in was settled by arbitration.

About one hundred American soldiers settled on a hill on the southern end of the island in what is called American Camp. Here they had great views of the surrounding territory from their redoubt.

A like number of Royal Marines made their home at a place called English Camp at the opposite end of the island where they planted gardens, orchards, and built a nice Victorian home for their commander. It feels like a little bit of England.

There the two “warring” sides sat for the next dozen years or so. They got along quite well, celebrating holidays like the 4th of July and Queen Victoria’s birthday together. They built roads and tried to control a population of settlers, smugglers and whiskey sellers. 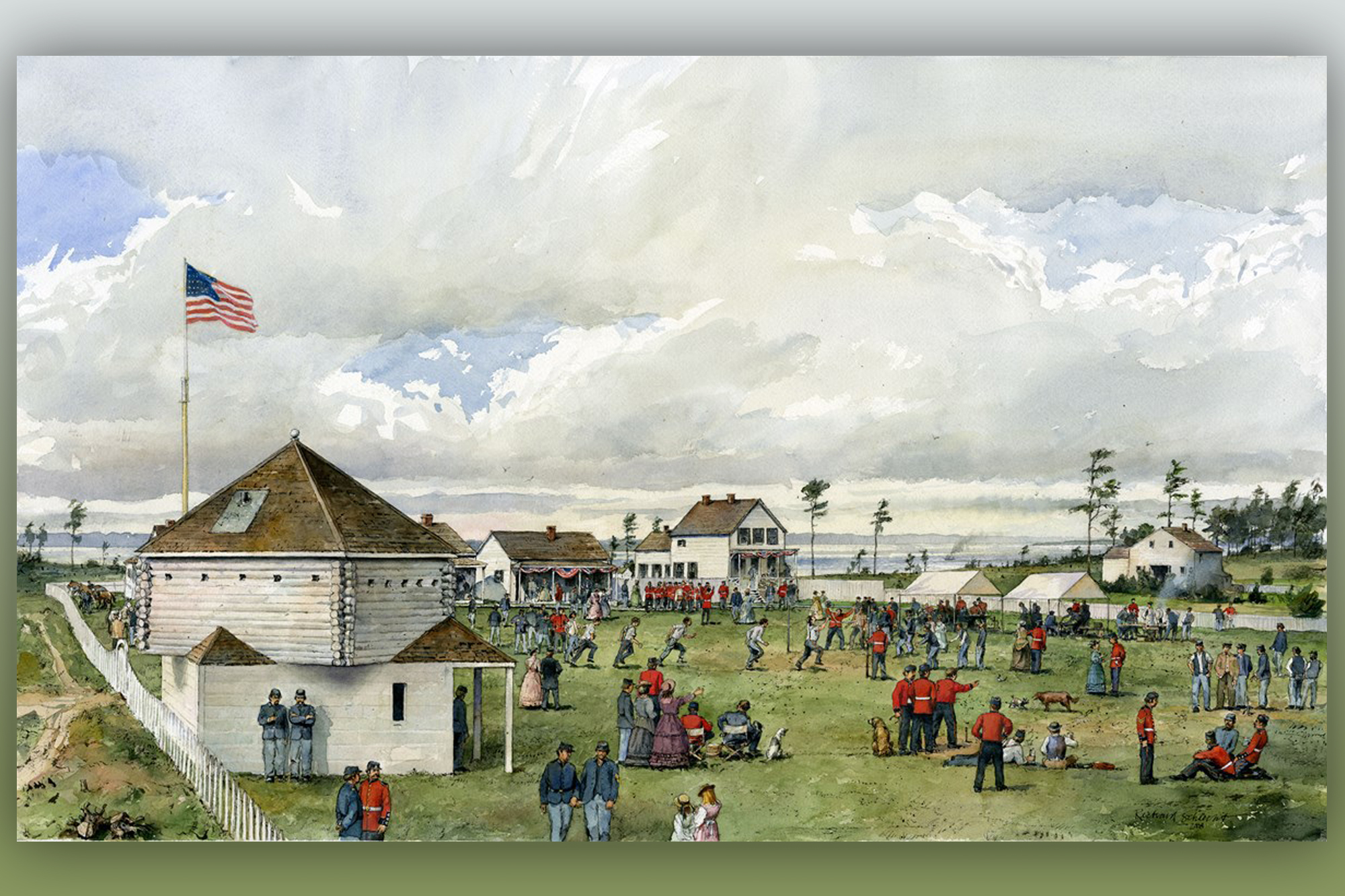 That cooperation did not eliminate territorial ambitions on either side. Gov. Douglas mused that with a Civil War in the U.S. the British could dip below the 49th parallel border and retake their former holdings down to the Columbia River. After the war, Secretary of State William Seward, who purchased Alaska from the Russians, suggested that the British ought give British Columbia to the U.S. for war reparations for having built Confederate ships, one of which decimated U.S. whalers in the Pacific. The idea was rejected.

And here’s another layer of conspiracy theory. Granville Haller, an officer with Pickett during the Pig War confrontation, later claimed that Pickett wanted a war with England to distract the nation and make it easier for the South to secede from Union. Was the Pig War incited by a Southern sympathizer? Haller, a former Union officer, thought so, but there’s no real evidence.

The entire ruckus was settled in 1872 when the final arbitrator, Kaiser Wilhelm I of Germany, decided the American border claim was the right one.

Despite an American “win” the spirit of mutual respect lives on. The National Park Service is in charge of two historic Pig War sites located at either end of the island. Every day, the American and British flags are still raised over the respective old military camps where the war they were sent to fight was so wisely avoided.