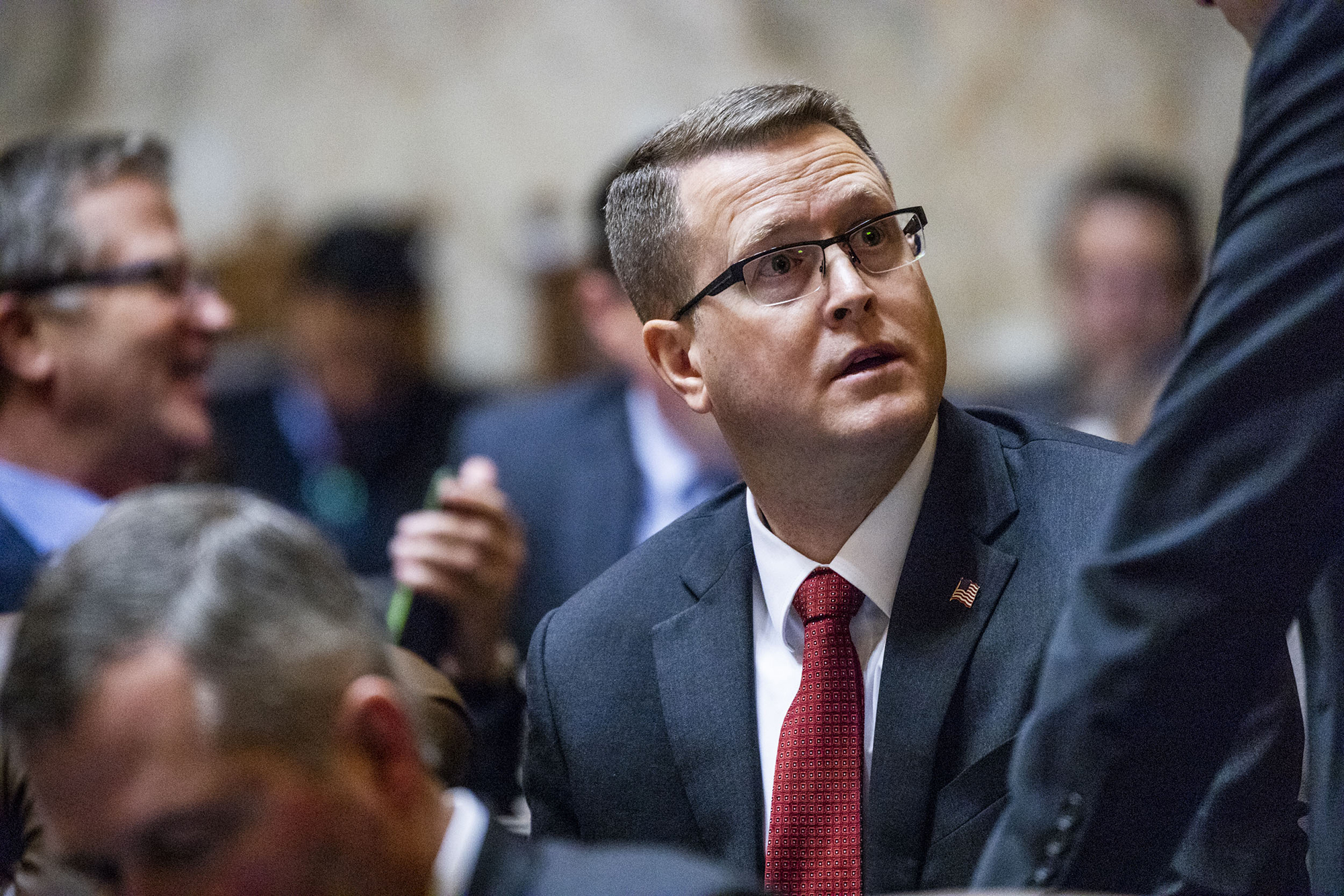 Representative Matt Shea is shown during Washington Gov. Jay Inslee's State of the State address in Olympia, Wash. on Tuesday, Jan. 15, 2019. An independent investigation found that Shea has taken part in acts of political intimidation and domestic terrorism. (Photo by Dorothy Edwards/Crosscut)

An independent investigation has concluded that Washington state Rep. Matt Shea “participated in an act of domestic terrorism against the United States” by helping plan the armed takeover of the Malheur National Wildlife Refuge in Oregon three years ago.

The investigation found that Shea similarly played a key role in two other armed conflicts against the U.S. government — not only by showing up and participating in the standoffs, but by helping plan them, which involved recruiting armed militia members to oppose federal law enforcement agents.

On Thursday, House Minority Leader J.T. Wilcox confirmed that Shea had been suspended from the House Republican caucus, a serious form of discipline. That means Shea’s access to legislative staff will be limited, and he will be barred from House Republicans’ internal meetings to discuss pending legislation.

Shea was also removed from his position as ranking Republican on the House Environment and Energy Committee, and will be taken off two other committees on which he serves.

Among them: that the Spokane Valley lawmaker took part in a group chat in 2017 where he “condoned violence and intimidation” of his political opponents, and offered to conduct background checks on them.

That allegation, first reported by The Guardian in April, was largely what spurred House leaders to commission the outside investigation into Shea’s conduct.

But the incident wasn’t an isolated one, according to the four-month investigation, which was led by a former FBI agent and former law enforcement officer.

The investigation says Shea, a leader of the anti-government Patriot movement, routinely encouraged his supporters to intimidate “activists, government officials, Muslims, and others who speak or act in opposition to his personal beliefs and political agenda.” Those activities occurred over a five-year period from 2014 to 2019, the report says.

The outside investigation similarly confirmed other media reports about Shea, including that he “engaged in and supported the training of youth and young adults to fight a holy war” (also reported by The Guardian), and that he wrote a document called “Biblical Basis for War" (first reported by The Spokesman-Review).

According to the investigators’ report, Shea’s “Biblical Basis for War” document called for replacing the U.S. government with a theocracy, as well as the “killing of all males who don’t agree.”

Shea, who didn’t respond to the investigators’ requests for an interview, has previously said the biblical warfare document was merely a summary of Old Testament sermons.

On Thursday evening, Shea resisted calls to resign, which had come from Republicans and Democrats alike. In a Facebook post, Shea called the investigation a "sham" and wrote, "I will not back down."

In a statement released by his attorney, Mark Lamb, Shea said he was not allowed to review and respond to the report before it was released — a denial of due process, in Shea’s opinion.

"When due process is thrown out the window for political expediency we all, as Americans, are in danger," he wrote.

Other revelations contained in the newly released investigation have been less widely reported.

Shea was already known to have traveled to the Malheur standoff in 2016, as well as to Nevada two years earlier to support Cliven Bundy, a rancher who let his cattle graze illegally on federal land.

But the investigation says Shea also took part in a third armed standoff against federal officials, this one in Priest River, Idaho, in 2015.

That confrontation involved blocking federal officials from seizing firearms from an elderly veteran who was no longer legally eligible to possess guns, according to the investigators’ report.

After the veteran suffered a stroke, a health care professional added the man to a federal database of people ineligible to purchase firearms. The U.S. Department of Veterans Affairs had planned to remove the veteran’s guns, the report says, “pursuant to VA regulations for individuals receiving VA benefits.”

Shea called on members of the Patriot movement to assemble at the man’s house to stop the firearms seizure.

It worked, the investigators wrote: “Reports indicated that approximately 100 individuals showed up, many armed, and stood with Representative Shea at the veteran’s home to prevent the VA employee from entering.”

No one was hurt in the incident. But the investigators found evidence that Shea was heavily involved in planning the standoff, and was prepared for a prolonged encounter that could lead to violence.

Shea also had a greater role in planning the 2016 Malheur standoff than previously known, according to the investigation. The armed takeover of the Oregon wildlife refuge lasted 41 days, and led to law enforcement agents shooting and killing one person, a rancher named LaVoy Finicum.

According to investigators, Shea “authored and circulated an operations plan” for militia members to use during the Malheur standoff.

“The action was portrayed as a spontaneous act, but this investigation has obtained information that the armed takeover was meticulously planned in December 2015 by conspirators that included Representative Shea,” the report says.

Shea also met with law enforcement officers without sharing his involvement in planning the standoff, according to the report. Shea used that meeting to “gather intelligence regarding law enforcement strategies,” the report says, then met with leaders of the takeover, going against the wishes of local law enforcement.

One of those leaders was Ammon Bundy, the son of the Nevada rancher who was at the center of the 2014 conflict over grazing rights. According to the report, Shea took part in four meetings with Ammon Bundy to help plan the Malheur standoff.

Shea’s alleged involvement in planning the 2016 Malheur takeover contrasts with his statements to a House ethics investigator at the time. Back then, Shea had said he traveled to the armed conflicts in Nevada in 2014 and Oregon in 2016 on “fact-finding” missions and to help “ensure a peaceful resolution.”

“However, this investigation has determined Representative Shea went to Nevada and Malheur specifically to support armed insurrections at both locations in furtherance of his Patriot Movement agenda,” the report says.

The Patriot movement, which is active primarily in Western states, rejects the idea that the federal government can control and own land.

In the 2014 standoff in Nevada, that sentiment led armed militia members to try to block federal officials from seizing Cliven Bundy’s cattle, which Bundy had continued to let graze on federal land, in defiance of court orders.

Other findings in the newly released investigation included that Shea personally intimidated his opponent in the 2012 election.

According to the report, Shea stood in his political rival’s driveway and took a photo, then posted the image on social media and would not remove it when asked.

Shea also “engages in and promotes annual Patriot Movement militia training” to prepare for future armed conflicts against law enforcement and the government, the investigation found.

House Republicans' decision to remove Shea from their caucus is a significant step, although he remains in the Legislature as an elected member. The GOP lawmaker, who represents Washington's 4th Legislative District, previously served as the House GOP caucus chair, after first being elected to the Legislature in 2008.

It is also possible that Shea could be removed from the state House entirely.

Expelling Shea would require a two-thirds majority vote of House members, and has happened only once in the history of Washington’s Legislature.

In that case, which took place more than 85 years ago, a House member had been tried and convicted of statutory rape. Then-Rep. Nelson Robinson was pardoned by the governor, but House members voted to expel him from the chamber anyway.

For his part, Shea has not been convicted of any crime associated with the investigators’ report.

Legislative leaders said the House clerk had forwarded the report to the U.S. Attorney's office and the FBI.

State Rep. Laurie Jinkins, a Tacoma Democrat who was recently selected to be the next speaker of the House, said in a written statement that it is important for House members to have time to review the full report before deciding what steps to take.

Still, Jinkins said, throughout the institution's 130-year-history, she was "unaware of House members ever having received such a comprehensive and disturbing investigatory report about another member."

This story has been updated to reflect disciplinary action taken by the House Republican caucus, and to add reaction from Shea and House leaders.