Coronavirus is far from over, but countless businesses are already gone

Unemployment claims have skyrocketed in Washington as the COVID-19 fallout continues. 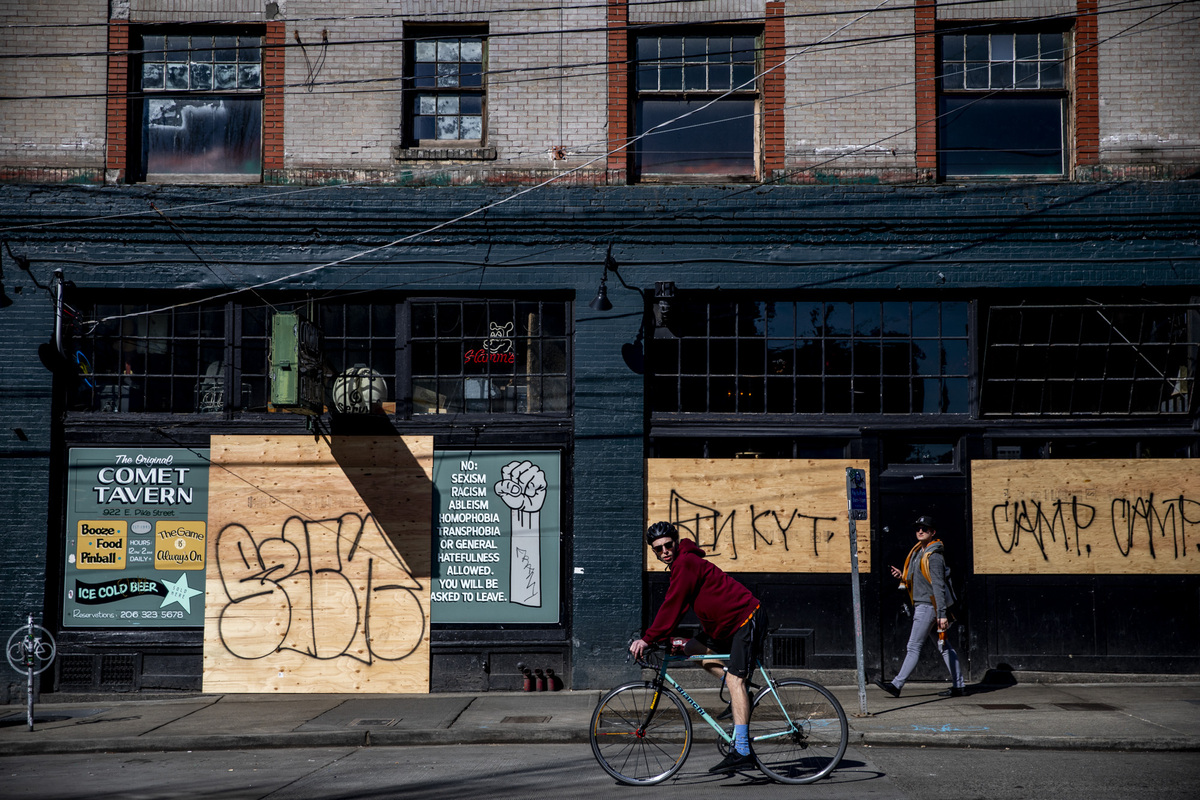 Several businesses in the Pike/Pine area of Capitol Hill, including the Comet Tavern, have boarded up their windows and doors in response to COVID-19. (Dorothy Edwards/Crosscut)

Even with the coronavirus pausing public life, Red Mill Burgers could have kept the grill going for another week.

Revenue was down to what the Seattle burger chain usually saw on “a rainy weekend in the fall,” Red Mill General Manager Grace Jurado said last week. The ban on in-restaurant dining, announced along with broad restrictions meant to slow the virus and keep the medical system from being overwhelmed, wouldn’t have stopped Red Mill from filling to-go orders.

But staying open would have meant employees working shoulder to shoulder in kitchens and customers stacking up in lines at the register, both social distancing no-nos. So rather than serving customers, Red Mill workers packed up meat and vegetables to take home.

“I knew that the right thing to do was to do what we can do to stop the spread,” Jurado said. “But it was really hard, because of my employees.”

Some, though not all, of the chain’s 50 employees will be able to draw unemployment, and Red Mill will keep paying for health insurance for employees insured through their work for as long as it can, Jurado said. But, “with no money coming in, I can’t really see us being able to keep that up more than a few weeks.”

As Western Washington waits for a surge in new infections, an economic shock has idled businesses like Red Mill and left thousands of workers unemployed.

More on coronavirus: What Washington’s new 'stay-at-home' order means for you

For hospitality businesses, voluntary self-isolation was the first hit, as restaurants and bars saw revenues fall to near zero. Then came Gov. Jay Inslee’s announcement banning dining in, closing bars and stopping gatherings of 50 or more. And on Monday, the governor announced everyone should do their best to stay home, but still left the possibility of picking up food or calling for delivery.

“Last week, we saw a 150% increase in claims, and we are seeing an even more dramatic increase this week,” said ESD Commissionere Suzi LeVine.

Nationally, new unemployment claims jumped dramatically to 281,000 for the week ending March 14. The increase of 70,000 claims from the previous week is the worst rise in initial claims since the 2008 economic downturn. A poll conducted for PBS NewsHour by Marist showed 18% of American workers have been laid off or seen their hours reduced because of coronavirus.

The state unemployment office has relaxed some of the rules to help workers and businesses impacted by coronavirus, such as making it easier to apply for benefits if you’ve been laid off because of a temporary closure of your workplace.

That may bring some comfort to hourly wage earners in the hospitality sector — which employs one-tenth of Washington’s 3.5 million-person workforce, and has been hardest hit so far.

Hotel occupancy rates are approaching single digits, said Stefan Moritz, secretary-treasurer of Unite Here! Local 8, which represents 5,000 hospitality workers in the region. Dozens of restaurants have closed, Moritz said, and workers still on the job struggle to get more than a single shift a week.

Beyond losing their income, workers who don’t log enough hours also face the loss of their health insurance, Moritz said.

“It’s rough and scary,” Moritz said. “The impact of this has been almost immediate and really severe. … It’s stressful, you know, to not know what the next week or the next month will bring.”

While some employers are paying idled workers, Moritz said, most are losing paychecks they need to pay rent and put food on the table.

Most Washington workers who lose their jobs temporarily or permanently may qualify for unemployment benefits, ESD spokesman Nick Demerice said, though every circumstance is different. Gig workers and those who recently began working generally cannot draw unemployment checks, which pay a fraction of a worker’s weekly wage, up to $790 a week.

Moritz lauded protections like the moratoriums on evictions announced in Seattle, Burien and elsewhere. But, he said, without rapid government action, service workers’ lives will be upended.

“It’s completely unprecedented, and it’s going to require us to support each other and dig really deep,” he said.

Jason Lajeunesse, owner of Comet Tavern and Lost Lake and co-owner of a number of other Seattle hospitality businesses, called the impact of coronavirus incredible both on business owners and their employees. He said his personal group of businesses had laid off about 220 people, with the exception of a few managers working deliveries.

“It’s just about everyone at this point,” Lajeunesse said.

While the hospitality sector’s distress is obvious, the damage doesn’t end with customer-facing businesses, Landers said.

“Professional services that work with small businesses — lawyers, accountants, suppliers, architects — have had their phones fall silent,” he said. “Anyone whose work is related to events — like caterers and florists — has seen every single reservation be canceled.”

Many of those still able to work have been doing so remotely. F5 Networks became Seattle’s first major employer to close, clearing its 1,500-person downtown headquarters March 2 for a one-day cleaning and then moving to remote work four days later.

“We took cues from other companies who had faced similar dilemmas within the past several weeks, as well as the guidance of government authorities,” said Mika Yamamoto, an executive with the network infrastructure and security company. “Though we have disaster recovery and mitigation plans, there just isn’t a precedent for what we are all facing right now.

“It is all happening so fast, it is ever changing and incredibly intense. The stakes are high.”

If grants and other supports don’t arrive immediately, Landers said, the damage could be lasting.

“What will Seattle look like,” he asked, “if we lose the businesses and organizations that make up its heart and soul?”

Red Mill’s Jurado suggested a 30- or 60-day moratorium on rent and mortgage payments for businesses. Property is the largest cost for most small businesses, and a break in those bills while businesses sit empty would help make sure they can reopen when the time comes.