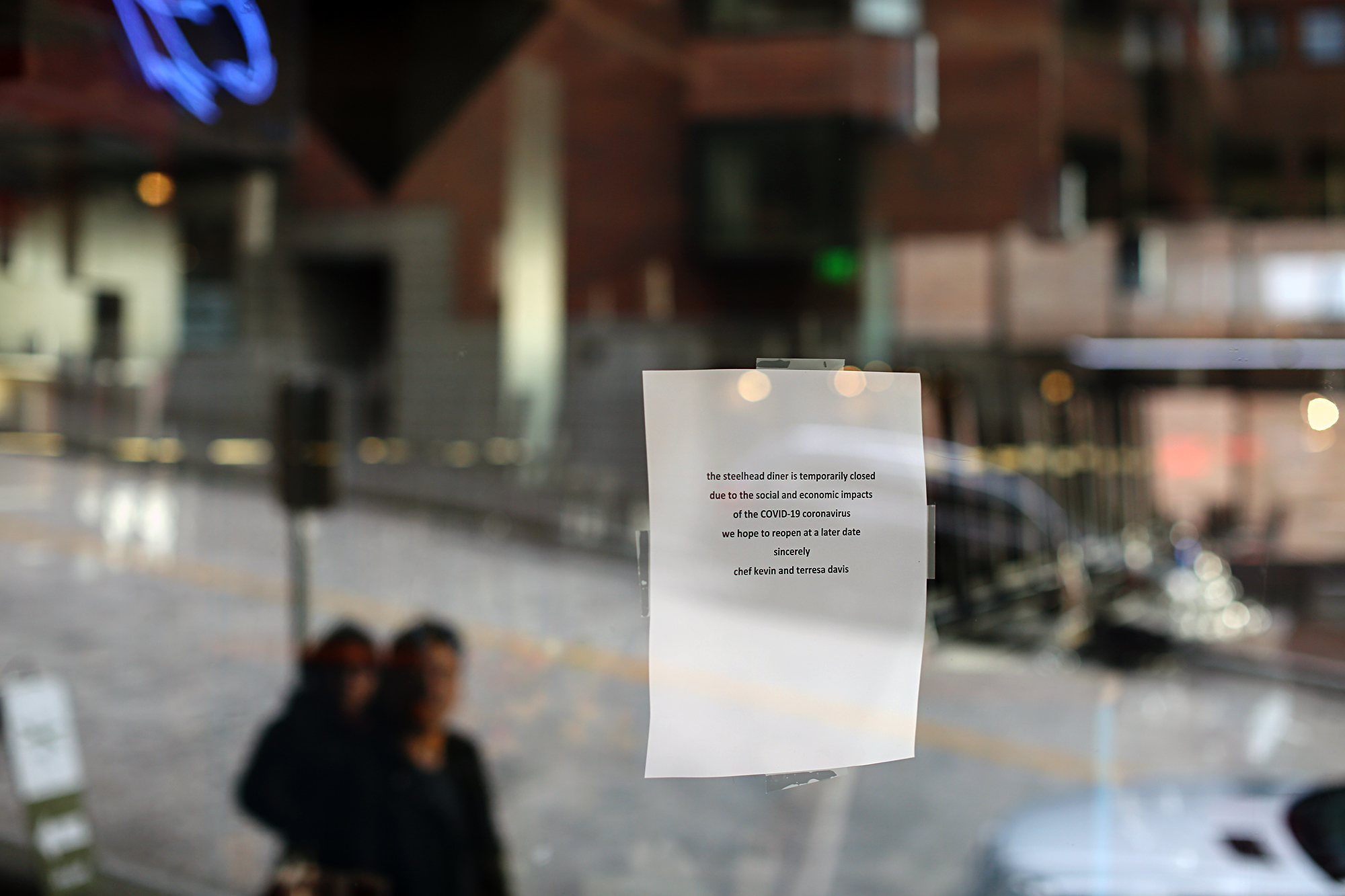 A sign on the window of Steelhead Diner announces the restaurant was closing. (Shaminder Dulai/Crosscut)

Jenny Ives was scheduled to work a double shift on Monday. What she got instead was a notice that she and all her colleagues at Blueacre Seafood in downtown Seattle were effectively laid off.

“As of tomorrow, March 8th, Blueacre Seafood will be temporarily closed due to the social and economic effects of COVID-19 coronavirus,” read the email to employees just before midnight Saturday.

It wasn’t just her restaurant. Steelhead Diner, Orfeo, Zane + Wylie's and Tempesta Coffee & Donuts — all under the same ownership group, Kevin Davis Restaurants — have been shuttered as well, putting nearly 200 employees out of work.

The closure is temporary, in theory. But the reopening is set for “when the downtown employees, tourists and conventioneers have returned,” a date that owners Kevin and Terresa Davis acknowledged in their email they could not guess.

If it does come, it’s not likely to be soon. The Davises recommended to employees that they seek unemployment benefits through the state.

“Right now it’s kind of scary because I don’t know 100% I’m going to be able to make rent,” said Ives, a server at Blueacre since September. She renewed her lease for another year two weeks ago, which means she’s locked in to her North Seattle home. The price of living in the city has her nervous. “It’s hard. It’s a very expensive city,” she said.

As coronavirus takes hold in King County, public health officials are urging residents to practice “social distancing” by avoiding large groups, telecommuting when possible and canceling nonessential large events. What has followed is a large-scale quieting of this booming city, with its growing population of tourists and tech workers and busy restaurant scene.

The widespread effort to control the spread of the virus,  which seems to move easily from person to person, is already reverberating into people’s pocketbooks and is likely to continue to do so.

On Tuesday, Local 360 Cafe and Bar in Belltown said it was closing its doors, blaming the coronavirus. Seattle City Councilmember Andrew Lewis said Monday that he’s heard from businesses in his downtown district that traffic has plummeted, and closures — both temporary and permanent — are likely to follow. 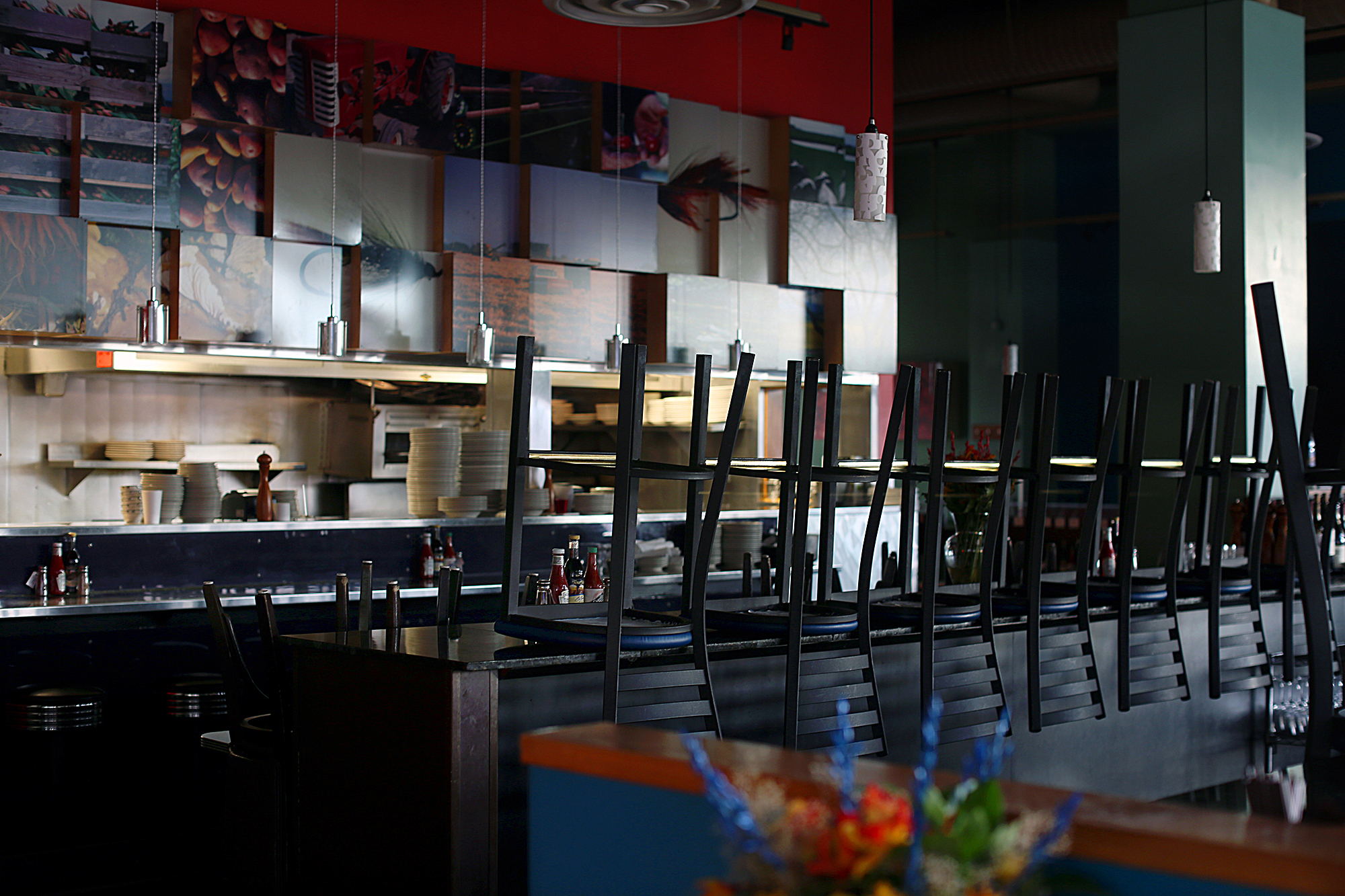 Egan Orion, director of the Broadway Business Improvement Area and a former Seattle City Council candidate, told Crosscut that the warnings he’s hearing from businesses — restaurants in particular — are “apocalyptic.”

"If this lasts longer than a month or two, you’re going to see a lot of businesses closing," he said.

For workers, the impact could be particularly painful. In a city as expensive as Seattle — at a time when an unexpected expense would push many people into debt — the prospect of losing even one paycheck can be frightening for lower-wage workers, who often lack cash assets, or liquidity.

“If the Seattle population is anything like the population at large, it’s a liquidity crunch which many people are ill-equipped to handle,” said Philip Bond, professor of finance and business economics at the University of Washington’s Foster School of business.

Officials at all levels of government are scrambling to find ways to mitigate the stress on both workers and businesses, searching for the extent of their authority.

“We’re building this plane as we fly,” Councilmember Teresa Mosqueda said in a remote meeting of the council Monday.

Durkan also announced there would be no utility shutoffs as the outbreak unfolds. This came a day after a group of labor organizations called on elected officials to halt evictions and utility shutoffs, preserve medical benefits and offer emergency assistance to workers.

“The next few months will be tough," Durkan said in a statement.

The state has also said it could offer tax relief and waive penalties for missed payments. On Tuesday, Gov. Jay Inslee said the state would expand unemployment access to people who may lose work resulting from COVID-19 in order to “widen the safety net.” The new benefits would help workers who might lose hours due to a temporary shutdown of business or because they’re quarantined.

Amazon, meanwhile, has said it would offer $5 million in assistance to businesses near its campus that are struggling as thousands of the company's employees work from home.

Employees in the service industry, however, may face an immediate crisis.

At Blueacre, server Alex Atkins said he and his colleagues had already seen their paychecks lighten in recent weeks and months. Winters are always slower. But spring is when the dampened business is supposed to rebound. The workers “were all really relying on the business to return,” said Atkins.

Instead, workers near Blueacre, at Seventh Avenue and Olive Way, have stayed home and nearby conventions have been scratched, making business at the restaurant slower than ever. The closure lands especially hard on workers whose bank accounts are already stretched from the slow winter season.

In a letter to city officials, Molly Moon Neitzel of Molly Moon's Ice Cream echoed this concern. “Many of us hold our breath in the last few months of winter in terms of cash flow,” she said. And now that exhale has been delayed.

Atkins said he’s going to try to make up some of what he’ll lose by driving for DoorDash, delivering food. But he said temporary work won’t come close to covering the difference. Atkins has worked for Blueacre for nearly a year and at the restaurant’s peak, he said he could make $2,000 a paycheck.

Atkins lives in Tacoma and, at $500 a month, his rent is relatively low. Still, he fears even that would be a stretch with DoorDash alone, so he plans to seek unemployment. “I suspect that this may be a permanent closure,” he speculated.

Kevin Davis did not return an email seeking comment.

For workers suffering from a drop in demand, the UW's Bond said the solution is both simple and complicated: “It’s basically getting checks to people who are affected,” he said. “Pausing to think about how to implement that, it becomes relatively challenging.”

And while lower-wage workers will be the first to feel the impact, the effects are likely to ripple outward, Bond said. “If I’m a dentist, I might have fewer people coming in,” he said.

The quickest existing path for workers is through unemployment compensation.

Ives, the Blueacre employee, is asking around for shifts at other restaurants and bars. But what had been a voracious restaurant industry just a month ago has ground to a halt. Restaurants may remain open, but they’re certainly not hiring.