To slow coronavirus, events of 250-plus people are banned. Why 250?

Washington chose a specific figure, but experts say "there is no magic number." 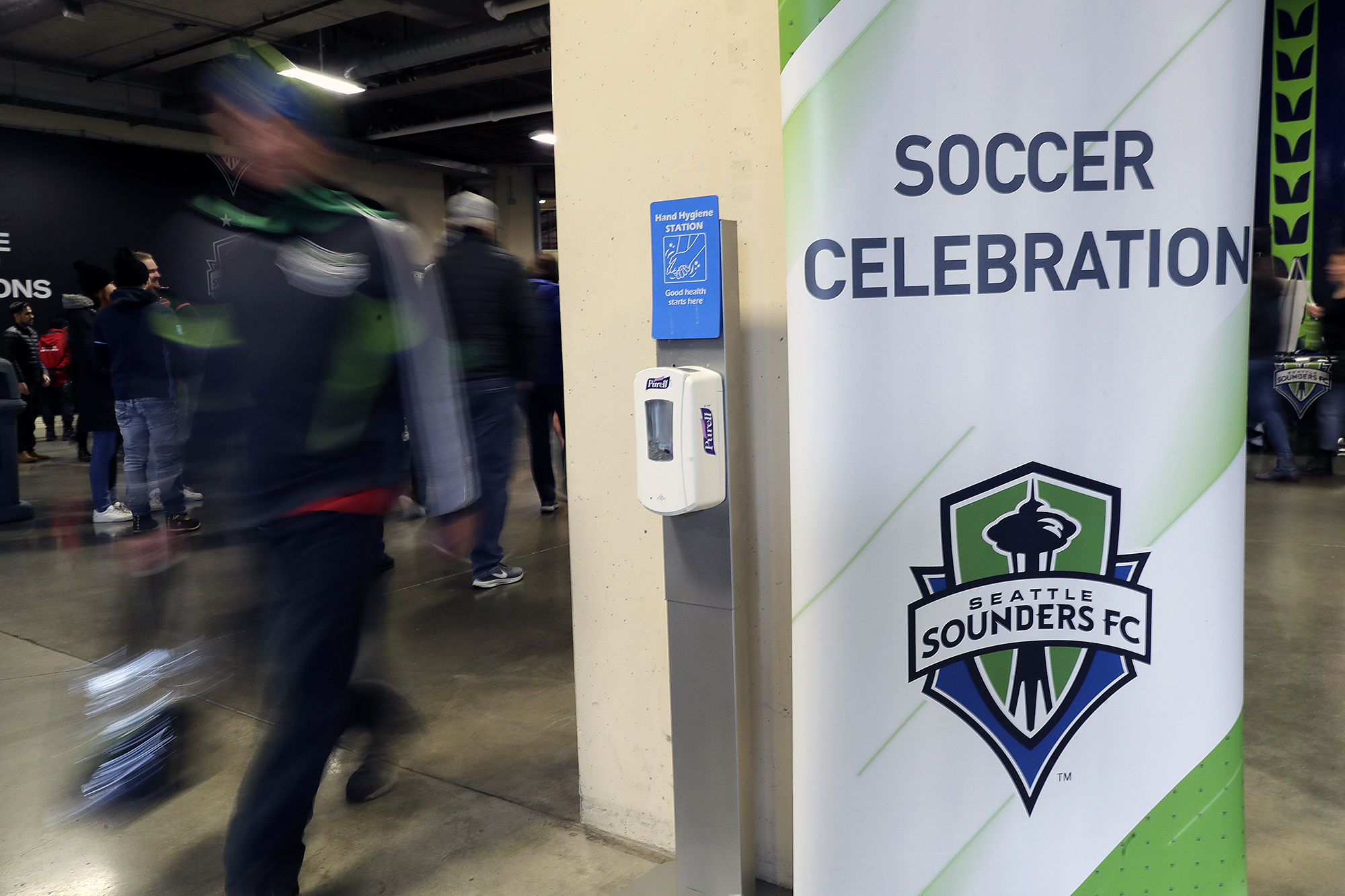 People walk past a hand-sanitizing station at CenturyLink Field prior to an MLS soccer match between the Seattle Sounders and the Chicago Fire, March 1, 2020. Following an order by Gov. Jay Inslee to ban all gathering over 250 people to help cull Covid-19, the Sounders postponed all home games. (Ted S. Warren/AP)

As coronavirus spreads around the world, public health officials and politicians attempting to prevent the rapid spread of infection are playing a numbers game: How many people gathering in one place is too much of a risk?

On Wednesday, Gov. Jay Inslee announced that the number in Washington is 250. Soon after, Public Health ⁠— Seattle & King County announced a countywide ban on smaller events unless they meet certain mitigation requirements, including screening employees and offering hand-sanitizing stations, with no specified end date. The next day, Inslee closed down 43 school districts for six weeks.

By Friday, Inslee announced his ban on gatherings with more than 250 people extended to the entire state.

But why 250, instead of 50, or five? It’s difficult to determine exactly why that is the specific number around which these government decisions are being made.

“The quick, nonexpert answer is this: The decision was made with input from public health experts and from the CDC [Centers for Disease Control and Prevention],” says Mike Faulk, deputy communications director and press secretary in Gov. Jay Inslee's office. 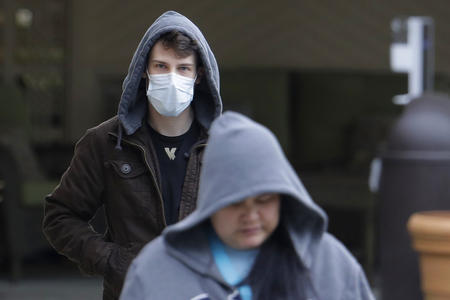 “This number was arrived at in consultation with CDC and other experts based on the best information we have currently,” confirms Hilary Karasz, a public information officer with Public Health.

In written guidance, King County says it expects the local case count to double every five to seven days. Inslee recently said he anticipates that without sufficient intervention Washington cases could reach 64,000 by May.

As for why King County’s guidance is potentially more stringent than the governor’s, Karasz says, “The governor has the authority to cancel, close or restrict. The local health officer’s authority [like that of Public Health officer Dr. Jeff Duchin] is broader. He can take actions like the governor’s to prohibit events, and also require additional measures, such as to put conditions on meetings, like this new order for prohibiting meetings of under 250 people unless social distancing measures are put into effect.”

Public health experts we spoke with can’t confirm why 250 is the reference number currently in use, but do say there’s rationale for mass gathering bans like this and for why 250 is significant.

While there’s “no ‘magic number’ for a ‘safe event,’ ” says the University of Washington’s Dr. Nicole Errett, a lecturer in the Department of Environmental & Occupational Health Sciences, canceling or postponing large gatherings is one way to promote the social distancing required to stem the spread of coronavirus.

“If a person with COVID-19 attends a public gathering, people who come into close contact with them may be at risk,” she says. “Any time groups come together, individuals should keep at least 6 feet apart, wash their hands frequently, cough or sneeze into their sleeve and replace their handshake with a smile, wave, nod or other noncontact greeting. It's harder to implement these social distancing measures at larger events.”

“There’s likely nothing special about 250, but as Gov. Inslee said, larger events are both more likely to result in COVID-19 transmission and harder to implement and maintain social distancing etc.,” says Dr. Samuel Scarpino, an assistant professor at Northeastern University in Boston who researches outbreak surveillance. He notes that 300 is the cutoff for certain special events permits. “So I would assume that experience on the part of fire marshals, city planners, etc. resulted in the 250 cut off.”

Dr. Joshua Weitz, a Georgia Tech professor in the School of Biological Sciences and Physics, just calculated and provided risk assessment for COVID-19 infections rates at large gatherings, given recent information about how infectious the disease is:

Take-away point: serious questions should be asked soon about policies for holding large-scale events (and even certain small-scale events depending on locality) that minimize risk for all and preserve public health resources for those who need it most.

Infection risk increases markedly with the size of a social gathering, Weitz says over email. There are about 4 million people in the Seattle metropolitan area: If 4,000 of them were sick but unaware, he says, there’d be a 1/1,000 chance that a random person is sick. “Gatherings of a few hundred people would have a significant chance of having at least one sick person that could spread an infection to many others,” he says.

If only 40 people were sick, the resulting 1/100,000 chance of someone being infected means it would take a gathering of tens of thousands to have a significant chance of having at least one sick person in attendance.

“Restrictions often scale with levels of circulating illness. Given uncertainties in estimating prevalence and substantial evidence of community transmission in Washington, I would gather that public health authorities are being prudent in trying to minimize potential spread via large gatherings,” Weitz says. “It's both sensible and necessary.”

Some data exists to help Seattle adapt to scenarios as risk increases. For example, current approximations for the virus’ r-naught, or rate of infection, are that each infected person can in turn infect 2.2 other people.

Researchers like Dr. Trevor Bedford of Fred Hutch have posited that undetected early transmissions led to as many as 570 infected people in the Seattle area on March 1, with infection rates doubling every 6.1 days. He currently estimates there are between 1,000 and 2,000 active infections in Washington.

Per Weitz’s chart, Scarpino says there’s about a 1% chance of someone with COVID-19 showing up to an event with 250 people. So it can be extrapolated that under current conditions, officials are limiting the risk of an infected attendee to below 1%.

“Just very quickly, I saw that on the weekend of Feb 7 to 9 there were 43 events advertised in Seattle by thestranger.com. Assuming all of those had 250 attendees (which is probably a very low estimate), there’s already a 40% chance that at least one of those events has a COVID-19 attendee,” Scarpino says.

“In my opinion: it is prudent to consider restrictions of gatherings of 200-plus people in a metropolitan area that has excess case counts of 200-plus COVID-19 relative to national norms,” Weitz says. “That doesn't guarantee that transmission events can't occur in smaller settings. But the odds of such events become low very quickly. When they do occur, it may be possible to identify contacts and to facilitate testing and case isolation.”

Weitz points to the recent Biogen conference in Massachusetts as a good example of what could happen without bans in place: With 175 individuals, at least 77 became infected.

Officially, there are only 1,400 cases in the U.S., but experts think many have gone unconfirmed because of the lack of testing and incorrect early assumptions about how the virus spreads. King County has seen 270 cases.

Insufficient testing, Scarpino says, has made us “very nearly blind” to the total number of cases. Based on testing work being done in South Korea, where officials are finally slowing the spread of disease, Scarpino believes we need at least 90,000 tests per day in the U.S. The CDC announced that 75,000 tests had been made available for use by public health labs throughout the U.S., and more than 1 million at public labs and hospitals, last week, though only about 4,900 people had been tested in public health labs as of March 10.

How long will the ban hold?

Anyone planning a wedding, sporting event or concert in the next few weeks will need to wait for answers as to how long the 250-plus-person gathering ban will last.

“Right now, the U.S. is on a very similar trajectory as Italy, so it’s possible local and state governments will consider more severe restrictions,” Scarpino says. “However, even in Italy it’s still possible to eat at restaurants and visit shops. They are just required to enforce a 1 meter buffer between individuals. If we take action now, we can reduce the chance that measures like this are needed.”

“We do not know for sure if [the governor’s ban] would need to be extended because the situation is so fluid right now. We don’t know how long this could go on, so we’re saying people should not be surprised if it goes beyond just March,” says Faulk, the governor's deputy communications director. “I have not heard anything about banning events with attendance of less than 250 people.”

Even if bans on smaller gatherings aren’t yet in place, Weitz says everyone should think twice about how we get together. “Individuals can already take steps at small gatherings to minimize spread and to do their part to forgo big events until we are on the other side of the epidemic curve,” he says.

Every day we delay implementing social distancing, remote working and increased testing, Scarpino notes, will amplify our inability to curtail the virus’ spread in the coming weeks.

As for whether the bans came quickly enough to do so, Scarpino says, “The best time to plant a tree was 20 years ago. The second best time is now.”

Update: This article was updated at 1:55 p.m. on Friday, March 13, 2020 to reflect that Gov. Jay Inslee extended his initial ban on gatherings to all of Washington state.