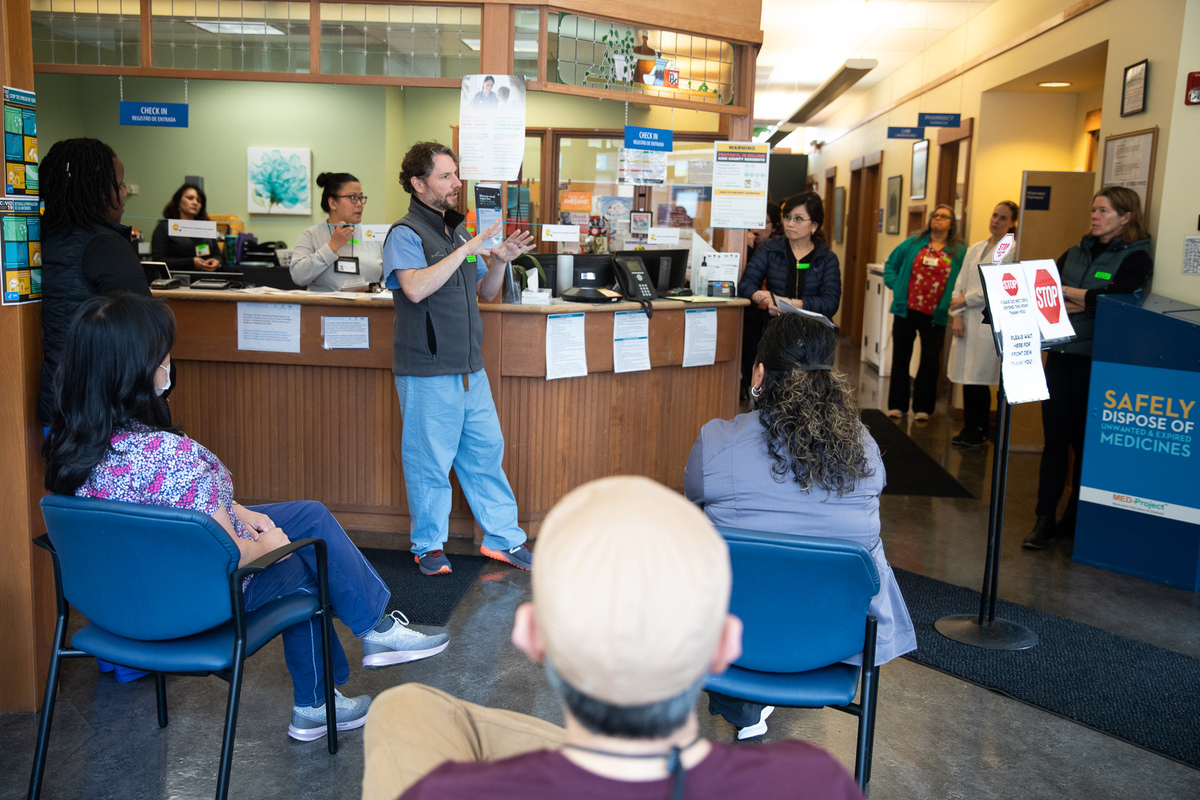 When Gov. Jay Inslee closed Washington's schools March 13, all 15 of Neighborcare Health's school-based clinics shuttered along with them. In an instant, the more than 3,000 patient visits the community health clinic expected for the month evaporated.

A week later, Inslee announced a ban on nonemergency dental procedures. As a result, Neighborcare, which has eight dental clinics in the region, estimates it will lose 90% of those locations' 9,000 monthly visits as well.

The twin reductions, in combination with the widespread switch to telephone-based medicine and a drop in demand, meant that Neighborcare, which serves about 75,000 primarily low-income patients, found itself looking at a loss of $3 million a month, said CEO Michael Erikson. For an organization that spends nearly every dime it brings in, that much of a deficit could be catastrophic.

"We don’t have deep pockets, and we can’t weather that kind of storm," said Erikson.

Recent policy changes and the federal stimulus bill have made the situation only slightly less precarious for Neighborcare. But as COVID-19 continues to stress this country's medical system, community-based health clinics face the difficult task of pivoting to adapt to the pandemic, both financially and in how they care for patients. At a time when public health and government officials prepare for a possible surge of acutely ill patients, the mission of community clinics — preventive, holistic care — is being challenged.

Neighborcare is not alone in its financial struggles. Asqual Getanah, medical director of International Community Health Services, said widespread cancellations of patient visits have forced her organization to furlough about 200 employees, or about a third of its staff. Esther Lucero, CEO of the Seattle Indian Health Board, said her clinic is facing losses of $700,000 to $900,000 a month. Raleigh Watts, CEO of Country Doctor, said grant money has steadied its ship for now, but that the situation is touch and go.

The blows are coming from all directions. Reduced caseloads, shuttered clinics, an increase in clients without insurance, a decrease in donors — all add up to less revenue.

Beyond dollars, many of those same clinics are also raising concerns about what the COVID-19 outbreak could mean for their clients. They question whether the response has been equitable. Access to testing was slow to ramp up across the region, but especially so for clients of small clinics.

"These are the fundamental undercurrents in our culture," said Erikson. "Community health centers are often considered last and the patients we serve are also considered last."

Even when he lost his insurance in 2008, Lau Van Vo never missed his appointments at International Community Health Services. The 71-year-old Vietnamese refugee suffered a stroke in the early 2000s, and the regular visits were crucial to his recovery.

Lau worked for years helping to run a beauty salon while also delivering newspapers in the morning. But as the cost of his premiums rose, the payments became too steep — so he gave up his health plan.

Yet he was never turned away from the clinic. He paid what he could —  between $20 and $100 a visit — and that was enough for him to continue his rehabilitation until he regained coverage through the Affordable Care Act. Known as "Uncle Lau" around the clinic, he credits the health care he got with keeping his improvement moving forward and, he said, saving his life.

"The clinic is always making it more convenient for the patients who come inside," he said. "They're so nice to me. The doctors, the nurses inside — we have a good relationship."

Particularly for low-income and immigrant communities, these clinics serve as culturally competent entry points into the medical system. About 70 percent of patients for both Neighborcare and ICHS are considered low-income. At ICHS, over half need interpretation services.

Especially for those who've come to distrust large institutions, these small clinics pride themselves on tailoring services to regain that trust. Lau still marvels at the greetings he receives in the foyer and the interpreter who is always available to help him understand the complex medical language.

Beyond the holistic qualities of community clinics, say providers, they're also an alternative to the only other option for people with little or no insurance: the emergency room. If not for community clinics, many of their patients would have to resort to nearby hospitals, which now are trying to reduce visits to free up space for COVID-19 patients.

"If we think about the dollars that were allocated in response to this crisis, right off the bat the focus has been on hospitals," said the Seattle Indian Health Board's Lucero. "But we can really mitigate the impact on hospitals."

‘A fire that nobody sees’

Testing for COVID-19 has been slow to roll out across the region and country. But as large institutions like the University of Washington started scaling up their testing capacity, community clinics' ability to get their patients tested lagged even behind that.

"There's a significant equity issue," said Lucero. "People with insurance were able to acquire a test. But here, for two to three weeks, we only had 20 tests."

Watts of Country Doctor said he's concerned that the virus has been allowed to spread even more quietly through low-income communities as a result. "There is an equity issue around this whole virus," he said. "If you had good insurance, if you were part of Kaiser, if you had a car, you could get a COVID-19 test."

"We’re fighting a fire that nobody sees," he added.

In mid-March, Public Health — Seattle & King County acquired an additional 4,000 test kits from the federal government. Kate Cole of Public Health said many of those have been distributed to community health partners.

Beyond just access to testing, community clinics don't have the staffing, resources or infrastructure to prepare as quickly for a pandemic.

"I think the larger organizations, which tend to take more commercially insured or resourced patients, were able to pivot a little more quickly than we were," said Dr. Meena Mital, chief medical officer of Neighborcare.

"We haven’t had the historical need to gear up to manage infection control to the level that you have to with testing, at the scale and amount you need to," she added.

The process is improving. Neighborcare now has outdoor space for testing at some clinics, and other clinics said they're creating more space between patients who show symptoms of COVID-19 and everyone else. Swedish hospital recently began allowing some community clinics to use its testing facilities to process kits.

Desirae Caton, an obstetrics nurse at Neighborcare's Rainier Beach branch and a patient at its Columbia City branch, said she's been impressed by the clinic's ability to adapt and pivot. Her clinic is constantly adapting care to fit the needs of its patients, who come from a wide range of backgrounds and circumstances. "We still have this true north," she said. "We still want to serve our patients. How can we do that with the least risk?"

In the first two weeks of March, Sharissa Tjok, outreach and enrollment coordinator for International Community Health Services, said her team received about 100 people who lost their employer-provided insurance after being laid off. In the whole month of March in 2019, it received just 65.

"It’s kind of a lot and this is just the beginning, I think," said Tjok.

Many of those newly unemployed people may enroll in Medicaid or plans through the Affordable Care Act; Washington is one of 11 states to allow special enrollment periods. But some may not qualify for the former and may not be able to afford the latter.

An increase in patients without insurance is just one of the many factors making the math difficult for community clinics. The clinics are considered a "last resort" stop for patients, meaning they don't turn people away for not having insurance — despite the financial hit that comes with that.

Some of the most dire financial shocks facing community health clinics have subsided in recent weeks. Clinics can now be fully reimbursed by insurers for telehealth, which is proving to be a lifeline for both the clinics and their patients. Country Doctor's Watts said 80% of their visits are now done this way.

Additionally, the massive federal stimulus package included $1.3 billion for community health organizations. It's still unclear how much of that each individual clinic can expect, but Neighborcare's CEO Erikson guessed his clinic may see up to $1 million.

And there's also been an uptick in local philanthropy. The Seattle Foundation recently announced gifts of $250,000 to both International Community Health Services and the Seattle Indian Health Board. Watts said Death Cab for Cutie, the Seattle-born band, recently hosted a fundraiser on Country Doctor's behalf.

But the sum of all these parts still don't add up to what's been lost so far. "As these financial pressures mount, this community does not want us to shutter doors in any way shape or form," said Erikson. "Having [the clinics] disappear would be a profound impact on the community."

Already, the preventive programs offered by clinics have been curtailed. Mammograms and colonoscopies are not happening. Substance use gatherings have been paused. Echo Hawk said outreach to people experiencing homelessness has stopped.

Although not all clinics have had to do layoffs or furloughs yet, the future remains unclear. The same question hangs over the heads of restaurants, construction companies, those waiting for surgery, schoolchildren and everyone stuck inside who's wondering when they will get their next paycheck: How long can we survive?