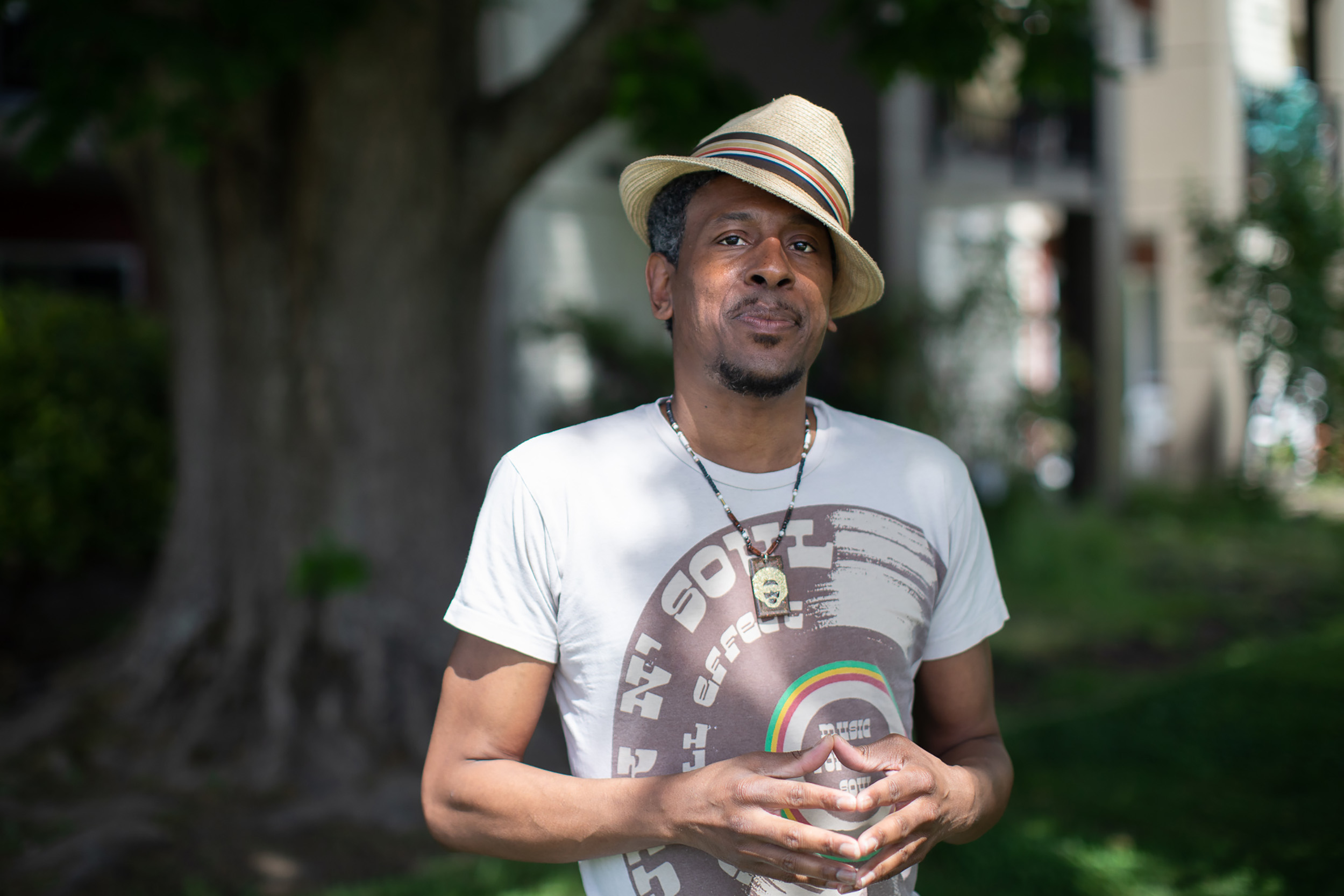 Kenny “KJ” Jones has been without work since the pandemic proliferated across the region and service related businesses closed in an effort to curb the spread of the virus. “I feel like we’re going to be the last of everyone to return to work,” Jones says. “There’s a lot more people of color in the service industry, so we’re being affected much more than some others.” Photographed in Shoreline, King County, May 28, 2020. (Matt M. McKnight/Crosscut)

Communities of color are bearing the brunt of the economic catastrophe among workers in King County, a phenomenon both troubling and unsurprising to service providers and community advocates.

Workers of all demographics are taking it on the chin as unemployment nears 15% in King County.

But between March 1 and May 16, the rates of unemployment are 40% for Native Hawaiian/Pacific Islanders; nearly 30% for American Indian/Alaska Natives; 28% for Black residents; and 20% for Hispanic/Latinx workers, according to state data.

Even those high rates may not capture the full scope of the financial pain among nonwhite workers, said Janice Deguchi, executive director of Neighborhood House. Language barriers, lack of access to technology and immigration status all mean some people who are not working may not be filing unemployment claims at all.

“It’s bad and it’s even worse because some of the people are not represented in these numbers,” she said.

Unemployment rates were higher for most nonwhite communities even before the COVID-19 pandemic. But the wave of layoffs and furloughs has only amplified the preexisting disparity.

The low jobless rates of the past several years masked just how precarious the financial picture was, Deguchi said. The reality was that many people, particularly in immigrant communities and communities of color, were balancing multiple low-wage jobs just to get by, and the coronavirus has now toppled that house of cards.

“It’s really scraping off that veneer of everything’s OK when really it’s not,” she said.

“There was already a vulnerability in those jobs, a questionable amount of job security in the jobs people of color had access to,” said Marcy Bowers, executive director of the Statewide Poverty Action Network. “When there was this much downward pressure on the economy, those were the first to go.”

White workers in King County are much more likely to work in management or professional services, which may better translate into remote work. Nonwhite workers, meanwhile, hold a much larger proportion of jobs in retail, the service industry, transportation or construction — all of which have been wiped out by the response to the pandemic.

“It just so happens that a lot of us are working in these service industry jobs,” said KJ Jones, who was laid off from both his job as a bartender at the Crescent Lounge on Capitol Hill and at the cafe inside the Seattle Art Museum. “You can’t bartend from the house; you can’t cater an event from the house. The tech jobs on the other hand, where people are working from home, it’s easier for them.”

Jones is receiving unemployment, although he’s seen delays in payment recently as the state tries to wrap its arms around the vast fraud network that has hit its system. Like many people out of work, he first thought it would be a couple of weeks, then maybe a month.

“In the beginning it was like, ‘OK, we’ll have a little time off,’ ” Jones said. “But then it kept lingering and lingering and they kept pushing things off. So then things got a little more nervous.”

Travel, too, has been an enormous source of employment for many immigrant communities. Within King County’s large community of East African immigrants, many drive for Uber or Lyft or work at the Seattle-Tacoma International Airport. With flights all but halted, so too has the work.

“These are the kinds of jobs which you can’t do from home,” said Sophia Benalfew, executive director of Ethiopian Community in Seattle.

Zenabech Haile, an Ethiopian immigrant, had worked as a janitor at the airport for nearly two years before the coronavirus hit. She and her husband live with their four children in South Seattle, off of Rainier Avenue, and her salary is crucial to their ability to pay for food and rent.

But as traffic through the airport dried up, the contractor that employs her began to lay off people. Haile was among them. She was gripped by the same fear that has touched thousands of people who had been living on the brink.

“It was not good for me or my family,” she said.

The devastation of major employers like the airport or Southcenter mall, which has gong quiet, is reflected in ZIP code data mapped by King County. While certain areas in downtown Seattle or near the University of Washington have kept unemployment rates below 15%, per capita unemployment in the area just west of the Sea-Tac airport now exceeds 40%.

No ZIP code immediately adjacent to the airport has an unemployment rate below 30%.

Hugo Garcia, economic development program manager in King County’s Department of Local Services, said the eye-popping unemployment numbers in south King County reflect where many of downtown’s service industry workers live, laying bare the stratification of race and class that has worsened since the last recession. When Amazon, for example, encouraged workers to stay home, it was the communities south of Seattle that saw their work disappear.

“Unfortunately, the communities of color of south King County are bearing the brunt of the economic impact,” Garcia said, adding, “All these communities are the ones that go into Seattle and work.”

No one expressed surprise about the disparate unemployment rates; recessions always hit communities of color harder. By 2010 — in the midst of the last financial disaster — unemployment for Black Americans was 16%, compared with 8.7% for white Americans.

“It depends too on who are your friends, community and network and do they have significant savings and resources, too?” said Brianna Kiarie, associate director of education and community services at Neighborhood House. “So, if you’re in a community where your closest friends and network are not full of resources financially, you also don’t have access to that broader network of financial support.”

Benalfew said the Ethiopian community is often quick to lift one another up. But that becomes difficult when everyone is suffering. Meanwhile, health care, housing, food — all are at risk.

“Our community is really a tight community and people do support each other,” said Benalfew. “That’s just our culture. But in this situation where everyone is hit at the same time, then it’s really difficult to look for support from others because we’re all in this together.”

After being out of work for about a month, Haile managed to find hours cleaning at Harborview hospital, which she secured with help from Kamaria Al-Harazi, a case manager with Neighborhood House.

Al-Harazi was pleased with the success she had finding Haile work. But Haile is just one of the many new clients Al-Harazi has tried to help in the past several months, mostly immigrants and people of color. It’s a sobering new reality, said Al-Harazi.

“People are suffering out there.”

Correction: A previous version of this article stated that KJ Jones worked as a caterer for Seattle Art Museum. In fact, he is an employee of Bon Appetit, which operates food services inside the museum.