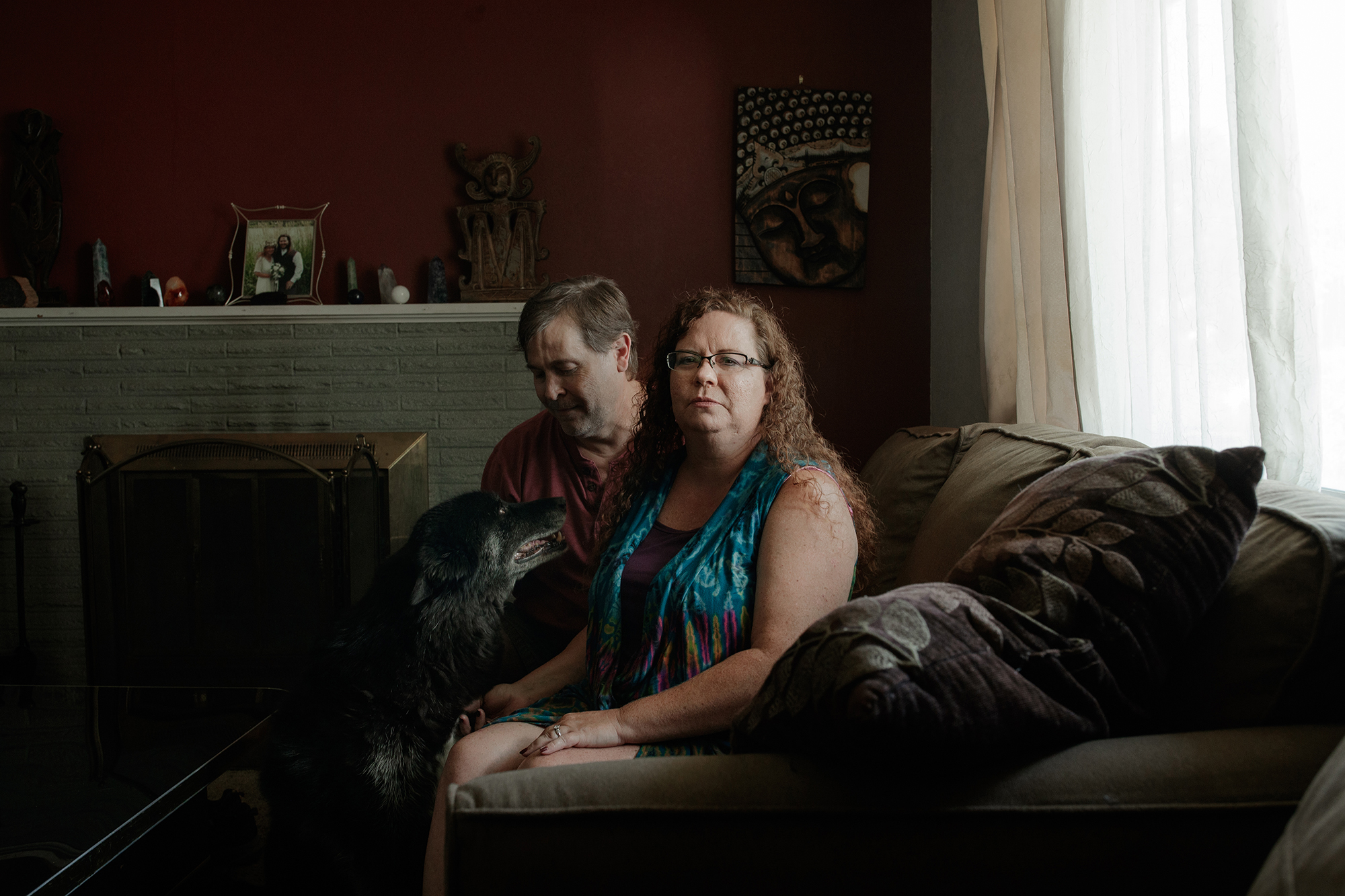 Sara and Daryle Gardner with their dog Romeo at their home in Spokane, Washington. She lost her job due to the pandemic and was receiving unemployment. (Rajah Bose for Crosscut)

Sara Gardner had considered applying for food assistance earlier this year, but with the extra $600 she was receiving each week from unemployment compensation, she decided against it. Better to wait, she thought, and keep it for another time, when she might need the extra help a little more.

Now, that time may arrive soon.

As Congress limps toward its next round of COVID-19 relief, thousands of people like Gardner in Washington state find themselves hanging, Looney Tunes-like, over a cliff and waiting to fall.

And if they do, some fear that the worst effects of closing the economy — delayed by trillions in federal spending — could become reality.

In the early weeks of Washington state’s response to the pandemic, as restaurants and offices first began to shutter, applications for cash, housing and food assistance spiked. Around the same time, according to researchers at Columbia University, the state’s poverty rate jumped from about 8% to over 11%.

But in recent months, data indicates the opposite is true. The number of people seeking help from so-called welfare programs in Washington state has trended downward and was even lower than the same weeks in previous years.

The poverty rate in Washington is believed to be less now than before COVID-19 arrived in the state.

The reason, say experts and administrators of assistance programs, is in large part thanks to the federal Coronavirus Aid, Relief and Economic Security (CARES) Act. With an extra $600 a week, families and individuals didn’t need and maybe didn’t qualify for what limited emergency assistance existed before Washington went into lockdown. Some earned more on unemployment than they did at their previous jobs.

But those added benefits are set to expire at week’s end, and many expect Washington residents will once again turn to the state in droves for help — where they may not find what they’re looking for.

“I think we could potentially see some of the folks that are losing that additional $600 benefit slip back [under the federal poverty level] and we could see them applying” for food assistance, said Babs Roberts director of the Community Services Division of the state Department of Social and Health Services. “That could certainly happen.”

Gardner, who lives in Spokane, was set to start a new job with the U.S. Census Bureau in the spring. Her husband recently suffered a heart attack, which rendered him unable to work, leaving her their sole income earner.

But as COVID-19 settled in, her start date kept getting pushed back. Months later, she’s still out of work.

Under normal circumstances, Gardner would not be eligible for unemployment. But with the expanded disaster relief, she started receiving the $600 checks in March.

“If we hadn’t had that $600, we’d be homeless,” Gardner said. “Everything that I did with it was pay bills. I was behind on my power bill; I was behind on my water bill.” Her “splurge,” she said, was getting out of debt. “Oh, my God,” she thought to herself, “at least we’re not homeless.” 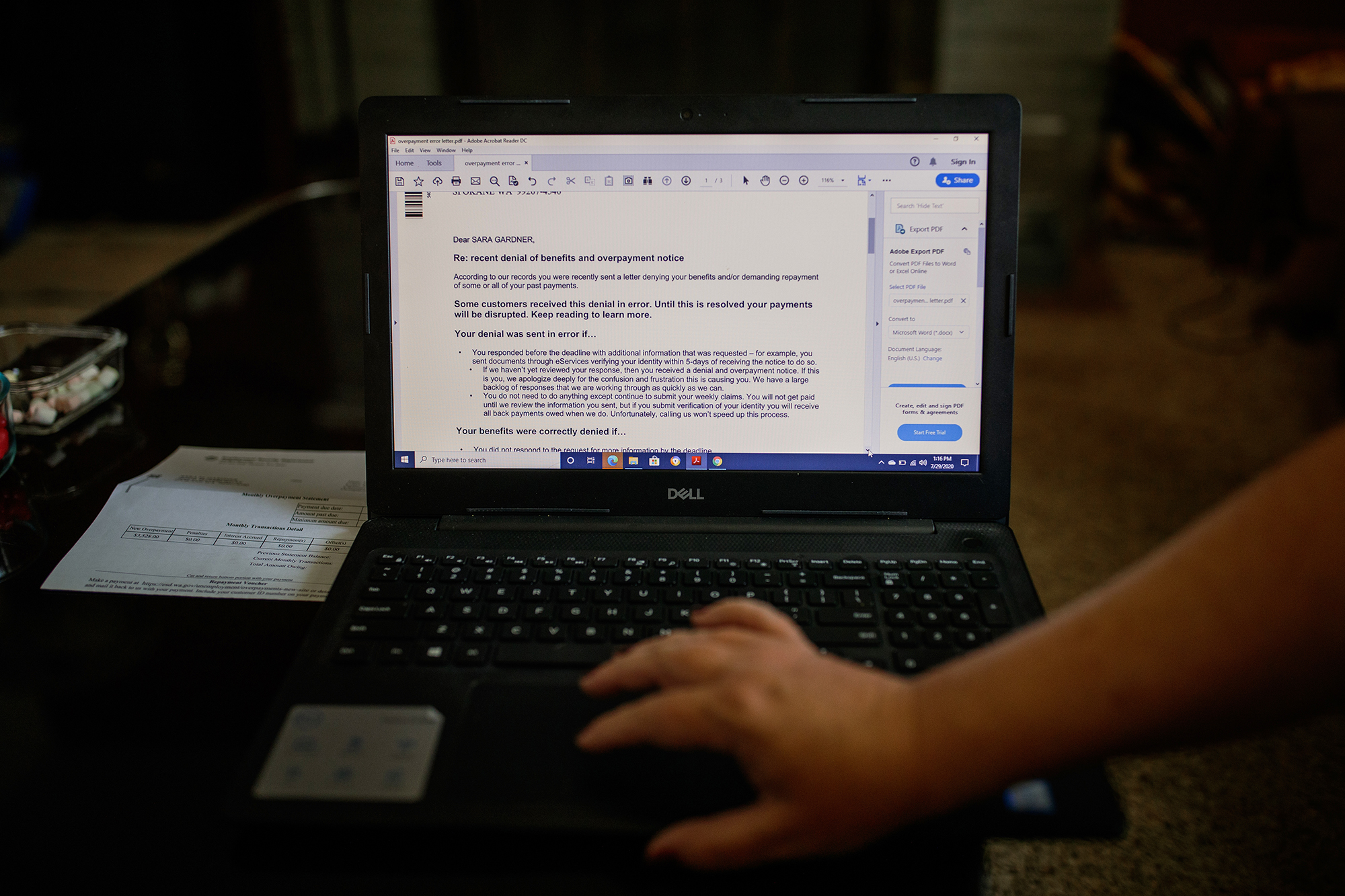 A digital letter from the Employment Security Department informs Sara Gardner she is being denied additional benefits and details, after receiving unemployment checks for the past few months. (Rajah Bose for Crosscut)

A digital letter from the Employment Security Department informs Sara Gardner she is being denied additional benefits and details, after receiving unemployment checks for the past few months. (Rajah Bose for Crosscut)

Liz Schott, senior fellow with the Center on Budget and Policy Priorities, a progressive think tank based in Washington, D.C., has a word for Washington state’s safety net: “skimpy.”

“It only really picks up people who have no income,” she said.

In the time between when the Washington economy began to recede and before people could receive unemployment — when thousands of incomes were down to zero — more people turned to that safety net.

In recent weeks, however, applications for all three are lower even than pre-pandemic periods, according to DSHS data. In the second week of July, for example, the state saw about 1,500 fewer SNAP applications than in the same week of 2019 — a nearly 20% decline.

DSHS’s Roberts said some of that may be because of how many people applied at the beginning of the pandemic.

But, she added, “I definitely think the additional unemployment benefits and some of the other community level supports could be playing a role in helping stabilize people.”

Since the CARES Act was passed, researchers with Columbia University project that poverty rates in Washington declined as well, from just over 8% before the pandemic to about 7% now.

Republicans in Congress have pointed out that some people are earning more on unemployment than from their jobs, and that's a reason, they argue, the assistance should not be extended at the same level.

For others, however, the impact of that $600 illustrates just how thin the margins were for people  before the pandemic.

“The core problem is that what a lot of people were making before the pandemic was not sufficient,” said Marcy Bowers, executive director of Statewide Poverty Action Network, a nonprofit anti-poverty advocacy organization.

Katrina McLitus is an independent, in-home caregiver and a single mother with two young boys. When the pandemic arrived, her clients decided it was best to limit contact with the outside world and her work hours vanished.

With regular unemployment income, plus the extra $600, she was able to pay back money she had borrowed and stay on top of most of her bills. “I'm grateful the CARES Act kept me a smidge above my normal means,” she said.

But she has no idea what comes next. Work is still thin, and, even if she could find the hours, it’s looking less and less likely her boys will return to school in the fall. Her mother recently died, leaving her both heartbroken and without assistance caring for her kids. She worries about losing the extra income.

“Imagining the fallout from that alone keeps me up at night,” she said. Her back-of-the-envelope math suggests normal unemployment “will cover my rent and one of my utilities. That's it.” 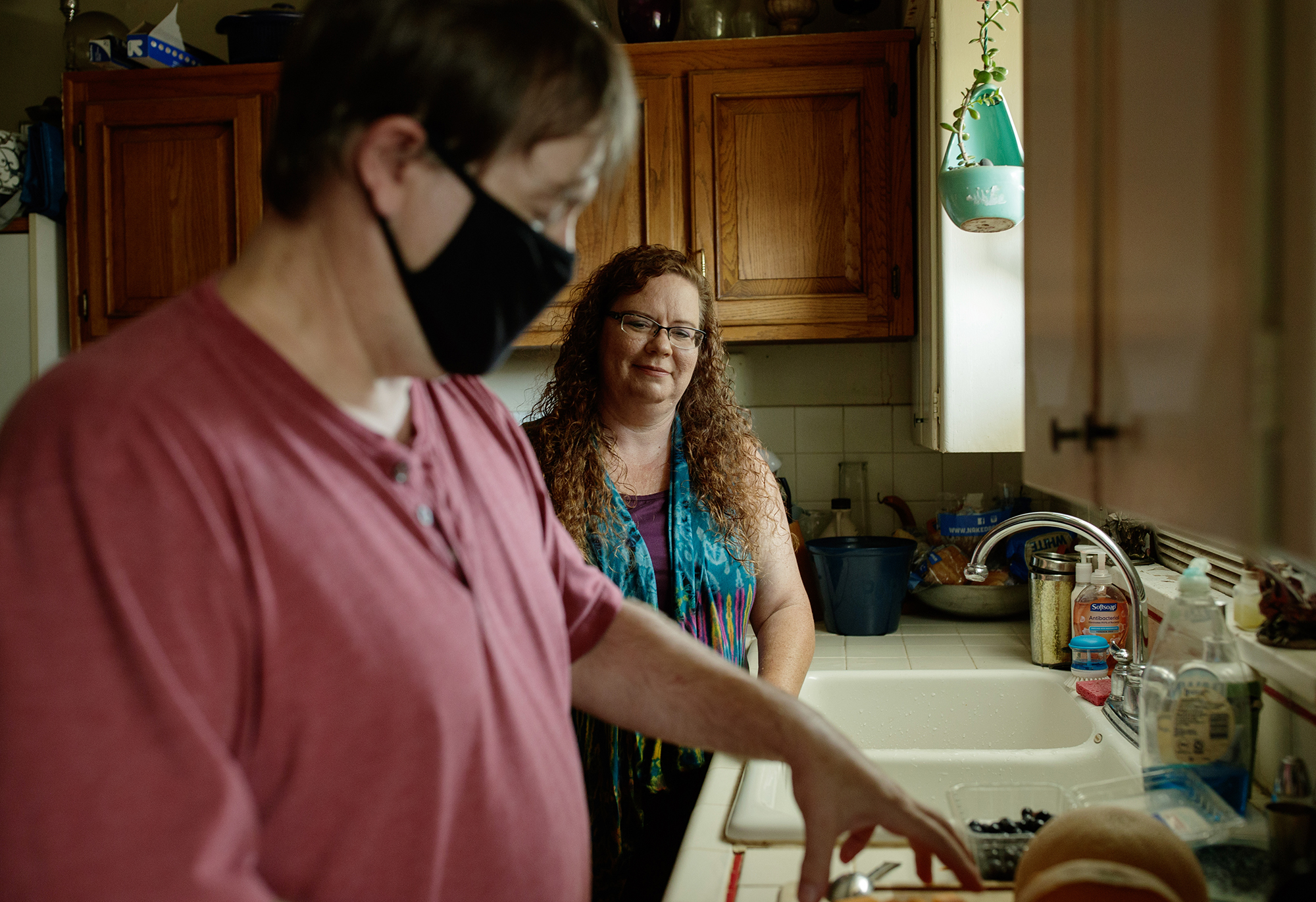 Daryle Garnder makes lunch for his wife Sara Gardner at their home in Spokane, Washington. Sara lost in her job due to the pandemic and was supporting her and her husband on a $600 unemployment check. (Rajah Bose for Crosscut)

Daryle Garnder makes lunch for his wife Sara Gardner at their home in Spokane, Washington. Sara lost in her job due to the pandemic and was supporting her and her husband on a $600 unemployment check. (Rajah Bose for Crosscut)

The future of COVID assistance is still unclear. Republicans have proposed temporarily reducing the extra unemployment income to $200 a week while they work out a plan to provide people with 70% of their normal income. Democrats, meanwhile, support extending the $600.

The uncertainty — and stress — for families is immense.

“I’m just incredibly frustrated with Congress and the Senate having drug their feet on this,” said Jennie Romich, director of the University of Washington’s West Coast Poverty Center. “Because it’s one thing to say we don’t want to provide this generous benefit anymore, but it’s another to not have their act together with a replacement. It’s going to lead to a lot of instability.”

Bowers of the Poverty Action Network said some of the burden could fall back to the state. “I would anticipate that if [unemployment assistance] goes substantially lower then we will see an uptick in applications for state benefits,” she said.

Beyond unemployment income, help can be hard to find at the local level. DSHS’s Roberts said she would expect SNAP applications to increase again. The state has also already given out nearly 50,000 one-time disaster relief payments.

But the threshold for TANF is so low that, even without the $600, unemployment income disqualifies families. Simply put, unrestricted cash for individuals, as was contained in the CARES Act, is a rarity.

“The thing that I keep coming back to, that we’ve seen in this pandemic, is the importance of cash,” said Bowers. “Cash that is relatively unrestricted is so much more important than we’ve given it credit for.”

A major sticking point for Republicans in Congress is that the increased benefits is making it harder for employers to lure back workers.

At least one study out of Yale, however, suggested that unemployment did not make workers less likely to return to work. Other studies back up the notion that the increased benefits have buoyed spending and the economy and could lower unemployment in the long run.

“There aren’t jobs to go back to,” said UW's Romich. “I don’t put a whole lot of weight in that.”

Asked if the increased unemployment she’s received made Gardner less likely to return to work, she didn’t hesitate.

“I have to say that dealing with [Washington state's Employment Security Department] has been more stressful than any kind of job I have ever had in my life,” she said. Gardner has spent many hours battling the department, which has sent her letters multiple letters saying she owed them money, even as she kept receiving payments. “I would much rather have a job.”

There is one factor that makes Gardner hesitant to return to work, however. Her husband is vulnerable, she said, and she fears bringing home the deadly virus. So is she hesitant to work? Yes, but not because she’s living high on the hog.

“This has been the scariest time I’ve ever been through,” she said.