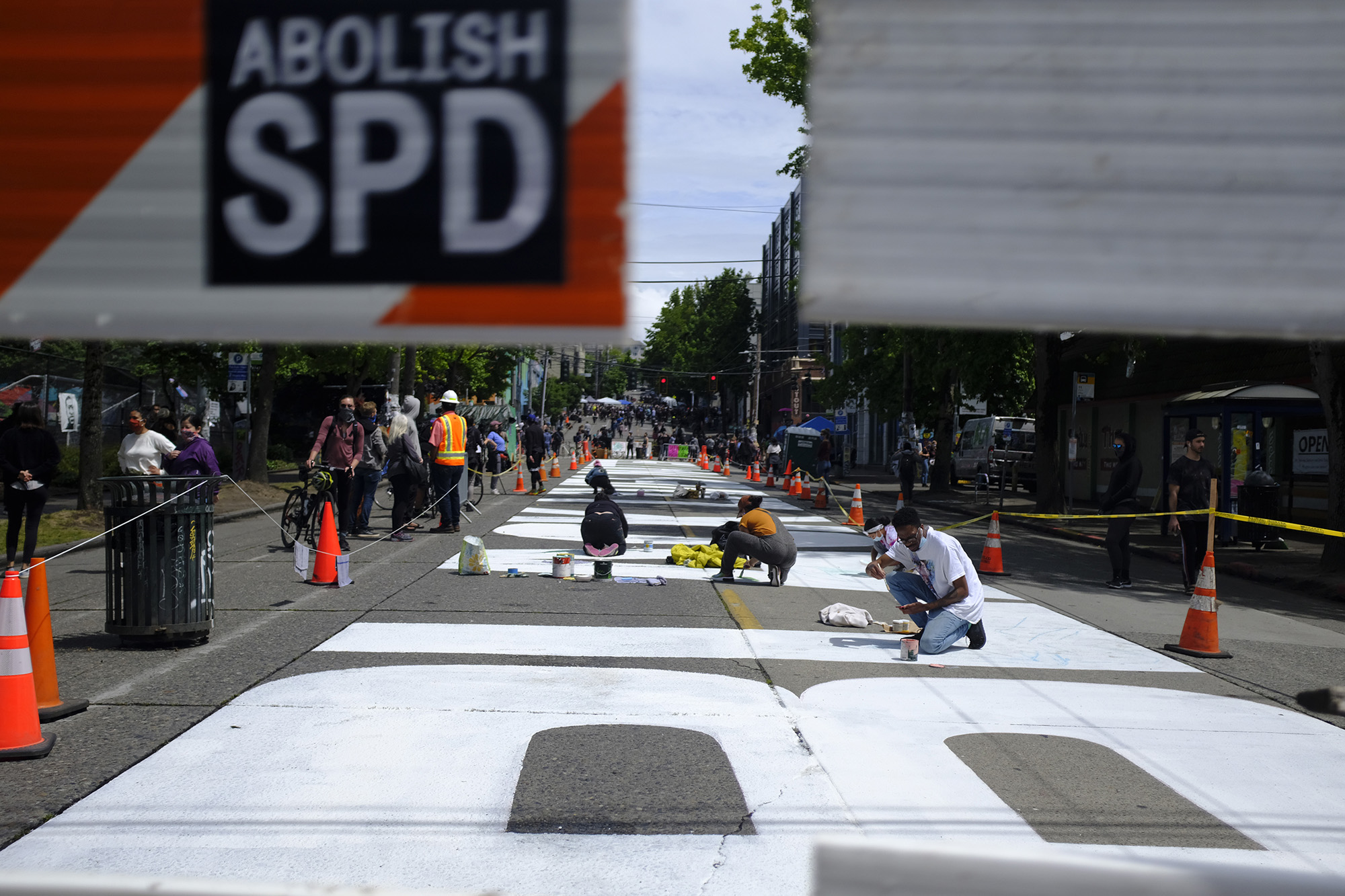 Much has been made about the “veto-proof” majority of Seattle City Council members who committed on Twitter and elsewhere to cutting 50% of the Seattle Police Department’s budget. But in the near term, the reality is proving more complicated.

On Friday, council members for the first time offered specific proposals and timelines for cutting the department’s budget and creating alternative systems to prevent violence and provide community safety. They also urged Seattle Police Chief Carmen Best to prioritize responding to violent crimes and to deprioritize calls that could disproportionally impact communities of color.

Only one council member, Kshama Sawant, proposed immediate and blunt cuts that could slash close to 50% of the department’s remaining 2020 budget. The rest offered proposals for this year that would slice 100 full-time equivalent positions — out of 1,428 fully trained, probationary and recruited officers — from the department through layoffs and attrition, while shuffling some police functions into other city departments.

“There are, no doubt, roadblocks to us being able to do that 50%,” Councilmember Tammy Morales said in an interview Friday, as the council began to look at specific proposals for cutting the police budget. “But what we’re presenting today is the downpayment…. We do plan to continue this work through the next six to nine months, really understanding what would a community safety department system look like that doesn’t center police but really is about violence prevention and safety.”

"The overarching goal really is to transform community safety," she said. "That’s the big picture here."

Members of the council emphasized, with near unanimity, that this was the beginning of a longer path toward rebuilding the city’s public safety systems and that the conversation would continue as the council transitioned into planning for the 2021 budget this fall. Council staff estimated Friday that the council's proposed cuts and transfers from the Seattle Police Department could result in nearly $170 million in budget cuts next year — or over 40 percent of the department's budget.

But, in the immediate term, a resolution introduced Friday that laid out the council’s long-term goals and timeline acknowledges that “the Council is unable to immediately effect all the changes demanded by community” in 2020.

The voting on the resolution and proposed amendments to SPD's budget will begin next week.

The council’s ambitious goal to create what members hope will be a more equitable and effective system of public safety comes in the wake of massive protests against police brutality and a pandemic that’s decimating the city’s budget.

Councilmember Lisa Herbold said the biggest obstacles toward making substantive and immediate cuts relate to the city’s contracts with the police unions, the fact that much of the department’s 2020 budget has already been spent and the city charter, which states all parts of the city must have adequate police presence.

The proposed resolution — which is nonbinding — states that the council intends to create a civilian-led Department of Community Safety and Violence Prevention by the end of 2021. The details of its structure and mission will depend on research and input from some of the leading voices calling for defunding the police department, including King County Equity Now and Decriminalize Seattle.

Reacting to the proposals, members of King County Equity Now said they were disappointed with the council’s slate of proposals. The council’s “proposed amendments today are undoubtedly a step forward,” the organization said on Twitter. “But they fall well short of the Community’s demand to maximize public safety by reallocating 50% of SPD’s budget into pro-BIPOC [Black, Indigenous, People of Color] community initiatives.”

Sawant, who is advocating for more immediate and aggressive cuts, laid into her colleagues. "We predictably see that when it comes time for the actual council budget amendments, the majority of the council members do nothing even close to defunding the police by 50%," she said.

As part of the emergency budget meetings this summer, which the council and mayor were forced into by the pandemic-induced economic crisis, a number of proposals to reduce SPD’s funding already have multiple council members signing on.

The council cannot force how Chief Best responds to budget cuts. But the proposals nevertheless target specific units, including mounted patrol, SWAT, public affairs, community outreach, event management, school placement and elsewhere. Focusing on specific areas in the department "sets us up for a bargaining conversation that we will prevail in as opposed to an approach that is just, cut X number of police," said Herbold.

One proposed cut from members Lorena González, Teresa Mosqueda, Morales and Herbold cuts would cut the salaries for 32 patrol officers. Another, from the same council members, would take away money to replace an additional 30 officers who are expected to leave the department by the end of the year.

The Navigation Team, made up of police officers who oversee outreach and cleanups in homeless tent encampments, would be greatly reduced or eliminated under a few different proposals.

Any savings would be unlikely to arrive in 2020 because of likely labor negotiations surrounding the layoffs, something the council’s staff acknowledges.

Best has said she supports working to restructure policing in Seattle, but has vehemently opposed 50% cuts.

“I do not believe we should ask the people of Seattle to test out a theory that crime goes away if police go away,” she said in a recent video to officers. “That is completely reckless. It’s an abdication of the duty every leader of this city swears to when they take their oath of office.”

Best has said that, if forced to lay off officers, union rules would force out the younger, more diverse class of officers. The latest recruits were 39 percent people of color, the department's most diverse class to date, according to council staff. Council members have urged her to seek an exception to that rule from the city’s Public Safety and Civil Service Commission, although Councilmember Debora Juarez on Friday questioned whether that would be legal.

Mayor Jenny Durkan, meanwhile, has said she also supports a “reimagining” of the police department in Seattle. But her proposals — to cut $20 million from the department and move 911 operations and parking enforcement away from police — would not result in immediate layoffs.

The subject of whether and by how much to “defund the police” — one of the central demands of anti-racism protesters — is contentious. Durkan called the council’s pledges to cut 50% “irresponsible,” and a petition against making dramatic cuts, started by the city’s largest police union, has gathered thousands of signatures.

Most of the council is on board with the ultimate goal of cutting 50%, but it’s not unanimous. Juarez said she supports dramatic transformation, but questioned the early pledges from her colleagues to make such large cuts. “That 50% pledge to cut SPD, that can’t be done and that has always been my point,” she said.

In addition to cuts to the police, several of the council’s proposals would move millions toward expanding and advising organizations that could, in theory, carry out the mission of making public safety more community-led, although only a handful of organizations have actually been identified as possible alternatives to police. One proposal would move $17 million from other pots of money, including from the city’s emergency reserves, toward “community investments.” Another proposal would increase funding to the city's Human Services Department for its community safety program.

The council will begin voting on the amendments next week and is scheduled to vote on a final revised 2020 budget — including changes not related to police — on Aug. 10. The council will then quickly move into budget negotiations for 2021.