Two years after the failed ‘head tax,’ the city council found a new path forward, without the same opposition. 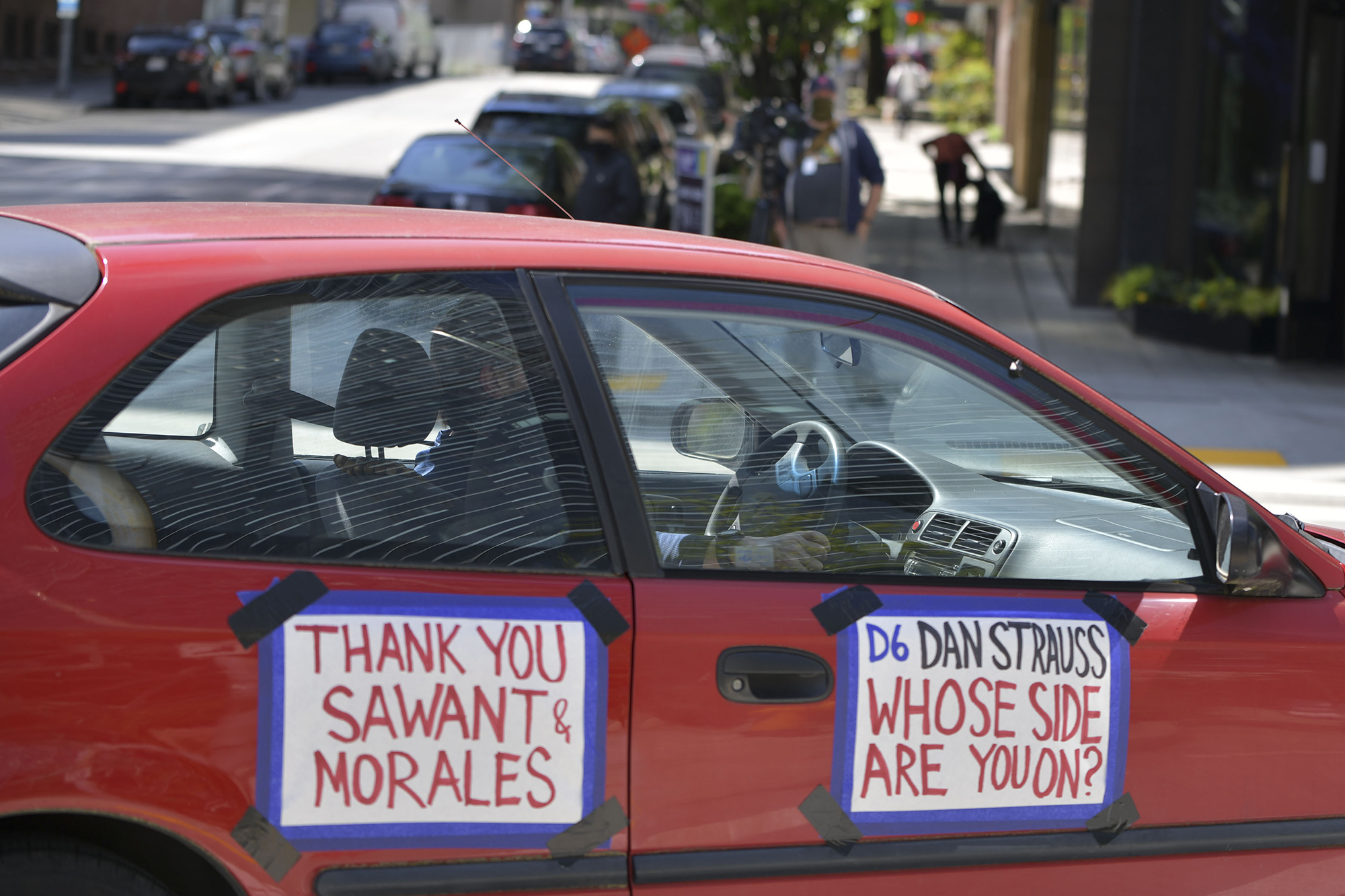 Supporters of a tax on Amazon and other big businesses caravan through downtown, May 1, 2020. (Damairs Carter/MediaPunch/IPX/AP)

As Seattle City Councilmember Teresa Mosqueda began laying the groundwork in early spring for a proposed new tax on large businesses, one of her earliest conversations was with Expedia, the travel-booking giant.

The company, recently relocated to Seattle from Bellevue,  had never explicitly opposed the contentious “head tax” on large businesses the council passed in 2018, declining to sign on to a proposed referendum that helped lead to the measure's eventual repeal. And when a payroll tax came up in Washington’s 2020 legislative session, company representative Richard Lazaro testified in its favor and did not condition that support on banning cities from passing additional taxes, as other businesses had done.

Of all the city’s major tech companies, including behemoth Amazon, Expedia had been unique in its stance toward taxes, puncturing the veneer of unanimous opposition from the business world.

These were not the only conversations Mosqueda was having; labor, academics and advocates were looped in as well. In an interview, the council member, who represents the city at large, gave a large share of the credit to the “Tax Amazon” advocates who had pushed for a ballot measure this fall.

But even as the city council seems to coalesce around an increasingly progressive agenda, Mosqueda’s belief in having business involvement nevertheless gets at the heart of the divergent political philosophies on the legislative body.

As Mosqueda was writing her proposal, council members Kshama Sawant and Tammy Morales had already offered their version of a business tax — a larger and less discriminating proposal. At the proposal's introduction, Sawant said she neither expected nor desired endorsements from large businesses. “The door is open for them, but we are not going to hold our breath,” she said.

Sawant, an outspoken socialist, did not and does not view the involvement of companies like Expedia and Ethan Stowell Restaurants in the tax discussions as a positive influence. To the extent they’re at the table, she said, it’s because the businesses were left no choice. Supporters were rapidly gathering signatures to force the issue to the ballot.

Mosqueda’s proposal passed last week, 7-2, with yes votes from Sawant and Morales. It will affect businesses with over $7 million in payroll, exempting the salaries of employees earning less than $150,000. It’s expected to raise about $200 million a year in revenue.

The successful legislation took its cues from an ultimately doomed, state proposal from Rep. Nicole Macri, D-Seattle, that garnered a broad base of support.

Compared with circumstances surrounding the 2018 head tax, opposition has been less vocal, in large part because the tax exempts grocery stores and is more likely to land on businesses that can afford to pay high salaries. So far, there have been scant signs of a coordinated effort to repeal the tax by referendum, as happened in 2018. This city council has given no indication it will consider rolling it back as it did then.

For Mosqueda, business involvement was only a part of what led to the tax’s approval and apparent staying power — but it was an important part. She pointed to San Francisco, where software giant Salesforce supported a business tax, helping inoculate the legislation from opposition.

“When we are asking the largest companies in Seattle to pay a portion of the tax on those who are the highest income earners, and we can stand shoulder to shoulder with businesses who are saying, ‘Yeah, I get it, this is actually going to help the business climate here, it’s going to help more people live in this city, it's going to help people have money to spend in their pocket’ … then I think it helps voters see that this is not a policy that was just thrown together,” she said. “This is truly transformational in how we address the revenue needs in our city.”

Sawant, on the other hand, said that the tax’s approval was “entirely because of the power of the movement.” While she appreciated Mosqueda’s work, she said she did not agree with her approach.

“I really appreciate all the work she's done,” Sawant said in an interview. “But as I've said, I don't agree with this approach of trying to tailor what policy can be won in city hall to what's acceptable to big business at the end of the day. You can win against big business if you build a strong enough movement.”

In 2018, large amounts of money from big businesses, including Amazon, were the main driver in sinking the head tax at the time. But public opinion was not helped by opposition from labor unions and, most notably, Uwajimaya, the beloved grocery store anchored in the Chinatown-International District.

Part of Mosqueda’s approach addressed what made their opposition so potent. The tax is written to spare businesses, like restaurants and grocery stores that might have a large payroll and lots of lower-wage employees — making it what Danny Westneat of The Seattle Times called the “boss tax.”

“What was harmful in 2018 was our everyday businesses that we go to who are operating on relatively thin margins saying that they would be impacted,” Mosqueda said. “So think about Uwajimaya, for example. We want to recognize, especially in a post-COVID world, that not all businesses are the same, even some of the largest businesses.”

By exempting grocery stores and raising the threshold for who pays the tax, opposition from the business community was not as united. The Seattle Metropolitan Chamber of Commerce and the Downtown Seattle Association both spoke out against it. But Uwajimaya stayed quiet, as did other small businesses. Additionally, Ironworkers Local 86, which marched on city hall in opposition to the 2018 tax, signed on.

Steve Hooper of Ethan Stowell Restaurants stood (or Zoomed) with Mosqueda as she introduced her version of the tax. It was a change for the restaurant conglomerate from 2018, when it opposed the  head tax.

“They crafted it into a place that’s a little divide and conquer within the business community, and they built a coalition of the willing,” said Hooper.

No fan of Sawant, Hooper nevertheless acknowledged that his involvement with Mosqueda’s tax efforts may have had something to do with Sawant's pressure campaign.

“Yes, harm mitigation was part of it,” he said. “Our industry would have been disproportionally hammered by the Sawant/Morales proposal.”

Sawant’s proposal would not have exempted lower-salaried employees from the payroll tax and therefore would have raised more money. She rolled it out in the months after the November election, in which progressive candidates did very well, leading Sawant to proclaim a “mandate” to “tax Amazon.”

Supporters were gathering signatures to put the question to the ballot if the city council failed to pass anything.

“The reason we were able to win this tax was not because of careful crafting of some policy behind the scenes with Ethan Stowell,” Sawant said. “It was the fact that the Ethan Stowells and the Jeff Bezoses of this world feel the movement and feel the real possibility of a ballot initiative.”

And that threat was real, Hooper said, thanks in large part to a tax that won voter approval earlier this year in the three counties near Portland, proving there was a nonzero chance voters would approve this one as well.

Although Hooper said he worked with Mosqueda to “move the needle” on taxation, by working on an alternative to the Sawant/Morales proposal “I was trying to protect our industry, for sure, from the competing proposal that I thought was incredibly harmful.”

The success of the new tax carries echoes of the $15 minimum wage debate, when Sawant ran her campaign on the issue and built pressure for its approval, but a coalition separate from hers eventually passed the law.

For Mosqueda, the path of the tax could be a precedent. The outside pressure and activism, combined with collaboration, “is exactly how I and we have been successful in the past,” she said.

Correction: An earlier version of this story stated that the vote in Oregon occurred last year. In fact, it occurred this year.