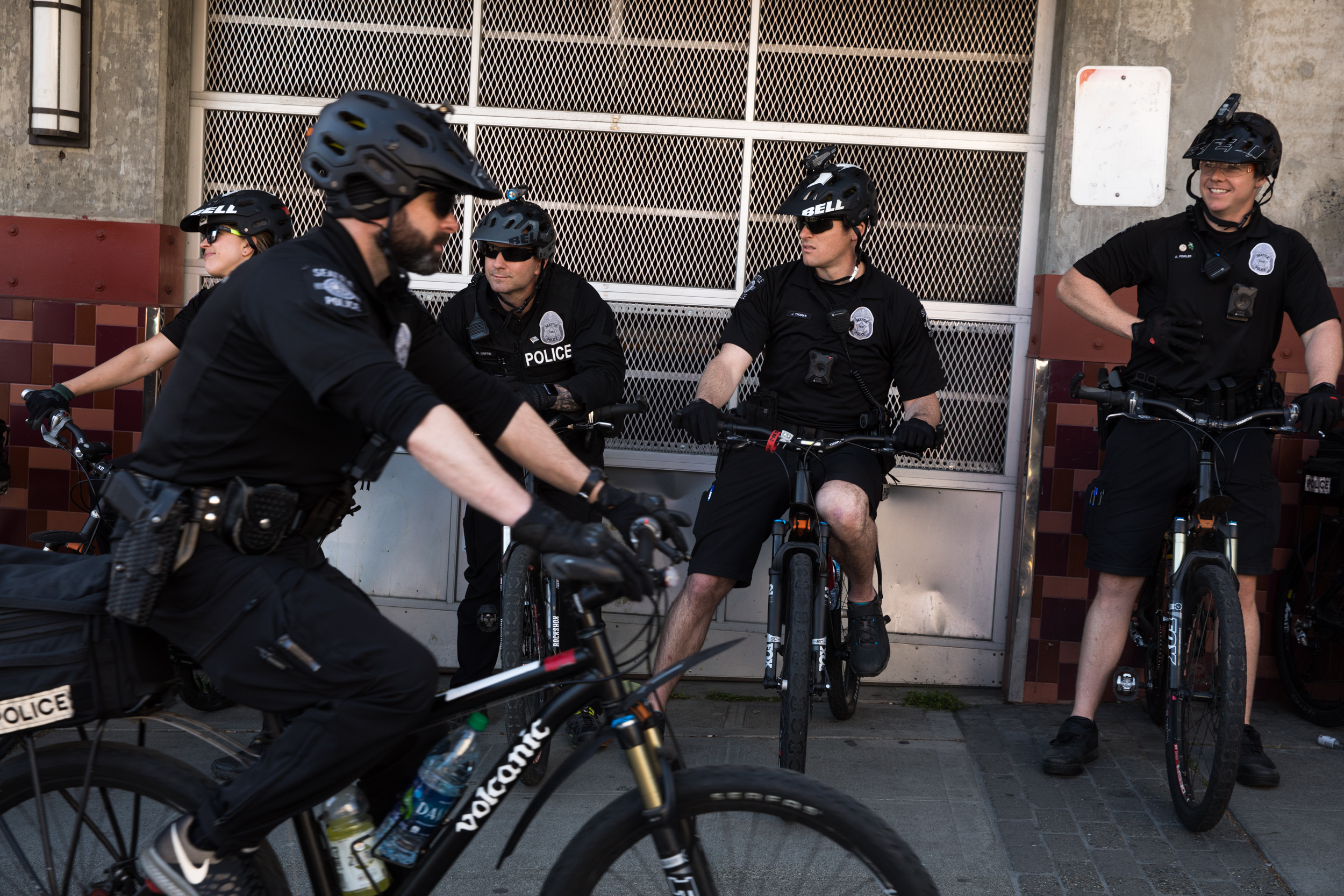 Mayor Jenny Durkan announced her plans to veto the Seattle City Council's budget that includes cuts to the police department, during a press conference, Aug. 21, 2020. The council is set to go into recess and now the two sides must figure out what to do next. (Matt M. McKnight/Crosscut)

Seattle Mayor Jenny Durkan said Friday she would veto the city council’s revised 2020 budget, including its plans to carve away the salaries of 100 full-time officers from the Seattle Police Department.

Her decision represents yet another twist in what’s become a chaotic summer in Seattle politics, defined by the economic crisis launched by the COVID-19 pandemic alongside protests that have pressured City Hall into rethinking law enforcement and public safety.

"The bills I’m vetoing were passed without the level of collaboration that I think we need and, more importantly, that the city expects of us," Durkan said in a press conference Friday. "But I am optimistic going forward that we will continue to work together to bridge the gaps."

The council, which is set to leave on a two-week recess starting Monday, passed its new budget unanimously last week. In addition to trimming the overall number of patrol officers, the council also reduced funding for the department's homelessness response team, its mounted patrol unit and, controversially, executive salaries, among other cuts. The council could, with enough support, override the mayor’s veto with a two-thirds vote within 30 business days.

However, despite what’s been an acrimonious relationship between the council and the mayor this summer, council members have shown glimmers of wanting to reconcile with the seventh floor. Council President Lorena González said in an interview she was “disappointed” by the mayor’s decision, but would work to bring the two branches of Seattle government closer together in the coming weeks.

“What I’m hearing from my constituents is that they want the city council and the mayor equally to bring the temperature down and to agree to work together on these tough policy issues, and I want to make sure that the public understands that the city council is at the ready to do that,” she said.

González said she’s been in constant communication with the mayor’s office and Durkan personally over the last seven days. The council will go on its previously scheduled recess, she said, and when they return, González said she would support a joint task force between the council and the executive that will center on the needs of those most impacted by law enforcement while also working toward an agreement between the executive and legislative bodies.

González said she still believes there is support for rethinking public safety and law enforcement. In reviewing the emails, voicemails and letters that come to her officer, “I am hearing from people that they support Black Lives Matter and the effort to restructure and transform the Seattle Police Department, but that they want us to have meaningful conversation with a cross-section of people across the city and with each other to identify the path moving forward,” she said.

Durkan continued to fault the council for what she believes were hasty moves. But, she said, "I think now everyone has settled into the fact that we know, and I think most of the council would agree, that we are expected by the people to work together."

The city was forced into the rare step of revising its 2020 budget this summer due to a more than $400 million shortfall, brought on by spending to control the coronavirus and reduced tax revenue. But the timing of those discussions aligned with the upheaval surrounding racial justice and police brutality and now the budget debate has become about much more than getting the city’s books in order.

A majority of council members have, in the past, expressed varying degrees of support for halving the department’s budget and reinvesting in community-based organizations. The movement on the council away from reforming the department and toward rebuilding has been significant and a major victory for the activists, many of whom represent communities of color, that have been pushing them in that direction. That work has not moved forward as aggressively as was initially imagined, but the cuts were, as several councilmembers said, a “down payment” on that goal.

Durkan, meanwhile, has pledged to invest $100 million in community organizations, but not necessarily at the expense of police. In this year’s budget, she proposed cutting $20 million from the department, most of which was cost-cutting in response to the pandemic. She’s also pledged to shuffle parts of the department into other corners of the city and to engage in ongoing conversations around “reimagining” the department.

She has been unwilling, however, to set specific markers for how deep cuts to the department should go and has so far not supported laying off officers.

In a statement, King County Equity Now and Decriminalize Seattle, two coalitions of organizations that have led the push to reduce police funding, called the city council's budget cuts "modest" and said members were "deeply disappointed and concerned" with the mayor's veto.

"Equitable progress is under way," the statement read. "We've experienced far too many decades of failed promises and policies that perpetuate racist outcomes. We encourage the mayor to join other city leaders in supporting the ongoing overwhelmingly-supported process to divest from policing and invest in true community safety."

Throughout the summer, the mayor and the city council have traded barbs. The mayor has accused the council of moving forward without a plan. The council, meanwhile, was particularly harsh on the mayor for how the city handled protests this summer and has accused the mayor of misrepresenting what it is they’re striving to accomplish.

The tense politics exploded last week when Police Chief Carmen Best announced she would step down, hours after the council’s vote to cut officers and her salary. Best said she was unwilling to execute the layoffs and accused the council of going after her personally.

Durkan expressed optimism that she and the council could find common ground. She said she would consider steeper cuts to the department than what she originally proposed, but that it would have to come with a clear analysis on its impacts on public safety.

The council and the mayor took a separate step toward détente on Friday, announcing an agreement on how to spend emergency and rainy day funds. The council had originally voted to run the funds down to zero and then to replenish them next year, when a new payroll tax on large businesses kicks into gear. Durkan opposed the decision, fearing the tax would underdeliver or be challenged in court, and vetoed the plan.

Under a new agreement, the council’s budget would leave about $50 million in the rainy day fund “to address the 2020 and 2021 budget shortfalls or any unplanned emergencies,” Durkan said.

The council has 30 business days from the time the mayor vetoes the budget to consider and act on its next step. City Hall will then almost immediately transition into budget talks for 2021.