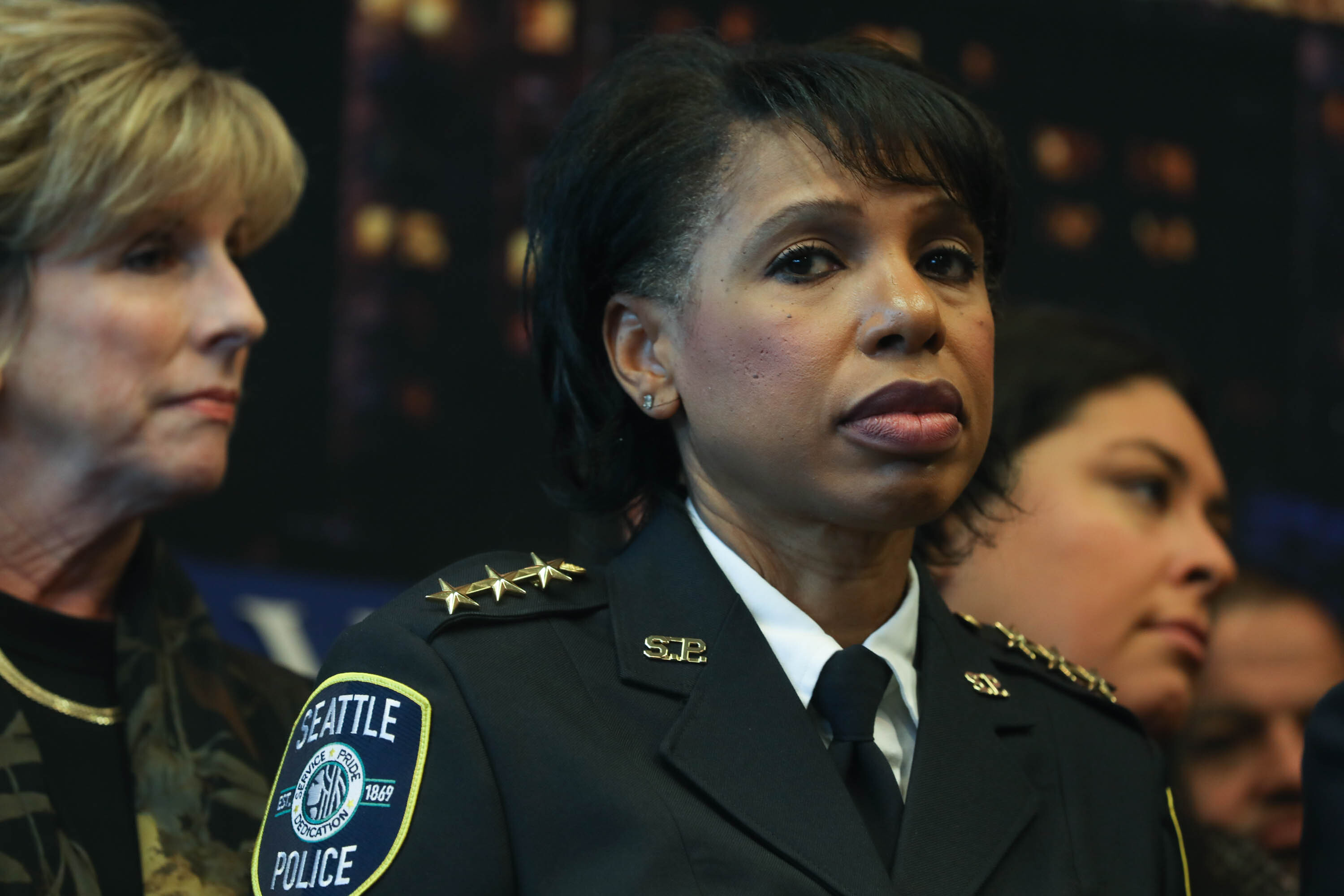 Then Deputy Chief Carmen Best stands beside former Seattle Police Chief Kathleen O’Toole during announcement of O’Toole’s resignation from Seattle Police Department, Dec. 4, 2017. Chief Carmen Best, who announced that she is retiring on Sept. 2, started her service as interim chief on Jan. 1, 2018, and was later appointed by Mayor Jenny Durkan to the position effective on Aug. 13, 2018. Best worked at the department for more than 28 years. (Matt M. McKnight/Crosscut)

Seattle Police Chief Carmen Best announced Monday night she would resign her position as the city’s top law enforcement official, effective Sept. 2, a stunning decision that comes as City Hall struggles to redefine policing at a time of protest.

“This was a difficult decision,” she said in an email message to staff, “but when it’s time, it’s time.”

Her announcement came just hours after the Seattle City Council made its first substantive cuts to the department’s budget — including to the salaries of Best and department executives — as part of its pledge to funnel money away from traditional law enforcement and toward community organizations.

In a press conference Tuesday, Best was in a remarkably positive mood, acknowledging that a weight had been lifted from her shoulders. At the same time, she expressed her anger at the direction the city is taking the police department, and said she was unwilling to follow through on laying off members of her department. The debates in City Hall had become personal, she said, and that was making her job impossible.

"At some point, every leader has to recognize when you’ve hit the point when you’re maybe not able to move the needle forward for the men and women in the organization," she said. "I really don’t want the animus that has been directed toward me to affect the people who work for me."

"It’s just time to put fresh eyes on it and a fresh perspective," she said.

Mayor Jenny Durkan, meanwhile, was emotional as she addressed Best's departure. "I will freely admit that I wish she was staying," Durkan said.

"Losing her is a deep loss for our city, and it is even more profound given where we are at this moment in history," Durkan said, her voice occasionally cracking. "She has taken on an enormously challenging job in the best of times, and she has done it in the most challenging times."

Durkan also laid into the Seattle City Council, as she's done frequently in recent days. She called the recent budgeting conversations that resulted in cuts to the department "infuriating and deeply disappointing." The uncertainty of the department's future, Durkan said, meant she would not immediately launch a search for a replacement, instead letting Assistant Chief Adrian Diaz serve as interim chief.

"If we started a search right now I don't think we could attract the candidates that Seattle deserves, because they don't know what job they're applying for,” Durkan said.

Despite the harsh words for the council, members nevertheless offered kind parting words for Best. Councilmember Alex Pedersen said he was "deeply saddened" by her exit and Councilmember Andrew Lewis offered his "deep gratitude" to Best.

Councilmember Lisa Herbold took the notable step Tuesday of apologizing to Best. “I am deeply and sincerely sorry that the Chief feels Council’s actions have been disrespectful toward individual officers and that our journey to reimagine community safety has been personally directed at her," she said.

At the same time, Herbold said it was the council's job to question the assumption that larger police departments equaled greater public safety. "We have to be able to ask hard questions about the SPD, and engage in difficult debate about the appropriate role of policing, the SPD budget, and SPD’s recent actions in response to demonstrations against violent policing here in Seattle," she said.

Best's exit marks the end of a politically rocky 18 months as the first Black woman to lead the Seattle Police Department. As a veteran of the force, Best was a well-known face within the city, and her tenure contained the hope that she’d bridge the gap between the department’s rank and file and some of the communities of color most distrustful of police.

Instead, her time as chief is more likely to be remembered for the past two months, in which police abandoned a precinct, protesters occupied six blocks on Capitol Hill and she fought bitterly with a council eager to pave a new path toward reducing the footprint of police.

"It does nothing to further our fight for authentic police accountability and the safety of Black lives, that the first Black woman to hold the position of Chief of Police of the Seattle Police Department has been forced out of her job by the Seattle City Council," the organization said in a statement. "Racism is racism."

Born in Tacoma, Best joined the Army out of college in eastern Washington. After serving in South Korea and then at Fort Lewis south of Tacoma, she entered the police academy.

Over nearly 30 years in Seattle, Best has held a range of positions, including patrol supervisor, watch commander, operations lieutenant and public information officer.

Her role in SPD leadership was solidified when former Chief Kathleen O’Toole elevated Best to deputy chief. Their marching orders, under then-Mayor Ed Murray, were to usher the city and the department through the final stages of a federal oversight agreement.

When O’Toole left, shortly before Durkan took office, Best became the interim chief and the favorite to succeed her old boss. Her long tenure and connections in Seattle, especially to the older generation in the Black community, seemed to make her a clear choice as the department continued to struggle with community confidence.

“I understand the tenets of reform and the necessary buy-in and organizational change that is needed to not only sustain reform, but to increase the benefits of reform efforts,” Best wrote in her application.

But in a surprise twist, Best was initially excluded from the list of  three finalists. The uproar, including from many community groups who seek to hold police accountable, was swift.

Days later, Best was included in the list of finalists and, eventually, chosen by Durkan to be the permanent chief.

Before protests became nightly and tense occurances in Seattle, Best had mostly stayed out of the spotlight, only occasionally encountering controversy, like when she declined to fire an officer who tracked down a Black man for “disrespecting” him.

Even as younger activists assailed her department’s response to protests, Best maintained broad support within the city’s Black community.

“I think the one good thing and the thing that we can stand behind is that Chief Best is there,” Michelle Merriweather, president and CEO of the Seattle Urban League, said in an interview earlier this summer.

The front-facing issues of her time had largely been around trying to slow the bleeding of officers from the department and dealing with homelessness and street crime.

But that was upended earlier this summer, as both Best and Durkan came under fire for their response to the street protests. The department’s use of tear gas, in particular, faced heavy criticism both from activists and members of the Seattle City Council.

In June, officers and staff made the stunning move to entirely abandon its East Precinct. What followed was the creation of the Capitol Hill Organized Protest, a six-block occupation in the heart of Capitol Hill that drew international attention, as well as scorn from President Donald Trump.

The protests eventually heated up again but the police regained control of the East Precinct and the protest zone was shut down a month later in early July.

Updates with comments from Best, Durkan and Herbold.