Five news outlets are fighting a judge’s order to turn over unpublished protest photos and video to police. 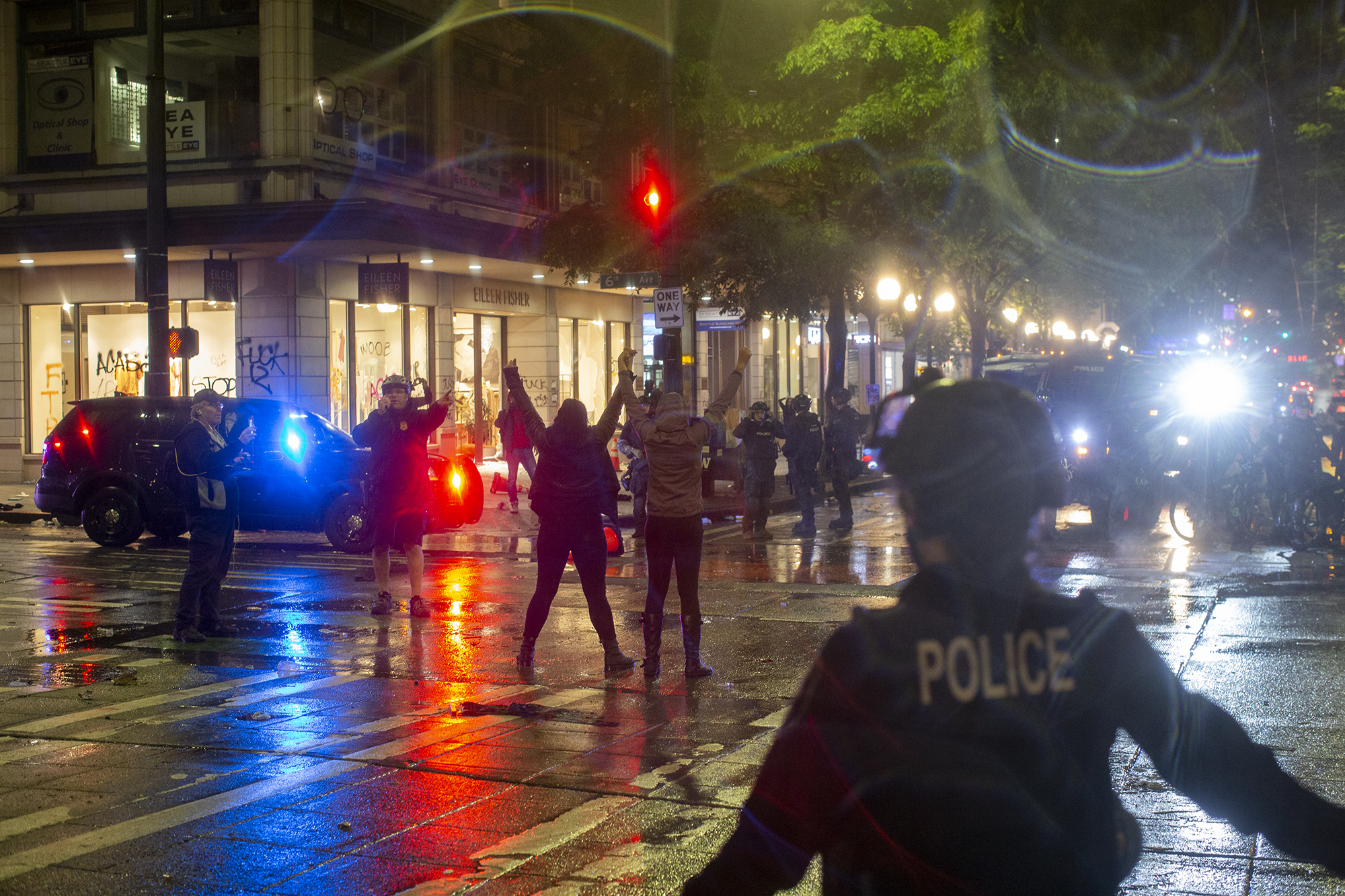 Demonstrators raise their hands and stand in a cordoned-off intersection street downtown, May 30, 2020, as Seattle Police officers regroup in the area. The Seattle Police Department has subpoenaed photos and video from five news outlets that were at the protests that day. The news outlets are fighting the subpoena. (Shaminder Dulai/Crosscut)

Katherine George worried she would go to jail — but she worried even more about losing her credibility as a journalist.

As a reporter for the Seattle Post-Intelligencer in 1995, George was ordered by a judge to testify about information she had gathered for a story.

George refused, not wanting her work to be used against someone she had quoted. She was held in contempt, narrowly avoiding jail time.

It was an experience she didn’t think other journalists should have to share.

In 2007, state legislators agreed, passing Washington's reporter shield law. In addition to generally protecting journalists from having to testify or reveal confidential sources, the law limited when journalists could be forced to turn over other materials gathered in reporting, such as unpublished notes and photos.

Five media outlets are fighting a Seattle Police Department demand that they turn over unpublished photos and video footage of protesters. The Seattle Times newspaper and local TV stations KING, KCPQ, KIRO and KOMO say complying with the SPD’s subpoena would compromise their independence, causing people to view them as de facto investigators for the police. They argue this would limit who is willing to talk to reporters, making it difficult for journalists to do their jobs.

Seattle police, meanwhile, say they need the photos and footage to help identify people who set fire to police cars and stole two police firearms during downtown protests on May 30. They say it’s in the public interest for them to review media footage that might help them locate the suspects and recover those weapons.

A King County judge recently sided with the police department. But the news organizations plan to appeal, setting up a battle over whether the 2007 shield law is being misinterpreted — or whether its protections don’t go as far as once thought.

One legislator, state Sen. Karen Keiser, D-Kent, has already suggested changing the law to better protect journalists and the public.

“I think we should look skeptically at any court or police access to unpublished materials,” Keiser said in a statement.

While Keiser, a former television journalist, tweeted last week that legislators “need to amend” the journalist shield law, she clarified this week that she would first want to wait and see the outcome of the news outlets’ appeal.

In a statement, Seattle City Attorney Pete Holmes disagreed that the police department’s subpoena endangers the independence of the press.

“I cherish the Fourth Estate and value the journalists who strive every day to make us all more informed people,” Holmes’ statement said. “They are not — and never will be  — an agency of the Government.”

At the same time, Holmes said, the two stolen firearms are “dangerous weapons” that “remain outside the custody and control of law enforcement authorities.”

So far, Holmes’ office has spent $85,000 on private lawyers representing SPD in its pursuit of the subpoena, according to a spokesperson.

Two main points are at issue: Whether the police tried everything they could to get the information from elsewhere, and whether the public’s interest in recovering the two stolen firearms outweighs the public interest in having journalists operate independently from police.

The 2007 shield law generally forbids judges from forcing journalists to turn over their unpublished work product or testify in court about aspects of their reporting.

But rare exceptions can be made if police can show that information held by the media is “highly material and relevant” to a criminal investigation.

Even then, however, police need to demonstrate several other things to compel information from the media.

One is that they have “exhausted all reasonable and available means to obtain it from alternative sources.“

Michele Earl-Hubbard, a lawyer who specializes in media and public disclosure cases, said she knows of no other case where a judge has agreed police have met that standard.

In the current case involving the SPD, attorneys for the five media outlets argued that police didn’t even do a full search of images and video available on social media before asking news outlets to turn over their work product.

King County Superior Court Judge Nelson Lee disagreed, finding that the police “reviewed a number of video[s] or photographs posted on the internet” before trying to subpoena the news outlets.

Earl-Hubbard, who is not representing the media outlets in the case, said that’s simply not good enough.

“I don’t think that’s reasonable to say, ‘I don’t have to go search YouTube,’ when my 14-year-old could go do that right now,” Earl-Hubbard said. 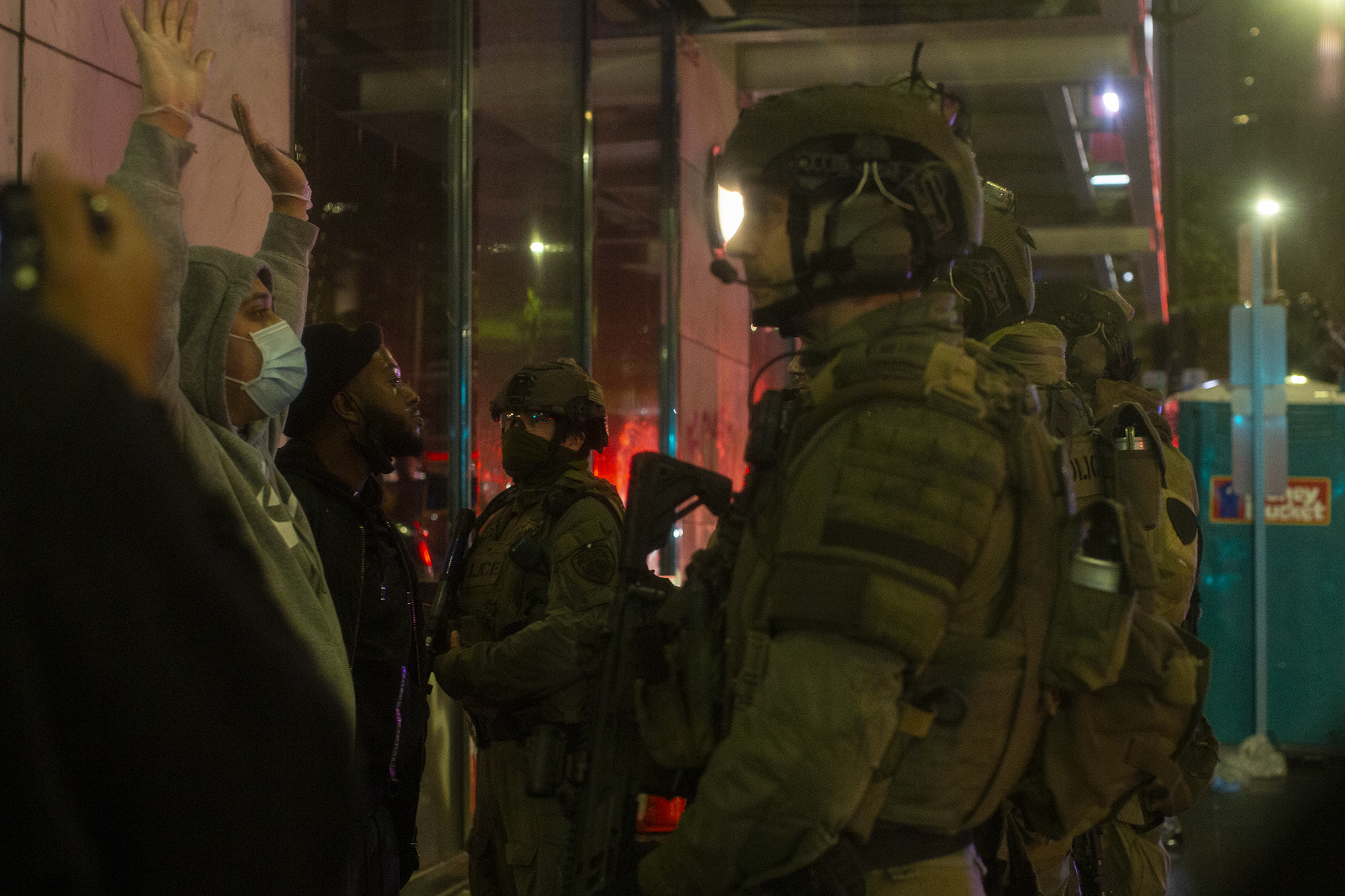 Even if police did exhaust all avenues of investigation, they still have to prove there is “a compelling public interest” in forcing the media to turn over their work, the shield law says.

Earl-Hubbard said that public-interest test is what made Washington’s law one of the strongest shield laws in the country when it was passed in 2007.

At that time, the thought was “almost nothing is going to make it past that bar,” said Earl-Hubbard, who testified in support of the measure when it was moving through the Legislature.

She said an unsolved murder where a journalist was truly the only witness to the crime might meet the standard, but an arson or gun theft committed during a heavily photographed protest most likely does not.

“There is an incredible public interest in the press being seen as independent, and not a tool for one government agency or another,” Earl-Hubbard said. “There is usually far less compelling interest in the specific crime and the specific piece of evidence, especially when there are other ways to get the material.”

Leaders of public media organizations across the state, including Crosscut, have also expressed concern about the judge's ruling.

A few other states, including Oregon and Nevada, provide even greater protection than Washington does for reporters’ unpublished work. Those states provide an “absolute privilege” for those materials, making it almost impossible for a judge to force journalists to turn them over for any reason.

“If you’ve got general news footage of an event, and it happens to pick up someone committing an assault, for example, there isn’t really a strong public policy ground for not turning it over,” said McKenna, a Republican who pushed for the passage of the shield law when he was in office.

McKenna said the primary goal of the journalist shield law was to protect confidential sources — people who share information with the news media with the expectation their identities won’t be revealed. Washington’s shield law provides an absolute privilege for those types of sources, preventing journalists from having to reveal them under virtually any circumstance.

That was an issue on legislators’ minds in the mid-2000s, after former New York Times reporter Judith Miller spent 85 days in jail in Virginia for refusing to testify about her conversations with a confidential source. That was in 2005.

Then, in 2006, two San Francisco Chronicle journalists were also ordered to spend time in jail after they wouldn’t testify about the person who leaked them grand jury testimony during their reporting on elite athletes’ use of steroids.

But George, the former journalist at the Post-Intelligencer, said reporters’ credibility is at stake even when they are asked to testify about a source who talks to them on the record, without an expectation of confidentiality.

That was the situation she found herself in back in 1995.

“Really, what I was concerned about was the chilling effect on sources,” George said about her decision not to testify. “Who’s going to talk to a reporter if that reporter then turns around and gets that person in trouble? And that’s what would have happened.”

Increasingly, journalists also have reason to fear for their physical safety when covering events like protests, said Madeline Lamo, a media litigation fellow with the Reporters Committee for Freedom of the Press. Forcing journalists to give their work to police would make them less welcome and increase those risks, Lamo said.

According to statistics analyzed by Lamo's organization, protests have consistently been the most dangerous on-the-job sites for journalists working in the United States in the past three years.

Lamo said much of that violence comes from police committing acts of violence against journalists, but sometimes protesters also lash out.

Danny Gawlowski, an assistant managing editor at The Seattle Times, said in a court filing that during the recent Seattle protests, a news photographer was hit in the head with a rock thrown by protesters. The photographer was wearing a helmet at the time, preventing serious injury. In a separate incident, the same photographer was punched in the face by a protester, Gawlowski said.

So far, there haven’t been any published court decisions interpreting how Washington’s shield law applies during criminal investigations, according to an amicus brief filed by the Reporters Committee For the Freedom of the Press.

That would change if the Seattle news outlets’ case ends up going to the state Court of Appeals or the state Supreme Court.

For now, Judge Lee has amended his order regarding SPD’s subpoena. The court now will privately review the news outlets’ photos and video footage to determine their relevance before releasing them to the police.

The media outlets still plan to appeal, saying that, even with that concession, Lee’s order compromises their independence. 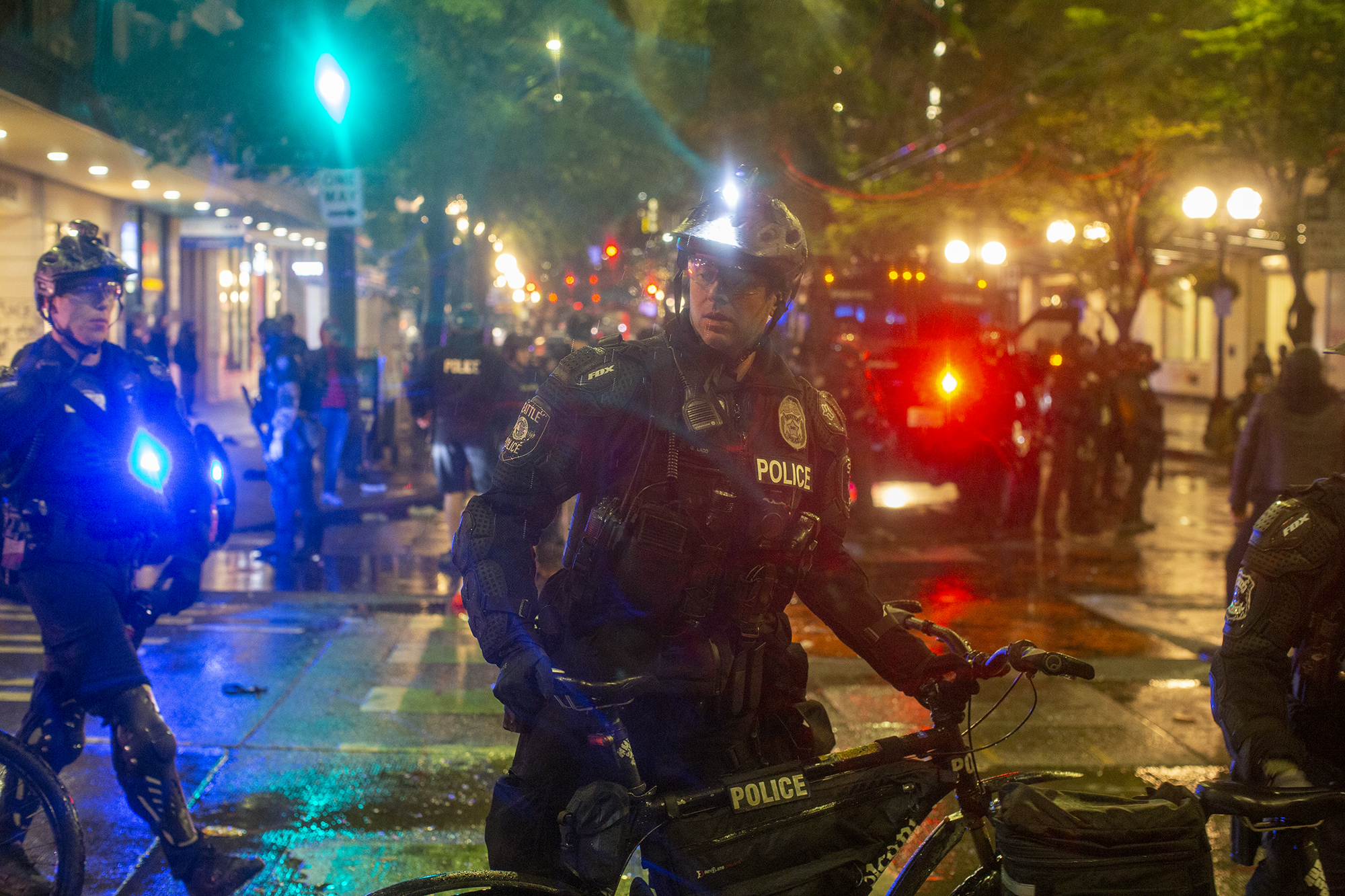 Following protests against systemic issues with policing in America, which have been mostly peaceful with smaller bursts of violence and vandalism, the Seattle Police Department asked local media to turn over unpublished images and video to investigators. Local media outlets have refused. (Shaminder Dulai/Crosscut)

Following protests against systemic issues with policing in America, which have been mostly peaceful with smaller bursts of violence and vandalism, the Seattle Police Department asked local media to turn over unpublished images and video to investigators. Local media outlets have refused. (Shaminder Dulai/Crosscut)