Fewer riders and lower fare collection are just part of the financial challenge for transportation during the pandemic. 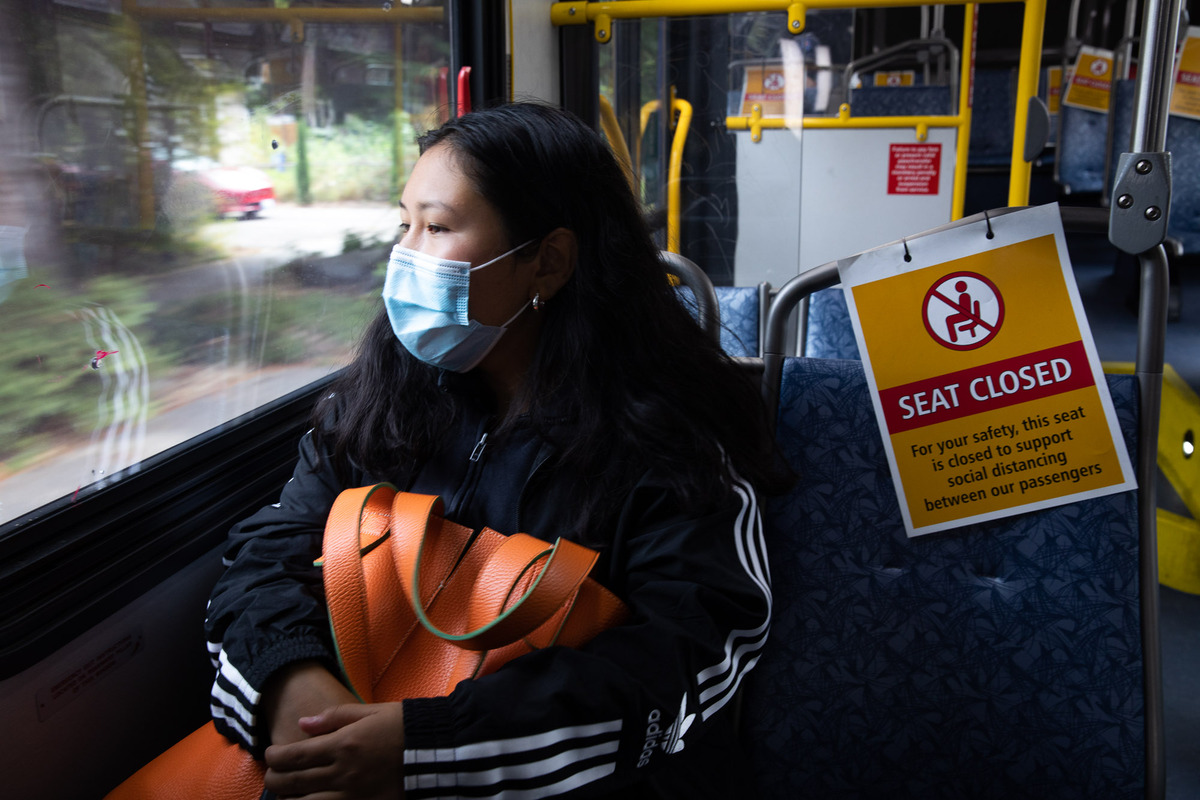 Alina Taylor, an undergraduate at Seattle University, travels from Phinney Ridge to West Seattle's High Point neighborhood and back for her summer work with AmeriCorps, where she is assigned to Seattle Housing Authority and the City of Seattle's Children and Youth Summer Food Program. Photographed on August 20, 2020. (Matt M. McKnight/Crosscut)

When Philip Weiss left behind his career as a software developer to try his hand at genealogy, he realized he had to cut living expenses. So last year, before COVID-19 drastically changed the lives of Seattleites, the 50-year-old gave up his car and decided to rely on public transportation instead. Today, the Eastlake resident takes the bus everywhere, from the grocery store to follow-up doctor appointments related to his cancer diagnosis.

He says he feels relatively safe doing so.

“I’m not worried about buses being dirty or COVID infected,” Weiss said, although “there are always one or two people on the bus very clearly not wearing a mask.” The worst experience he’s had on a bus in the midst of the pandemic was when a maskless passenger insisted on sitting next to him. The vast majority of passengers not only comply with the mask requirement but try to practice social distancing, too.

Despite coronavirus, hundreds of thousands of people living in King County continue to rely on buses, light rail, ferries and other modes of public transportation to get around.

“There's still a whole lot of people who are counting on transit as a lifeline,” said Alex Hudson, executive director of the Transportation Choices Coalition. “People know transit is important, and they know that their neighbors are counting on it.” Hudson said mass transit remains especially vital for communities of color who have been priced out of Seattle.

Ridership, however, is down roughly 80 percent on light rail and express buses, according to John Gallagher, a public information officer with Sound Transit. King County Metro, meanwhile, is transporting about 140,000 passengers a day, approximately 37 percent of its pre-COVID ridership, said Jeff Switzer, a spokesman for the agency. In addition to lost fare revenue because of COVID, local public transportation agencies are also struggling financially because sales and other tax collections that help fund operations have decreased.

While big tech companies such as Amazon have given employees permission to work from home until early next year, transit officials believe ridership will start rebounding this fall as more of the public returns to work, especially since public health officials have determined buses and trains aren’t superspreaders of the virus or as dangerous as once thought. According to the Washington State Department of Health, there have been 14 total COVID outbreaks related to transportation, shipping and delivery.

“It is all about mitigating risks,” said Jared Baeten, vice dean of the University of Washington School of Public Health. “Mask mandates and spaced seating are key — those both drop exposure risk substantially.”

Gallagher said the ventilation system on Link light rail is similar to that of New York City subways, which have been shown to effectively remove droplets from the air where the virus can linger. Sound Transit plans to increase service on Link light rail next month: Trains will run every eight minutes during peak hours on weekdays. The agency will run trains every 15 minutes on weekends and off peak on weekdays, and every 30 minutes in the evenings. Sound Transit expects to maintain this level of service until March of next year. Prior to the pandemic, trains ran every six minutes during rush hour, Gallagher said. 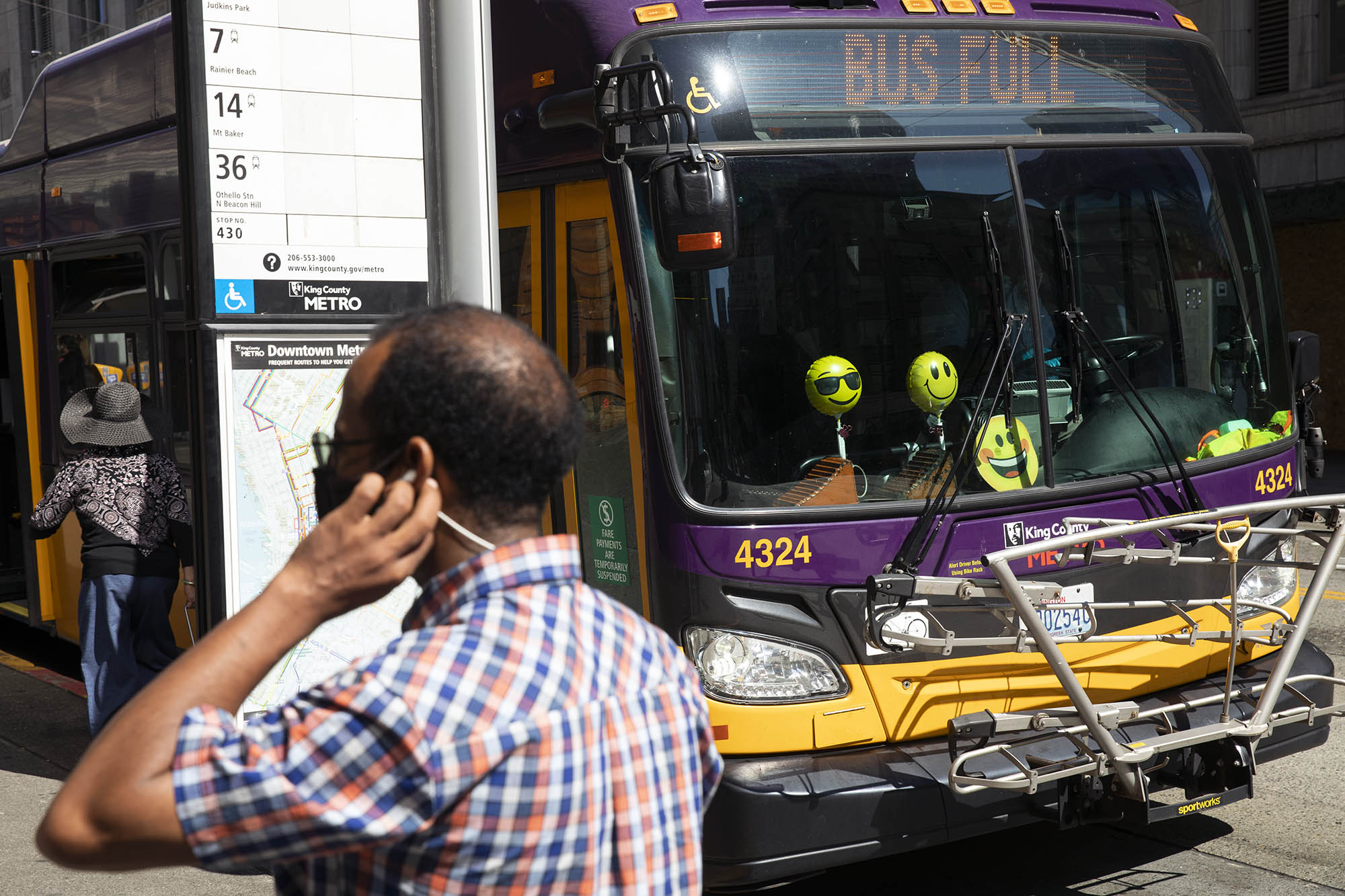 King County Metro, meanwhile, has a layered approach to limit the spread of COVID and make riding transit as safe as possible, including daily disinfecting, HVAC systems that work to filter particles, and requiring face masks. In addition, ridership on buses is limited to between 12 and 18 people, depending on the size of the bus, to allow for social distancing.

Daniel Heppner, 22, an electrical engineer living in Green Lake, takes the bus to commute to his office downtown a couple times a week, even though he has access to a car. “I still would always prefer to take the bus,” Heppner said, because he has always hated having to look for parking.

“I don’t think people should be afraid of transit,” he added. “It’s not any less important than it was before.”

But Ken Price, president of the Amalgamated Transit Union Local 587, which represents Metro drivers, said the lack of enforcement with regard to wearing face masks remains a concern among bus and train operators.

“That’s been weighing on us quite a bit lately,” Price said, although he added that a plastic safety shield, what he referred to as a sneeze shield, separating drivers from passengers, will be installed on buses beginning next month.

Price said out of approximately 3,100 drivers, two have died after contracting COVID-19 and about 30 have been infected, although it is unclear exactly how or where the employees contracted the virus.

At the same time, Price said he’s afraid the cuts that have already been made to transit service might ultimately dissuade riders from using public transportation again. Metro is currently operating about 85% of its pre-COVID weekday trips. Because of the cuts, 200 part-time drivers have been laid off, although some have been temporarily put back to work.

Katie Wilson of the Transit Riders Union, which advocates for the wide use of public transportation in the region, said more people working from home because of the pandemic is a positive development from a climate perspective, but “it’s the switch back to driving that would be especially worrying.”

Referring to the cuts to transit service, Wilson said: “Now your whole trip is way more of a hassle. Why get into the habit again?”

Riders, advocates and transit officials are all concerned about sustaining the system while the tax revenues that support public transportation, plus fare collection, are both down dramatically because of the pandemic. For example, King County estimates that there will be $200 million less in sales tax collections in 2020 alone. 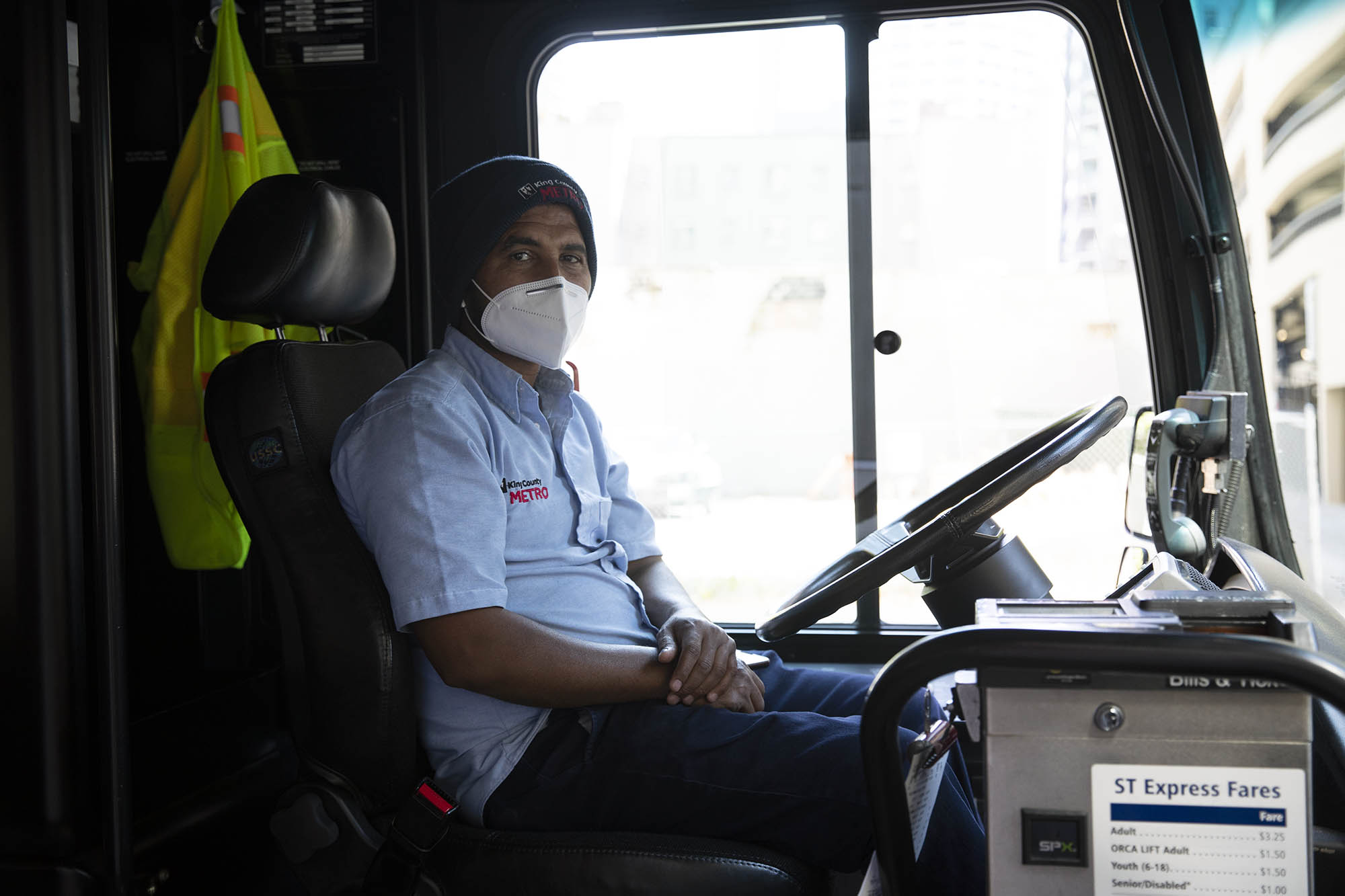 King County Metro also estimates it will lose $80 million or more this year because of the temporary suspension of fare collections. The decision to forgo collections was driven by a concern for drivers and the desire to shift the majority of boardings to the rear doors. Sound Transit, however, is continuing to collect fares from passengers during this time, although fare collection was suspended from March to June.

White also said the county needs to develop a less volatile funding model than sales tax, which can drop significantly during economic downturns. White cited the vehicle-miles-traveled tax being considered by some in Congress as one possibility.

Despite the financial assistance, transit agencies across the country are calling for additional help from the federal government.

In addition to daily operations, the pandemic has put some of Sound Transit’s long-term projects, such as new light rail stations, in jeopardy.

“With greatly depleted revenues, Sound Transit will not be able to deliver many expansion projects on their original timelines unless we receive alternative revenue from federal or state sources,” Gallagher said.

The Sound Transit Board of Directors is working to determine which projects might be delayed, although construction underway or plans already under contract, such as the new Northgate light rail station, are expected to move forward.

Claudia Balducci, a transportation leader on the King County Council, who also serves as chair of the Sound Transit Board’s System Expansion Committee, said these projects remain a priority because the pandemic hasn’t changed the desire for more public transportation.

“Even post COVID, you’re going to have the need for a fast, frequent, reliable transit system,” said Balducci, adding that she, too, worries about delays in construction and funding.

“We’re in uncharted waters, and we’re probably going to have to adjust as we go forward,” she said. 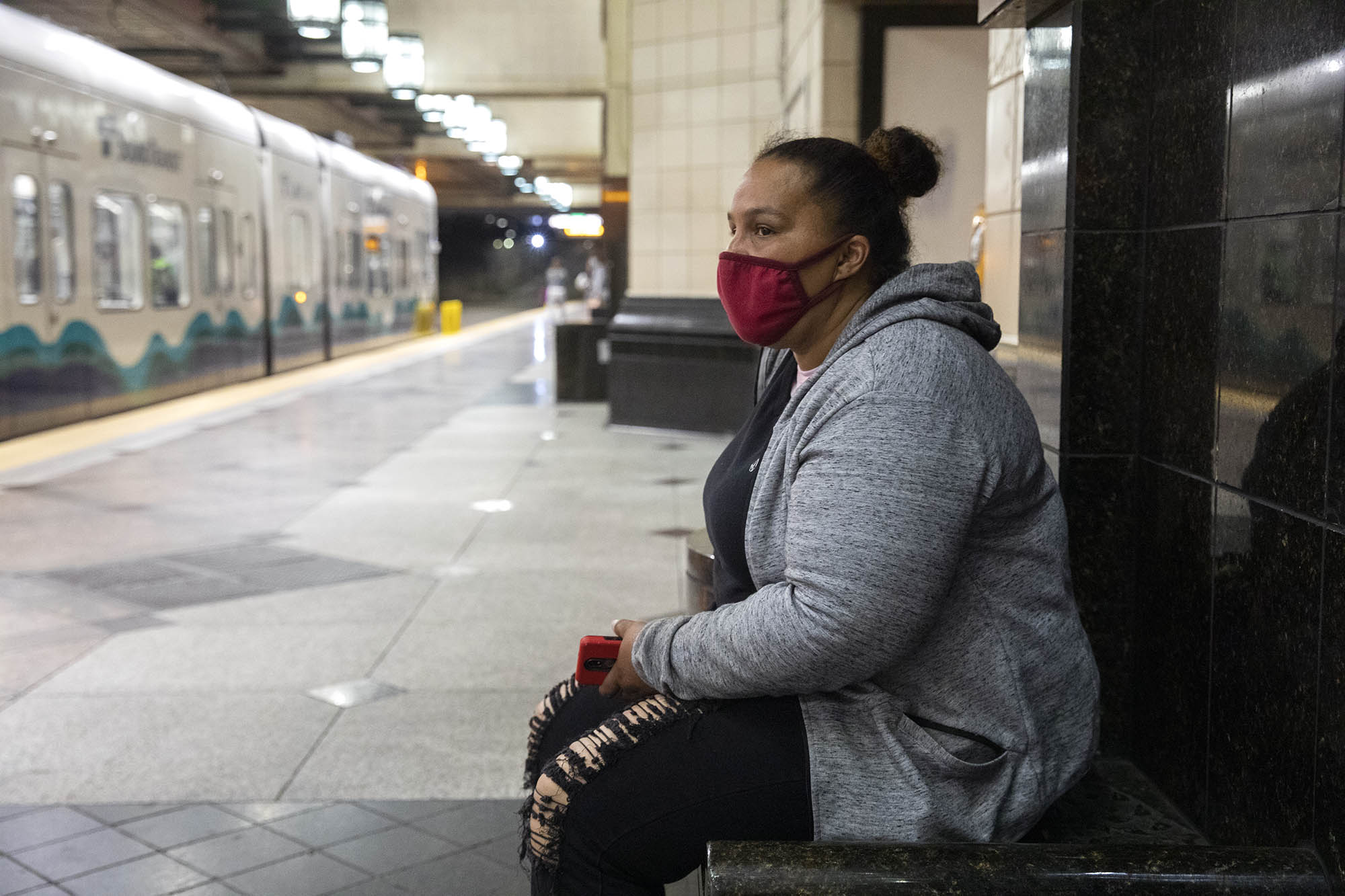 TaSaunya Hawkins, a former heroin addict, uses public transportation to get to and from a methadone clinic on August 14, 2020. (Matt M. McKnight/Crosscut)

TaSaunya Hawkins, a former heroin addict, uses public transportation to get to and from a methadone clinic on August 14, 2020. (Matt M. McKnight/Crosscut)

In November, Seattle residents will vote on renewing a city tax known as the Seattle Transportation Benefit District. If approved, the ballot measure would replace an existing  .1% sales tax and a $60 car-tab tax, with a .15% sales tax. The six-year measure is expected to raise about $42 million a year for Metro bus service but that’s less than the $56 million a year raised last year under the current tax.

Alex Pedersen, chair of transportation for the Seattle City Council, said he thinks the sales tax on the November ballot is ample for current ridership, but that if needed the city council could collaborate with King County for some supplemental funding for transit.

Justin D. Leighton, executive director of the Washington State Transit Association, said the state should also look into contributing more than just 2.4 percent of its budget to transit.

While the transit budget worries drag on, public transportation users like Alina Taylor continue to be grateful for the options that are currently available. For Taylor, a 20-year-old college student with a summer job with AmeriCorps, a program that provides service opportunities in exchange for a stipend, owning a car is cost prohibitive. Her two-hour, daily bus commute from Phinney Ridge to West Seattle and back is necessary to deliver pre-packaged meals at parks to parents and children most in need.

Taylor says the buses seem quieter than usual, and people tend to keep to themselves more. Because of the pandemic, she would rather drive right now and feel less exposed.

“But aside from COVID, I actually enjoy the freedom of not being responsible for car expenses, and I hope that Seattle becomes easier to navigate for people without cars,” Taylor said. "I hope that the fear of public transportation does not outlast the virus and make car culture even stronger.”

This story was updated to add information about Claudia Balducci.