Transportation, parks and utilities take major hits as the mayor’s budget faces controversy over whose needs will be prioritized. 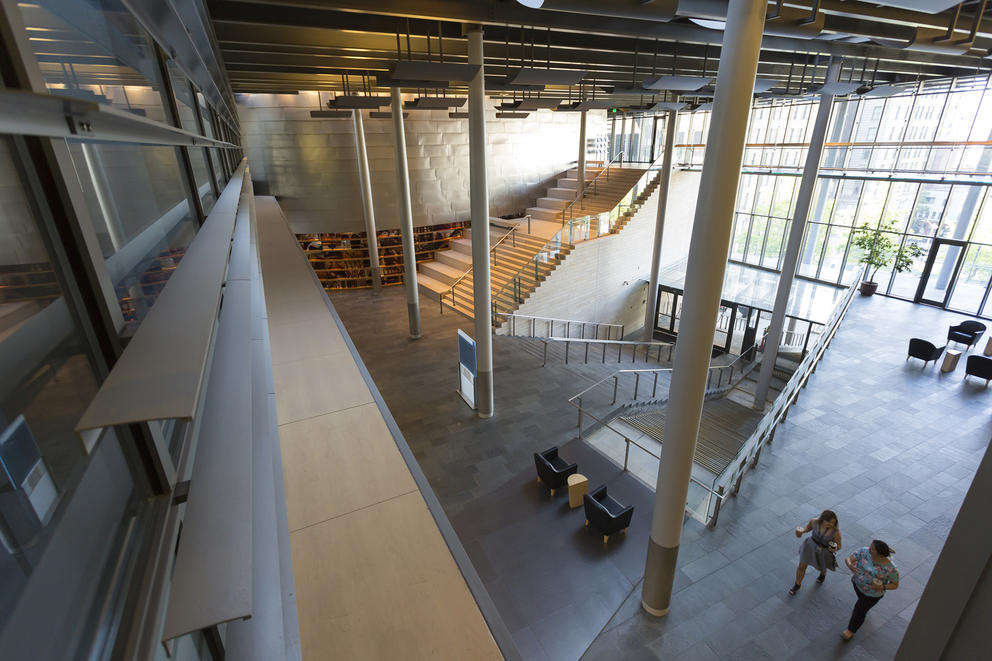 Employees get coffee in the main lobby of Seattle City Hall on June 12, 2019. (Paul Christian Gordon for Crosscut)

Against a backdrop of plummeting tax revenue, increased emergency expenses and demands to invest in communities that have long seen underinvestment, Mayor Jenny Durkan proposed her 2021 budget Tuesday.

At $6.5 billion, the proposed budget confirms the official, if not surprising, end to a decade of growth in City Hall — the result of the economic devastation spurred by the COVID-19 pandemic. The tax sources that usually feed the city’s general fund have been decimated, down by nearly $200 million from what was predicted last year. Budgets for transportation, parks and utilities are taking major hits totaling many millions of dollars, the result of a society transformed from a year ago.

A new payroll tax — approved by the Seattle City Council without the mayor’s support — will likely cover a large portion of the city’s budget deficit. Speaking to reporters Tuesday, the mayor echoed that it was not her preferred funding mechanism, but that the money would go toward shoring up the general fund and increasing COVID-19-related expenses. Charting the exact path of tax dollars through the city’s coffers can be opaque.

Still, the declining revenue, combined with commitments to spend heavily on underserved communities, homelessness and the city’s COVID-19 response, mean that Durkan’s proposal carves away over $60 million from the city’s general fund expenses and more from the utility, transportation and parks departments. Capital projects are likely to be delayed, hiring and wages inside the city frozen, community centers shuttered and some limited number of workers laid off.

“This budget was a difficult budget for us to do,” Durkan said Tuesday.

The bad news budget arrives as the country and Seattle reckon with the past, particularly as it relates to race, policing and public safety. Durkan committed early in the summer’s protests to invest $100 million in underserved communities. Her budget promised to follow through by moving money around inside the city’s general fund. The mayor has said she wants those investments to continue each year for the next 10 years, but did not say how the city would pay for them beyond 2021.

How that money will go out the door next year remains unclear: Her budget so far has not committed those dollars to any particular organization. Who will decide where that money is allocated is also unclear.

One result of the protests is the birth of an organized pressure campaign from community advocates, many representing members of the Black community. It was their activism that led to initial cuts to the Seattle Police Department in the revised 2020 budget.

Now, those groups are pushing for direct involvement in the new investments in community organizations. On Monday, one coalition, King County Equity Now, laid out a community research project and its initial plans for a highly involved “participatory budgeting” process for proposing how the city’s money should be spent.

Even before Durkan released her budget, it was subjected to scrutiny and controversy. She has promised a task force to allocate the community funding, but at least one prospective member, Sean Goode, executive director of the restorative justice organization Choose 180, backed out amid community concerns.

His biggest issue: That the investments in community will not come from redirecting money in the police budget. “The mayor refuses to contemplate serious cuts to the city’s bloated policing budget, leaving BIPOC [Black, Indigenous and people of color] communities to fight each other for $100 million while SPD receives that amount nearly four times over,” he wrote in an op-ed published Sunday by the South Seattle Emerald.

At the same time, some advocates fear a mayoral task force will only have the trappings of community involvement without the substance. “We oppose a Mayor-driven task force with hand-picked, appointed members, as it does not reflect a community-designed and driven democratic process,” said a statement signed by 35 service and advocacy organizations in Seattle.

Durkan so far has not proposed paradigm-shifting changes to the Seattle Police Department, at least not immediately. In her budget, there would be cuts to police staff through attrition — about $22 million worth — and a restructuring of the 911 and emergency management functions. But where some advocates have pushed for using up to 50% of the department’s budget for investing in community, Durkan’s plan splits the work of community investment and rebuilding policing into two, parallel tracks.

Durkan said she will convene a team of people to conduct analyses of the department — including minimum staffing levels and alternatives to 911 — and did not close off the idea of future reductions. The approach, Durkan said, will be to determine “what is the role of police and what is the ideal number we need and then we fund that number.”

This was all true in 2020 as well. But where federal and state investments helped buoy the city this year, those dollars have not arrived for 2021. The city has spent down much of its rainy day and emergency funds and will spend nearly the rest of it in 2021.

Were it not for increased spending, the city could possibly come close to treading water with its new payroll tax. But in addition to the $100 million in new community investments, the mayor has promised a continued increase in dollars for the city’s COVID-19 response and homelessness, pointing to the priorities as evidence that her proposal is not an “austerity budget,” as some critics have worried about.

That said, there will be significant reductions. Pay increases for nonunion employees, including managers and executives, will be frozen. Vacant positions will go unfilled. And, Durkan said, they’re likely to proceed with about 40 layoffs.

Revenue from a voter-approved tax for libraries will go toward maintaining service instead of expanding it. And the parks department will operate with fewer parks facilities and services.

The transportation department is facing an astounding $85 million budget gap, due to drops in real estate and gas taxes and transportation revenue. It would cover the gap through interdepartmental loans and pauses on things like new paving, pedestrian and bike infrastructure, and a new heavy haul network. The downtown streetcar would be deferred.

The council's reaction was muted, as its members were just seeing the budget for the first time. But Councilmember Alex Pedersen said that what he'd seen so far was “solid.” He also expressed concerns that only nonunion salaries were being frozen and believed the city should pause raises across the board. “We’ve known about the deficit for a long time and we’ve known that this is an unprecedented challenge fiscally,” he said.

Councilmember Tammy Morales said she wants to figure out how much of the promised $100 million community investment can come from the Seattle Police Department's budget. “That’s going to be my first look is, what does that mean for the police budget?” she said. "Can we find $100M in 2021? I don’t know the answer to that.”

The mayor’s budget proposal offers some faint glimmers of hope. The city is forecasting that the picture will improve later next year. And the budget does not assume any new federal or state money, meaning if Congress does send some money to Seattle, the budget picture would improve considerably.

“We will be in a period of difficulty for some time,” Durkan said. “2020 has just been an awful year, for everybody all around. But we are now through, I think, the worst of the uncertainty. … This is a budget that makes tough choices, but coming out of this budget in the middle to third quarter of next year we’re going to be very well positioned to be one of the strongest cities coming out of COVID-19.”