Communities around the world are betting that “complementary currency” can get them through the economic downturn. Many are looking to a small Washington town for guidance. 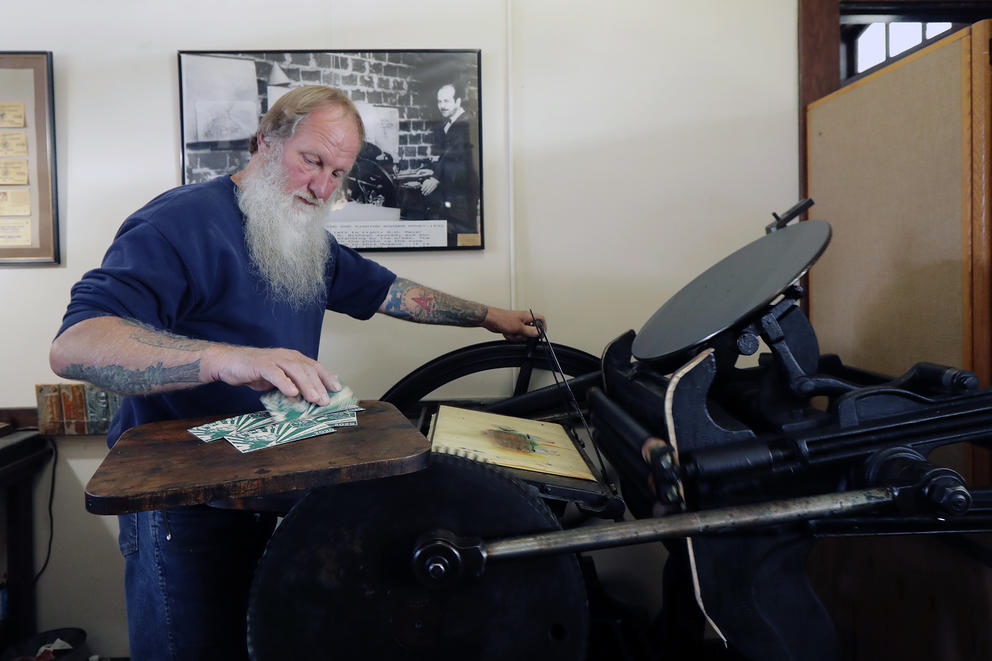 In this May 21, 2020, photo, Loren Ackerman prints wooden money on an 1890s-era press in the town of Tenino. In an effort to help residents and local merchants alike get through the economic fallout of the coronavirus pandemic, the small Thurston County town has issued wooden currency for residents to spend at local businesses, decades after it created a similar program during the Great Depression. (Ted S. Warren/AP)

In a back room of the Tenino Depot Museum, a modest sandstone building in a city of fewer than 2,000 people just south of Olympia, there is a rickety old machine that officials believe could help save the community from looming economic collapse: With it, money is literally being made from trees.

Printed on postcard-sized sheets of planed maple veneer by Tenino’s only resident expert using an antique 1890 Chandler & Price letterpress, these “wooden dollars” are being handed out to locals suffering financial hardship. Pegged at the rate of real U.S. dollars, the currency can be spent everywhere from grocery stores to gas stations and child care centers, whose owners can later exchange them.

“We want this to be a symbol of hope,” says Tenino’s mayor, Wayne Fournier, of the City Hall-funded program. “We preach localism and investing in our local community, and the idea with this scheme is that we’ll stand together as a community and provide relief to individuals that need it while fueling consumption. It’s in our city’s DNA.”

Indeed, the wooden currency is a reboot of a Tenino program that dates back to the darkest days of the Great Depression. The logging city’s only bank at the time had closed, and local businessmen decided to establish a wood-based scrip to allow commerce to continue. Tenino’s 1931 program was the first of its kind in the U.S.

“It worked perfectly,” says Fournier, whose new scheme offers Tenino residents who demonstrate they are experiencing economic difficulties caused by the pandemic a stipend of up to $300 a month in wooden dollars.

Since the currency's launch in May, cities in states from Arizona to Montana and California have contacted Tenino for advice about starting their own local currencies. “We have no idea what is going to happen next in 2020,” adds Fournier. “But cities like ours need to come up with niche ways to be sustainable without relying on the larger world.”

Such so-called complementary currencies — a broad term for a galaxy of local alternatives to national currencies — have been around for centuries; according to research published in the journal Papers in Political Economy in 2018, 3,500 to 4,500 such systems have been recorded in more than 50 countries across the world. Typically they are localized currency that can be exchanged only among people and businesses within a region, town or even a single neighborhood. Many are membership programs limited to those who have signed up for the scheme; they typically work in conjunction with rather than replace the official national currency.

They take many different forms. Relatively few are based on paper money; many are now purely digital or are exchanged via smart cards. Their goals also can span multiple economic, social and environmental objectives. Some complementary currencies aim to protect local independent businesses. Some promote more equal and sustainable visions of society. Others have been founded in response to economic crises when traditional financial systems have ground to a halt. As the coronavirus pandemic brings on a wave of social and economic tumult, all three challenges appear to be in play at once.

“In times of crisis like the one we are jumping into, the main issue is lack of liquidity, even when there is work to be done, people to do it, and demand for it,” says Paolo Dini, an associate professorial research fellow at the London School of Economics and one of the world’s foremost experts on complementary currencies. “It’s often a cash flow problem. Therefore, any device or instrument that saves liquidity helps.”

Although it is still too early to measure the full economic impact of COVID-19, the historic 33% GDP drop in the U.S. in the second quarter of 2020 offers a sense of why Great Depression comparisons keep coming up. The International Monetary Fund has said the ongoing crisis could knock $9 trillion off global GDP over the next two years, the worst downturn since the 1930s.

For local money boosters, this all adds up to a golden opportunity for a complementary currency resurgence. “The era of the regular economy being prosperous is coming to an end,” says Stephen DeMeulenaere. The technology lead of the Netherlands-based Qoin Foundation, a nonprofit that advocates for community currencies, he argues that the failures of global capitalism, exacerbated by the coronavirus pandemic, make a stronger case for local money now. “There’s a structural failing in the way money is being introduced, through policies like quantitative easing,” he said. “Simply printing more money does not mean that it will circulate. If someone is having a heart attack, do you give them a blood transfusion, or CPR?”

Like Tenino’s wooden dollars, Switzerland’s WIR was rolled out in reaction to the scarcity of money. Created in 1934, it’s now the world’s longest-running complementary currency. WIR offers loans to small and midsized businesses for transactions with other businesses that accept WIR francs, which are pegged to the value of the Swiss franc. It currently boasts more than 60,000 members — including a fifth of all Swiss businesses. “WIR is based on a strong network, which is more important than ever,” says Volker Strohm, a spokesperson.

Often these programs emerge when mainstream economies contract, as happened in Argentina in the early 2000s or Greece last decade, and this mutual exchange has evolved into another kind of currency, known as a mutual credit network. Boosters of complementary currencies say that, when combined with government funding, they can also be an effective way of keeping dollars flowing within a community, and, by eliminating capital flight, they create a powerful multiplier effect.

In addition to encouraging people to shop locally, complementary currencies can incentivize positive patterns of behavior.

As in Tenino, the Brazilian city of Maricá, in Rio de Janeiro state, combines a local currency with a basic income program. About 80,000 residents, nearly half of the population, receive 130 reais ($35) each per month, without any conditions about how they can spend the money. Launched in 2014, the money is distributed in “Mumbuca,” the city’s local currency, which is not accepted in the rest of Brazil.

“This can become a model on how a city can efficiently disburse social benefits during the pandemic, supporting poor families while they stay at home and also small business during the crisis,” says Eduardo Diniz, professor of banking and technology at the São Paulo School of Business Administration, who has been researching public policies using community currencies since 2014.

In May 2020, Maricá residents spent 30 million reais worth of Mumbuca, according to Diniz. The key to the success of Mumbuca has been strong participation of local government. “Historically, it was a very poor city,” says Diniz. “The decision to invest this money through the currency means they have been able to build schools and hospitals with it. The same money is passed through the economy again and again.”

Other research has demonstrated the value of keeping cash flowing close to home: One study in Canada showed that independent retailers recirculate 2.6 times more money into their communities than into chains. In addition to encouraging people to shop locally, complementary currencies can incentivize positive or philanthropic patterns of behavior.

Inspired by blockchain technology, England’s northern city of Hull created the world’s first digital-only local currency in 2018, providing discounts of up to 50% on goods and services for those that did voluntary work with local organizations. A similar Dutch project, Samen Doen, rewards those who carry out socially beneficial activities such as caring for the elderly.

The Bristol Pound, founded in 2012, has come to be considered one of the most influential complementary currencies: Residents of the U.K. city can use the local bills to pay for a bus ride, a cup of coffee or even their taxes. However, despite the £5 billion ($6.5 billion) worth of Bristol Pounds spent since 2012, its economic impact on the region remains in dispute. A 2017 study concluded that it had not driven localization because the availability of British pound sterling made it too easy to switch out of Bristol Pounds. Such easily convertible currencies means that there is “financial leakage from local regions into global circuits,” the researchers concluded.

One problem that has troubled some complementary currencies is finding a suitable way to cover operating costs. The WIR solves this via a transaction fee — 0.06% for members and double for nonmembers — paid in Swiss francs, plus interest on loans taken out in WIR. Canada’s Calgary Dollar funds itself by paying its employees partly in Calgary Dollars, as well as receiving fees from government and businesses.

Several U.S. community-based currencies have struggled to overcome this challenge, among others. Philadelphia’s Equal Dollar, which pays locals in exchange for goods, services and labor, shuttered in 2014 after a 19-year run because of the annual $300,000 cost of maintaining the program. Founded in 1991, the Ithaca HOURS program was once the longest-running regional currency in the U.S.; it faded after two decades, not long after founder and local-money activist Paul Glover moved away from the upstate New York college town.

Limited uptake among businesses has also proved to be a stumbling block for other defunct programs: The local value exchange system LOVES, based in Yamato, Japan, paid residents in local currency for volunteering and bringing their own bags to the supermarket. Though many residents signed up, not enough shops participated, and the 5-year-old program ceased in 2007.

The slow fade of physical cash as e-commerce and electronic payments take over is yet another factor that can bring down alternative currencies. Diana Finch, managing director of the Bristol Pound, says that even before coronavirus hit, the circulation of paper money in the area dropped by about 60%. “The purpose of the Bristol Pound was to encourage independent businesses to create a vibrant economy based on a diversity of smaller human-scale businesses,” she says. “But we were limiting ourselves and couldn’t achieve high enough scale.”

To say afloat, the Bristol Pound is now shifting toward a business model based on electronic transaction charges known as Bristol Pay, set to launch later this year. The goal of Bristol Pay will be to capture 50% to 80% of the transactions in the city, a small fee charged for each, with earnings then invested into social and environmental projects.

As an uncertain era of coronavirus recovery begins, the need for such work will be significant, in Bristol and beyond. Finch sees complementary currencies as a tool that can make cities more resilient in the face of this economic strife, as well as help them become more equitable.

“I’m not even sure that growth is necessarily what we want,” she says. “This is a different experiment. It’s not about helping local businesses who are having liquidity problems to do business. This is much more about trying to change the nature of the culture and to create more resilient, self-sustaining communities.”

This story was produced by CityLab and is part of the SoJo Exchange of COVID-19 stories from the Solutions Journalism Network, a nonprofit organization dedicated to rigorous reporting about responses to social problems. 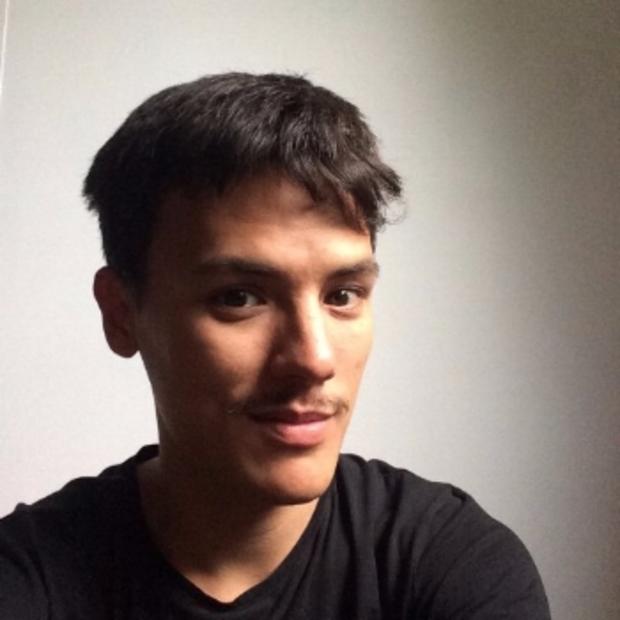 Peter Yeung is an award-winning journalist living in London.