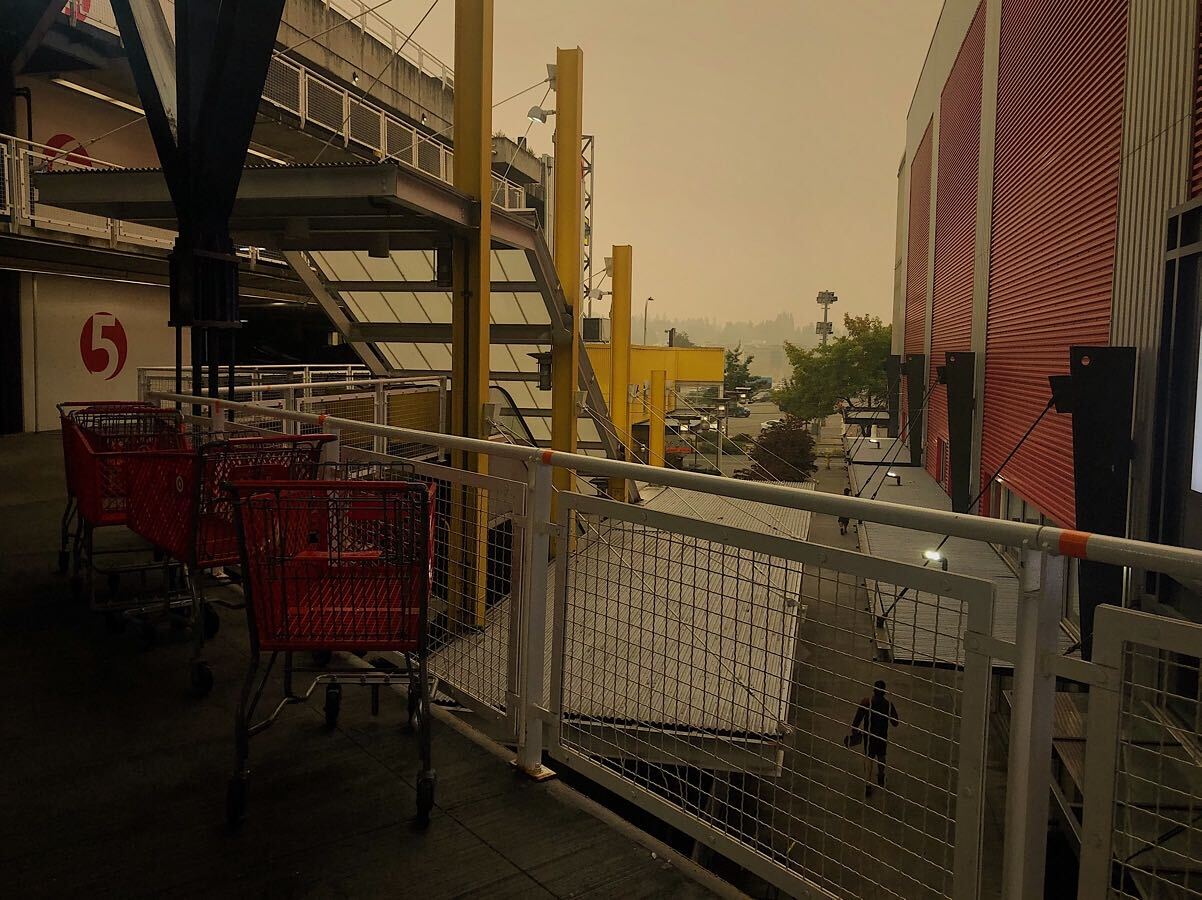 A yellow haze tinges the sky above a Target store in Northgate during a week of smoky air, Sept. 12, 2020. (Sarah Hoffman/Crosscut)

Over the last week, as wildfires raged across the West, people who had to work outside in the smoke-choked Seattle region complained of nausea, dizziness and employers who weren’t looking out for the health of their workers.

A woman in her late 20s who tends to plants and vegetables outside at Sky Nursery in Shoreline, just north of Seattle, said she felt ill after her shift last Thursday. After a couple of days off, the woman, who asked to remain anonymous for this story out of fear of retribution, said she and her colleagues decided to call in sick so “management would get the message we didn’t like the way they were handling things.”

She said even Sky Nursery cashiers have had to report to work and stand next to doors that are wide open.

Employees had the option to go home if they felt ill — without pay. That was too big of a sacrifice for some who couldn’t afford to miss any pay.

In the first weeks of September in the Puget Sound region, many employees — waitresses and waiters in outdoor seating areas of restaurants, farm workers, construction and landscaping workers, among others — faced two dangers: toxic air and COVID-19. Over the last week, air quality in Seattle has been among the worst in the world, hovering between a ranking of "unhealthy" and "very unhealthy," according to the Air Quality Index. Health experts say the effects from exposure to smoky skies could linger for months and even make some people more susceptible to the coronavirus.

The worker at Sky Nursery said she resents her employer putting her in harm’s way.

“The only factor in her deciding to stay open or not is how much money she makes,” she said, referring to the general manager. “It really seems like they don’t value us."

Another Sky Nursery employee, who also asked to remain anonymous, said she worked Saturday, which she described as definitely the “main offender” as far as unhealthy conditions are concerned.

She worked her full shift but was frustrated. Although she didn’t become violently ill, she could feel the smoke in her eyes and the effects of sinus pressure. Another worker went home because of a headache, she said. She worries about the residual effects from the smoke and wished Sky Nursery had been more caring throughout the smoke emergency.

“They should care enough about their workers to close the doors,” she said, while noting staying open only encourages others members of the community to step outside into the smoke-filled air. She said she spotted parents shopping for plants with kids or babies in tow.

“If you care enough about the community, make them stay home by closing their doors,” she said. “It does kind of feel like profit over people for sure.”

Another employee forced to work outside under the smoky skies was 47-year-old Ronnie Lalimo, who works at the Seattle-Tacoma International Airport as a driver for LSG Sky Chefs, loading meals to aircraft.

Lalimo said he hasn’t heard from the company regarding the unhealthy air but felt torn about reporting to work.

”I need to pay my bills, but also I know that it’s not good,” he said, noting that he has two teenagers at home.

In response to questions, LSG Sky Chefs said in a statement: "The safety and wellbeing of our employees are our highest priorities.  We provide our employees with personal protective equipment, including proper facial coverings."

"We will continue to work in conjunction with SEA-TAC International Airport authorities and local health officials to follow all recommended air quality safety precautions," the company said.

Joel Kaufman, a professor in the Department of Environmental and Occupational Health Sciences at the University of Washington, said federal and state regulations do not compel employers to do anything under current air quality conditions to protect employees.

Kaufman said he worries particularly about workers with respiratory problems: asthma, emphysema and other ailments. He said the smoke also can cause inflammation that is dangerous for people at risk for heart attacks.

Healthy people, Kaufman said, should be most concerned about smoke making them more susceptible to infection — especially in the midst of a pandemic. He warned this effect could linger for months, which is concerning given both the coronavirus and the upcoming flu season.

“As a long time and dedicated customer this really frustrates me. Please value the safety of your employees more. I was impressed with your COVID response, but this just seems careless,” one customer wrote.

In response, Sky Nursery said online that the managers of each department, in communication with their staff, discussed the options and chose to stay open.

“However, we are supporting any employees who prefer to stay home. Our indoor shopping areas and offices also serve as places for employees to get out of the smoke as much as they need to,” the company wrote.

In a blog post, Working Washington, a nonprofit advocate for worker rights, called on employers to have a plan to prevent workers from losing income if they stay at home.