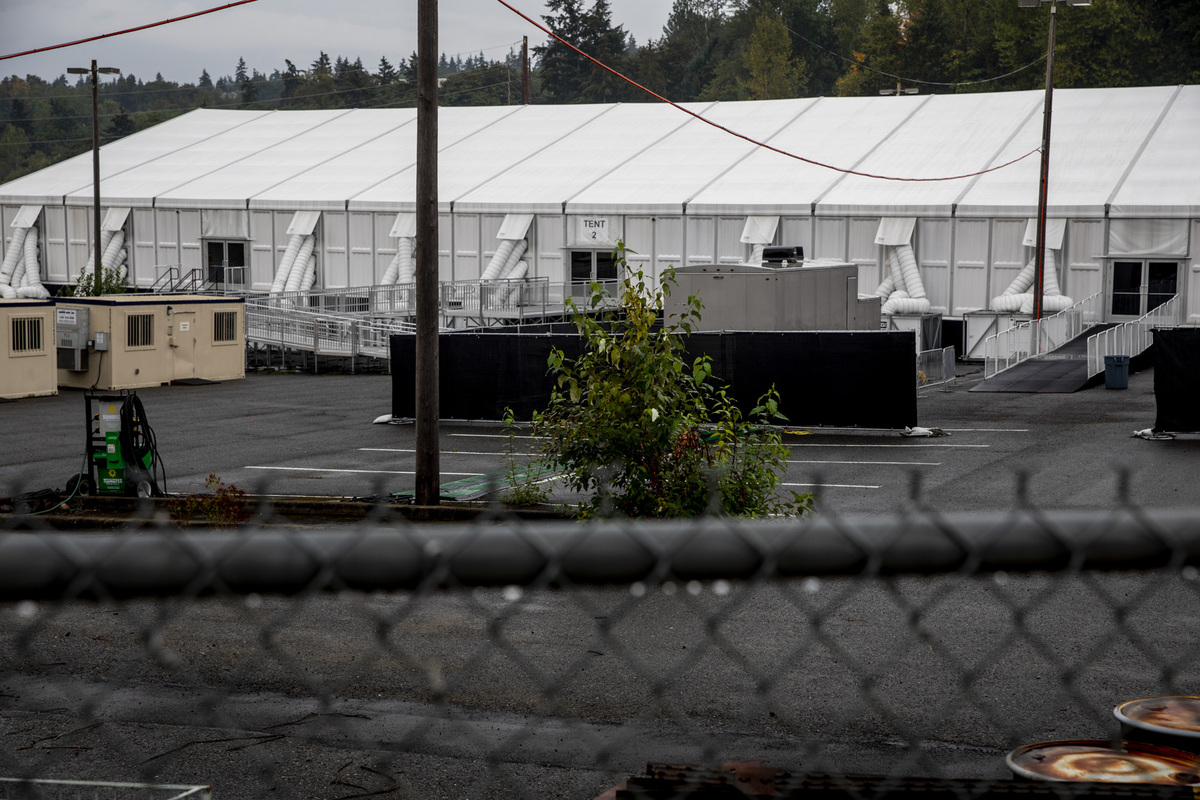 At the start of the COVID-19 pandemic, public officials in King County prepared for the possibility of widespread outbreaks in crowded facilities and overflowing hospitals. Of particular interest to officials were people who may contract the coronavirus and have nowhere to quarantine or recover — particularly those struggling with homelessness.

In response, officials opened several centers throughout the county, enough to house several hundred at a time.

One of those facilities, on a vacant property in Bellevue, cost the county around $4.5 million to build, plus an additional $25,000 a month in utilities, security and upkeep, according to records King County provided through a public records request. The idea was the federal government would cover the cost eventually, so long as it was used specifically for COVID relief.

Since that facility was completed, however, it hasn’t been used, at least not for its stated purpose. The National Guard housed about 170 guardsmen there for two nights during the tensest periods of this summer’s protests, but, to date, no homeless people have slept in the newly erected building.

That's a bit of good news: Homeless shelters have so far not seen the exponential spread of the coronavirus that some feared, and the recovery facilities have not reached capacity. For its original purpose — providing indoor space for COVID-positive individuals with nowhere else to go — the Bellevue recovery center was not needed.

There is still a need for additional temporary shelter in the area. Shelter capacity is stretched thin, and the recent  wildfire smoke rendered spending time outside more unhealthy than usual, resulting in calls from advocates for smoke shelters to protest people living without permanent shelter. But for a number of reasons the Bellevue facility has not been used to serve those needs.

For one, infrastructure set up in reaction to the COVID-19 pandemic faces funding requirements. If the county is to be reimbursed by the federal government for the construction of the Eastside facility, it cannot be easily used for alternative reasons.

“We would not have erected any of these facilities without federal COVID-specific funding and that funding does limit the things that we can use them for,” said Leo Flor, director of the King County Department of Community and Human Services.

More broadly, staffing has been a challenge for new, temporary shelters in the county. Service providers say their capacity to provide trained staff is limited, and the county is hesitant to advertise for work that may last only three more months, depending on funding models.

“It’s a very involved process to staff these things,” said Will Lemke, director of external affairs with Seattle’s Human Services Department. “It isn’t as simple as opening a big room and turning the lights on and off. You’re managing large groups of people who may not know each other who have a whole variety of needs that need to be met.”

Nevertheless, with at least 5,000 people living outside in King County, advocates have pushed local officials and private businesses to work harder to bring people indoors by using vacant space or empty hotels. A group of activists recently staged what they called the “Hyatt Hoax,” issuing a fake press release announcing that Hyatt was providing rooms to homeless individuals. Several people then protested in the hotel’s lobby.

“It’s not just about housing; it’s about people having the resources they need to live,” said Anna Humphreys, one of the organizers of the hoax. “We’re not seeing any of that getting better.”

In response to the public health hazards of wildfire smoke, Seattle and King County recently made used a site similar to the one in Bellevue, located in the city’s SoDo neighborhood. The local governments opened it to about 100 homeless individuals looking for a refuge last week. It closed for wildfire use on Friday.

Threading the needle to open that site was delicate, said King County’s Flor, and involved assuring the federal government that the cost of using it in response to wildfire smoke would be covered locally to avoid jeopardizing COVID-related federal reimbursement.

But William Parham, a formerly homeless man who was involved with the Hyatt Hoax, said many people he knows who still live outside — especially those in the LGBTQIA community — feel uncomfortable with the Salvation Army.

“They do not feel welcome in that space,” he said.

For local service providers, finding and maintaining enough well-trained employees have always been challenging. But the pandemic has made the picture even more complicated.

In a press conference last week, Jason Johnson, director of the Seattle Human Services Department, said Seattle Center was unable to open up more space for smoke refuge in its Armory building due to staffing constraints.

“We’ve got people who would regularly be in this workforce who are scared and are saying, ‘I’m not going to go into that place because they’re asking me to do frontline work with 100 individuals. That’s dangerous, I’m going to work somewhere else,’ ” said David Bowling, executive director of the Eastside’s Congregation for the Homeless.

“Even if the money is available, expanding services means needing the capacity to hire, train and supervise people,” he said. “The workforce of people experienced in helping people with behavioral health disabilities is not big enough, so it is tough to quickly staff up new operations knowing that you have to do a lot of extra training for people new to this work, and that bringing in experienced people means pulling them away from other activities that are already under a lot of strain.”

At the Bellevue facility, staffing has been an issue pretty much from the start. Back in April, in a question and answer session with Eastside stakeholders, county staff blamed “staffing logistics challenges that have led to the delayed opening of some of our COVID-19 Response Facilities, including Eastgate.”

Particularly challenging is that much of the emergency-related funding is time limited, which makes hiring even more of an issue because the county at this point can promise only three months of work.

It’s turned out not to be an issue in Bellevue; about 1,200 people have used the recovery centers, said Flor, and the spaces in SoDo and Shoreline have managed to handle the need.

But, Flor said, the county feels comfort knowing that if another spike in COVID cases occurs in the fall, the Eastside facility is ready for an overflow. “Despite all the complexity, it was worth it and we would do it again,” he said. “We might still need these sites.”

In the meantime, Parham and Humphreys, who were behind the Hyatt Hoax, said they’d like to see more urgency in finding space for people to move indoors. Parham said the initial flurry of activity around finding hotel space for homeless individuals was “remarkable.”

“Since that first act of compassion, the city has really limited shelter space and has not offered substitutions,” he said.

Humphreys said the demonstration at the Hyatt was not a success from the perspective of pressuring the hotel into accepting people that night. But it was successful in what it did to force a broader conversation.

“Our larger goal was … that people would see there are vacant spaces that could shelter people in the city and that are sleeping on the streets in spite of that,” she said.