The tribe seeks to stop gravel mining near a historic village and burial ground. The litigation could change the way tribal sites can be developed. 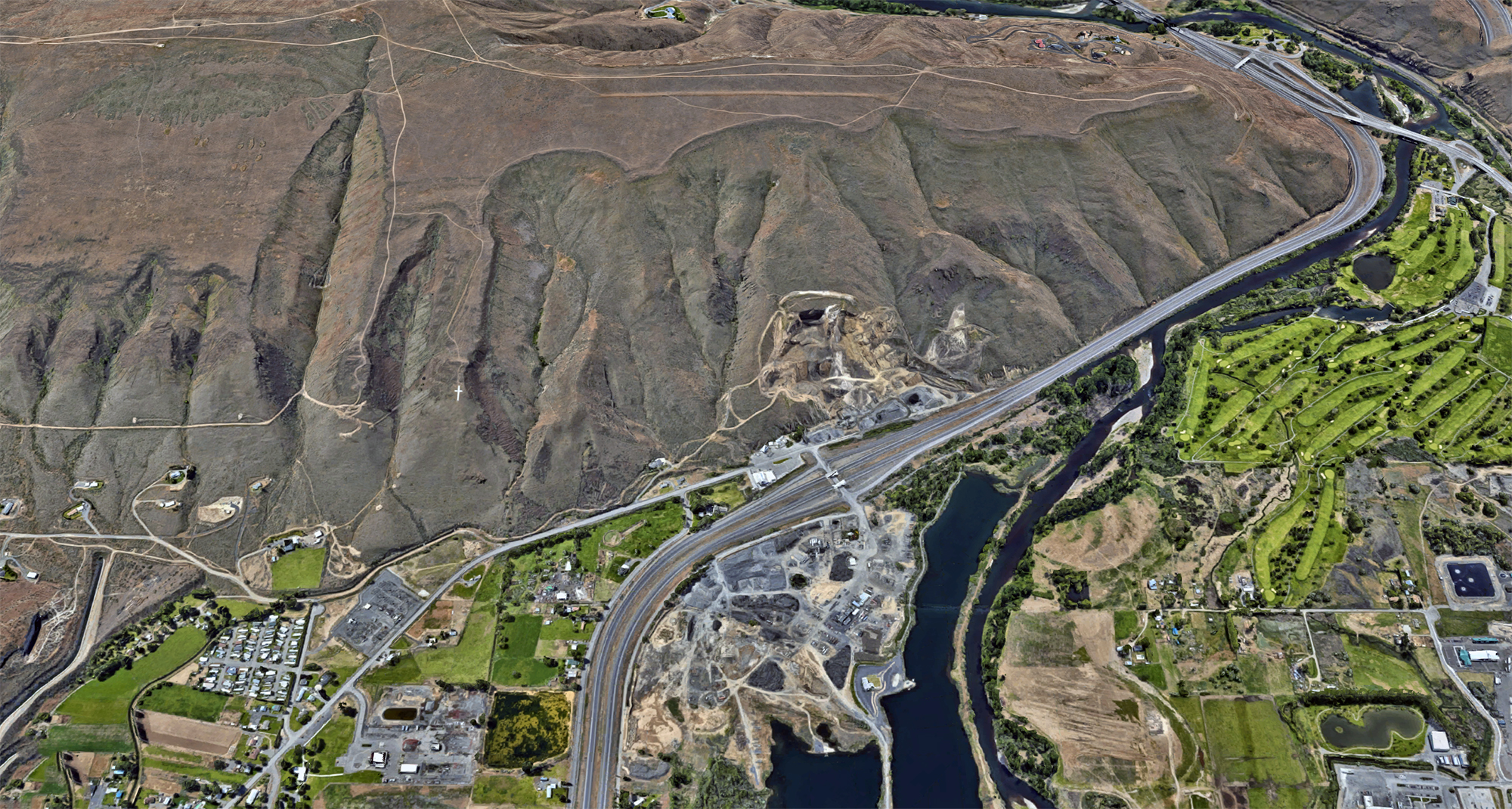 Granite Northwest wants to expand its existing gravel mine (center, in the hillside) in Selah further east. The proposal has drawn opposition from the Yakama Nation, which for five years has fought to keep the mine from expanding on traditional lands ceded to the government in the Treaty of 1855. (Google Maps)

A fight to protect a traditional Yakama Nation fishing village and burial ground could set a precedent for business development on traditional tribal lands across Washington state.

Wanapine village, which sits on a ridge in Selah, a small town bordering Yakima to the north, has been mired in the court system for years. The Yakama Nation has been battling Yakima County and Granite Northwest, which seeks to expand its gravel mine from 26 acres to more than 160.

Yakima County officials have twice approved the expansion, which the Yakama Nation appealed twice and then sued the county and the mining company in 2017. The case could spend several more years in court because of the complexity and cutting edge nature of the cultural resource protection laws being debated, according to Ethan Jones, the Yakama Nation’s lead attorney in the case.

The case dates back years before the lawsuit. In 2015, the Washington state Department of Archaeology and Historic Preservation notified Yakima County that the area contained talus pits and human burials, which Granite Northwest's contracted archaeologist also recognized. Based on three visits to the site, in 2000, 2008 and 2016, the contractor testified that a biface fragment and two flakes — prehistoric tools — had been found in the quarry and later lost during excavation.

“This is a groundbreaking case of sorts, and because it’s groundbreaking, we don’t have 40 other cases to point to where they’ve already made these arguments and been successful,” Jones said.

Brad Estes, Granite’s vice president of construction materials, responded to a request for comment with a statement saying the company could not respond further because of pending litigation.

“Granite is not mining at the location of a Yakama Nation historic village. In 2007, Granite acquired the existing Rowley Quarry, which had been in operation since the 1950s. Granite submitted an application to expand the quarry in 2015, which included protective buffers for any areas potentially of historical or archaeological significance,” the statement read. “On April 7, 2017 Yakima County made a final decision approving Granite’s quarry expansion which the Yakama Nation challenged in Yakima Superior Court.”

But after that 2017 decision, the Washington state Supreme Court in July this year ruled the Yakama Nation could proceed with the lawsuit. The ruling overturned a county court’s decision, finding that the Yakima County Board of Commissioners had not provided written notice of its final land use decision to the tribe.

George Selam, Yakama Nation cultural committee chairman and religious leader at the Toppenish longhouse, said the county action made him feel consultation with the tribe was not a priority.

“These decisions that are made to mine, it plays a major role to the Yakamas because we do have unmarked graves. We have historical landmarks there that we are trying to keep [under] protection,” Selam said.

They want those cultural sites to be left undisturbed, but they expect the impact of mining on the tribe’s traditional lands that were ceded to the government would be significant.

While Wanapine is the subject of this litigation, it is not the only historic village on ceded lands that the tribe wants to protect. Yakama Nation villages and unmarked graves extend past the site where Granite Northwest seeks to mine, Selam said. These sites are sprinkled along a ridge continuing south toward Union Gap and throughout the Yakama Nation’s traditional territories. Those sites are kept undisclosed outside of the tribe to protect them, Selam said.

“Each area has a significant cultural resource and historic landmark to it, but that's something that's undocumented and that's also an area where a lot of us internally — especially as [tribal] members – we keep within ourselves,” Selam said.

The Treaty of 1855 ceded 11 million acres to the federal government from Washington area tribes, covering land that makes up about one-third of the entire state. Fourteen tribes and bands were then confederated into one: the Yakama Nation. While the treaty allowed the Yakamas to govern their own 1.3 million acre reservation and retain tribal rights to fish, hunt and gather food in the ceded lands, they lost their rights of direct ownership of that acreage.

But that doesn’t mean they gave up their rights to its ancestors or cultural resources, Yakama Nation lawyer Jones said, and there is nothing in the treaty that gives up that right.

And while this case is unique, the fight to preserve historic Native resources and burial grounds are not. One of the more well-known cases in the United States was the Kennewick Man, or Ancient One, whose remains were found in Washington state along the Columbia River in 1996. The Ancient One was one of the most complete prehistoric skeletons ever found and was thought to be closely related to the Colville tribe.

While Native remains must be returned to tribal groups, according to the federal Native American Graves Protection and Repatriation Act of 1990, history has shown that return is not always immediate –– or easy.

After years of litigation as to who retained rights to this subject of intense scientific study, the Kennewick Man was returned to a group of Native tribes, including the Yakama and the Colville, for reburial in 2017.

Of Washington’s more than 27,000 archaeological sites designated by the Department of Archaeology and Historic Preservation, a majority are Native American, according to Allyson Brooks, state historic preservation officer at the department.

Brooks said Washington’s tribes are very active in protecting cultural resources, in part also because they have treaties that work to protect interests in lands they have ceded to the government.

Brooks' department works directly with the tribes, and daily communication with tribal representatives is the norm, she said. The department has a consultation process, which differs depending on the project.

She said it’s important to note that the tribes tell the department where they want to see permits, not the other way around.

“I do think there's a misconception that the tribes somehow aren't organized or have the technical support to be archaeologists or to manage archaeology and that couldn't be farther from the truth,” Brooks said. “There are tribes like the Colville, who have more archaeologists on staff than the state of Washington.”

But Jones said there is very little precedent in Washington law to protect these sites and much of the responsibility falls on the Department of Archaeology and Historic Preservation to enforce. This case is essential in making sure those laws are enforced, he said.

“We are trying to establish teeth in these laws that the Washington state Legislature has already passed to protect sites exactly like this one,” Jones said. “Hopefully we are forging a trail that other nations can follow to protect their cultural resources from desecration.”