Inmates with mental illness are illegally stuck in WA jails

The pandemic has made a bad situation worse: a backlog of people in jail who shouldn’t be. 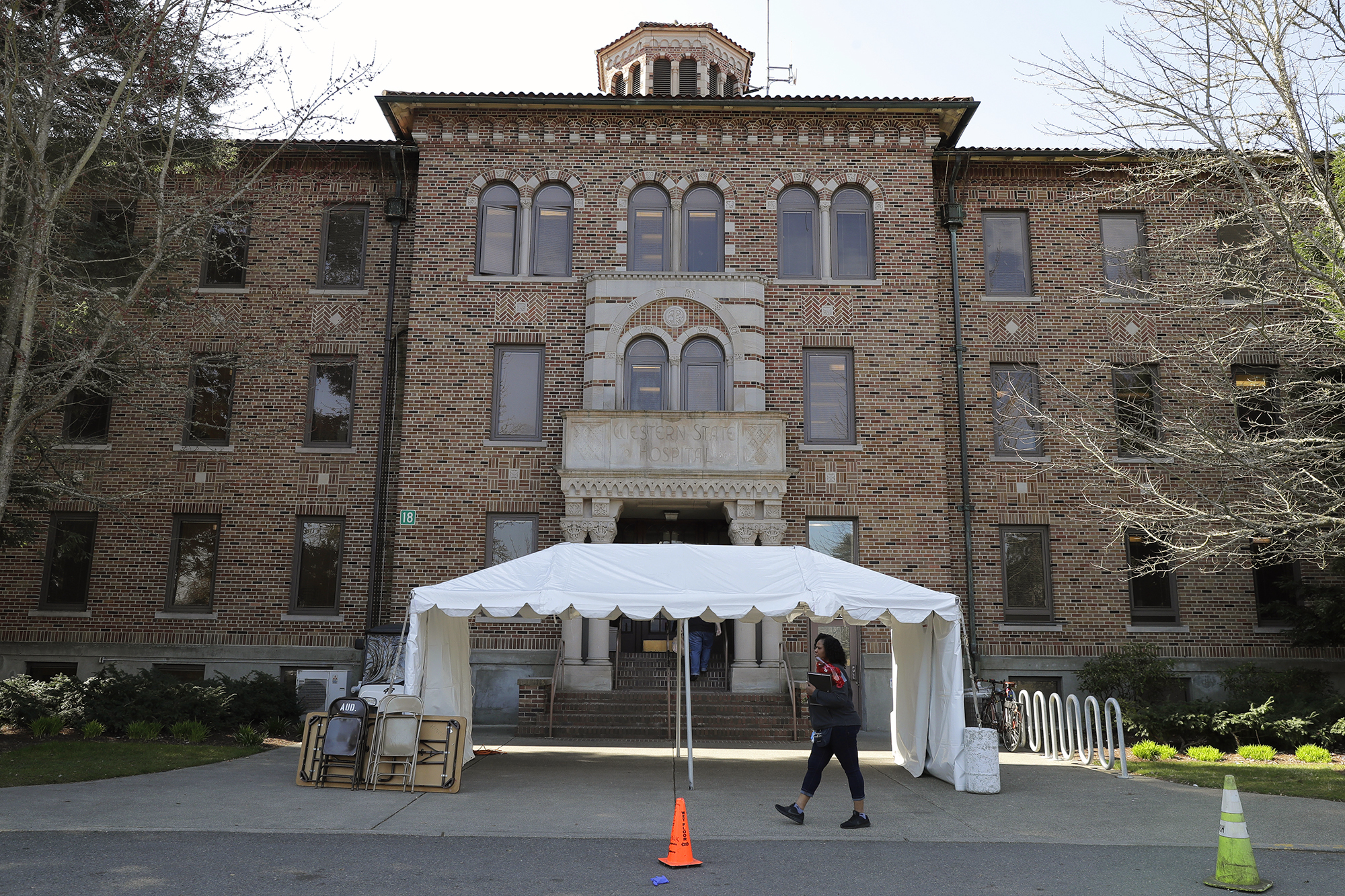 In this March 19, 2020, file photo, an employee walks near an entrance to Western State Hospital in Lakewood. (Ted S. Warren/AP)

The pandemic has continued to exacerbate Washington state's struggles to address mental illness in pretrial jails. The result is that, over the past seven months, inmates determined to be unfit for trial are experiencing long and possibly unconstitutional stays in what attorneys say amounts to solitary confinement.

At last count, 161 people deemed too mentally ill to stand trial are waiting in county jails across Washington, despite legal requirements that they be quickly transferred to a hospital. Roughly 200 other defendants are waiting outside of jail. The result is a likely worsening of their condition and a longer road back to true rehabilitation, attorneys say.

The state has never fully complied with a 2015 federal court decision, known as Trueblood, to quickly provide inmates with mental illness treatment before they stand trial. But since the beginning of the pandemic, that poor compliance record has worsened, as the list of incarcerated people waiting to be transferred grows.

If a person is found to be not competent to stand trial, they must be transferred for so-called "competency restoration" — treatment to help them understand the charges against them — at a mental health facility within seven days of the determination. Before this year, that requirement was met just 24% of the time on average, according to state data filed in federal court — well short of the requirements the court set out.

But since the start of the pandemic, that number has plummeted to below 7% — and in some months as low as 2%. Out of 753 orders for treatment between February and August, only 55 people were transferred within the required timeframe. In May, only one of 58 inmates deemed not competent to stand trial was transferred for treatment in time.

For the rest, their attorneys have been routinely warned that it could be months before their clients were moved to a facility for competency help. Quarantine protocols at state hospitals, combined with COVID-related construction delays, caused the monthslong bottleneck over the summer.

“Frankly, just looking at it, you know it's got to be a living hell for the folks who are there and for their families,” said Mary Kay High, chief deputy of Pierce County’s Department of Assigned Counsel.

State officials say admissions are improving, but they are still experiencing what Nicholas Williamson, an assistant attorney general, called during a recent court hearing a "COVID hangover." The net result is a story that’s familiar in the days of the pandemic: an already failing system made worse by COVID-19.

"We have hundreds of people who are waiting in jail to get into treatment," U.S. District Judge Marsha Pechman told the state at a court hearing in August. "I've expressed before that hospitals should be able to respond to patients it's supposed to treat. I understand COVID is a problem, but you've got to do better. There are too many people who are deteriorating in custody."

Debbie Kirby knows what her clients have gone through because she's been through it herself. Struggling with addiction and in an abusive relationship, Kirby saw her physical and mental health deteriorate. In what she believes was an effort to exert some control over her life, she turned to frequent shoplifting and was arrested numerous times.

For Kirby, this was all years ago, before a court demanded the state address mental illness more quickly. But had it been today, Kirby said, she believes she would have landed in the class of people for whom being held in jail for long periods is unconstitutional.

Kirby now works as a peer specialist for people discharged from a state hospital or jail, helping them establish themselves and gain independence. The work reminds her of her own struggles, and she sees the impact that jail time can have on someone with mental health challenges.

"They isolate the very mentally ill, and they're in cells and are in 23-hour lockdown," she said. "It only exasperates [their illness]. It makes it worse. They get more psychotic, more depressed."

The 2015 Trueblood decision put the weight of the federal judiciary behind an intuitive reality: staying in jail makes mental illness worse. Keeping people waiting to receive mental health services is unconstitutional, Pechman concluded — a violation of their constitutional right to due process. The state was given 14 days to evaluate inmates and seven days to transfer them to a hospital for treatment.

Even in its best month in the past five years, the state transferred only 41% of inmates in time. Generally, the number has hung in the 20% range or lower.

"I have yet to, in my practice, have somebody transported within the time limits of Trueblood," said Cassie Trueblood, an attorney whose last name has become shorthand for the broader case. "Zero people."

But since the onset of COVID-19, both Eastern and Western State Hospitals have struggled to contain the coronavirus, slowing admissions or even cutting them off completely. According to Dr. Thomas Kinlen of the Washington State Department of Social and Health Services, the two state hospitals Currently have two positive cases each. Western had a larger outbreak earlier in the pandemic.

At the same time, 40 new beds at Western State Hospital were delayed by the governor's orders halting construction. Even since that order was lifted, construction crews have not reached full capacity.

In an interview, Kinlen said the state has started to increase admissions again to the hospitals, an improvement from when they were all but closed. But it's delicate. New patients must quarantine and the number of people allowed in a given ward is much fewer in orrder to enable social distancing. When new cases crop up, the state is forced to again slow admissions.

"It's a little bit of a stop/start, if you will, to make sure we don't have a large outbreak at either hospital," said Kinlen.

Earlier this year, wait times for some inmates were as high as six months. That number has come down recently, but for attorneys with clients in jail, the whole system remains wildly unpredictable.

"Prior to COVID, you could predict 30 to 50 days to get your client admitted," said Sarah Tofflemire, a public defender with Pierce County. "But now it's completely unpredictable because you'll get an estimate that's six months, and they might get a bed sooner than that or they might not."

The effects of the delays can be catastrophic on the inmates’ health. Jails are not equipped to provide treatment or support for people with mental illness. Often, say attorneys, their clients are separated from the rest of the jail population, which can result in near-total isolation for up to 23 hours in a day.

Even for those who have been released from jail while they await trial, the long delays are hard on their families, who are usually ill-prepared to handle the severe disabilities of their family members.

For a system that's theoretically intended to rehabilitate people, it makes the path to recovery longer, said Carney, the attorney.

"To me, it’s destructive to everyone involved. It's destructive to the people in a mental health crisis, and it’s worse for society because it’s going to be harder and more expensive to give them treatment to bring them up to a baseline," he said.

After Ronni Batchelor spent time in jail, she retreated inward, isolating herself even further than she had before. Batchelor was diagnosed with borderline personality disorder at a young age and became addicted to medication, as she dealt with chronic pain. She spiraled downward, she said, and became homeless for a time.

A self-described "fighter," she got into trouble for reacting "to whatever was put in front of me at the time," she said. "When you're homeless, it's either fight or be killed when you're a woman out on the street."

"If your mental health isn't stable and you're not able to wrap your head around it, you can lose yourself," she said.

Decades after her first arrest, Batchelor is now a peer support specialist, similar to Kirby, drawing on her personal experience to help those exiting the system.

In the years since the federal courts handed down the Trueblood decision, the number of people eligible for competency treatment has increased dramatically, said DSHS’s Kinlen — from about 3,000 in a year to closer to 6,000 now. Kinlen couldn't say with certainty why that's the case. But the result is a treadmill of sorts where just avoiding going backward takes enormous effort. Constructing new beds is never going to catch up with demand, at least not at the current pace in the current system.

The solution, then, comes back to the larger discussions unfolding in the wake of the summer's protests: What will it take to cut out jails and law enforcement from the mental health system entirely? As part of settlement related to the Trueblood lawsuit, the state is required to invest in upstream alternatives. The efforts are rolling out in phases, county by county.

One new program is from DSHS. So-called "navigators" are assigned to people found not competent to stand trial to help them both through the court process and, when they are released, connect them with necessary services.

"If we are able to stabilize their lives and get them wrapped with the services they need, this will reduce their recidivism and reduce the number of people coming through the competency system in the state of Washington," said Jason Karpen, the administrator of the new program.

Transferring people with mental illness to state hospitals is vastly preferred to keeping them in jail, but attorneys acknowledge that such transfers address only a person's symptoms. It is common for the same people to cycle through the system multiple times.

The only real option, attorneys say, is to jam the revolving door.

“The only way this problem is ever ultimately going to be solved,” said Carney, the attorney, “is by creating better supports for people in the community and diverting them out of the criminal system in the first place.”