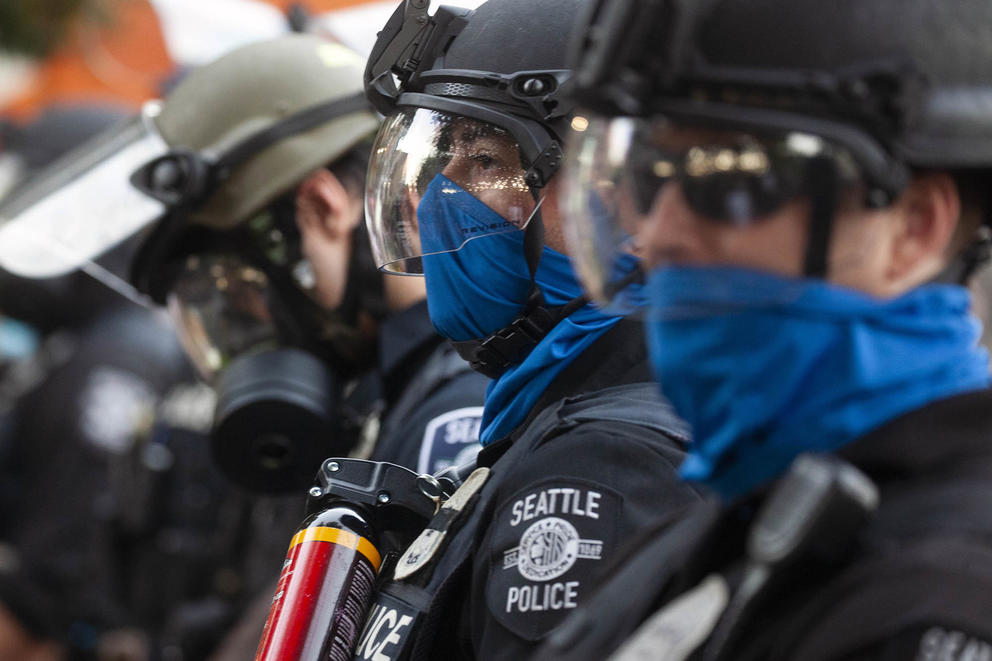 The basic tenets of this summer’s protests against police brutality enjoy wide support in both Seattle and King County more broadly, but voters are still largely unwilling to commit to dismantling or halving law-enforcement budgets, according to a new Crosscut/Elway Poll.

More voters than not in both Seattle and King County support diverting funding away from police agencies and toward social services and community programs — one of the central demands of protesters throughout the summer. That support is particularly strong in Seattle, where a majority — 54% — favor the idea and only 38% oppose it.

However, across the city and county, just 20% of voters support cutting police funding by half. Slightly more support rebuilding the police force from the ground up, but 58% and 63% of voters still oppose the idea in Seattle and the rest of King County respectively.

The poll conducted Sept. 26 through Oct. 1 sampled 200 voters from Seattle and 200 from King County. Each subgroup has a 7% margin of error at the 95% confidence level, which means that if the survey had been conducted 100 times, the results would be within 7 percentage points of the results reported here at least 95 times.

The survey comes at a pivotal moment for the future of policing and public safety, which protests have forced into the public sphere in a way not seen for decades.

Seattle has come to symbolize the tensions that come with that debate — locally between the Seattle City Council and Mayor Jenny Durkan, and nationally as a bogeyman for right-wing politicians like Donald Trump.

For the elected politicians, it’s uncharted waters. When the current slate of council members was elected, it was with an eye toward the issues of homelessness and corporate influence, not policing. Before the last election, just 10% of voters said policing was their No. 1 concern and 52% approved of city government's handling of reform, according to a Crosscut/Elway poll from that time.

The police reform approach that received the most support in the most recent September-October poll could be categorized as basic reforms without blowing up the entire system. Roughly three-quarters of voters across Seattle and the county favor keeping the same number of officers but focusing more on training, de-escalation and using less force. 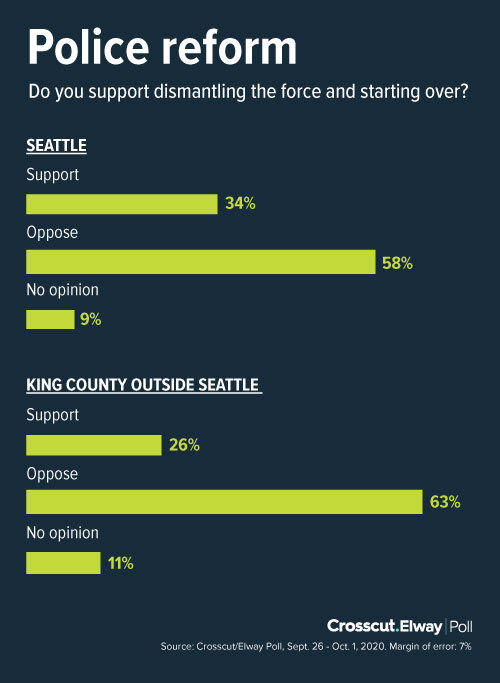 Views of law enforcement vary significantly between Seattle and the rest of King County. While only 44% of Seattle voters said police were doing a good or excellent job, that number jumped to 69% in the county.

Similarly, 60% of Seattle voters said police treat white people more favorably than people of color, compared with just 35% in the rest of the county. Fifty-four percent of Seattle voters believed that instances of police shootings and excessive force are the result of systemic racism in departments and not the result of a few bad apples. In the county, that number is just 41%.

The results of the survey show that neither Durkan nor the city council is very popular. But the council is particularly unpopular — nearly three quarters of respondents gave the legislative body a negative rating, with 44% saying members were doing a “poor” job. Just 21% said the council was doing a “good” or “excellent” job.

Twenty-four percent of voters, meanwhile, said Durkan is doing a “poor” job, and 33% said she is doing “only fair,” which is considered a negative opinion. Thirty-eight percent said she was doing “good” or “excellent.”

Because of the relatively small size of each subgroup, the plus-or-minus 7-point margin of error for each is relatively large.

As a result, certain measurements — including voter opinions of elected leaders — could change significantly from poll to poll. However, the comparisons contained within the survey — between Seattle and King County; approaches to police reform, and Durkan and the council — offer a useful illustration of how opinions and geographic areas compare relative to each other. 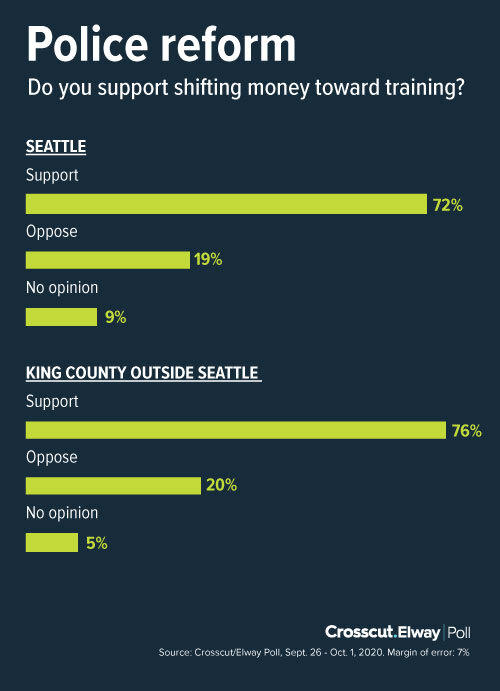 Tom Malen of Kenmore, who participated in the poll, believes that there probably are some prejudices in policing, but that much of those can be traced to broader inequities.

“You look at the statistics and minorities are much more underpaid and underprivileged than the white population,” Malen, a 68-year-old retired construction manager, said. “I think if it was more equal, there wouldn’t be that bias to [police].”

He doesn’t support defunding the police or cutting their budgets in half and actually thinks his area could use more officers. At the same time, he’s not opposed to funneling some money away from police to support better social services.

“If you did defund, you would have to put it more towards mental health or homeless help or social programs, that kind of stuff, to kind of help balance it a bit,” he said. “I don’t think buying more military arms is really going to help the situation.”

Christine Droker, a first-grade teacher living between Green Lake and Phinney Ridge, feels similarly. “I don’t think defunding the police is the answer,” she said. “I think there certainly are things that we need law enforcement officers for. But I also think there are plenty of things they get called for that they aren’t trained to do or that a law enforcement person shouldn’t respond to.”

Droker said she’s been frustrated lately with the rancor in City Hall. She sympathizes more with Durkan, in part because she feels the city council has become too far to the left. Seattle Police Chief Carmen Best’s high-profile exit over the summer particularly angered her.

“There’s a lot of positioning and posturing that is happening, but not a lot of conversation with people from different perspectives and different points of view,” she said.

On the other end, Jessica West, 56, of Ravenna, said the last few months have made her believe reforming the police isn’t possible. The Seattle Police Department’s response to the protests in particular “has tended to make me move away from the sense that reform of the police department is possible and toward a sense that we need to really defund the police — because I had not realized they’d become so militarized, so dangerous, so intractable, so radical — and move toward different solutions for how to address some of the societal ills,” said the University of Washington School of Law staff member.

West said she was angered by Durkan’s veto of the city council’s cuts to the department and regrets her vote for Councilmember Alex Pedersen.

So far, the Seattle City Council voted to cut about 100 full-time positions from the police department’s 2020 budget — overriding a veto from Durkan to do so.

The mayor recently proposed her budget for 2021, which included cutting about $20 million from the police and moving 911 services, parking enforcement and emergency management into civilian departments. She has also proposed investing $100 million in community organizations, but not at the expense of police.

The council will have its chance to amend her budget and chart its path forward on public safety.