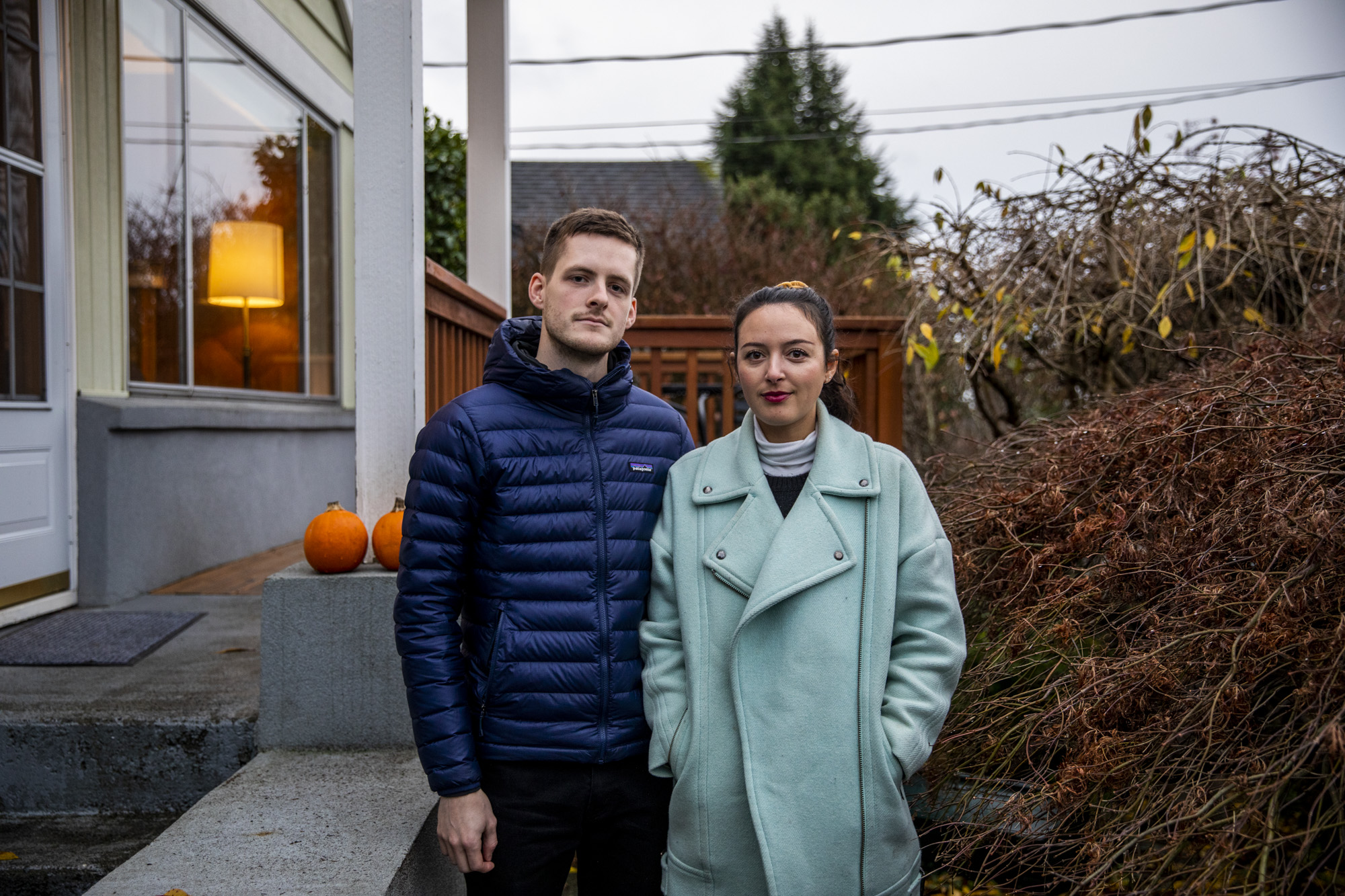 Sorayya and David Dossett outside of their Ballard home on Nov. 24, 2020. The couple plans to eat outside and distanced from their family this year for Thanksgiving. (Dorothy Edwards/Crosscut)

Sorayya Dossett is pretty sure she already has had COVID-19. The 32-year-old motion graphics designer and Ballard resident was still commuting at the beginning of the pandemic when she noticed strange lesions on her toes.

Although she also suffered from more common symptoms of the virus, such as a fever and a cough, it was the so-called COVID toes that convinced Dossett of her ailment. Still, like thousands of others in the Pacific Northwest and across the country, Dossett is doing things differently this pandemic Thanksgiving.

Instead of eating Thanksgiving dinner inside, where the risk of being infected by the virus increases, Dossett and her husband plan to drive to her parents’ home in Kirkland to eat on a deck above the garage that she described as “covidfied”: tables set far apart, space heaters and umbrellas. They hope eating earlier in the day will keep the cold at bay.

Dossett’s family is joining the many in the region who are getting creative with their Thanksgiving celebrations and prioritizing health. Both Washington Gov. Jay Inslee and the Centers for Disease Control and Prevention have urged Americans not to travel or gather with anyone outside their households this year.

Whether Dossett’s 97-year-old grandmother — whom she’s seen only from a window or while wearing a mask and standing outside 20 feet away — will come to the family’s outdoor dinner remains a question. The holiday could prove especially difficult for her, Dossett said, since she lost her husband a few years ago and even at her age likes to cook big family meals.

What the family has settled on is leaving the cooking to someone else this year. Asked whether there was ever any disagreement about the plan, Dossett said she sometimes has to put her foot down with her very social parents.

“I feel like I've kind of been the parent during this time, and I have had to scold them for kind of being a little bit too risky sometimes,” Dossett said, noting her parents have no issue with wearing masks but have had more outside gatherings than she would have liked.

“My mom had breast cancer a few years ago,” Dossett explained. “I am very paranoid.”

Thanksgiving will look very different for some families in 2020, with many weighing the risks of traveling and gathering during a pandemic. (Herrmann Family)

Thanksgiving will look very different for some families in 2020, with many weighing the risks of traveling and gathering during a pandemic. (Herrmann Family)

Deawn Herrmann, 52, of Vancouver, Washington, is doing all the cooking herself, squeezing it in at night, since she is plenty busy working during the pandemic as a long-term care ombuds.

Herrmann is enlisting her husband and son to make the two-hour drive to her mother’s home in Junction City, Oregon, to deliver all her holiday favorites. Herrmann said her mother has dementia and is no longer as capable of cooking.

“I can't leave them without food. That would just break my heart,” Herrmann said of her mother and her mother’s husband. “It's bad enough to not be together.”

She doesn’t see her mother right now because of the COVID risk. She’s hoping to make up for that by sending a little piece of home. But Herrmann isn’t stopping with her mom. She’s also delivering food to her nephews in Hillsboro, Oregon, southwest of Vancouver. After all the deliveries are finished, Herrmann and her husband and two sons, one of whom is quarantining in Tacoma so he can come home, will sit down to eat on Thursday.

Over on Mercer Island, 73-year-old Sandra Lindstrom, a retired high school math teacher, plans to take the cars out of the garage and set up some appropriately socially distanced card tables for her children: a daughter who works at a medical spa and a son — an ambassador for local company Theo Chocolate.

Like Dossett, she is leaving the cooking to someone else: a local supermarket.

“I decided what the heck,” Lindstrom said.

Still, others have already celebrated Thanksgiving with family this year, complete with Zoom and pizza.

Jeffrey Hulten, 45, has an 18-month-year-old who is keeping him and his wife busy. So the Lynnwood couple shared a meal with the in-laws on Sunday.

“We had plans to do stuff, and then we were just like, yeah, no, we’re going to punt,” Hulten said.

Hulten, a software engineer, said that once COVID-19 cases started to spike in the region, his family decided they no longer wanted to get tested and risk a false negative or contribute to the overcrowding of testing sites.

“Hopefully, we’ll be able to start to see the numbers come down soon enough where we can maybe make a different plan in December,” Hulten said.

For now, Hulten will have to go without seeing his father, who is in his mid-80s.

“It's always going to be a risk of which Thanksgiving is the last one,” Hulten said of his dad. “But at the same time, we don't want to be the cause.”